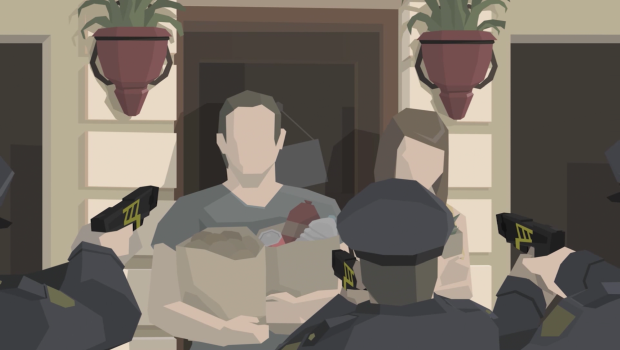 Two cops have died at the scene. That’s all I get: a notification that the officers I dispatched not only failed to stop the hostage crisis, but were killed in action by a hail of bullets. There’s little pomp or circumstance, just a notification. I sigh, neither the first nor last during my day’s play session with This Is The Police. This is a taxing game, one that grates on my patience and wears down my idealistic hopes.

Yet this disaster opens up opportunity. I can delay one’s KIA paperwork, getting the funding I need from a dead cop’s paycheck to afford better training for their replacement. The other was African American, and City Hall had just demanded I release all black officers from duty. I’m heartbroken, but have found an out where one didn’t exist. There’s subtext in that, but This Is The Police doesn’t want to address it, and that might be its greatest downfall.

The writing is un-apologetically noire, and goes a long way towards building up the city around you.

At the outset, This Is The Police is indie in all the right ways. A stylish, moody game placing you in the shoes of a police chief with 180 days until retirement, you’re faced with a classic conundrum: stay quiet and keep the order, or make your money before they give you the boot. With little in the way of pension or retirement plans, you need a half-million in your bank account before your days are up; that is, if you make it that far.

You can make that nest egg in several different ways. You could play by the rules, listening to the mayor and keeping a low profile, getting some raises and hoping you eventually reach the perfect number. You can also play for keeps, by getting involved with the seedier edges of the city. The mob could always use some more informants, and they’ll always have some. Why should you be left out of the fun?

The story plays out in graphic novel-esque panels, heightened by a distinct noire style and some beautiful minimalist designs. Reminiscent of Square Montreal’s line of GO games, edges are sharp, with details limited to the bare necessities and flattened, matte textures replacing finer details. Choices play out in Telltale fashion, though they rarely seem to make a difference; an early decision has you choosing whether to work for the mob or not, and despite my willing (even enthusiastic) cooperation, later narrative bits gave the impression that no matter what, your protagonist Jack Boyd would have little actual say in the matter.

Choices are intriguing, but rarely seemed to make a difference.

However you make your cash, you still have to report for duty each day, and this is where This Is The Police goes from graphic novel to full-blown management simulation. Each day, you’ll be faced with any number of crises, and with only a limited number of officers and detectives, you will have to suss out the best manner to handle them all.

This Is The Police shines in the moments where you have to make crucial decisions, the tepid moments of choosing the right officer for the right job. Professionalism and energy are recorded like a score, while factors like alcoholism and a penchant for underperforming play in a lesser manner, all culminating in a single card for each officer. At the end of the day, you make the call: do you send the rookie in by themselves knowing they could fail or even die? Or do you send along a veteran officer to ensure success and professional growth, while risking a lack of personnel for crimes that occur in the meantime?

Sadly, these moments get slowly beaten to death over the course of the game. If those shining moments are This Is The Police’s best, the tedious repetition of each day is its worst. Days blend into each other, and any notion of drama is lost in the dull repetition of each work day at police HQ. Despite introducing a number of systems and ideas, This Is The Police struggles to elevate its gameplay loop above menial tasks, and often, it feels designed to intentionally force you into a series of Sophie’s choices. The concept of this game works much better when gameplay mechanisms and turning cogs are obscured as much as possible.

My favorite tutorial prompt of the year so far.

The many systems of This Is The Police are impressive, however. Besides addressing citizen concerns and dispatching officers, you will have to juggle mob wars, city hall agendas, budgeting concerns and actual litigation. This Is The Police plausibly depicts the bureaucratic web a police chief might find themselves tangled within, and the layering of these systems is steady enough to not overwhelm. Investigations were a particularly wonderful distraction, as analyzing photographs and piecing together solutions to crimes was a welcome change of pace, even if relatively simple.

Perhaps the most frustrating thing about This Is The Police is that it constantly verges on saying something important, while doubling back on it halfway through. The issue of ludonarrative dissonance tends to rear its head frequently; despite playing a completely corrupt police chief, my character often viewed himself as a champion of the people and an unwilling participant in the gang conflicts of the city. The game touches on many hot-button issues, between surges of feminism and racial conflict, the role of peacekeepers, and corruption within a city.

As the mob war escalates, it might be wise to get invested.

This Is The Police gets there, and staring down the abyss, it can’t bring itself to commit. To make a lame reference, it is Frodo at the precipice of Mt. Doom, unable to cast the Ring into the lava. Meanwhile, I was Samwise, begging the game to make the final plunge, to at least say something about the role of police, about corruption or brutality, racial profiling or any other issue commonly found with peacekeepers in society.

Instead, it dodges, refutes itself and tries to stand in apolitical “moral greys.” I appreciated This Is The Police for the way it presented a living city. Much like The Wire, it’s a stark portrayal of mass communal living in concentrated areas, and the way that folks get by in cities. I saw the good and bad of people, the ups and downs. No one was wholly good, but no one wholly evil. Everyone is just trying to live, often in the only way they know how. I wish This Is The Police would make a greater commentary, that it would have a concise idea and present it with the same fervor it presents its systems and management mechanics. It misses that mark, but it at least makes the effort to start a conversation.

This is the Police

This Is The Police is a challenging portrayal of law enforcement that falters when it comes to meaningful commentary. While it constructs a good form and addresses topical concerns, it fails to say anything definitive. Starting a conversation is worthwhile, but that only carries the game so far before its menial nature drags it down.

I'm a Texas native and graduate of Texas Tech University, freelancing in the gaming journalism industry. I love games, live music, Texas BBQ and sports. Favorite games are The Witcher 2, anything from Bioware, the Kingdom Hearts series and Dota 2.
Related Articles: This is the Police
Share
Tweet
Share
Submit