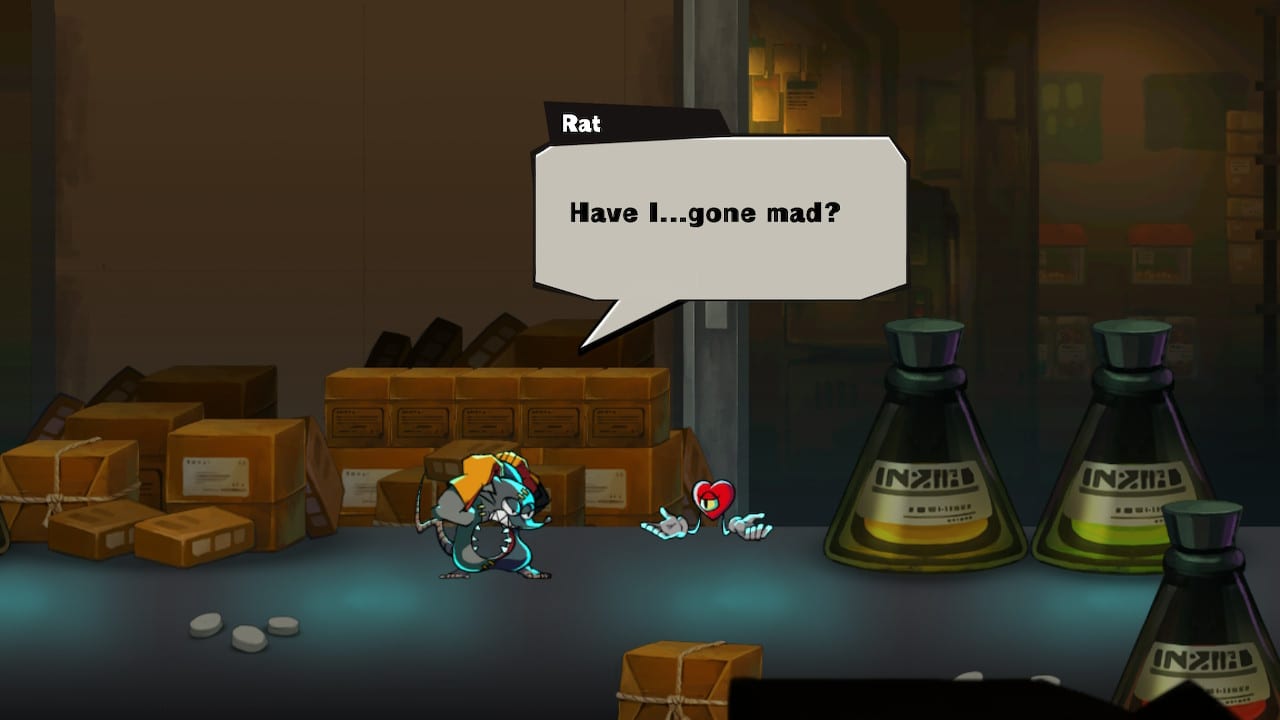 It’s always a treat whenever you play a game that feels like it’s made just for you. The first time I had this experience was probably the original Katamari Damacy (which shaped my gaming formative years), and I’m happy to say that Nippon Ichi Software’s Mad Rat Dead is one such title. While it might not be for everyone, it’s a platforming-music game that’s a match made in rhythm heaven, and I loved every second I played of it. 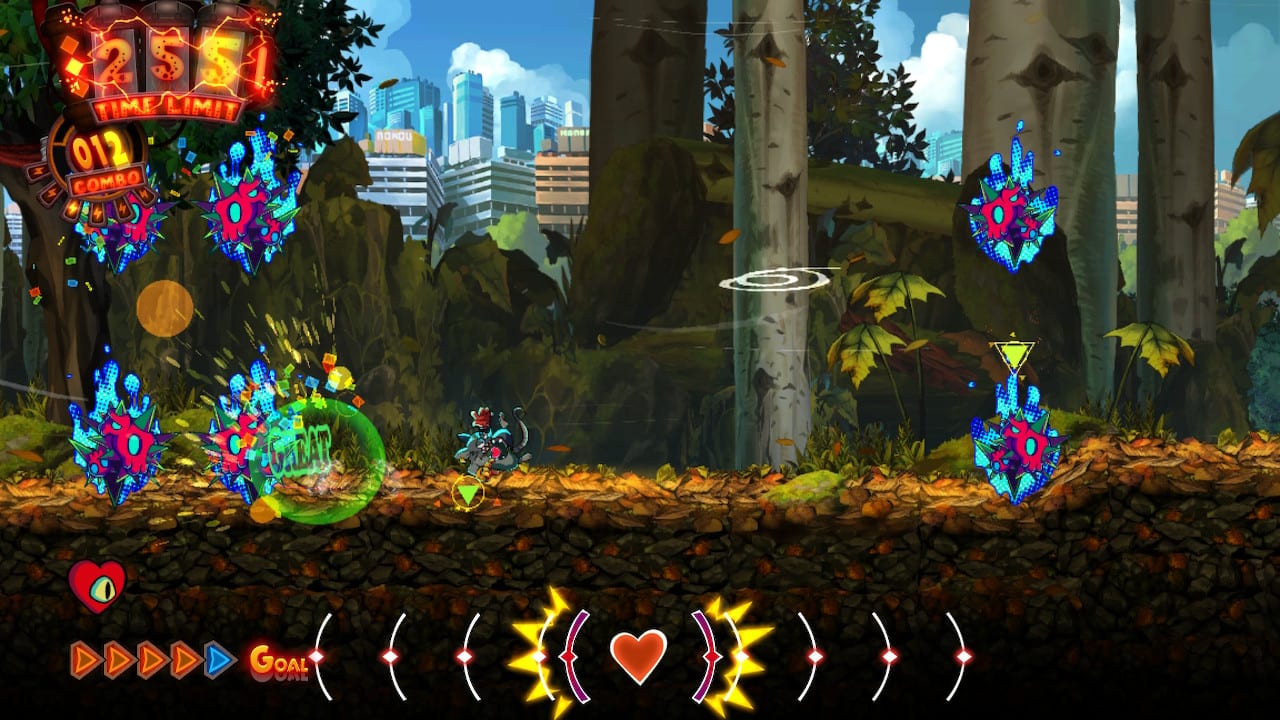 In Mad Rat Dead, you assume the role of the titular Mad Rat, a lab specimen that recently passed away due to experimentation. Thanks to the blessings of the Rat God, he is revived and allowed to relive his last day on earth, with the condition that he will die at the end of it all. Thankfully, his Heart becomes a sentient being (as well an aptly named character) and the two decide to follow Mad Rat’s ultimate goal: to exact revenge on the professor that tortured and killed him. 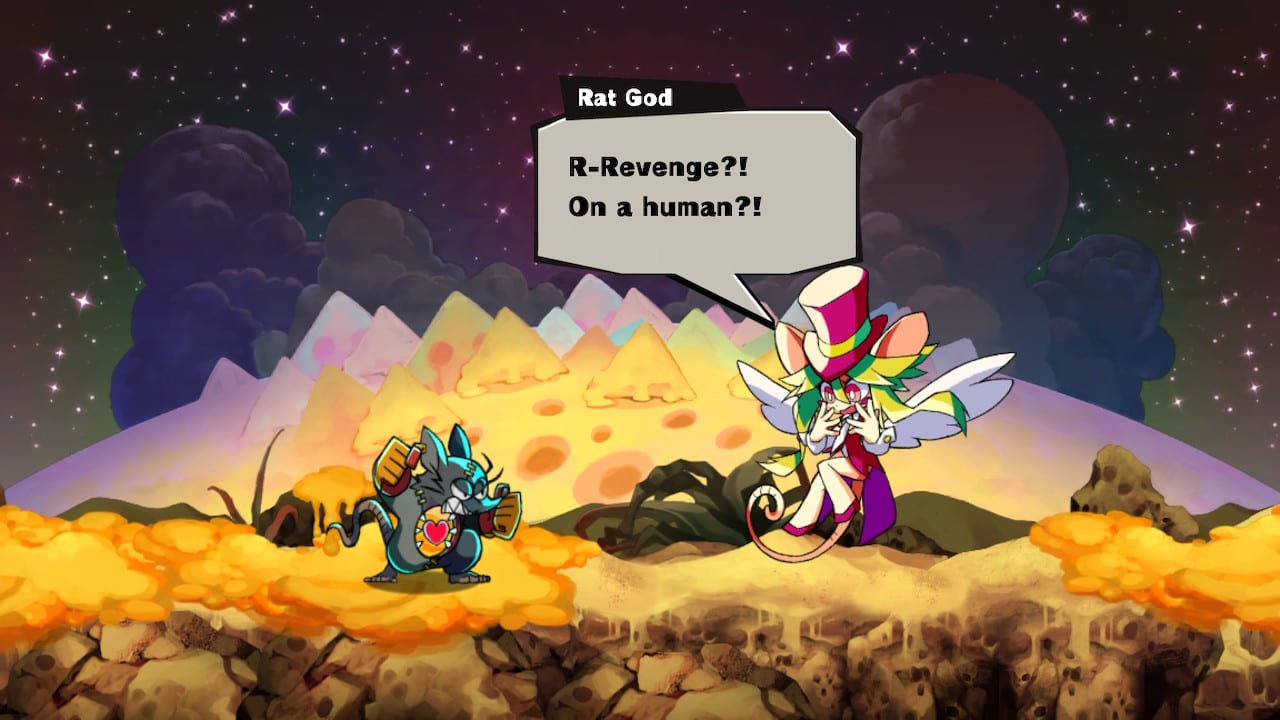 While it seems like a cliché plot that only exists as an excuse to play a rhythm game, it actually takes a different direction with how it concludes. Put simply, this is a game from a developer that allows you to murder angelic beings as bonus bosses, so suffice to say everything is not what it seems. I really loved the dynamic between Mad Rat and Heart, and their friendly relationship and developing character arcs are things I don’t normally expect in a rhythm game. So yes, I stayed for the plot and was pleasantly surprised with how goofy everything was with some emotional moments near the endgame.

As for the game itself, it’s an initially simple concept that doesn’t hold your hand later. Corresponding with his heart, you control Mad Rat through different worlds with an internal metronome. Every beat is tracked to an action, and in order to do anything, you’ll have to listen to the rhythm. Think Crypt of the Necrodancer in terms of movement and attack, as you can dash, charge, jump, and ground pound using this control scheme. At first, it’s relatively easy to pull off combos and do flashy movements, but later levels require you to be wise with your movements because Mad Rat is a squishy character and one hit will kill you…

…Is what I would say if it wasn’t for your ability to rewind time. Like Braid, you’ll have the ability to rewind a few seconds if you end up biting the dust, which means if you accidentally miss a cue or position yourself incorrectly, you can easily correct your course. You can even choose your timing position in case you want to go back farther from your combo. That said, you don’t want to abuse this mechanic, since your time is limited; running out of time in a stage is the only way to get a game over, and it keeps moving forward even if you get hit. You also get graded based on how much time you take, your overall timing, as well as your max combo, so try not to get hit too many times and you can get an elusive S+ rank. 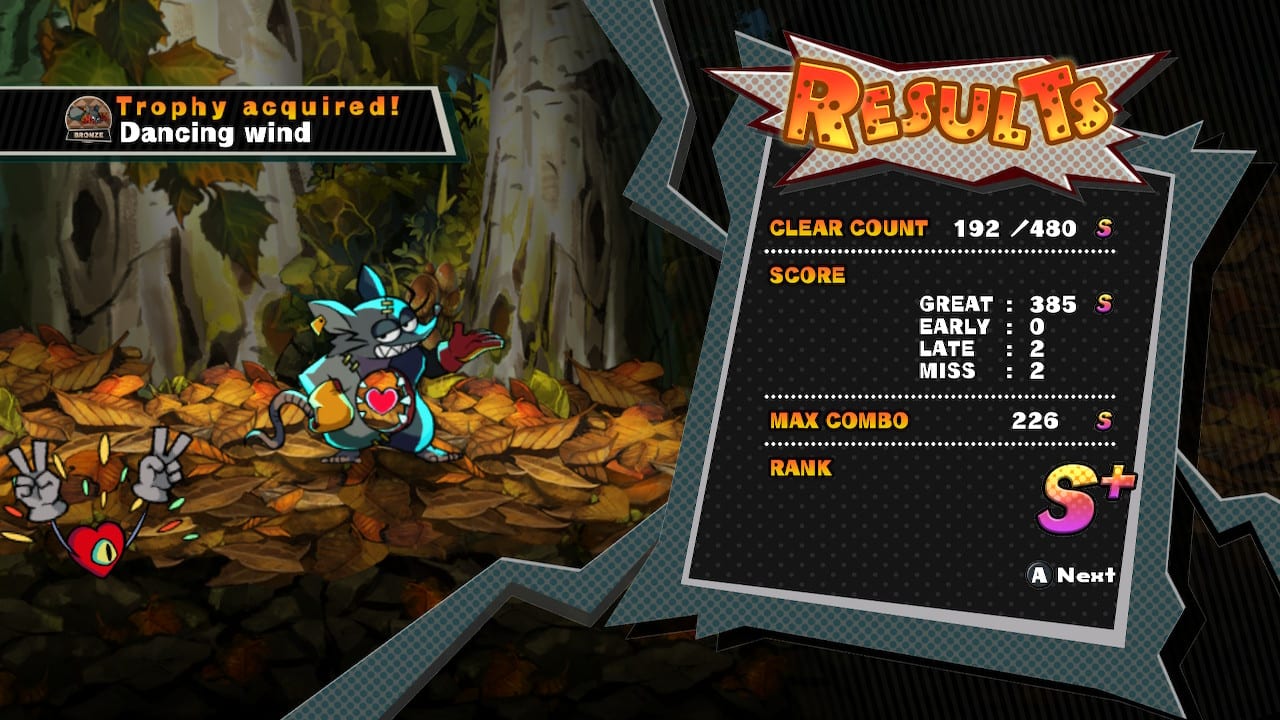 I really can’t stop singing my praises for the main gameplay loop in Mad Rat Dead, it’s just so dang innovative and fun to use. There were plenty of times when I had to use some quick thinking to dodge baddies, charge dashes, and even wall jump across rising waters in order to survive. The game does it in such a great way that if you play well, you’ll be rewarded with a flashy display of quick-moving finesse. While I don’t have godlike arcade rhythm game abilities, I’d like to say that I’m pretty good at the genre, and rhythm veterans will no doubt have fun chaining together combos and tracking the beat. You only have four buttons to worry about, but you can do so much with them in the mid and late game, it’s insane. The last world has songs which include some blisteringly fast rhythms and wind mechanics, and when I was in the groove, I was speeding as fast as 2D Sonic, and it was GLORIOUS.

It’s weird that I didn’t talk about the game’s soundtrack until now, but in a couple words, it’s simply marvelous. Every song works well in-game (and after you play a stage, you can actually switch your background music to an unlocked BGM to change how you approach a stage), and are simply bangers to listen to. From the electro-swing title track Mad Rat Heart (which I was psyched to play proper when I reached that part in-game) to the crunchy EDM final boss theme Heartless Being, each track is perfect and I may just buy the limited edition just to get a digital download of the OST (though please do us a favor and release it on storefronts, NiSA)! If you’re a fan of electronica or even big band and the aforementioned electro swing, you’ll find a lot to love here. 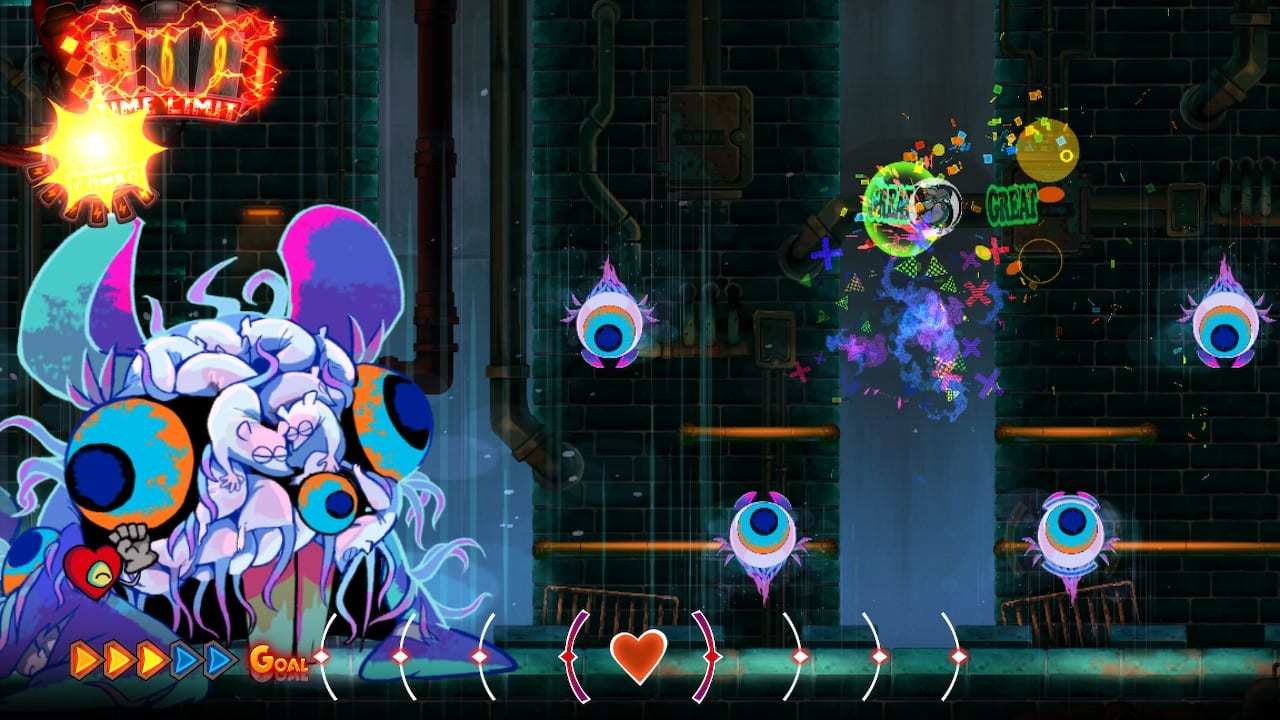 The boss battles are innovative and creative as well. While they follow the pattern of “dodge an enemy and attack their weak point”, the musical rhythms of the game make it so that each end-of-world boss has their own unique attack patterns and witty charm to them. The whole game is full of this unique comic book art style that looks beautiful even on the Switch’s handheld mode. It runs at a consistent framerate with some hiccups due to rhythm changes or when playing in hard mode (more on that later). I’m digging the fun, colorful art, and it’s something of which I want to see more in the future. (Slightly related note, I hear we’re getting a new Team Reptile game soon, so let’s carry on the aesthetic there!)

I will say that while the normal game is mostly reasonable (aside from a final boss battle that requires almost perfect timing in order to clear and some songs that troll you with extremely fast tempos interspersed with a couple slow notes), the unlockable hard difficulty can be unfair in regards to how it executes the beat pattern. In hard mode, you’ll have to tap red notes which need to be pressed multiple times or else Mad Rat won’t move. 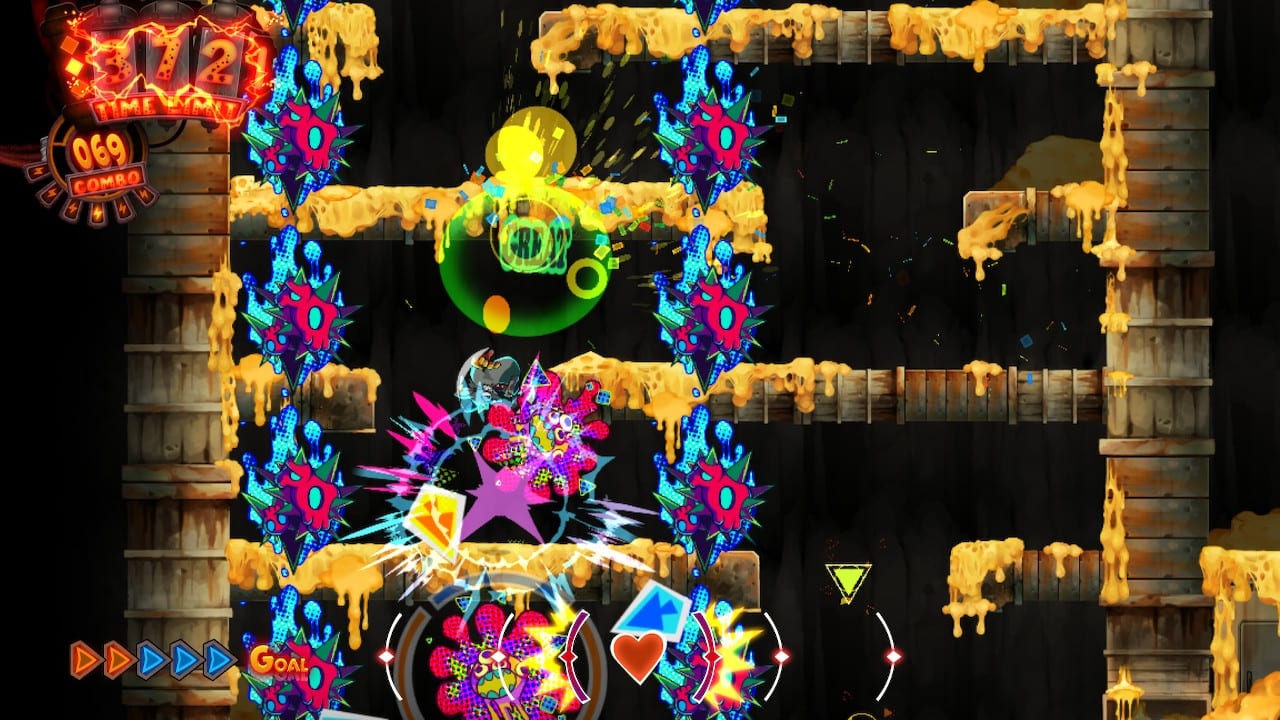 While this isn’t a problem with songs in the first couple worlds with recognizable rhythms, they’re more annoying with songs that have sudden changes in tempo (which are quite a few in the fifth and sixth worlds). You also must deal with everything on the screen, which can make you dizzy if you have to keep looking at the metronome as well as trying to dodge what’s on-screen. It’s a layer of difficulty that unfortunately frustrates more than challenges. For some reason, playing hard mode on the later stages also had a bit of slowdown; not so much to be a dealbreaker, but it was very noticeable. In short, I adored the normal difficulty’s approach with rhythm tracking and would recommend it over the alternate hard songs.

One other note I’d like to mention is the overall length of the game; I’m not sure if it was due to my personal skill or the amount of content, but I finished the main campaign in around 6 hours. While this seems a bit short (especially for a game that retails at $39.99), that’s quite a bit of content for a rhythm game and I’m currently tackling the game’s later hard mode songs, so I expect that time to at least double before I’m completely done with it. It helps that the soundtrack is so great and time just flies when I play. 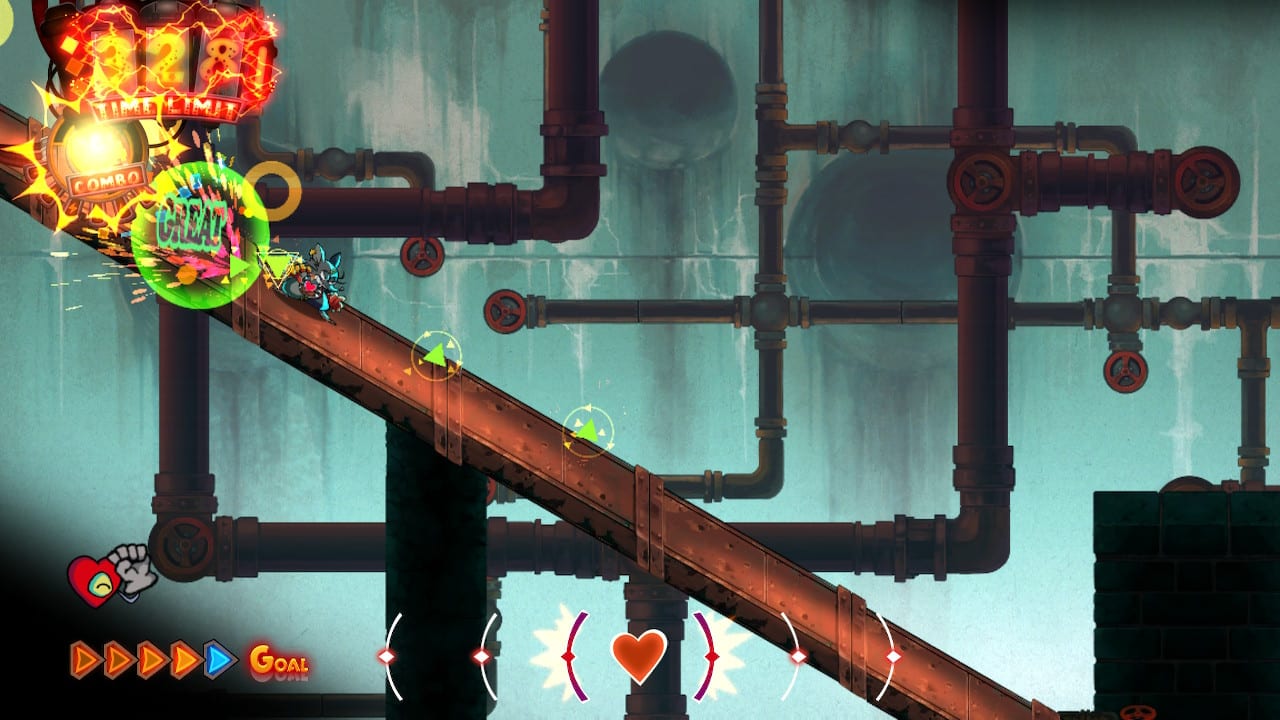 Mad Rat Dead is a game that has a massive amount of heart, both literally and figuratively. The game’s killer soundtrack and innovatively slick gameplay will dazzle rhythm game veterans, and it has a unique charming style that’s unmatched by the competition. It’s time to catch the beat and fall madly in love with Mad Rat Dead!

Elisha Deogracias is an aspiring accountant by day, freelance writer by night. Before writing for Gaming Trend, he had a small gig on the now defunct Examiner. When not being a third wheel with his best friends on dates or yearning for some closure on Pushing Daisies, he's busy catching up on shonen manga and wacky rhythm games. Mains R.O.B. in Smash. Still doesn't know if he's a kid or a squid.
Related Articles: Mad Rat Dead
Share
Tweet
Share
Submit