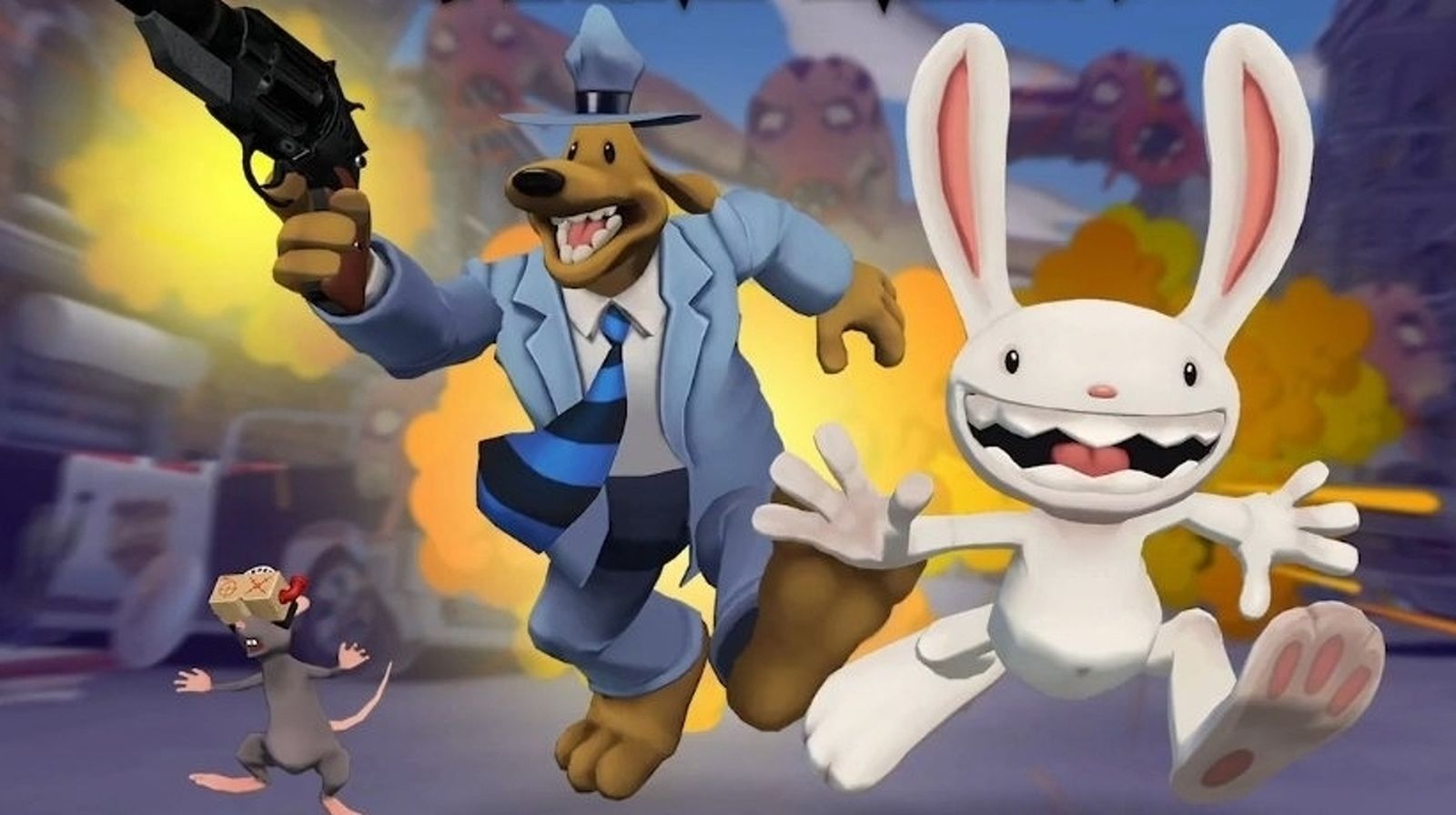 Holy jumping mother o’ God in a side-car with chocolate jimmies and a lobster bib! It’s time for more Sam & Max! If you don’t know who Sam & Max are then it’s likely we can’t be friends until you fix your egregious mistake. For those who do know the six foot tall suit-wearing dog and his lagomorphic psychopath rabbity-thing that make up the Freelance Police well, then you’ll be excited to jump in the Desoto once more for some hilarious comedy-based crime fighting. Only this time you are gonna do it with an overly hot brick strapped directly to your eyeballs! Let’s get to it, lil buddy.

Sam & Max: This Time It’s Virtual! is, as the name heavily suggests, a game set in virtual reality. Bizarre, I know! In it, you are cast as…well, let’s be honest, it doesn’t matter. In fact, the duo don’t even bother to learn your name — you’ll be called “Lumpy” from now on.

Well Lumpy, you can’t just wave a wand and become a member of the Freelance Police. No…there’s paperwork involved. In fact, Sam has to literally hand you a piece of paper, and then you’ll need to finish a complex checklist for Max with such daunting tasks as making him corndogs for lunch, fetching coffee, and punching a clown in the face repeatedly. Behold the job interview in all of its majesty.

The best part about Sam & Max: This Time It’s Virtual! is the strength of the writing, and it’s turned up to 11 thanks to the stellar voicework of returning veteran voice actors David Nowlin as Sam and David Boat as Max. Developer Happy Giant delivered them a fantastic script, and both deliver their lines with a certain joie de vivre. (“Sam…don’t say joie de vivre ever again”)

At its heart, Sam & Max has always been about goofy puzzles and the best non-sequiturs brought to life. One example is a bomb defusal minigame where the explosives are, of course, hidden in the severed head of famous inventor/patent-thief Thomas Edison. Your job is to play a twisted version of the late 90s game Bop-It! The eyes will light up , face a direction, or otherwise roll around in the disembodied talking robo-skull, giving you clues on how to proceed. Cutting wires in the right order will expose a lever of some kind. You’ll proceed with exposing all the levers using your screwdrivers and wire cutters until you reach the heart of this bizarre fever-dream. You’ll twist, squeeze, plunge, and otherwise manipulate the levers by figuring out if Edison is lying to you and then acting accordingly — I particularly like the parts where I get to poke him in the eye. All of the minigames in this title are precisely this level of lunacy, and I’m here for it.

The puzzles are lighter fare and usually fairly easy to solve, keeping the pace rolling forward. You’ll see more of these puzzles in the second half of the game than the first, with the first being essentially training montages and lunacy like the scenario above. There are some classic pixel-hunting puzzles, and more of the nonsensical “Pick up the severed hand of Jesse James” sort of insanity we’ve come to know and love. Sure, it pads the runtime a little bit but if you are in the S&M headspace (Ok, that sounded better in my head), they aren’t difficult.

For longtime fans of the series, there are oodles of in-jokes and Easter eggs to find throughout the game. You’ll find a lot of familiar artwork in the team’s office, just for starters. These sorts of throwbacks honor the 30 years of awesome games we’ve gotten to play, and I loved finding them.

I did run into a few bugs that I couldn’t kill with Sam’s trusty six shooter. Characters having trouble with pathfinding, clipping, and the odd minigame that won’t reset (e.g. I just need more bombs to throw into the basketball hoop, and one got stuck underneath the puzzle).

All in all there are 17 interactive areas in the game spread across roughly 5-6 hours of gameplay, with exploration spaces in between to keep you busy. The “Cap’n Aquabear’s Funtime Park” video you can see above has repeatable obstacle course / shooting galleries designed by none other than LucasArts alum Peter Chan. You can go back and repeat these for high scores and to improve your letter grade, but they are just fun in their own right. Rounding out the team, folks like Steve Purcell (Sam & Max creator, Loom, Zombies Ate My Neighbors, all of the Monkey Island games), Mike Stemmle (Director or designer for games like Secret of Monkey Island, Indiana Jones and the Fate of Atlantis, Star Wars Jedi Knight II: Jedi Outcast, and MANY more), and Mike Levine (The Dig, Insecticide, Star Wars Jedi Knight – Dark Forces II) lent their talents to this title to bring it to life. It’s a jam-packed list of who’s who in the adventure game business, and it shows in the outcome.

At $29.99 it feels appropriately priced for the part-experience / mini-game puzzler that it is, and I’ve certainly paid more for less. The game is even self-aware about it in some spots, as you’d expect. Like other games in my collection, it’s often as fun to watch somebody else experience the story for themselves, even after you’ve completed it.

Sam & Max: This Time It's Virtual!

Ron Burke is the Editor in Chief for Gaming Trend. Currently living in Fort Worth, Texas, Ron is an old-school gamer who enjoys CRPGs, action/adventure, platformers, music games, and has recently gotten into tabletop gaming. Ron is also a fourth degree black belt, with a Master's rank in Matsumura Seito Shōrin-ryū, Moo Duk Kwan Tang Soo Do, Universal Tang Soo Do Alliance, and International Tang Soo Do Federation. He also holds ranks in several other styles in his search to be a well-rounded fighter. Ron has been married to Gaming Trend Editor, Laura Burke, for 21 years. They have three dogs - Pazuzu (Irish Terrier), Atë, and Calliope (both Australian Kelpie/Pit Bull mixes).
Related Articles: Sam & Max: This Time It's Virtual!, VR
Share
Tweet
Share
Submit