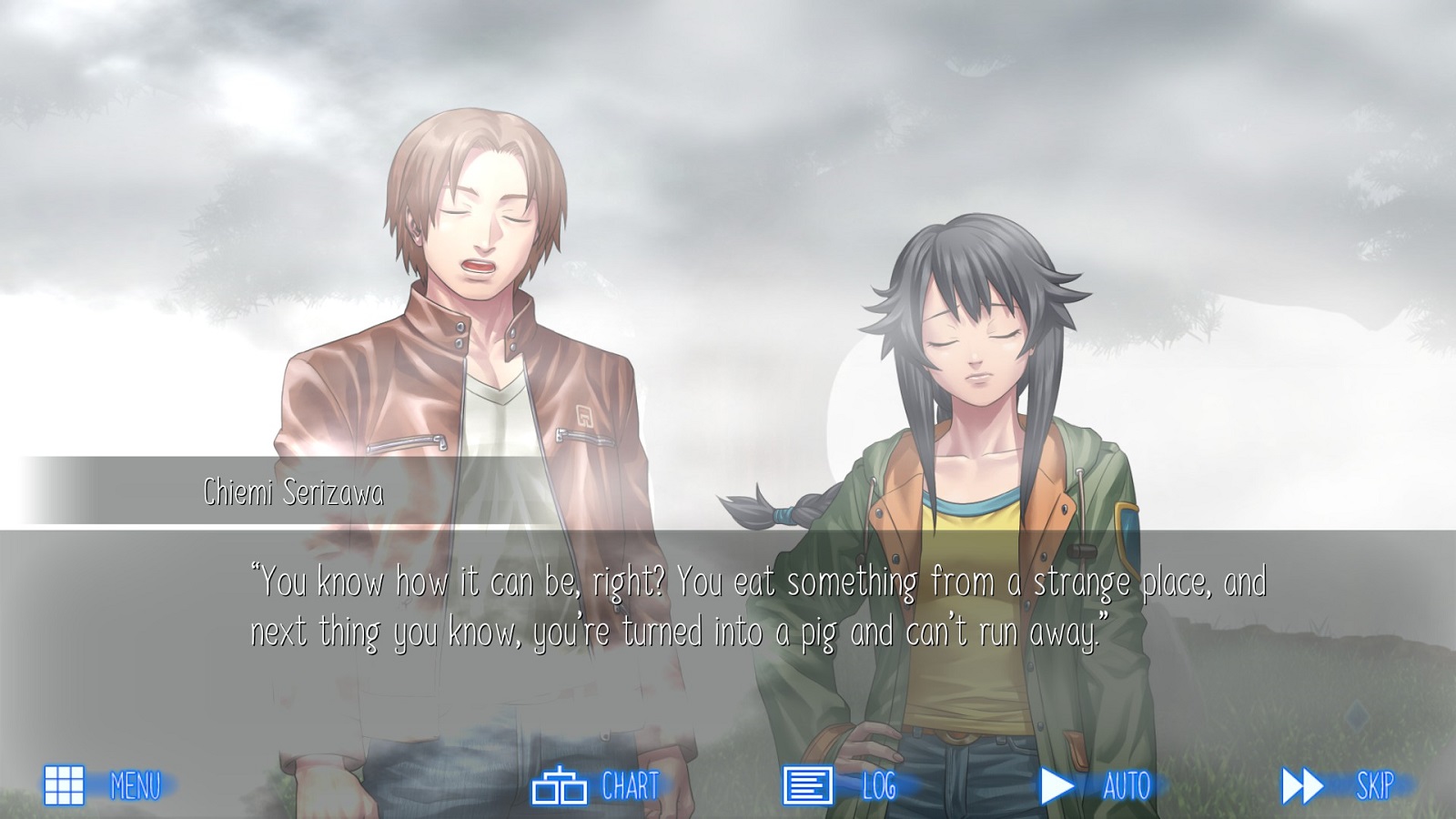 Other than studying, my university days were spent playing the classic party game Mafia, where a group of villagers has to team up together to find and kill the Mafia members infiltrating their ranks. It’s a fun deduction game that’s bound to create a social dynamic the more you play with the same group of friends, and it’s a simple premise that’s bound to rile up some feathers when you’re trying to accuse someone of being a murderer in-game. The traditional version, known as Werewolf, is the basis of PQube and KEMCO’s Raging Loop, a psychological thriller/supernatural horror visual novel that grips and engages you the more you get into it. While it may take a bit of time to start up, once you start unraveling the mysterious world, you won’t be able to stop reading.

Haruaki Fusaishi is your typical Japanese college student whose biking trip ends in disaster when he gets stuck in the village of Yasumizu. While interacting with the eccentric cast of villagers (as well as a few outsiders, Haruaki included), he’s brought into a grisly game of deduction and murder with the Feast of the Yomi-Purge, which is a legend that everyone in the village religiously follows.

Some characters are cursed as wolves, destined to kill a random villager every night; at the beginning of each morning, the surviving villagers vote for who they think is a wolf. Whoever gets the majority vote is killed by hanging, and the cycle continues until either all the wolves or villagers die. However, some characters are also granted guardian roles, which can help aid the villagers, like the spider, who can save one person from a wolf attack each night, or the snake, who can investigate one villager per night to see if they’re a wolf or not.

Your first route will end in tragedy, no doubt about it. 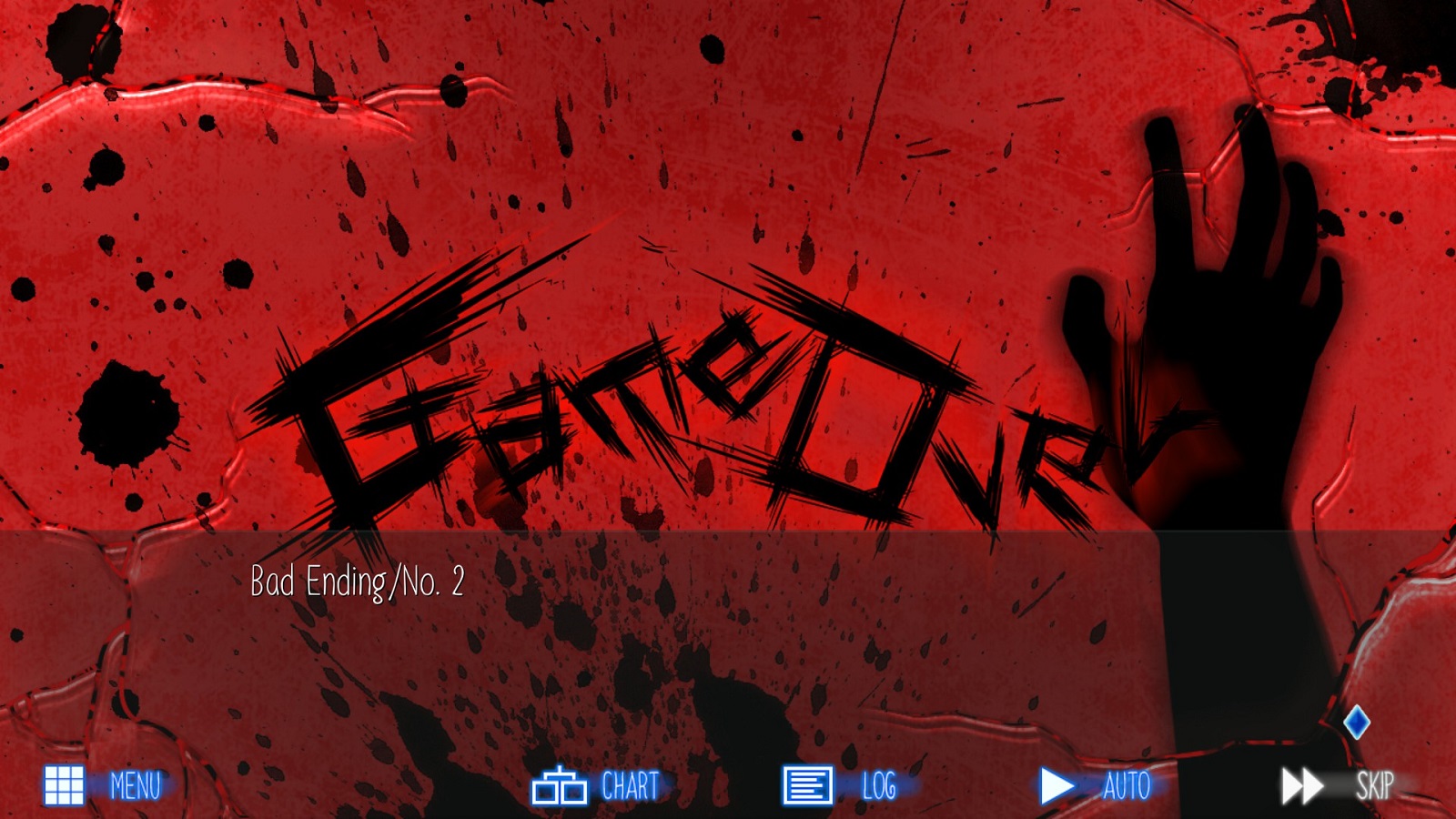 Be prepared to see this screen a lot.

However, the mechanic that sets Raging Loop apart is through its key system. Initially, you won’t have any information going in, so most choices will be locked on a first playthrough. Only by dying again and again will you have the answers (since Haruaki will just loop back to a time before he died), and getting the appropriate key will allow you to advance the story in different ways. In almost all cases, intentionally making a wrong choice is more beneficial than making a correct one due to the fact that you’ll be getting more information that way.

For example, your first death will occur mere minutes after the feast begins, as going out during the night is a big no-no. Haruaki “dies” then comes back, with the knowledge being a key and enabling you to stay indoors and survive the night. You can also go back to any point in your playthrough using a Zero Escape-like flowchart which details branching choices, the keys you’ll need to make a certain decision, as well as any time your decision ended in your death. It’s a well-constructed chart that allows you to go back and try to mend the errors of your (sometimes stupid) ways. 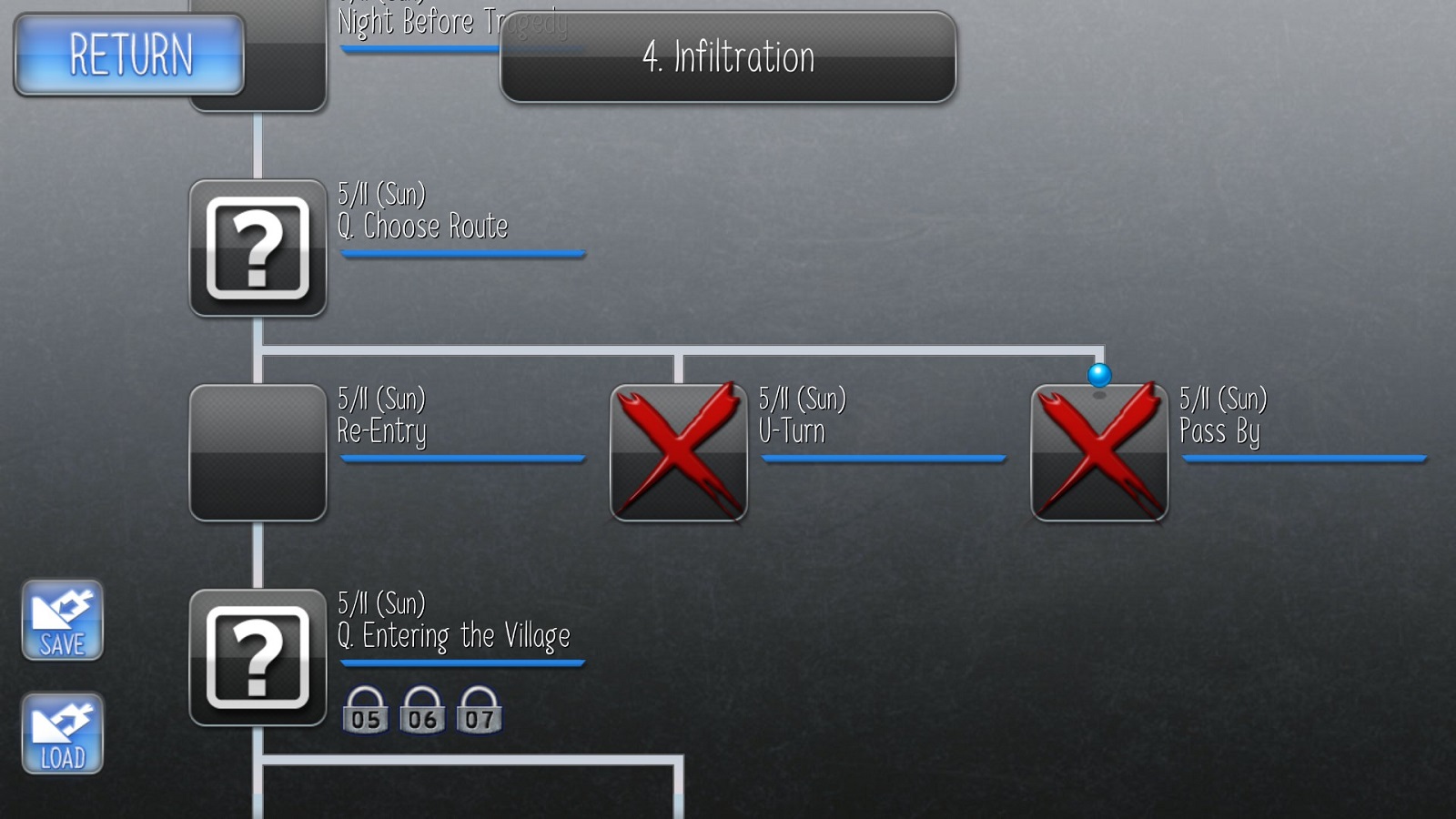 I was actually surprised at how attached I would get to Haruaki. While he does fall into a stereotypical jerk during the first route of the game, as he continues to die and relive his experiences over and over again, he develops into a heroic character. Of course, he’s not without his snark, and while he does get traumatized from some of the more grisly death sequences, his wit shines through in the face of danger; in a way, he’s kind of like Tree from Happy Death Day, who can go from afraid of dying to just having fun with an intentional suicide, knowing full well there will be no consequences. It’s darkly comedic, which is a breath of fresh air when almost all of the game remains serious. The other characters are engaging and interesting as well, and I felt a deep attachment to them throughout my loops, especially when one of them would die. As is the case for Mafia/Werewolf, most of them will die; it’s just the fact that you can save them that kept me playing. 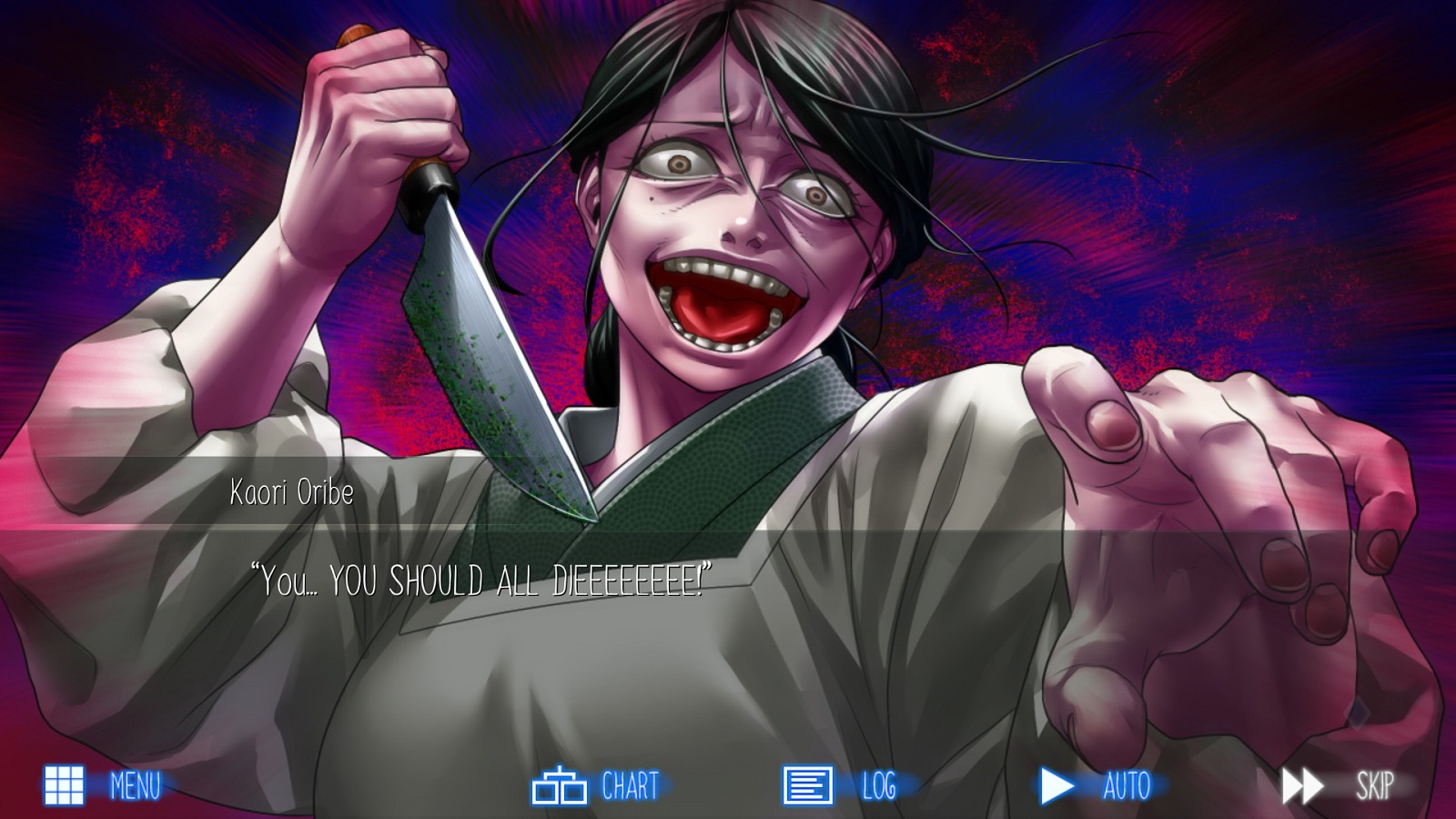 The writing is well done in this translation, as there is a great emphasis on the religious lore of Yasumizu’s Feast, with a lot of the elements not falling through a simple rehash due to the fact that you’ll be repeating events in a similar fashion. For a main example, while the subsequent routes will always set up the mechanics of the main feast, the way that Haruaki experiences everything will be different, as his thoughts will try to process what to change next. Oddly enough for a visual novel, there’s an incentive to replay the game all over again immediately after playing, as you unlock the Revelation Mode once you reach the true ending. This allows you to view the thoughts of some other characters and even unlock some different scenes which help cement some ambiguous story details.

There are a few flaws with Raging Loop, however. The first is in regards to the presentation of content; coming fresh off of AI: The Somnium Files, I was treated to some not so child-friendly images of gore and violence (which is fair, considering the M rating). This game also touts an M rating, with a few CG scenes being a bit more creepy than usual. However, while the text is very descriptive with a lot of the death and horrific elements, the visuals normally don’t match, usually offering up an unrecognizable pile of generic guts and gore rather than something more visceral. It’s not a dealbreaker (and I don’t think I would want to see some of the more… creative death scenes), but just having flashes of blood effects followed by a game over screen just feels like a cop out. I would have appreciated more background art and music tracks, though the writing is strong enough to overcome this oversight. 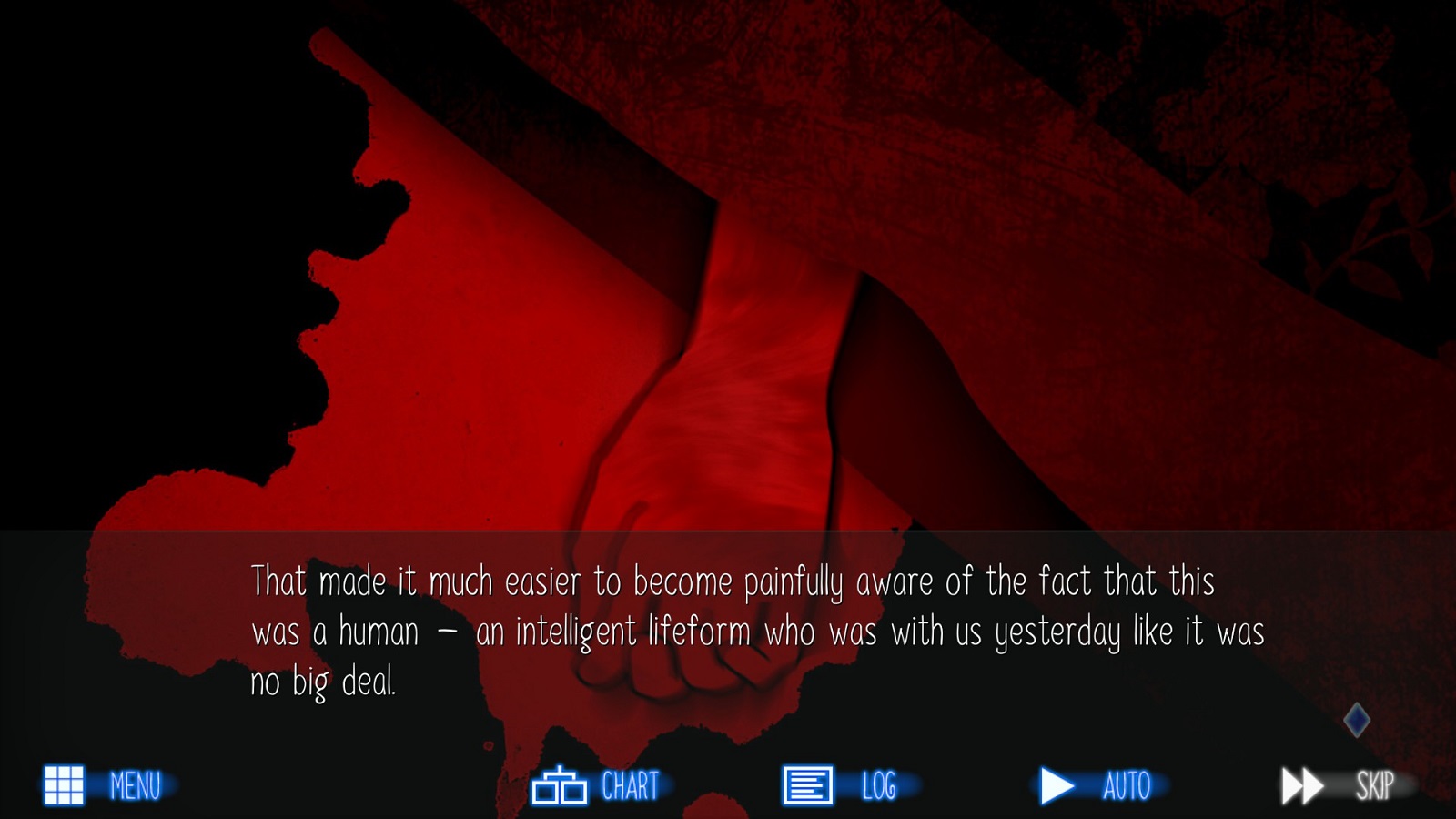 This is grisly, but you know what would be better? Actually seeing it.

While I was engrossed with the story during my playthrough, I have to admit there are parts in the beginning that feel too linear and as a result, makes the narrative drag on in the first couple of hours. The first route in itself is too linear, with no real choices to make bar a couple near the end; it’s once you get to the routes after that one that Raging Loop starts throwing you… well, for a loop. While I know fans of visual novels will eat the whole story up, I would encourage you to give this one a try even if you don’t normally enjoy games in the genre. It’s a wonderfully macabre tale with a cast of memorable characters, a nice choice mechanic, and a pretty visceral writing style.

While it takes a while to establish the plot, Raging Loop is a visual novel that’s grisly and heartfelt. It’s equal parts terrifying and cerebral, and will appeal to anyone looking for a mystery-horror game to curl up and read to on a bleak night.

Elisha Deogracias is an aspiring accountant by day, freelance writer by night. Before writing for Gaming Trend, he had a small gig on the now defunct Examiner. When not being a third wheel with his best friends on dates or yearning for some closure on Pushing Daisies, he's busy catching up on shonen manga and wacky rhythm games. Mains R.O.B. in Smash. Still doesn't know if he's a kid or a squid.
Related Articles: Indies, Raging Loop
Share
Tweet
Share
Submit