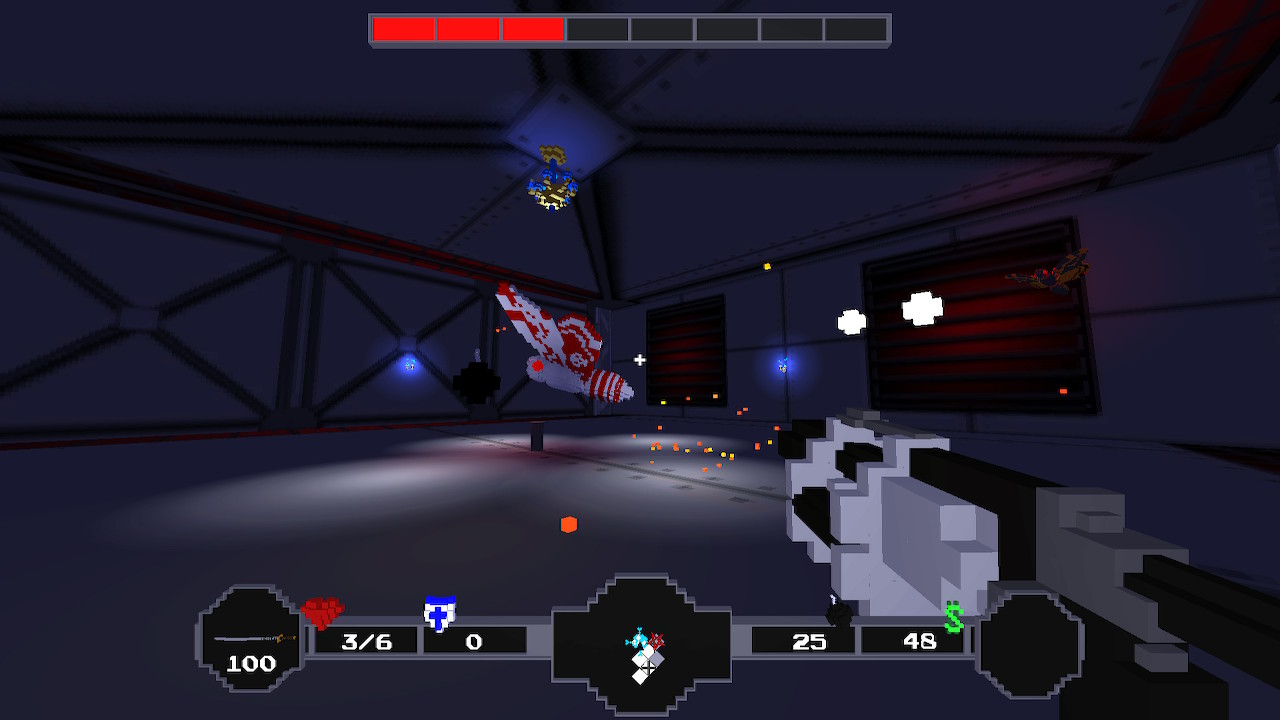 Some people like rogue-lite games, while others prefer first person shooters. Why not take both of those concepts, combine them, and give it all a blocky aesthetic? Paranautical Activity takes that idea and brings it to life.

Paranautical Activity originally started out on Steam, and has now made its way to the Nintendo Switch. The game’s basic premise involves making your way through a randomly generated collection of rooms, all while fighting the various enemies that spawn. Once you’ve entered a new room, you must defeat every enemy in order to move on. After clearing a room once, you never have to do it again. The foes you face will be random, ranging from turret robots to ninja samurai to demons and more. Some focus on projectile weapons, and others will rush towards you for a melee attack. Learning how each foe fights is important in trying to survive.

Besides the typical fighting rooms, there are also four other types of rooms you will encounter: gift shops, weapon rooms, mini-boss rooms, and the boss room. The gift shops are your chance to buy new weapons or powerups with the money that you collect from destroying enemies. You can only hold one primary weapon and one super weapon, so if that flak gun looks tempting, you’ll have to trade in the shotgun you may be holding. As for powerups, they are one time uses and have a variety of effects including increased speed, more damage, and even better accuracy. From my experience, the weapons I got felt like a better use of my money. The weapon rooms came in handy because they offered a few weapons for free, so I took advantage of them whenever I could.

The game is broken up into floors, and you need to beat the boss of the floor in order to access the elevator to move on. On the map, the boss rooms are marked with red pentagrams, while the mini-boss rooms have light blue skull and crossbones. The mini-bosses offer an extra challenge for the player, while also rewarding them with upgrades upon victory. The bosses also reward the player with abilities like double jump. The mini-bosses are completely optional, so feel free to ignore them if you want–I know I passed by them plenty of times.

Now, the bosses themselves are a mixed bag. Their designs and differing attacks are nice, but some of them are aggravating. The whale that shoots energy balls and the moth that flies around are challenging, but not unfair. However, the snail and the floating skull are different stories; they delve into the unfair territory of difficulty. The floating skull shoots lasers and will occasionally release a swarm of spider creatures to come after you. The spiders aren’t big, but they do the same amount of damage as the skull can do. This makes them just as deadly, or possibly worse. As a result, you have to avoid the spiders and kill them quick so that you can fight the skull before more spiders come back. The snail is worse because it’s fast and bum rushes you. If you’re a faster character, then you can potentially avoid the snail and win. If you’re a slower character, then you usually get bum rushed and mowed down relatively quickly. That being said, I’ve never killed the snail without taking damage. It feels less like a difficult challenge, and more like an unfair beat down when you run into it.

Starting off, you get to choose between a few different characters: David Bowie, The Tank, Dy-no-mite, and Gorton. They all have their own amounts of health, speed, damage, fire rate, and weapons. David Bowie gets a crossbow that you have to charge before firing, The Tank has a shotgun, Dy-no-mite carries a grenade launcher, and Gorton wields a sickle that you throw like a boomerang. As mentioned above, some characters are faster than others. Gorton and David Bowie are quicker, but have less health as a result. On the flip side, The Tank is slower, but has more health. Dy-no-mite is more of a balanced character in terms of stats, which is interesting considering they use a grenade launcher. The weapons mentioned above are all fun to use and are equally effective if you know how to use them.

The gameplay is relatively fluid, although it could be a bit more polished. The dubstep style music is entertaining, and it oddly fits with the blocky nature of the world. It isn’t the most attractive looking game, but it’s quirky in its own right. It may be randomly generated, but the levels could have more variety or at least be more interesting. It doesn’t take long to experience how most levels are going to be.

Paranautical Activity does its best to blend together a few different genres of games. The result isn’t perfect or necessarily groundbreaking, but it can be an entertaining experience nonetheless. The combination of “bum rush” enemies and some slower characters can result in failure and a lack of fun. A good challenge is always welcome, but when it starts to become unfair, it ends up ruining the experience. If some of the enemies, including the snail, get tweaked, then maybe progression might be more attainable. In that case, I’d be more likely to hop back in and give Paranautical Activity another shot.

Paranautical Activity mixes rogue-lite level design, fps gameplay, and a blocky aesthetic to create an interesting experience. The combat can be fun, but encountering certain enemies can quickly turn that around. The weapon choices are cool to experiment with, but the slower characters may turn you away.

Codi loves to play video games and watch movies. He will watch almost any kind of movie just to experience them. His ideas take inspiration from the shows and movies he watches, and games he plays. He also loves a good pun.
Related Articles: Paranautical Activity
Share
Tweet
Share
Submit