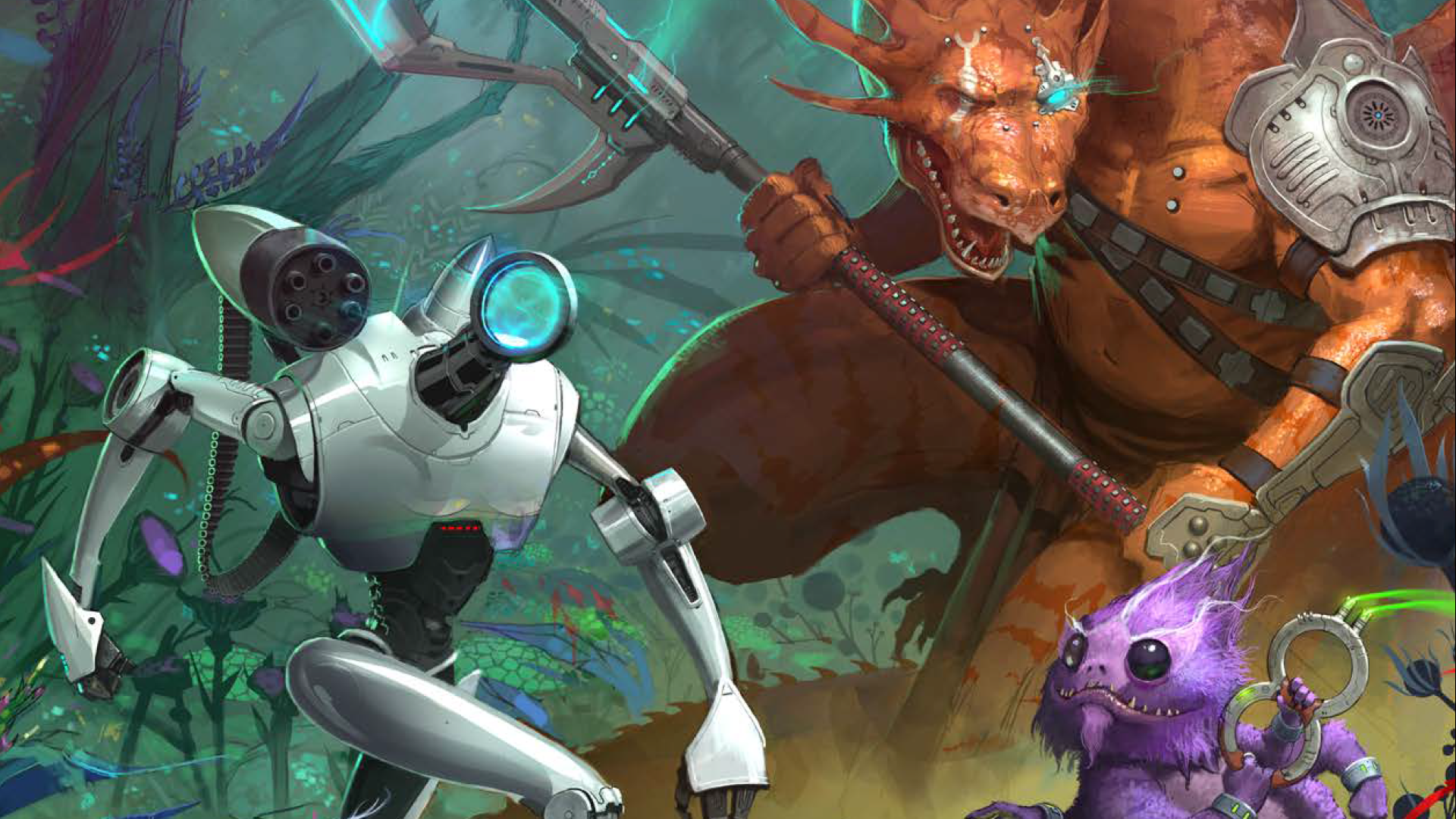 The Alien Archive is more than just a monster manual for Starfinder. I mean both a literal and philosophical sense. As a book, it expands beyond a listing of aliens for your parties to engage with. It also works hard to make a case for Starfinder’s design philosophy, and where the franchise is headed. The Alien Archive proves that this game is more than just Pathfinder in space, and stakes its claim firmly in the territory of weird space fantasy that I was hoping to explore. Functioning as a tool for both Game Masters and players, this listing of monsters also gives you new information on the setting and ways to create encounters all your own. While I found myself wishing for more content, I was also enthralled with some of the chances the team at Paizo decided to make with this release

First and foremost, the Alien Archive is a monster manual. While it claims to contain over 80 creatures, this is only true depending on the way you choose to count it. There are 60 proper two page entries for each creature type, some of which have additional variants making up extra statblocks. The book clocks in at 159 pages including introduction and appendices, which longtime Paizo fans will note is far less than their typical monster manuals have contained. While I am impressed with the quality of this release, its relatively terse pagecount is a concern for a $40 gaming accessory.

To give credit where it’s due, those entries do great work to elevate Starfinder as a quality game. Each two page spread has enough room for lavish, tonally consistent art that will stop you in your tracks to seek out new information. Once you start reading, you will be pleased at the density and the quality of the writing, which describes the aliens’ habits but also contains a surprising degree of lore to help fill out your game world. It’s seeing work like this that assures me Paizo is committed to making Starfinder special, rather than the last ditch product I was afraid it might become.

You will find some inspired entries here, which go far beyond the standard Space Goblins and Space Drow. While those races do have enough creativity and ingenuity injected into them that I would be happy to see them in my game, they have nothing on the Hespers, fey creatures which can meld with a ship’s engines for power, or the Assembly Ooze, which is a brilliant reinterpretation of the Gelatinous Cube: a carnivorous cube of nanobots which have run wild. There is even one mighty class of Devils which can turn into spaceships for high level encounters (and a nasty surprise for players trying to make their getaway). These creatures have far more interesting behaviors than your standard melee or ranged attacks, and both ends of the table are sure to have a wonderful time seeing the unusual challenges they provide.

Even better, 22 of these monsters serve an additional purpose: as playable character races. Science fiction tends to function on a far more racially diverse playground than most fantasy settings, and the ability to seamlessly add Roswell’s Grays, floating telepathic Barathu, or even sentient floating brains into your playgroup will ensure that this game stands out. They were not afraid to stray from the typical “humanoid with darkvision and one other thing” racial makeup, and the diverse builds we will see from these characters have me excited. While it does mean we won’t be seeing the same specialized racial archetypes of Pathfinder, they always crossed the line for me into needlessly granular. Starfinder will let you play something weird and feel good about doing so.

Another refreshing change from Pathfinder are the statblocks. I have long been on record as saying that Pathfinder’s monsters have too many abilities and skill checks to make them useable, and this complexity has been cut down a great deal for the Archive. Without sacrificing variety, these monsters’ stats are more easily readable and usable than ever before. This comes down to a mixture of game design and layout, creating something both prove impressive. The way each alien’s entries are broken up are logical and easy on the eyes. That said, they are still complicated, and will require referencing several different sections (or potentially books) to get completely right. You will still need your own notes and shorthand to make these completely usable in-game.

The last major feature of the book are the appendices which break down how players and GMs can create their own monsters for gameplay. I am of two minds about this section because of how much information it provides you. On the one hand, it is definitely comprehensive. Paizo’s designers break down monsters into their every component to show you how you can make balanced, thematic, and challenging encounters. On the other hand, they throw a lot at you, and leave you with quite a bit of work to make something your own. I appreciate the customization available, and it’s a genuine step up from the scant encounter adjustment tables of the D&D Fifth Edition Dungeon Master’s Guide.

However, because of the limited material in the book you will have to engage with these granular rules somewhat often until the game picks up some steam. There is only one Dragon statblock in the game, so if you want your players to encounter another or a different kind, be prepared to learn the ins and outs of the various Grafts you can apply to creatures (such as Undead, Water Breathing, or Breath Weapon).

Additionally, the Alien Archive contains a new Summon Monster spell, along with tables of how to construct beasts and aliens to use alongside it. Again, this is a nice change from the usual stock listing of monsters and I am sure it will entice many power gamers to generate their own monsterpedias, but if I have to build a creature midgame to summon for a particular purpose, I would be hardpressed to do so quickly.

That’s it, except for a minor index which lists monsters by Challenge Rating, and no other way. We don’t have anything that separates them by environments, grafts, or behavior, which would have helped you prepare for your game quite a bit. Additionally, this table reminds you of how low level the Alien Archive is. The vast majority of creatures are below CR 10 and they decrease from there. While I am sure most tables are still at low levels and not choosing to leap ahead into epic play, it would have helped the game to get a better taste of what more legendary encounters are meant to look like.

The Alien Archive helps cement Starfinder’s vibrant, unique vision of space fantasy. It’s a promising resource for players and GMs alike, if a limited one. The creativity filling every page is undercut by the short length, but overall it helps make Starfinder an enticing, unique game line.

John Farrell is a legal aid attorney specializing in domestic violence, living in West Chester Pennsylvania. You can listen to him travel the weird west as Carrie A. Nation in the Joker's Wild podcast at: https://jokerswildpodcast.weebly.com/
Related Articles: Starfinder Alien Archive, Tabletop
Share
Tweet
Share
Submit