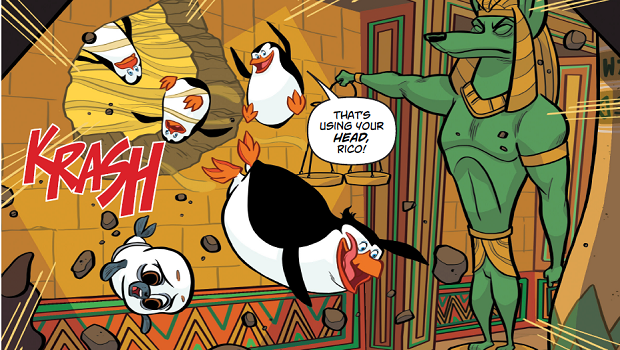 Hey, remember The Penguins of Madagascar? I was a bit surprised at the spinoff series that stemmed from the Madagascar franchise due to its goofy and off-the-wall nature. Following the series’ 2014 film, Titan Comics released a four-issue run of the adventures of Skipper, Kowalski, Rico, and Private as they join forces with the newly introduced North Wind, an organization of arctic animals constantly competing with the penguins. Penguins of Madagascar: Secret Paws collects the second half of the series, which is an energetic, fun-filled romp for the kids.

This volume drops readers at the latter half of a two-part story in The Elite-est of the Elite, as well as a new story, Artic Foxed, and a four-part series of North Wind back-up strips. The main issues were written by Cavan Scott, and the art was made by Lucas Ferreyra, while the back-up stories were written by David Baillie, with art by Grant Perkins.

Panel from Elite-est of the Elite

The Elite-est of the Elite II follows the penguins and the North Wind as they compete to win a coveted award naming their organization the “Elite-est of the Elite.” Included in the competition is Kevin the Lemming, a mysterious figure who joins the two teams on their journey to become the most elite of them all. The premise of this story is quirky and nonsensical, but the art style fits the tone of the series well. Converting 3D models into 2D drawings is a hard task, but the art is well colored and has bright tones to match the frantic action.. The twists near the end of the issue are very predictable, but the humor is in line with the film, even if it might not appeal to older audiences. The hurricane of puns is in no short supply (especially with a literal hurricane in the form of a sandstorm), and the character banter is chiding and entertaining as always.

Panel from Out Foxed

Arctic Foxed has the penguins facing a crisis as one of their own steals secret schematics in order to win the heart of a double-crossing spy. The North Wind, suspicious of the remaining penguins’ conflict of interest, tries to get them off the case, but the Penguins have other plans in mind. I think this story was the best part of the volume because of the issue’s reliance on an icy motif. Because the schematics involved are based on a weather machine, there are a lot of colder colors and tones, specifically a mix of blues and whites. Considering the characters involved are arctic creatures, the art fits the atmosphere perfectly. The plot, which has one of the penguins deceiving the others, is a relatively serious one by franchise standards, but does wind up becoming hilariously derailed by the end.

Panel from the collected back-up stories

Also included are a collection of back-up strips chronicling the adventures of the North Wind as their leader, agent Classified, needs to clear himself of a crime he did not commit. While I do appreciate the primary focus on the penguins’ B-team, I felt like this was the weakest part of the package. The art is too simplistic to capture the usual frantic nature of these comics. Most expressions are wooden and static, and they clash with the main issues’ arts style. Additionally, the plot is scarce and wrapped up way too quickly. It doesn’t give a chance to highlight the other members, Eva, Corporal, or Short Fuse, and they’re relegated to one-liners or reaction shots, and the villain is a very flat and stereotypical one. They might be back-up strips, but they’re lazy ones.

While the extra strips included are disappointing, I still had a fun time with Penguins of Madagascar: Secret Paws. It’s a lighthearted volume that will charm kids with its pun-based humor, peculiar characters and unique art.

Elisha Deogracias is an aspiring accountant by day, freelance writer by night. Before writing for Gaming Trend, he had a small gig on the now defunct Examiner. When not being a third wheel with his best friends on dates or yearning for some closure on Pushing Daisies, he's busy catching up on shonen manga and wacky rhythm games. Mains R.O.B. in Smash. Still doesn't know if he's a kid or a squid.
Related Articles: Beyond the Page, Penguins of Madagascar: Secret Paws
Share
Tweet
Share
Submit