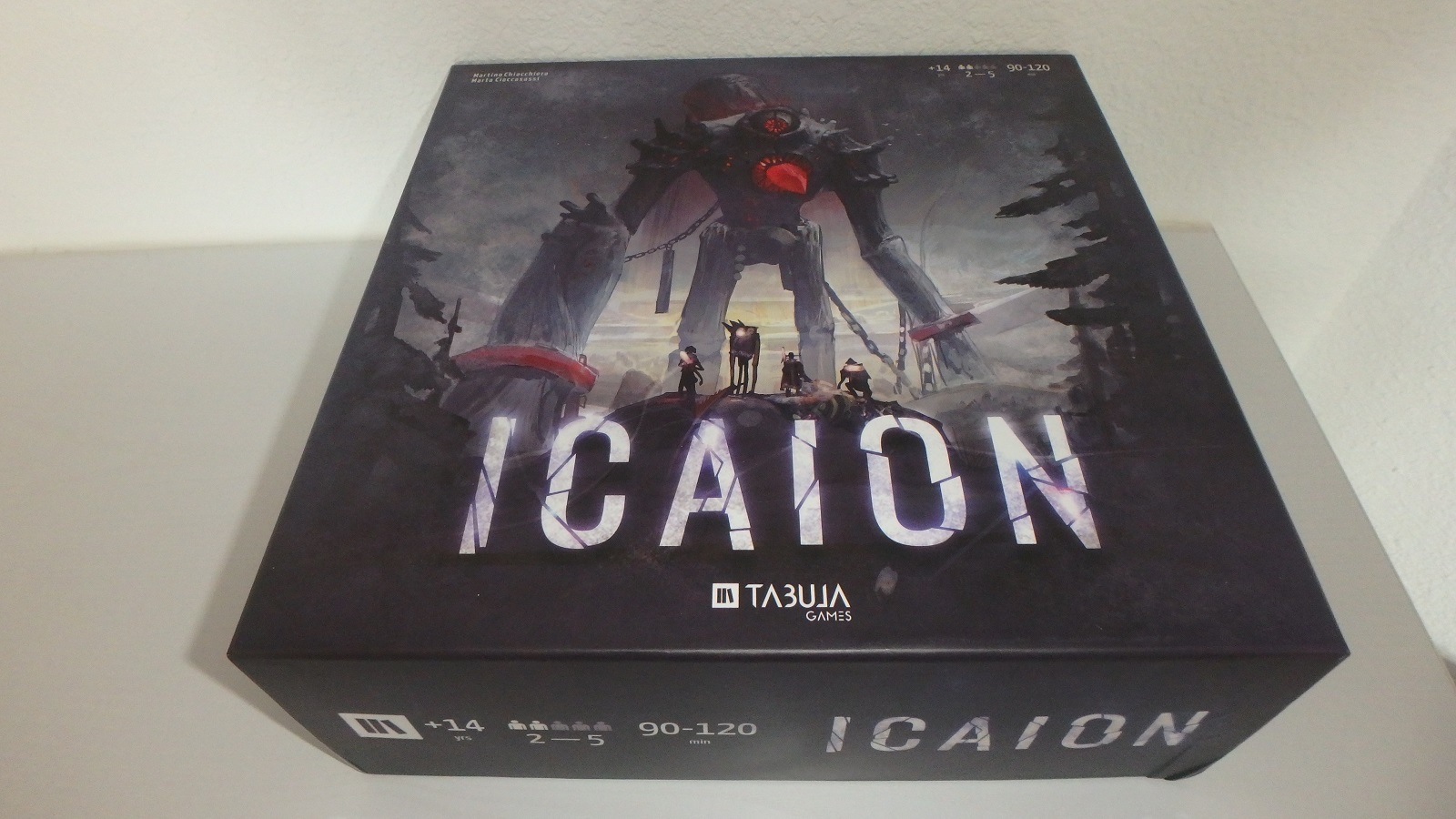 Icaion, just like its predecessor Mysthea, is a gorgeous game. The art is very nice, there’s once again your preposterous amount of minis for Kickstarter, and boy am I a sucker for double-layer player boards. However, while Mysthea was a game I thoroughly enjoyed despite its faults, Icaion is a game with faults so glaring that I just can’t justify its existence in my collection.

Right off the bat as I was setting up Icaion, it committed its first sin. You see, this game is simultaneously very color-dependent but also strangely loose with its use of color. For example, Icaion calls the clear crystals gray. The mountain card, whose regions and crystals are brown, is very white. Pink crystals come from the red region. All this is exacerbated by the fact that the region cards have icons on them that are repeated nowhere else in the game, despite regions being massive and the board being double-sided. One side could have easily included region icons and maybe even the colored crystal iconography that is used elsewhere in the game, but instead they opted to have a side of the board that is even more occluded by faded colors and white mist in every region. 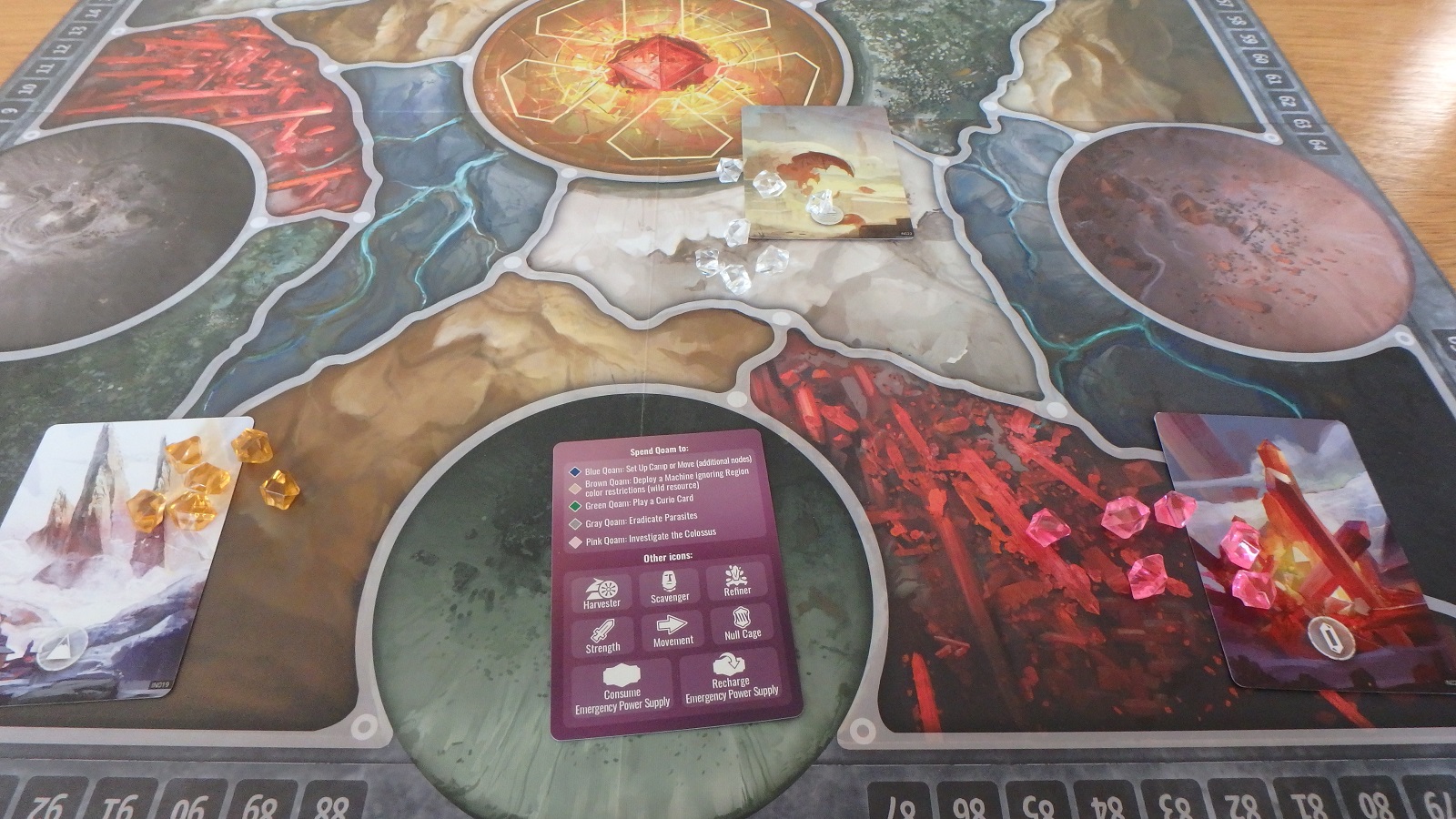 Moving on, Icaion is a long and cumbersome teach. In keeping with most points salad euros, there are a bevy of different actions that players can perform on their turns, and only one is even mildly straightforward. For example, if a player decides to build a machine, they first have to make sure that the machine that they’re building is their first in that region, the furthest left on its row on their player board, and then also that noone has already built a machine of that type in that region. They then spend an amount of crystals equal to the number of machines in that region plus one. These crystals have to be of the region’s color or brown, which are wild for the purposes of building. Then score victory points equal to the number of crystals spent times the number of adjacent like machines, unless there are none, in which case you always score a minimum of the number of crystals spent. Got that? Now repeat that for every one of the games actions, the round and year progression system, and end of game scoring, all of which feature their own minutiae. The worst part of this is that setup for a game with fewer than five players requires everyone to place non-player machines, so you have to make sure that everyone thoroughly understands the game before diving in, since players will be making important decisions before their first action.

I could forgive the long and complicated teach if the game offered interesting decisions, but Icaion’s resource management mechanic works to limit viable decisions down to three maximum valid paths on any given turn. When players harvest crystals, they either place them into an empty storage space or remove all previous crystals from one in order to place the newly harvested crystals. In case you didn’t immediately realize it, this means that on any given turn, if players don’t have an empty storage space, the optimal play is to perform the action that spends their crystals. Furthermore, the multipliers for machine building based upon already built machines force players into a staring competition over when they finally get to perform the most physically rewarding motion of taking one of their chunky minis off their player board, revealing an upgrade, and placing it onto the map. 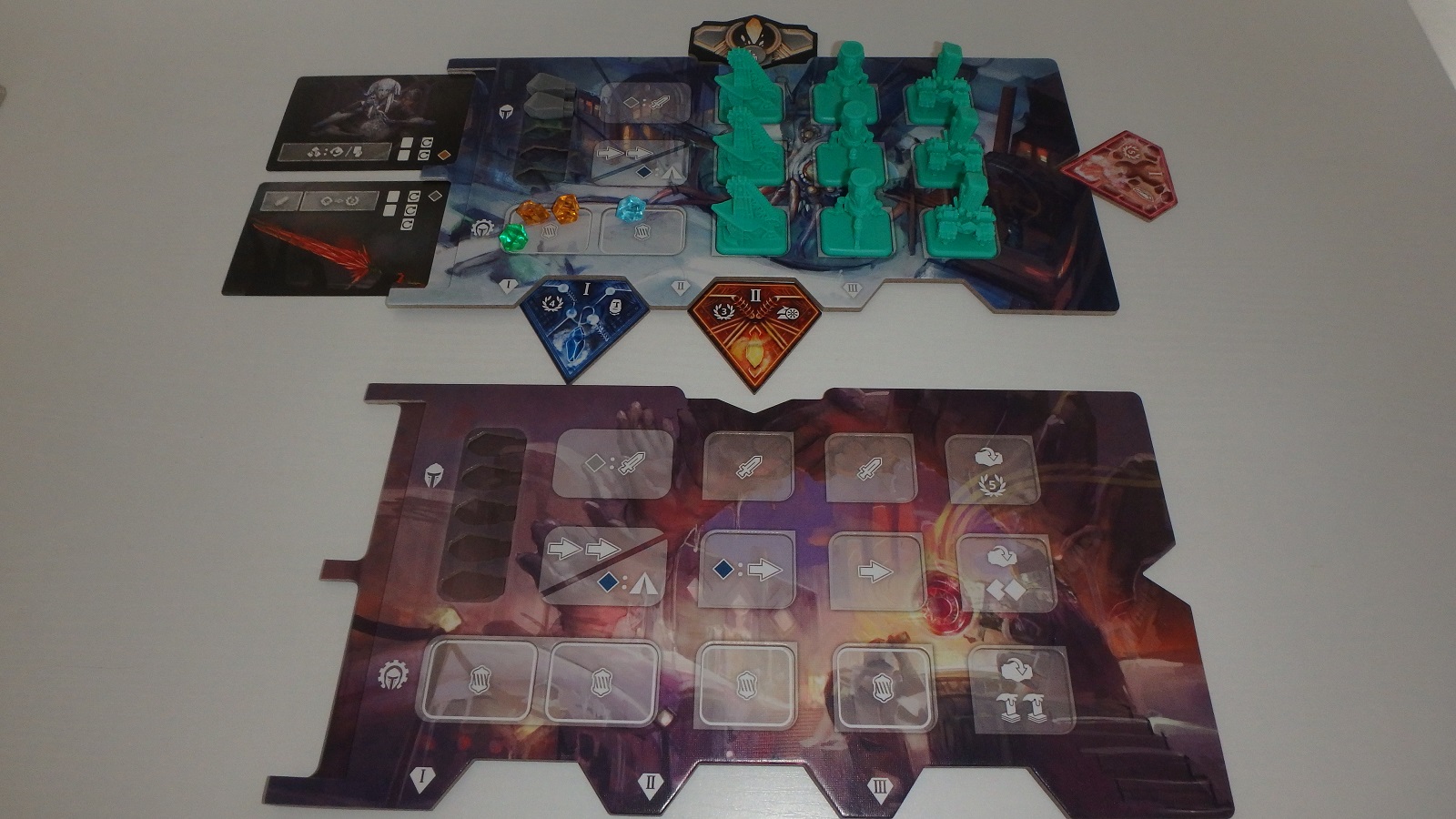 These problems are all exacerbated by the continued exclusive use of iconography. Once again, just like in Mysthea, Icaion strives to be language-agnostic by having all in-game information communicated through icons. However, once again, these icons aren’t exactly intuitive, and commit the cardinal sin of sometimes meaning different things in different places. Particularly egregious is the attack icon, which on the colossus cards will wound all players in adjacent regions, but when on a curio card, wounds players adjacent to the player. A brief aside that has been mentioned in other reviews of Icaion- the attack curio cards feel extremely out of place in this game, since Icaion features no other direct player interaction and there is no way to know they are coming or defend against them.

All of this culminates in a game that I want to like but honestly don’t know who to put it in front of. The beautiful aesthetics and naturally pathed gameplay suggest this would be a good game to put in front of my friends and family that are looking to the next step into board gaming, but the long and complex teach will inevitably trip them up or have them checked out. So I could play it at a game club with seasoned gamers, but I tried that, and they felt railroaded by the minuscule decision space. I’m sure there’s a group out there that are somewhere in between that Icaion will sing for, but I haven’t encountered them, and as such, I have trouble recommending it.

A quick aside- part of the marketing for Mysthea and Icaion was that you could combine the two games to create a third, cooperative game named Mysthea: The Fall. After trying it out, I definitely would not recommend anyone bother playing it, let alone purchase either game for it. Coming in, I was equal parts intrigued and concerned that it was more a marketing gimmick than anything else, and oh boy, was that concern immediately validated. It suffers from the same overlong teach and simplistic gameplay that sank Icaion for me, with the added issues that you’re using components that just obviously weren’t made for it and therefore feel out of place. All this is to say, if you want to get Mysthea and/or Icaion on their own merits, definitely do so, but if you get both, I’d suggest leaving the material for The Fall back behind the inserts where it belongs.

Icaion is a gorgeous game just like its Kickstarter brethren. Unfortunately, just like all too many of them, Icaion suffers from a plethora of questionable design choices that leave me wondering just who this game is for. The rules explanation is too long for fresh blood, but the decision space is too narrow for grizzled veterans.

Nick grew up reading fantasy novels and board game rules for fun, so he accepted he was a dork at an early age. When he's not busy researching the intricacies of a hobby he'll never pick up, Nick can be caught attempting to either cook or befriend local crows.
Related Articles: Icaion, Tabletop
Share
Tweet
Share
Submit