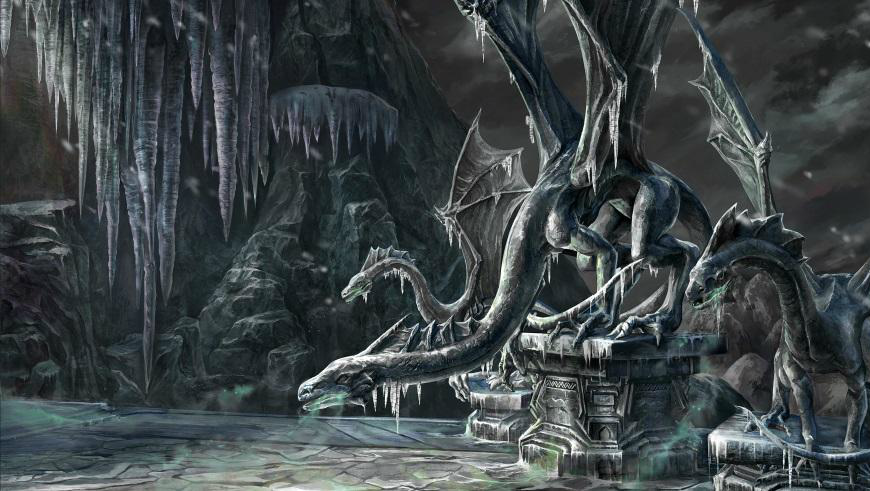 Elder Scrolls Online: Dragon Bones is the latest in a series of Dungeon based DLC releases for the popular MMORPG. These releases are small additions to a large game that mainly provide content for the most seasoned of players, and Dragon Bones is no different. However, attached to this release is another big content update that is free for all players and has a much more impactful set of changes for the game at large.

Elder Scrolls Online has morphed over time from a very clunky, limited experience to one that is inclusive, expansive, and increasingly streamlined. These latest changes to the core game provide more smoothing of certain aspects related to inventory management (a mundane but time consuming part of the game) and open up new avenues for character customization. The aside of two well designed dungeons with creative boss encounters within makes this one of the most successful updates to ESO to date, but none of the updates come without their own issues.

The dungeons are the crown jewels of this update, and can be accessed either by paying the monthly premium subscription fee, or via purchase in the game’s online store. There are two of them in this release: Scalecaller Peak and Fang Lair. Both are lengthy and have some new experiences within, but Scalecaller Peak rises above its counterpart in terms of a new experience.

Scalecaller Peak is a lengthy slog through icy mountains and poison-laden putrification. Zaan, an ancient and long-dead dragon, has a grand and sprawling temple, now occupied by a disgusting band of poison laced cultists and a never ending supply of tainted ogres and skeevers.
It also should be noted that the first portion of the dungeon, when viewed on the map, looks like a duck being pecked angrily by a woodpecker. If that isn’t a bit of added value, I do not know what could be.

This dungeon is lengthy with several indoor and outdoor sections. The main focus of the enemy forces is the aforementioned poison, which is a severely underrepresented theme for the dungeons already present in the game. Splotchy zones of damage appear throughout the rooms and corridors from both enemy attacks and corpses. There is a lot of work that goes into simply staying alive even in the most simple of moments.

The bosses in this dungeon are all fun, but a few also challenge players in a way that other dungeon presences have not. The first boss encounter is with a pair of pestilent ogres both strong enough to stand on their own. The bulk of the dungeon bosses from there are challenging but overall nothing special, including a gargoyle that dies far too quickly to make use of an otherwise intimidating petrification effect. The final two bosses, however, are a pair of cultist fanaticals that are the hardest pairing of bosses I’ve encountered in any of the game’s dungeons yet.

The other dungeon, Fang Lair, is no slouch in terms of difficulty or layout, but doesn’t have the same variance in experience, nor the same level of interesting boss encounters that the other dungeon presents. More focused around skeletal undead, this dungeon is far more straightforward and easy to surge through. The aforementioned Zaan is a long dead effigy of the dragon filled past, but his skeletal remains make a powerful foe nonetheless.
Regardless, I feel like this dungeon far more so represents a hamfisted attempt to force dragons into this game. The Elder Scrolls franchise is bootstrapped by their own lore to have dragons as a distant memory or legend to most all of the time frame established so far in their world.

I know that it must be frustrating for them to not be able to have a fun dungeon filled with dragons of all types to both serve as a tie in to Elder Scrolls V: Skyrim, as well as just to have the benefit of including such a popular creature in their game. It feels like this is the best they can do given the circumstances, and it doesn’t serve to provide me with a good dragon fighting experience, nor does it feel like an organic inclusion into the world, despite its roots in Elder Scrolls lore.

Beyond the dungeons, this release also brought in a litany of small but notable changes to the game. Gear in your inventory now tells you what the style of the item is. Crafting stations now hold your previous settings from station to station, rather than resetting after a few uses. Changes like these aren’t going to make the game suddenly sparkle, but they certainly help to smooth out rough edges in small but appreciated ways.

Two non-dungeon related major releases with this latest update are in the form of house storage and the new outfit station. The housing storage system provides two separate styles of container, one that holds 60 items and one that holds 30, and each of those can be bought in 3 forms, giving you a possible 270 extra slots of storage space. With a bank that is expensive to expand and the need for space constantly looming, this provides players a place to store their wanted but unused gear and other not readily needed items away, while opening up precious bank space.

The Outfit Station replaces the Dye Station, and is a much more complex but sneakily greedy version of that now defunct station. Rather than allowing just color change for your equipment, the outfit station allows you to change your entire gear’s appearance, based on your learned crafting styles. Also, for the first time the Outfit Station will allow you to modify the colors of your weapons.

This is really great in a way, because it gives you the ability to have any look you want to create for your character. Use heavy armor but want to look lighter? Outfit swap to light armor and you’ll look like the breeze. Want to show off some rare motif you’ve completed? Fully customize to the style for all items and strut. There are a ton of options available here and this could have been an incredibly fun and usable tool.

However, the game has decided that you should pay in-game currency, gold, to make these changes. Some of the changes are cheap, but others are quite costly and each time you make modifications, regardless what you choose, you’ll pay. There is a glitch currently where the use of a helmet of any kind will result in freakish looks when you pair that with an in-game “hat” item, which normally would just modify your current look naturally.

To fix this, you have to remove the helmet from the outfit which can only be done at a station. Once removed there you can wear your hats normally, but if you then try to put the helmet back into your outfit, you’ll pay gold again for the privilege. I suppose all the gold payments is to keep players from changing their outfits everyday or constantly, but who cares? Why limit that portion of the game? With all the time and hard work that goes into finding these motifs, it sorta spoils the fun to make it so costly.

Of course, this is another way for ESO to attempt to bring real dollars out of the wallets of their users. You’re given a free outfit slot to start, but any additional are paid for with cold hard cash. You can also buy “outfit tokens” to change your outfit without limit sans gold cost. So, while this expansion is definitely a good one in theory, and works relatively well with only a few strange glitches, the costs involved with both in-game and real money are hard pills to swallow and make what could be a frequently used element in the game a one-and-done situation.

Elder Scrolls Online: Dragon Bones is a fine expansion of the game and a cleaning up of certain elements within the core game. There is a ton of good-to-great content to be had here, but the bulk of the must-have updates came free to all users. There are some issues to be had with those updates, particularly the Outfit Station, but overall they are nice upgrades and came free. The paid DLC, which includes two expansive dungeons, is also fine, fun, and well worth playing, but is difficulty restrictive to all but seasoned players well versed in game mechanics.

Patrick Rost has been with Gaming Trend since 2013. At first focused on sports coverage, Patrick has gone on to cover a wide range of games and other products for the website. Outside of Gaming Trend, Patrick writes and records music, grinds perpetually in Elder Scrolls Online (PS4), and lives day to day with his two dogs, Bob and Stella.
Related Articles: Elder Scrolls Online: Dragon Bones
Share
Tweet
Share
Submit