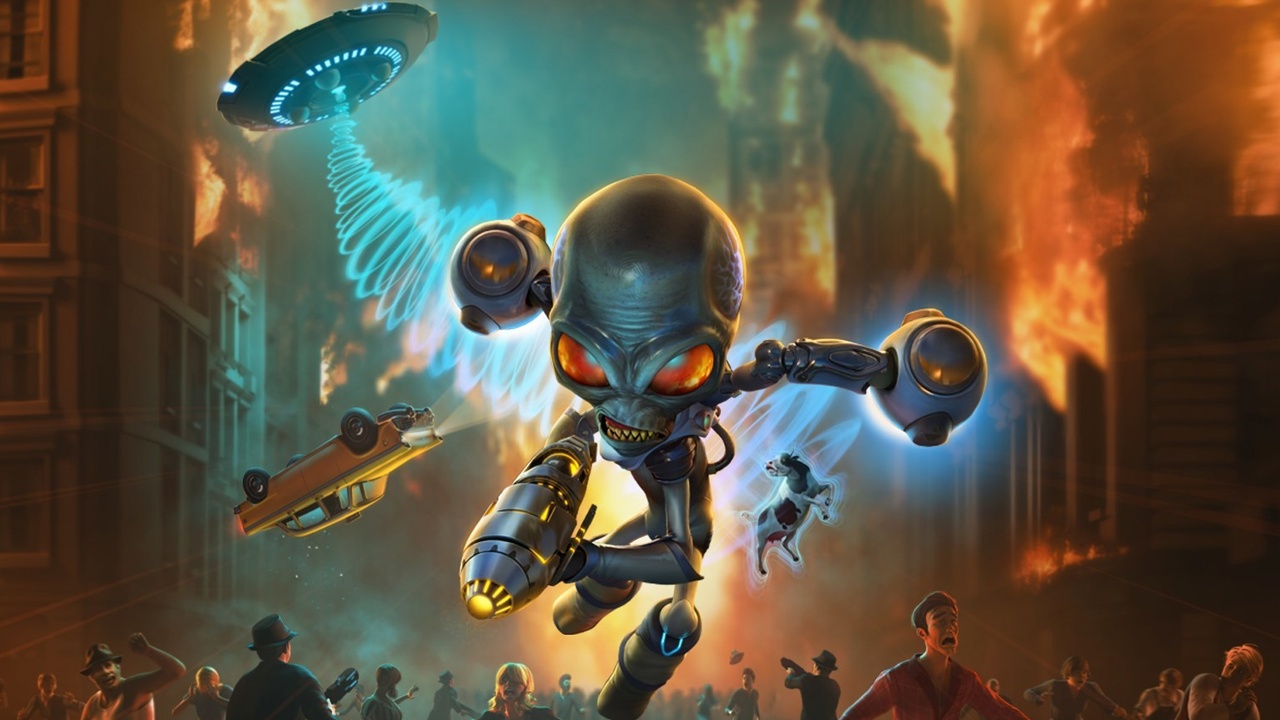 It’s crazy that it’s been 15 years, almost to the day, since the first Destroy All Humans! was released on the original Xbox, PlayStation 2, and Wii. THQ Nordic felt like it was time to not only bring Crypto back to life, they also wanted to rebuild it to look gorgeous on modern platforms. Releasing on Xbox One, PlayStation 4, and finally getting a release on PC, this version isn’t just a graphical remaster, but also sports a handful of modern updates. Let’s check out the first two levels of the game for a quick taste of this remaster:

The updates to the original are so numerous that it’s hard to quantify them all without a side-by-side comparison, so that’s what we’ve done. The team at Black Forest Games rebuilt the entire game’s art assets from scratch, and watching this video side by side you can see they’ve added a few things here and there (e.g. Crypto stepping in a pile of cow crap), meaning they will not line up perfectly. Still, it’s immediately apparent that this isn’t a remaster as much as a complete overhaul. Grass is everywhere, a lighting engine has been introduced, water looks gorgeous, 60fps, 4K resolution, animations are infinitely better, and poly count? Well, I imagine there are more polygons in Crypto’s new left ass cheek than in the entire model on the original — we’ve come a long way in the last decade and a half.

As faithful as the game is to its roots, there are a few new tricks up Crypto’s shiny silver sleeves. First and foremost, Crypto can now walk and chew gum at the same time. More accurately, he can use two abilities simultaneously. This means he can be lifting one poor hapless hayseed with his PK ability while also popping the fragile meaty skulls of a wandering meatbag to extract their delicious brain-soaked DNA. Similarly you can electrify a bunch of cows with the Zap-O-Matic while hurtling another into a nearby lake. A new lock-on system lets you easily rain death and anal probes from the sky while keeping the action trained on the correct target. Flying mechanics for Crypto’s jetpack feel more fluid and omnidirectional, whereas the original felt stiff and fairly locked into the four cardinal directions. Hopping into Crypto’s spaceship, you’ll find a lot of fresh animations on every surface. Little lights flicker and spin, and the glowing portions along the flanks of the ship do, in fact, now glow. It’s clear that the team spent a great deal of time ensuring that the control scheme matches the current generation of games. They’ve succeeded wildly.

The ray gun on the spaceship unleashes death and destruction, and that’s all been given a great deal of polish. Explosions now have better, albeit stylized, smoke and fire plumes, and as buildings explode they send debris flying in all directions. In the original, fires went out almost immediately and the thought of spending computational cycles on debris in 2005 was entirely anachronistic.

The only real complaint I have with Destroy All Humans! is the voice work. While the team did polish all of the audio in the game to a glossy shine, even bringing back in the original voice actors to re-record their lines, there is a lot of voice repetition amidst all of the NPCs, and to a lesser extent, Crypto’s acerbic taskmaster, Orthopox. After a few hours you’ll roll your eyes at “SUPERB!” every time you hear it. 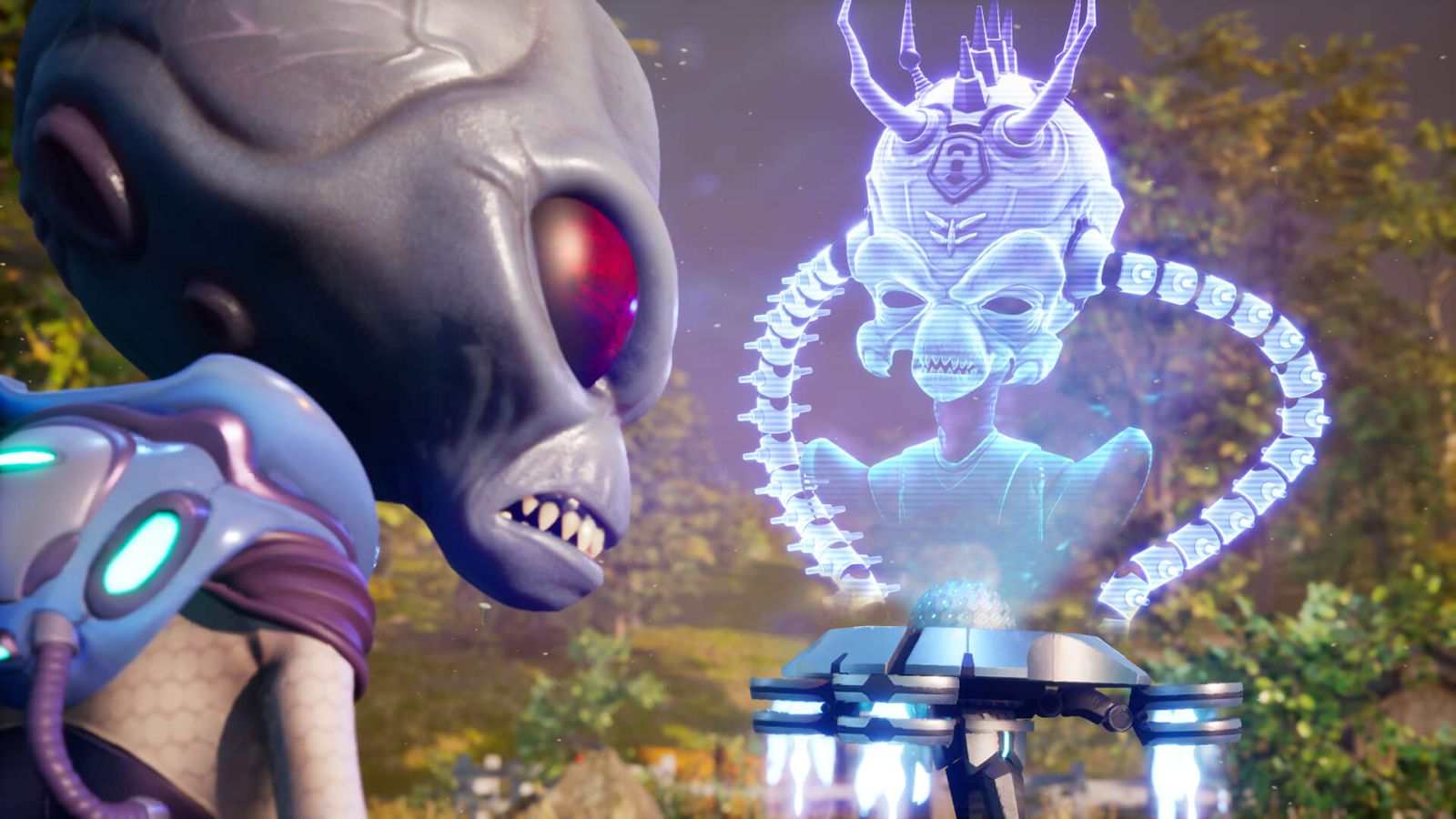 There are a few minor bugs I ran into during my play time — text seems to stretch beyond the edges of the screen when running at 4K. I’m sure this’ll get patched out, but it’s there nonetheless. Similarly I ran into a checkpoint in a mission where my nuclear-loaded truck spawned and instantly died thanks to exploding irradiated bovines (it’s a thing). Restarting that mission was easy enough, bypassing the problem. I’ve also run into the occasional framerate hitch where the game will plummet for a brief moment during fits of heavy action. It’s largely inconsistent, so it’s likely not a performance issue as much as a bug. These little hiccups are extraordinarily small nits against a surprisingly well-polished title.

Black Forest Games could have probably stopped at rebuilding the entire game from the ground up and we’d have all been happy, but clearly they weren’t. Instead, they dug through the trash cans, under the couch cushions, and a likely very dusty cutting room floor until they found an unreleased level. This entirely new level is called the “Lost Mission of Area 42”, and it’s great to see it brought to life — well done to Black Forest Games for this cherry on top. 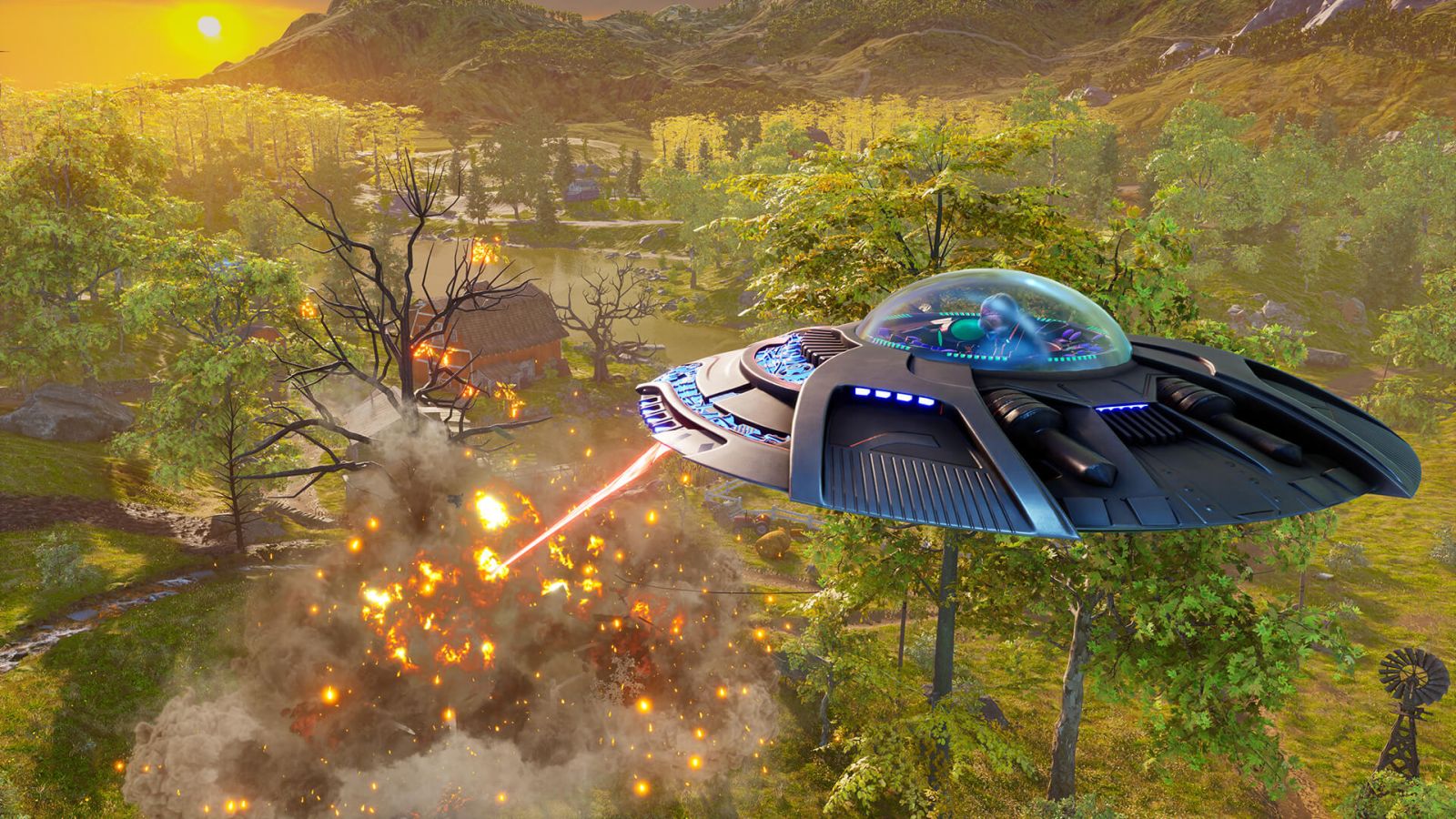 In total there are 22 missions, constituting about 11 hours of gameplay in Destroy All Humans!. You can revisit any previous mission to try to eek out additional Furon DNA from optional sub-objectives. You can also hit optional challenges like racing, causing carnage, destroying buildings, and more for more DNA. All of this DNA feeds your upgrades, letting you upgrade your various weapons for Crypto and his ship. None of these upgrades are required per se, but they do make the more difficult missions a little easier going. Besides, where else can you tackle a mission that asks you to kill dozens upon dozens of cows, giving you bonus points towards a 3-star rating if you electrocute or BBQ them? Mmmm…BBQ…

THQ Nordic’s purchase of most of the intellectual property of defunct publisher THQ in 2013 continues to pay dividends for us the players. Destroy All Humans! is easily one of the very best remaster/remakes we’ve seen from any studio, and it’s clear that Black Forest loved this project enough to make it the very best version of itself that it could be. At a launch price of just $29.99 on PC ($39.99 on consoles, but Amazon already lists it at $34.99 right here) it’s a steal. Chop chop, little monkey — it’s probin’ time!

Rebuilt from the ground up in every way, Destroy All Humans! (2020) puts every other remaster on notice -- this is how it’s done.

Ron Burke is the Editor in Chief for Gaming Trend. Currently living in Fort Worth, Texas, Ron is an old-school gamer who enjoys CRPGs, action/adventure, platformers, music games, and has recently gotten into tabletop gaming. Ron is also a fourth degree black belt, with a Master's rank in Matsumura Seito Shōrin-ryū, Moo Duk Kwan Tang Soo Do, Universal Tang Soo Do Alliance, and International Tang Soo Do Federation. He also holds ranks in several other styles in his search to be a well-rounded fighter. Ron has been married to Gaming Trend Editor, Laura Burke, for 21 years. They have three dogs - Pazuzu (Irish Terrier), Atë, and Calliope (both Australian Kelpie/Pit Bull mixes).
Related Articles: Destroy All Humans!, Let's Play
Share
Tweet
Share
Submit