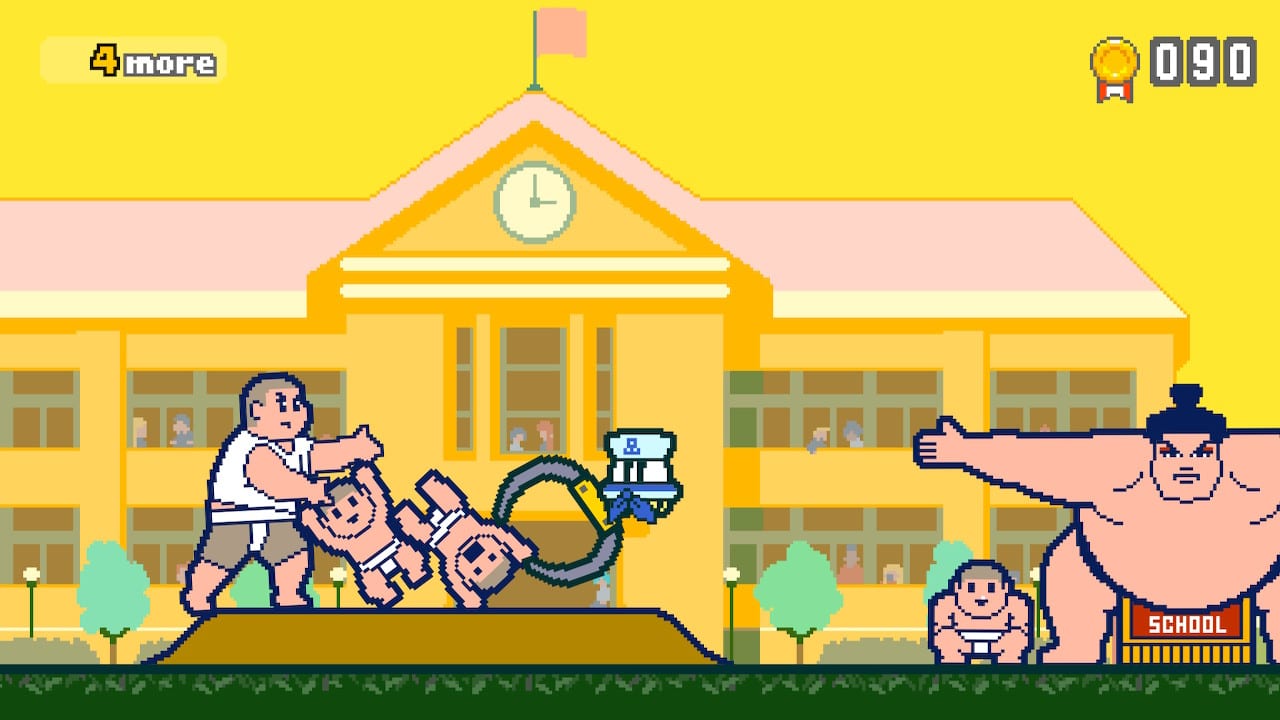 Part Time UFO is in the running for the feelgood game of 2020, and that’s in a year with Animal Crossing: New Horizons and Bugsnax. Released a while ago on mobile, HAL Egg, HAL Laboratory’s mobile wing, created a title that’s part-physics puzzler and part-job simulator all executed under a Japanese UFO crane machine. While the game did have reach as a smartphone game, this expanded Switch version adds a ton of content which makes this a must-buy for anyone that wants a cute little puzzle game to relax during this crazy year. 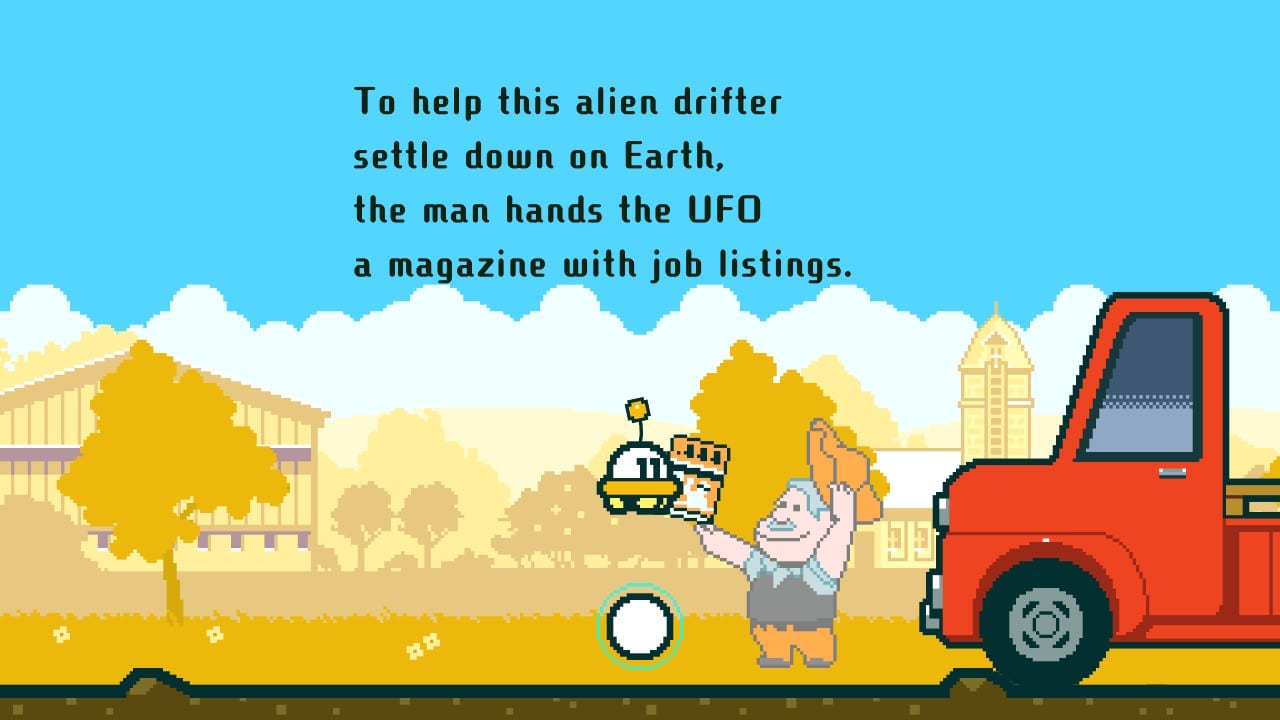 At first glance, Part Time UFO is one of the most mundane concepts; you control Jobski, a curious little UFO that wants to experience the wonderful world of odd jobs. You do this by controlling a crane and dropping it around the stage. While the main mechanic of lifting an object up and putting it down onto a platform is present in almost every stage, there are a number of distractions and gimmicks you need to navigate in order to succeed. You’d think Jobski is a one-trick pony, but Part Time UFO does an excellent job making the experience innovative and unique for its duration.

The first job requires you to help a farmer move boxes into his truck, but after this initial, things get a little wackier, such as balancing a bunch of hamsters on an elephant in a circus, fixing up a museum exhibit after it’s shattered, and even making a delicious stack of pancakes. Each main job scenario is split up into three missions each, but they’re scattered around in different pages so you won’t experience the same job consecutively. 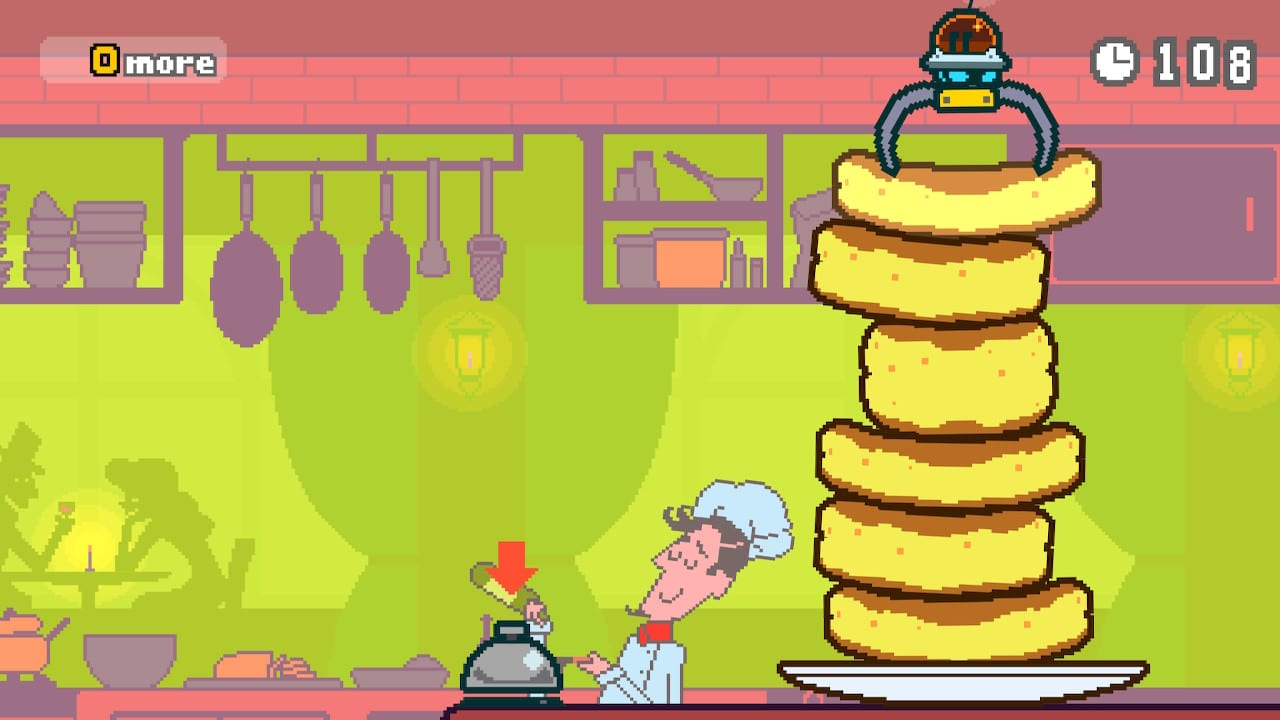 In the beginning of each job, you’re given a main goal to achieve plus three hidden goals that will provide medals and extra pay if you decide to pursue them. While some of these medals are straightforward (finish the task within the time limit or don’t make the tower of monkeys drop once), some of them are a bit more cryptic, with only the picture icon giving you a hint. It’s not a complicated riddle most of the time, but the requirements are tricky enough that you’ll need to be smart in figuring them out. It makes for a replay value incentive, and that’s pretty neat. 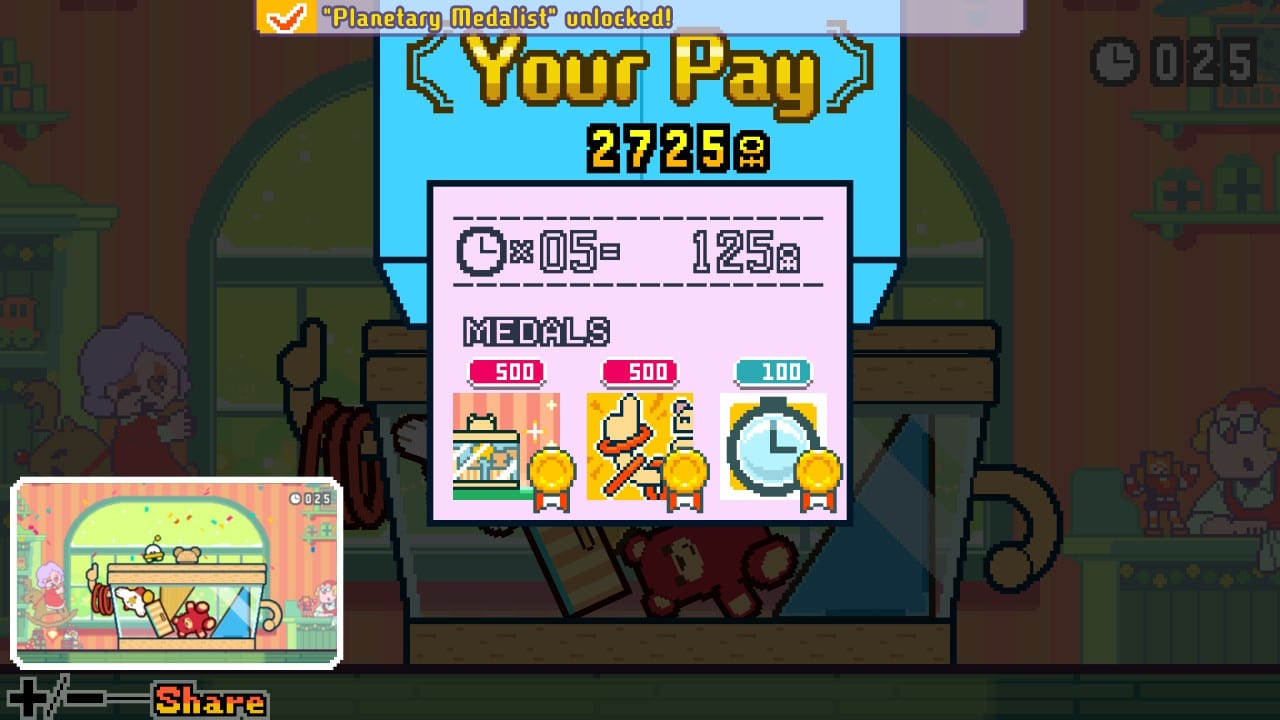 While simple to control, Part Time UFO does a great job at being challenging yet fair with its floaty physics; they’re light enough that if you try to recklessly navigate through the job, you won’t attain medals or high earnings. Slow and steady wins the race for most of the game, and the level design encourages some precise thought with a time limit that is generous if you’re aiming for a time medal. You can earn more time when placing a new object onto your pile, but for most stages, timing out won’t make you lose, so it’s more so a way to challenge your speed and precision than anything else.

The transition from a portrait orientation smartphone to the widescreen orientation Switch is a noticeable one, but one that makes all the difference. While the stages were made for a smaller phone screen, here they’re widened a little. For those who are experiencing Part Time UFO for the first time, this won’t be an issue, but Jobski veterans might be a little disoriented with the extra leg room here. It doesn’t make for a worse experience, but some of the compact puzzle stages feel a bit barren in comparison to the new Toy Store stages, for example. There’s also a lack of touchscreen controls in this version, which I feel is a missed opportunity, especially since the mobile version worked perfectly with them. 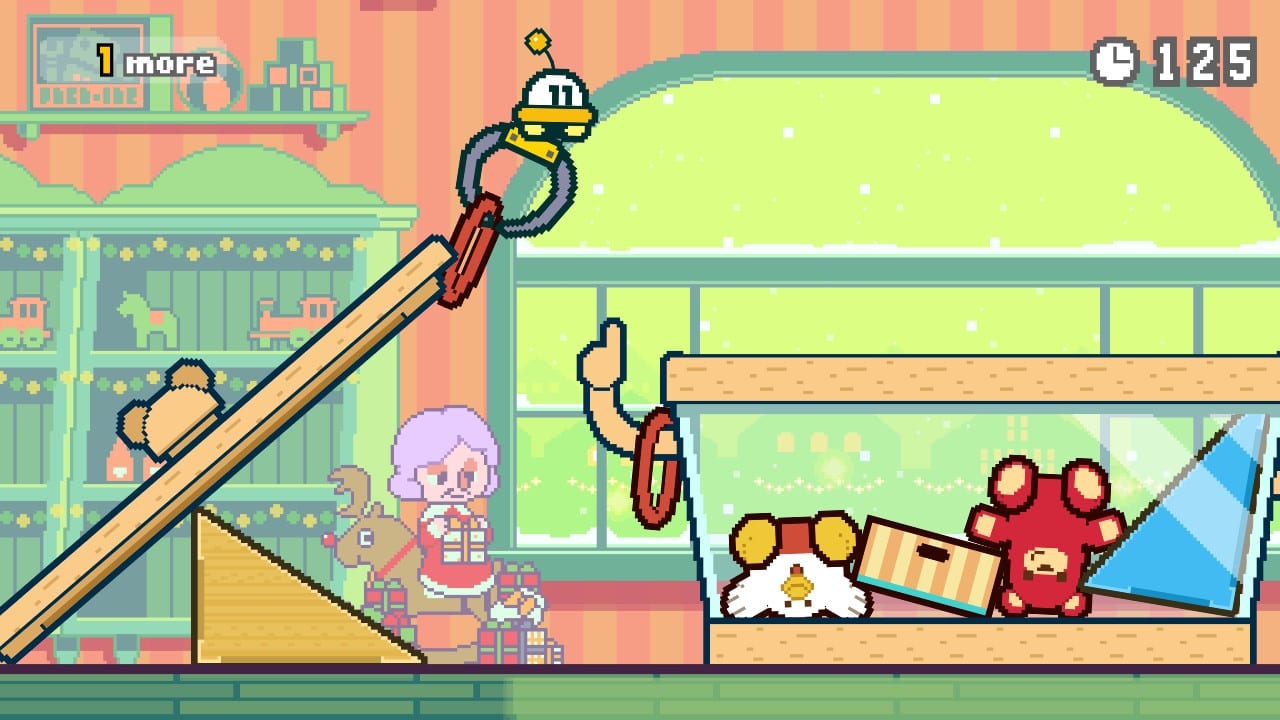 These Toy Store levels do take full advantage of the widescreen aspect ratio, however.

Other than those two qualms, the rest of the game is awesome. The 2D pixel-esque style works wonders, and playing this game docked makes everything pop in a delightfully wonderful way. The bright colors are engaging to look at, and match the silly atmosphere of the game perfectly. The music, which is one leitmotif played with numerous variations, is minimal but infectious. I was playing through the game the other night and by the time my play session was completed, my brother was humming the notes for hours. It’s Baby Shark levels of repeatable, for better or for worse. 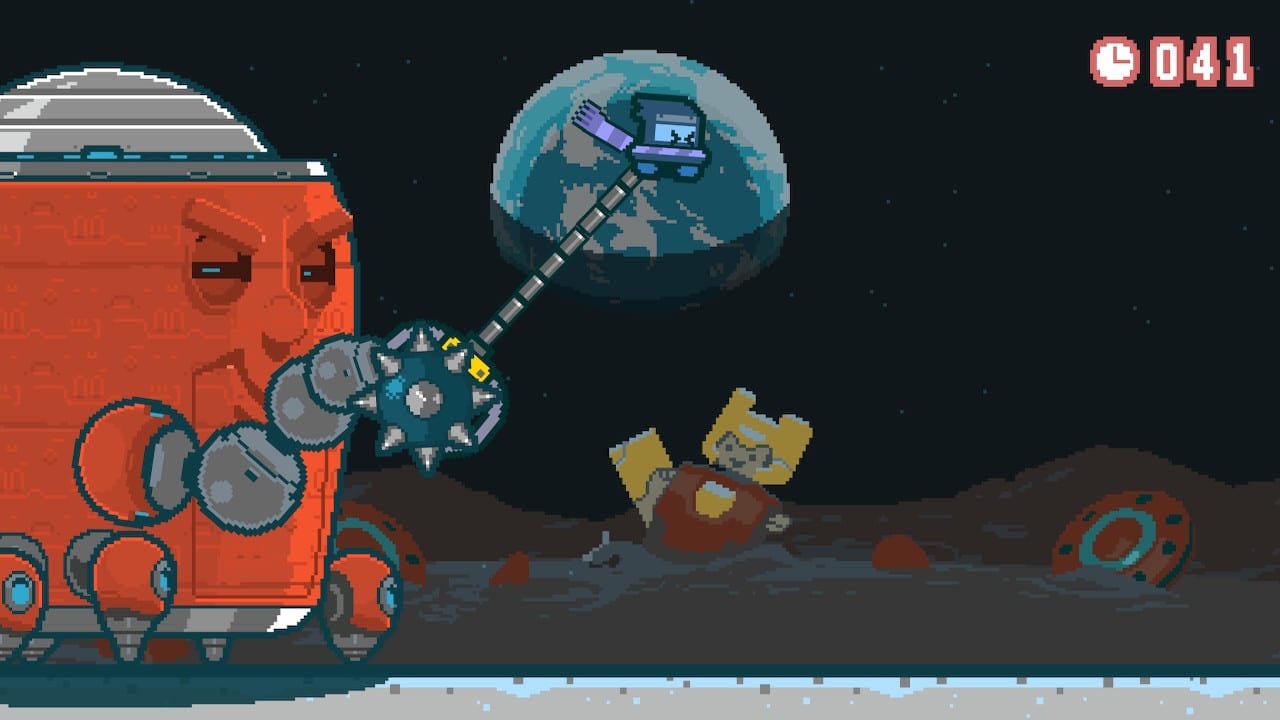 I love how they make the theme an EPIC SPACE OPERA with the Moon levels.

And now we get to the main draw of the Switch version of Part Time UFO: The added content! Sure, this version of the game is more than twice as much as the original version ($8.99 USD compared to the mobile’s $3.99 USD), but it also comes with a host of new features and content. For starters, BoxBoy’s Qbby appears in more stages! (Well, that’s more of an aesthetic change, but I love me some BoxBoy.) There’s the inclusion of a two-player mode, which works well considering the added screen space of stages; while the main one-player campaign doesn’t utilize the extra real estate, it’s functionally better here.

You’ve also got a “Feats of Glory” achievement system that will track things you’ve done, such as buying enough costumes or even getting your cargo eaten in a certain Ocean stage. Once you get the achievement for four in one group, you’ll unlock a cute animated picture. It’s a fun little way to add an incentive to do well in the game after you finish the main stages, and 100% completionists will get their reward. 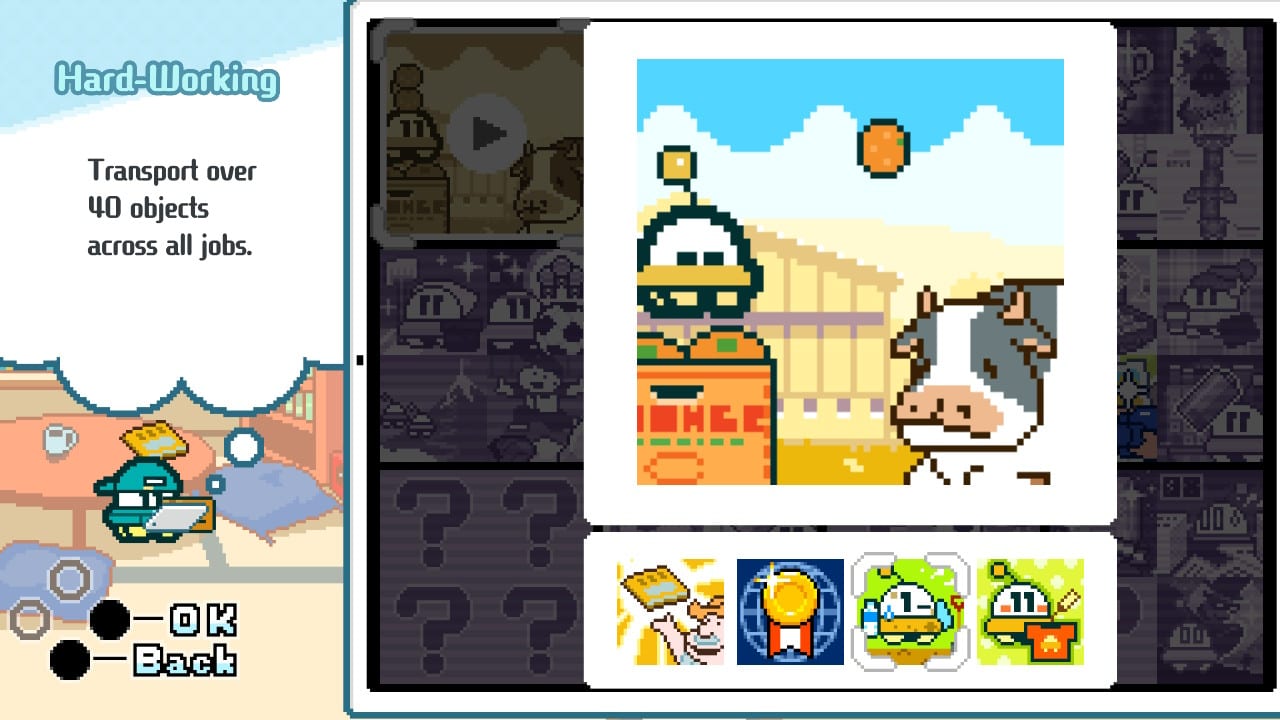 There are also two extra minigame modes that are unlocked as you finish the game. Tower of Infinity is an high-score style game where you have to stack up objects as much as you can; drop even one of them, and it’s game over. Luckily, you have the ability to place magic blocks every few objects places that will give you a little more wiggle room. It’s a fun little mode that definitely fits into the package; there are no online leaderboards, but this will appease competitive Part Time UFO players (if there is a market for that)! 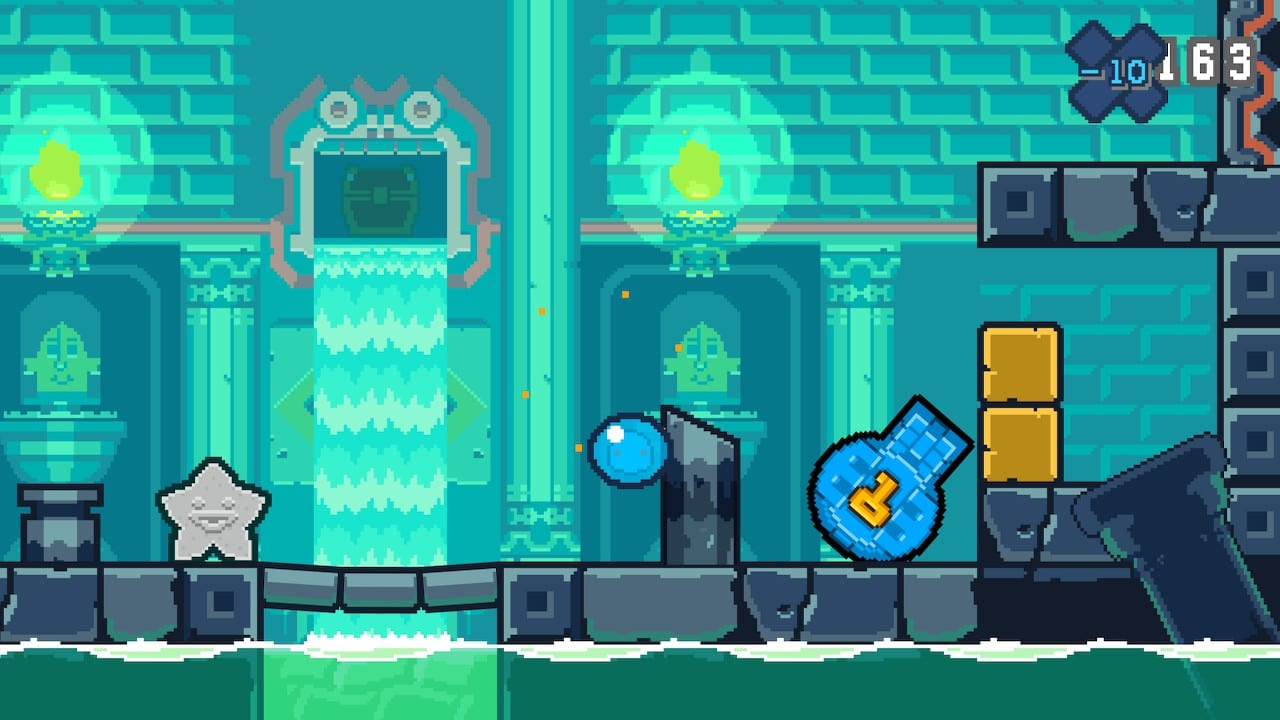 Finally, the post-game mode Treasure Island is an extended stage that can only be accessed by buying in-game plane tickets to the island. You have one shot to navigate through the whole scenario, and it acts as a difficult platformer where you’ll need to dodge enemies and even lava in order to get to the mysterious treasure. These added features make this little game jampacked with great bonuses. Even if you’ve fully cleared the original mobile version of the game, you should definitely buy this expanded port.

With a host of extras and the ability to play on a big screen, this is the definitive version of Part Time UFO. A lovely title with the cutest aesthetic in recent memory, you’ll be humming the theme song and smiling as you pick up and play this awesome puzzle title.

Elisha Deogracias is an aspiring accountant by day, freelance writer by night. Before writing for Gaming Trend, he had a small gig on the now defunct Examiner. When not being a third wheel with his best friends on dates or yearning for some closure on Pushing Daisies, he's busy catching up on shonen manga and wacky rhythm games. Mains R.O.B. in Smash. Still doesn't know if he's a kid or a squid.
Related Articles: Part Time UFO
Share
Tweet
Share
Submit