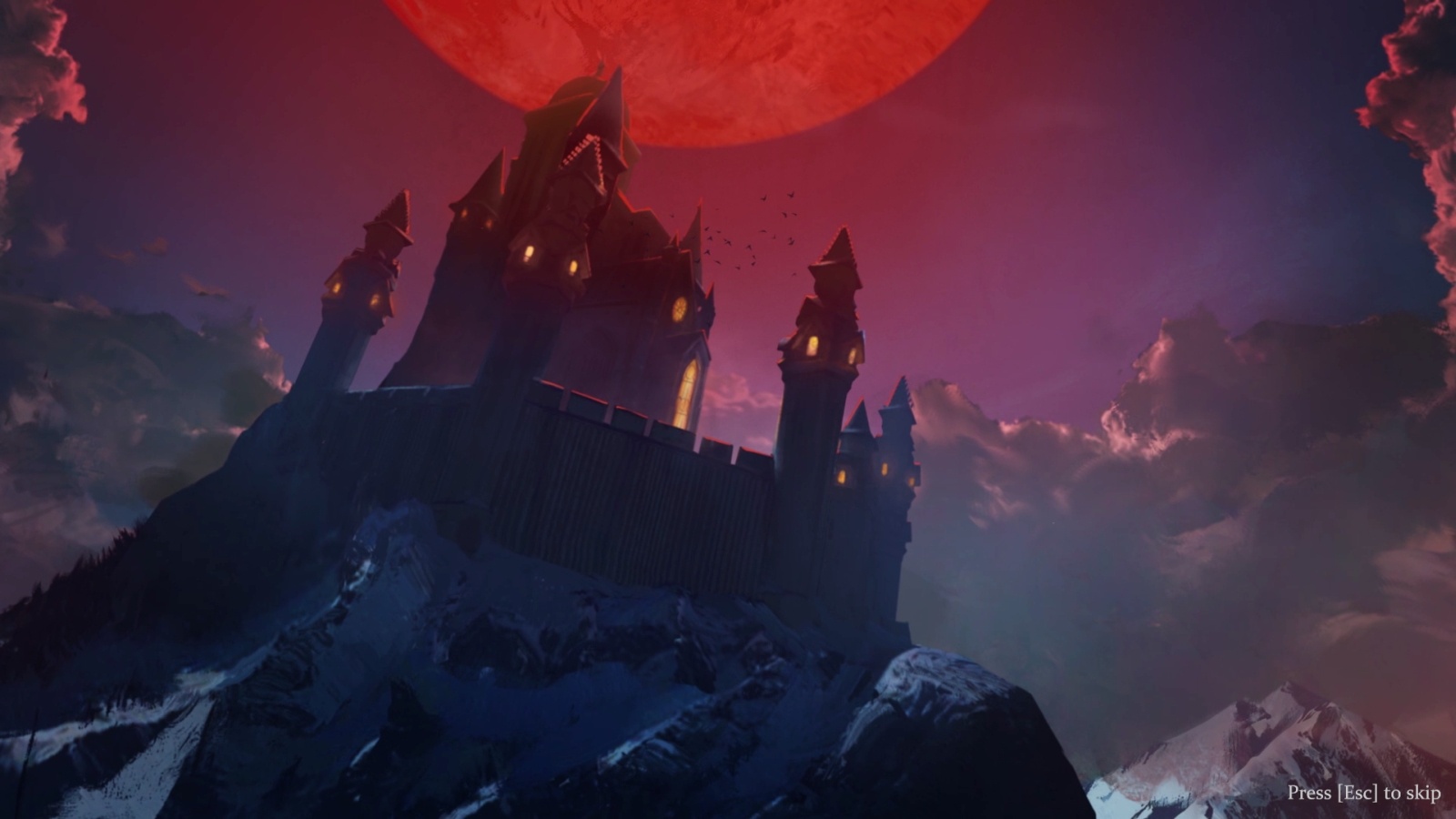 I was happy to dive back into the dark and bloody world of Immortal Realms: Vampire Wars this week to check out the full release of the game by Kalypso Media. I am instantly drawn to just about anything that involves vampires, and even though turn based strategy isn’t my strong suit, I had to check this one out. It’s got a lot of vampire clichés in it, from the names of the clans (Dracul, Nosferatus, Moroia) to the predictable storytelling, to some of the one liners that your Lord will say while in battle, but sometimes the oldies are the goodies. The clichés totally work in Immortal Realms, and it’s a fun new addition to the vampire game genre.

For those of you who don’t know what Immortal Realms: Vampire Wars is, it’s a turn-based strategy game, with some card game elements tossed in the mix. You can play through the story based linear Campaign, play your own way with any faction and any map in Sandbox, or build your own war maps to battle on in Skirmish. You can check out my in-depth beta preview from a few weeks ago here: https://gamingtrend.com/feature/previews/a-bloody-good-time-immortal-realms-vampire-wars-beta-preview/ 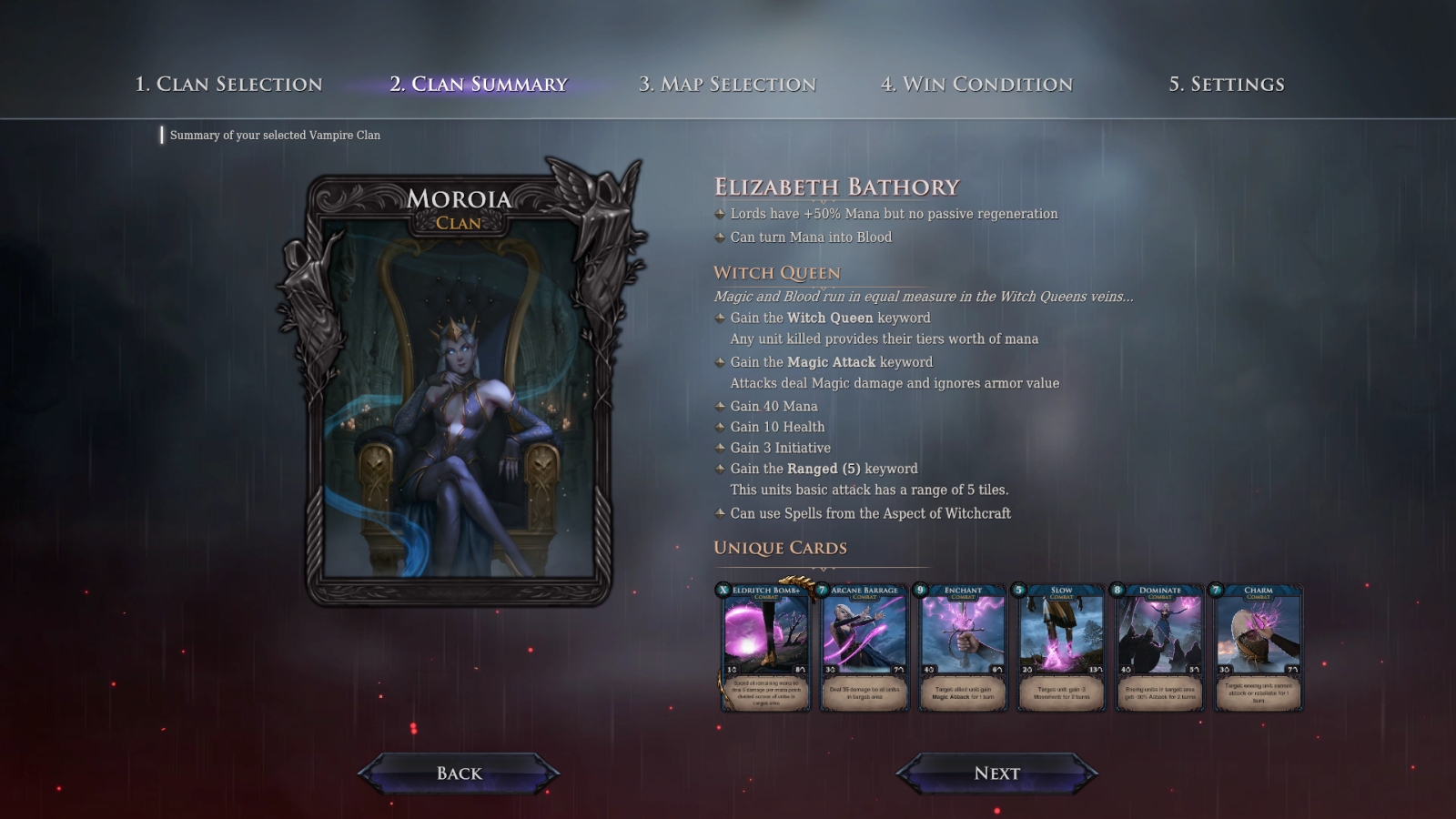 During beta, I completed the Dracul campaign, and this time I played the campaign again, and I fiddled around with the sandbox. Choosing the Moroia Clan was a no brainer for me, because it’s led by none other than Elizabeth Bathory, who just so happens to be the main antagonist in my best-selling dark fantasy series. I also tend to gravitate more towards magic users in games versus melee, and her set of cards and traits seemed very interesting. Everything from the artwork and coloring on the cards, to the snowy hills on the Esain map appealed more to me than what I saw from the Dracul campaign in beta. Don’t get me wrong, I love me some Dracula, but this was a nice change. 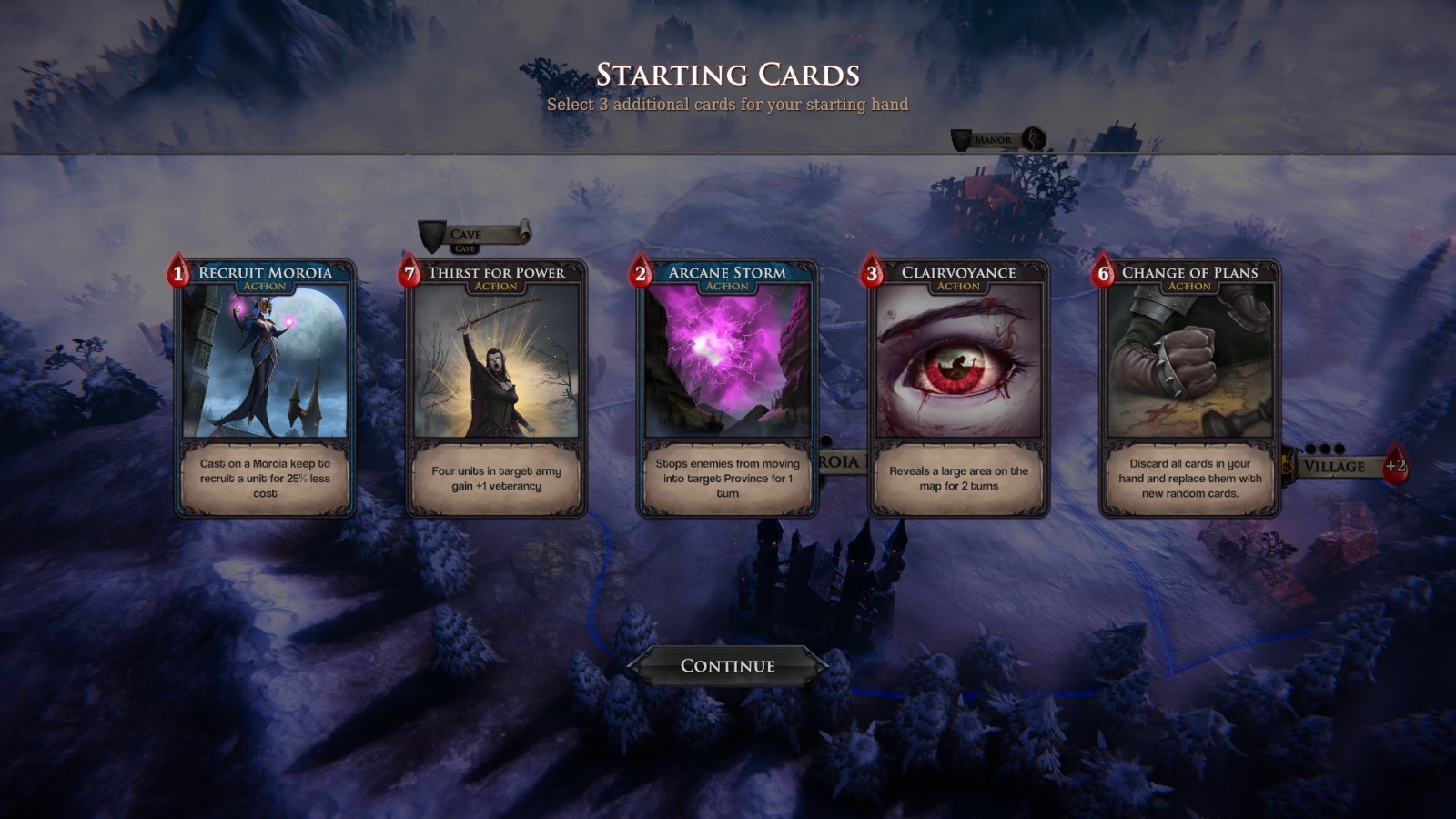 The artwork and detail on the cards is stunning, they did a great job.

The artwork on the cards in Immortal Realms is top notch, and the artists did a great job with the animation. I really feel like they brought each clan to life with both the style, and coloring; Dracul feels dark, bloody, and spooky (I can still feel the glare of that creepy, bloody eyeball from the Dracul campaign!), Nosferatus feels plague-like and evil, and Moroia feels elegant and magic-influenced. However, the cards themselves just don’t really feel like they make a huge impact on the game while in the map mode. Perhaps it is a lack of variety on cards you’re offered, but most of the time I felt like I was reaching for the same 3-4 cards. Something else to note is how the cards interact when you hover over them. More often than not, I’d find myself grabbing the wrong card, or thinking that I grabbed it but when I dragged it out to play it didn’t come out of the deck. A little tweaking by developer Palindrome Interactive to make the cards interact more efficiently would be much appreciated.

The maps are also artistically beautiful. I imagined that I was truly in a deep, dark forest somewhere in Transylvania while moving through the Dracul campaign, or in the snowy hills of Romania while playing with the Moroia sandbox. The music adds to the depth, bringing it all to life. While on the map, you can interact with buildings, choosing from multiple actions such as feed, heal, purchasing particular items from the blacksmith, or taking a card from the library. You use action points (AP) to do this, and you are limited to how many actions you can take based on your AP, including movement. Your Lord will also have a blood pool, and depending on if you’re in a blood deficit or not, actions may also drain blood. Moving across the map is done in turns, and it’s pretty self-explanatory and straightforward. 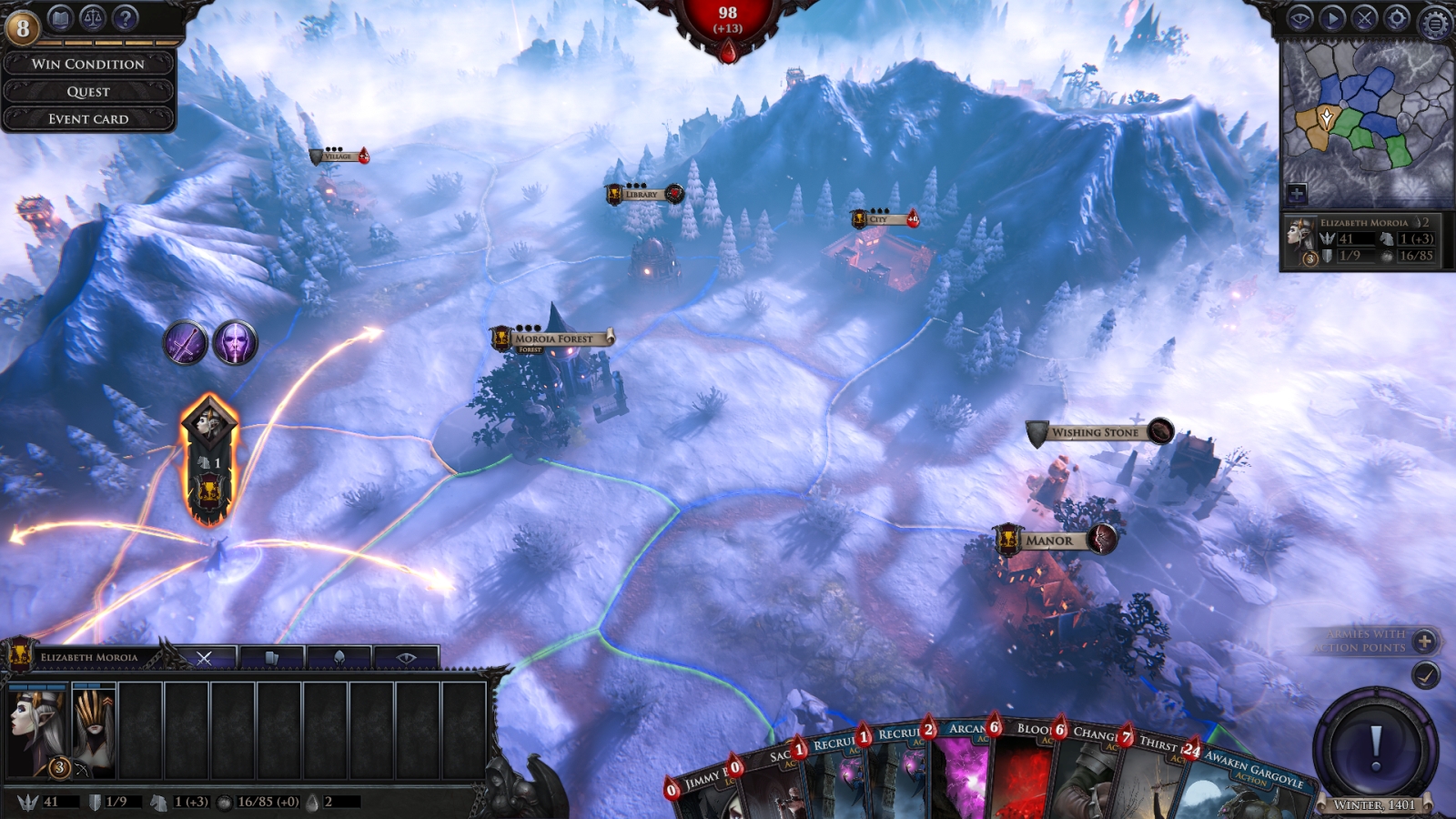 The Esain map in my Moroia sandbox adventure.

Blood is also important to keep track of, just like AP, most things you do on the map require blood. Playing cards uses up blood, and certain missions will start you out losing blood with each turn. Managing your AP and blood is key to being successful in Immortal Realms.

The battles are where I think Immortal Realms struggles most. While I did have fun, I felt like they were quite unforgiving. Once you complete Act 1 and move to Act 2 in the Dracul campaign, the difficulty really ramps up. You’ll have a pre-battle stage where you can set your units up before moving them across the gridded battlefield. There are certain “buffs” on the map that will give you benefits such as health gain each turn, or extra armor if your unit stands in one of the squares near the buff icon. These were a HUGE help to me, but at the same time also put my units at risk of being flanked. In battle mode, each Lord has a certain objective to complete to become more powerful. Your Lord will do the bulk of your damage, and as expected you want to protect your back-line and archers. As mentioned before, the cards on the map don’t feel overly impactful, but your Lord cards in battle can make all the difference in the world. Take the time to read these, and always make sure you level them up when available. 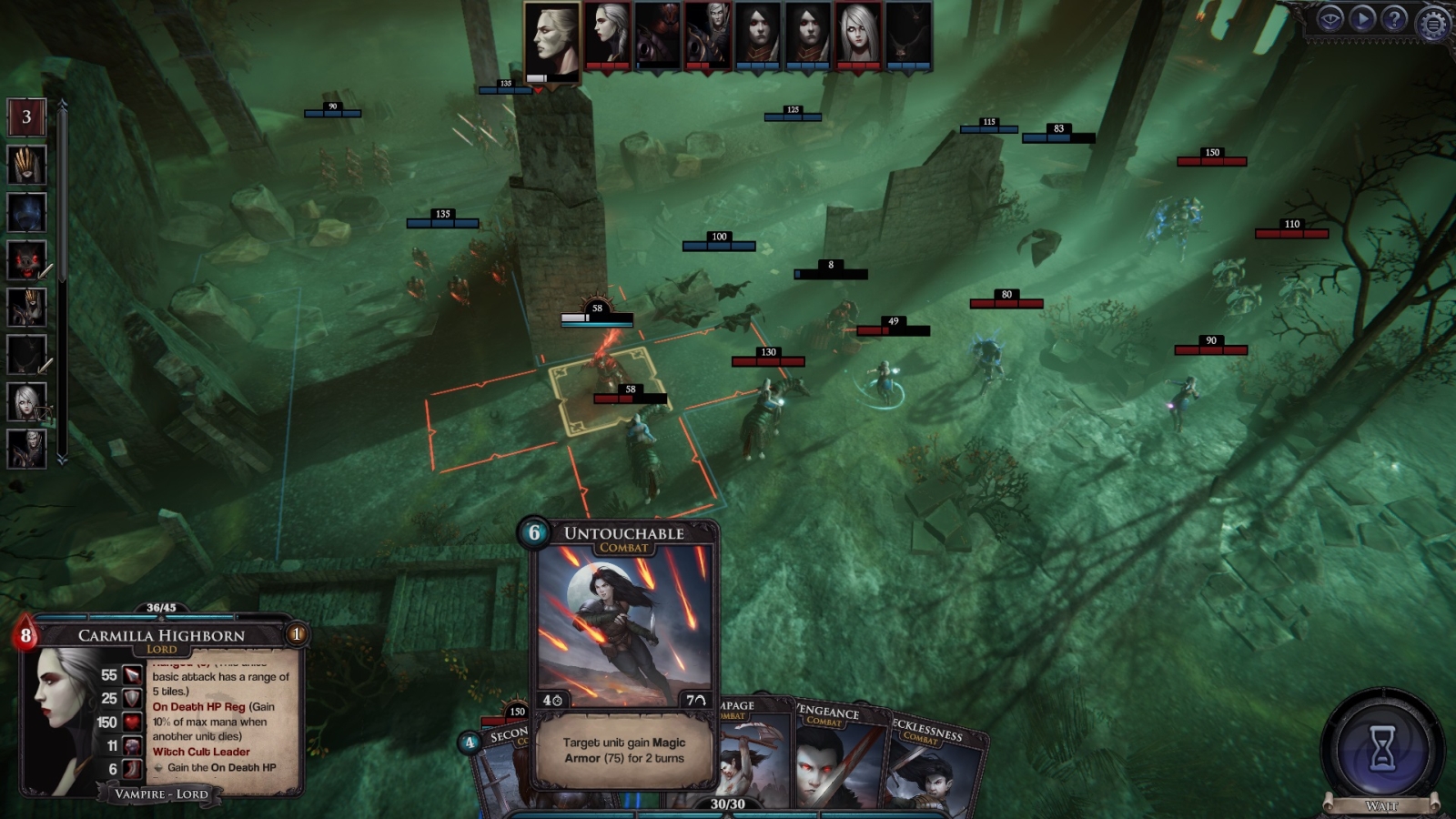 A glimpse at a fight on a battle map.

I got my butt kicked more times than I’d like to admit before I was able to win most battles past Act 1. The difficulty ramps up fast and your Lord cards will be key to your success. It didn’t feel like there were a lot of options for setting your units up on the grid, as most battle maps were quite small with a good portion of the map being consumed by trees or ruins. Mistakes are punished quickly if you move to the wrong square. I think a little tweaking, perhaps expanding the maps a little, might help solve this problem.

There were a few bugs I encountered as well. The most obvious one was not seeing the armor I equip to my Lord via card until I selected another unit then came back to my Lord. The save menu is also quite confusing and could use some work, as it’s not 100% obvious if you’ve actually saved. The game was stable for me, and I did not experience any crashes or graphical glitches.

Overall Immortal Realms:Vampire Wars was a fun experience, but I was also drawn to this game from the get-go because I am heavily interested in vampires. They did the game great justice with the artwork, lore, story-building, and music. I just think the battles could use some tweaking, and the cards on the map could have more variety. Immortal Realms is currently $39.99 on Steam.

Immortal Realms: Vampire Wars is a dark and bloody turn based strategy that hits the mark with lore, artwork, story, and music. The battles can use some work with not only making maps a bit bigger to give more strategic choices, but also the difficulty that ramps up significantly. The addition of cards in battle is quite fun, but lackluster on the map. But if you’re a fan of vampires, I think you’ll enjoy IR. Immortal Realms is currently on Steam for $39.99.

Holly Hudspeth is a best-selling author living in Fort Worth, Texas. She has six published novels to date; The Skyy Huntington Series, which is an epic dark fantasy adventure, and One Small Detail, a stand-alone medieval fantasy. Holly also enjoys writing fan fiction based on her avatars from games such as EverQuest, Elder Scrolls Online, and World of Warcraft. Her first major purchase at the established age of nine was the NES, and she has been gaming ever since. She enjoys fantasy games, city builders, RPGs, MMOs, SMITE, and The Sims franchise. Most nights she is in SMITE with her husband and friends, or playing ESO. When she isn't gaming, she is probably either at Disney or planning her next trip there.
Related Articles: Immortal Realms: Vampire Wars
Share
Tweet
Share
Submit