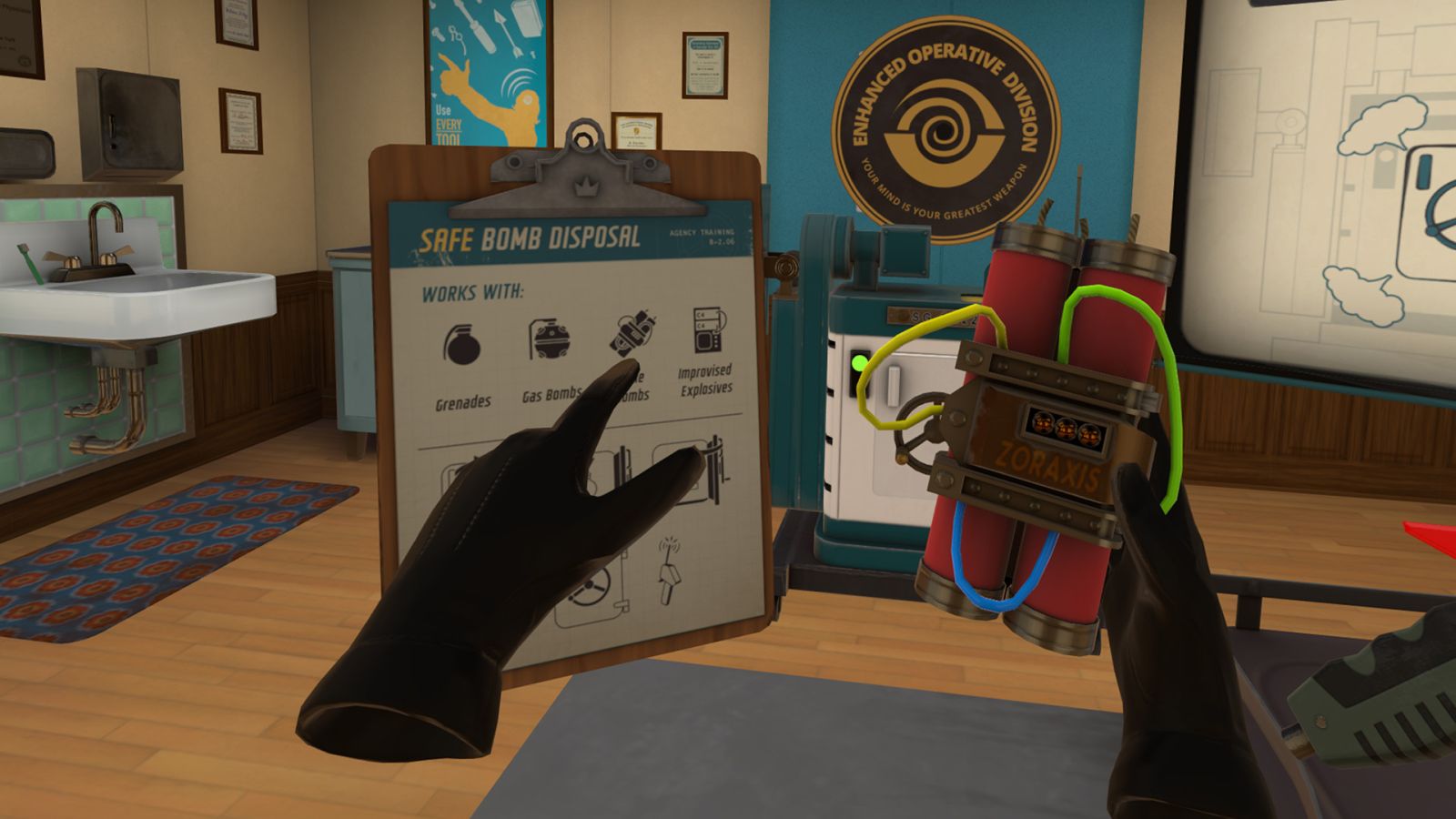 I Expect You To Die 2: The Spy and the Liar review — Virtual Villainy and Tactile Traps

There are sequels that completely upset the apple cart and diverge from the original, making radical changes that polarize the fanbase. Then there are sequels that understand that they are onto something and just look to polish what they’ve already done. I Expect You To Die 2 is the latter, and that’s precisely what we needed it to be. Diving back into the anonymous Oxfords of our silent spy protagonist, we once again return to the world of espionage. Could this game give us our next big VR adventure, or would it be the “View to a Kill” of the franchise?

Just like we saw in the first game, I Expect You To Die 2 opens with a James Bond-esque opener, this time by singer/songwriter Puddles Pity Party (which I’ve included below), propelling the caper from the retro-futuristic 70s camp of the original to the nuclear annihilation Cold War style of a more modern setting. While I enjoyed the Shirly Bass-alike intro of the original, this one is more thematically linked than its predecessor, and once again sets the tone for what lies ahead.

I Expect You To Die 2 | Opening Credits

It’s hard to believe that it’s been five years since Schell Games released the first game, but right out of the gate it’s clear that the team hasn’t been resting on their laurels. I Expect You To Die 2 is chock full of tiny details that raise the immersion level of an already highly tactile game. That drink cup? It makes sloshing noises when you shake it, and sipping at it makes a straw slurping noise. That broken bottle? You can stab yourself in the eye if you are inclined, though I’m not sure why you would. The rope you just pulled gives off whips of dust as it ascends into the rafters to lower the curtains. Everywhere you look are small details that truly elevate this from good to great, and that’s just a part of the equation.

I Expect You To Die 2: The Spy and the Liar casts you as a spy for “The Agency”, and your job is to uncover and thwart the latest plot from the evil Zoraxis organization. This time around they plan to take over the world (of course) with the help of an actor named John Juniper (voiced expertly by none other than Will Wheaton). Juniper, instead of being content to sit in the shadow, instead takes his evil plans to center stage. Whether it’s an elaborate stage play complete with a giant poison gas spewing mask, or a Mission Impossible-inspired masquerade party, including a wine tasting, he’s certainly not hiding.

I Expect You To Die 2 | Wil Wheaton Promo

In the first title you were issued a telekinetic implant that allowed you to manipulate objects from a distance, and that same control mechanism persists to the sequel. I Expect You To Die 2 is a seated experience, ensuring a zero-nausea engagement perfect for newcomers and veterans alike. That telekinesis is the key to all sorts of new interactive elements, such as turning on the wine taps in the party level, or retrieving some of the many collectables hidden throughout the game. I played the original on the PlayStation VR HMD, and this sequel was reviewed on the HTC Vive Cosmos, so it was nice to see all of these incredible details with far higher resolution and clarity. Every line of text is easily readable, making all those interactive elements that much more fun.

There are all sorts of callbacks to the original hidden throughout the game, including a bear with a crossbow ported straight over from the hunting lodge. You’ll also discover all sorts of goodies that have no practical purpose, but who can resist the urge to pick up a funny mustache, glasses, and top hat to wear while they thwart evil? After all, you are at the theater! In fact, there are a number of little goodies like this hidden in every level, and finding them all is half the fun. I, for one, like to take the dome off of my celebratory cupcake and wear it on my head while I guzzle Champaign straight from the bottle. Hey, I’m saving the world — don’t judge! 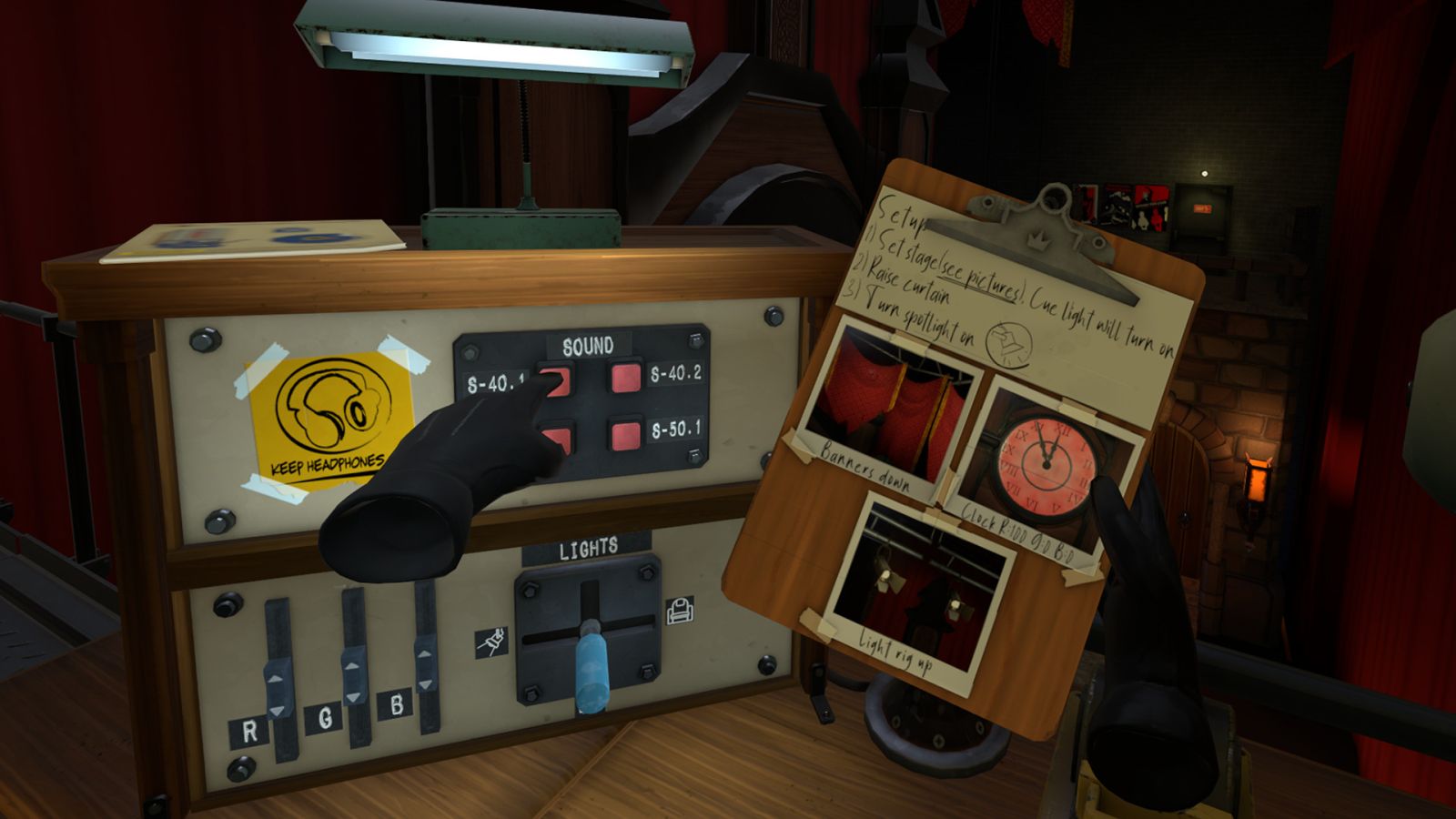 The first game was a short affair, taking roughly 2 to 3 hours to complete. This sequel is slightly longer, as my first playthrough took 4.5 hours. The puzzles are about using things in the environment slightly differently than you might otherwise think to use them, or just observing the objects around you. The first mission asks you to stop a crowd at the theater from being killed by a Mask of the Red Death prop. It’d be easy to get caught up in the moment and miss the fact that slightly behind you is a locked cabinet that might be important. Normally I’d be including videos of the first hour of the game, but when the puzzles are the mainstay of the product, I don’t want to spoil anything for you. Still, I bet you get stuck on the plane sequence…

There are achievements for completing every level, but there is a second achievement for each level for beating it in under a certain amount of time. I’ve never understood speed running puzzle games, but it’s a challenge available here. I have no idea if there’s extra content hidden behind those, though I doubt that there is — I just don’t play games like this that way. 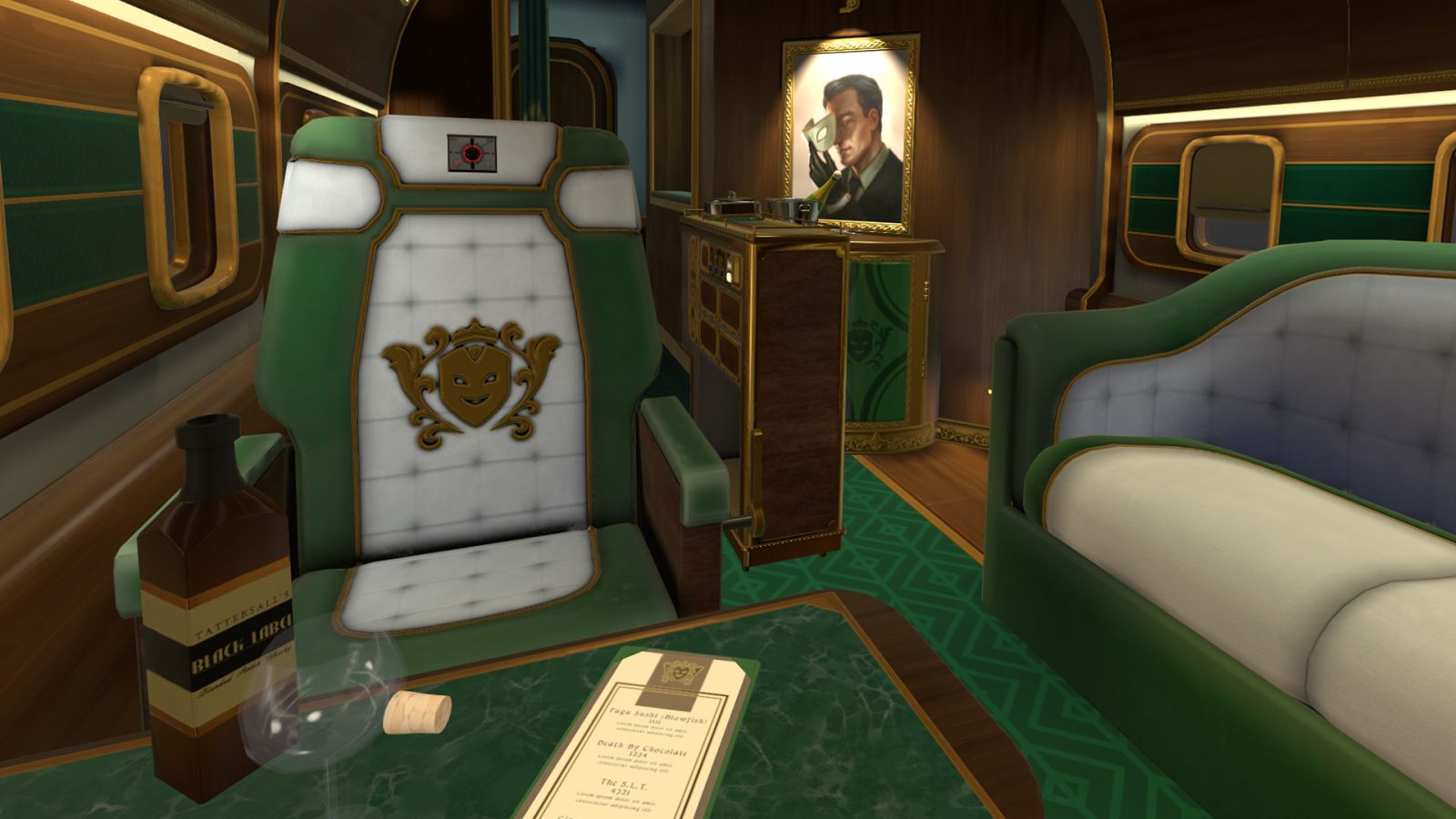 One of my favorite things about this game is the way that Schell Games has approached the trial-and-error nature of puzzle games. It’s not often that you are in any way restricted from movement, so you are free to simply get started while the Support Agent blathers on about this or that. Even near the end when the villain is monologuing you can grab a specific object and start fiddling with it, making him angry that you want to skip forward. I don’t want to spoil it as it’s funny, but it demonstrates that the team is paying attention to the fact that you might be hearing some of these things a few times.

I did run into a few hiccups. During one sequence, a crucial puzzle element fell through the desk I was working on, preventing me from completing a puzzle. Another instance caused an explosion to detonate without me touching it — I can’t explain why. I also had an instance where a key wouldn’t engage with a lock, no matter how much I jabbed at it. I eventually tried the same key on the lock out of frustration and it slid in and turned without a hitch. Thankfully these three examples are the entire list, with no stability or framerate issues to be seen.

I Expect You To Die 2: The Spy and the Liar review — Virtual Villainy and Tactile Traps

I Expect You to Die 2: The Spy and the Liar

I Expect You To Die 2’s half dozen hours is easily one of the best ways to introduce somebody to VR. It’s funny, well written, nausea free, and incredibly engaging at every turn. Regardless of which VR headset you have, this one needs to be in your library -- it’s a must have.

Ron Burke is the Editor in Chief for Gaming Trend. Currently living in Fort Worth, Texas, Ron is an old-school gamer who enjoys CRPGs, action/adventure, platformers, music games, and has recently gotten into tabletop gaming. Ron is also a fourth degree black belt, with a Master's rank in Matsumura Seito Shōrin-ryū, Moo Duk Kwan Tang Soo Do, Universal Tang Soo Do Alliance, and International Tang Soo Do Federation. He also holds ranks in several other styles in his search to be a well-rounded fighter. Ron has been married to Gaming Trend Editor, Laura Burke, for 21 years. They have three dogs - Pazuzu (Irish Terrier), Atë, and Calliope (both Australian Kelpie/Pit Bull mixes).
Related Articles: I Expect You to Die 2: The Spy and the Liar, VR
Share
Tweet
Share
Submit