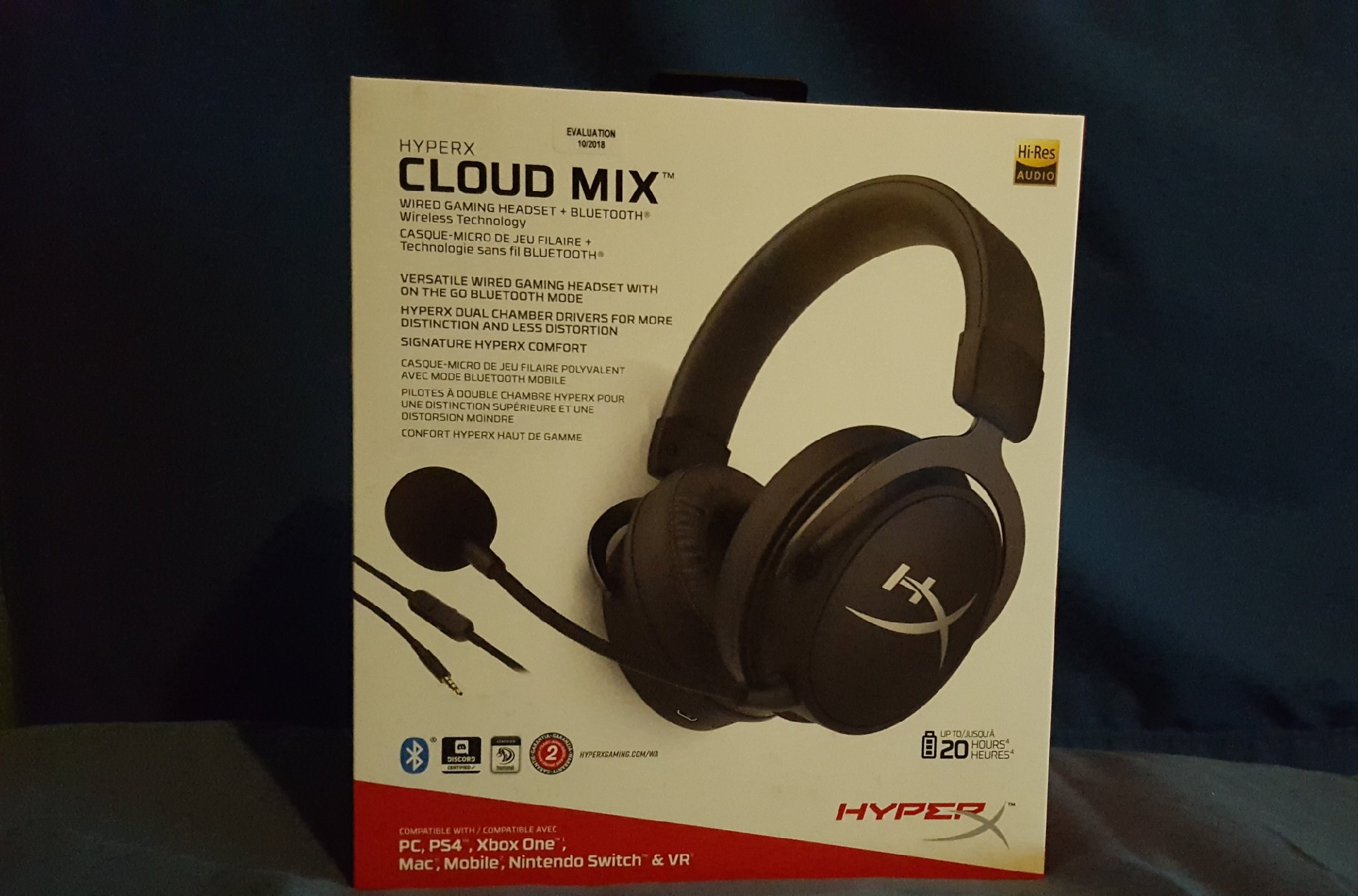 Gaming accessories come in all shapes and sizes, including headsets, pro controllers, charging docks, and more. They aren’t necessary, but they typically enhance and improve the gaming experience. Personally, headsets are my favorite type of gaming accessory, especially for online multiplayer games. Having that up-close, multi-directional surround sound can be the difference between success and defeat. With that thought in mind, HyperX is releasing the HyperX Cloud MIX headset, and I got the chance to try it out.

The HyperX Cloud MIX is HyperX’s first Bluetooth enabled gaming headset designed for gamers on the move. The headset gives you the option to either connect to your devices through Bluetooth or plug in to your devices with one of two 3.5mm plugs. If you don’t mind a 1.3m cord, then plugging in works wonderfully; if you use the PC extension cable, you’ll have 2 meters. While playing games on PS4 and PC, these cords brought crisp, clean sound without any issues.

I spent most of my time using this headset while playing Dead By Daylight. In Dead By Daylight, sound is incredibly important, so a good headset can make a huge difference. After plugging the HyperX Cloud MIX in, turning up the volume, and playing some matches, I became acutely aware of my surroundings. I could more clearly hear the heavy breathing or whimpering of nearby survivors, making it easier to find out where they were hiding. This led to me more successfully discovering and hunting down the other players. The Dual Chamber Technology and 40mm drivers are clearly doing their work when they let me hear a survivor hopping out of a window behind me, prompting me to immediately turn and chase them. The point is, the sound quality and directional cues are amazing and incredibly helpful.

The Bluetooth function is pretty great as well, although I used it with my tablet. Holding down the power button for a few seconds turns the headset on or off, with an audio cue letting you know it turned on or off. In order to connect the headset, hold down the power button for five seconds until the LED indicator starts blinking red and blue; once activated, go to the Bluetooth enabled device and click on the HyperX option in order to link them up. Both the headset and device should indicate that they are connected and then you’re good to go. As with the wired mode, the sound quality during a wireless connection is crisp and clear. Youtube videos are a treat to watch in what HyperX is calling “lifestyle ready” mode. With no cords or plugs in the way, you’re free to move or lounge around as you please without worrying about yanking on the cord. Nothing hurts more during a video or gaming session than when you accidentally suddenly yank on the headset cord, jerking your head and hurting your ears a bit. When using Bluetooth, the headset can last for around 20 hours or so before needing to be charged. The headset comes with a USB charging cable at least, but it’s only 0.5mm, which prevents use while charging. It’s not a big deal, but it’s still important to know. And, if you need to walk around a bit while wearing the headset, you have up to 10 meters before losing a connection.

There are also two types of microphones to use depending on what you’re doing. You are given a detachable boom microphone that can be plugged into the headset during use, and then disconnected for when you’re ready to store it away. This microphone is an electret condenser and focuses on noise cancelling, which makes it perfect for gaming chats, TeamSpeak, or Discord. The other microphone is a built-in electret condenser that is omni-directional. This is designed for ease of use during phone calls, mobile gaming, and more. So no matter what you’re doing while talking, the HyperX Cloud MIX has you covered.

Now, in addition to function, comfort is just as important when purchasing a headset. The HyperX Cloud MIX is made of a durable aluminum frame and cushioned ear-cups. The headset feels a little small at first, almost seeming like it won’t cover your ears completely. I quickly realized I could pull them down a bit more to completely cover my ears and lock in the sound. It takes some getting used to, but I’ve found that it’s actually pretty comfortable. The cushions prevent your ears from feeling like they’re getting pressure put on them, although they feel a bit snug. After playing for a few hours, my ears did look a little red, but that usually happens when I use headsets for extended periods of time.

Cost is obviously important to consider as well, and the HyperX Cloud MIX will be exclusively available in the U.S. at Best Buy for $199.99. With a two-year warranty, you’ll be covered in case something unfortunate happens and you need to fix or replace your headset. For gamers willing to shell out a good chunk of cash for a high quality gaming headset, the HyperX Cloud MIX might be perfect for you.

The HyperX Cloud MIX is a great headset designed for gaming, listening to music, phone calls, and more. With a detachable microphone or the built-in microphone, you have several options to talk to your friends. Plugging in or connecting to Bluetooth both provide crisp, clear, clean sound. The headset is cushioned and comfortable, although it can feel a little too snug at times.

Codi loves to play video games and watch movies. He will watch almost any kind of movie just to experience them. His ideas take inspiration from the shows and movies he watches, and games he plays. He also loves a good pun.
Related Articles: HyperX Cloud MIX
Share
Tweet
Share
Submit