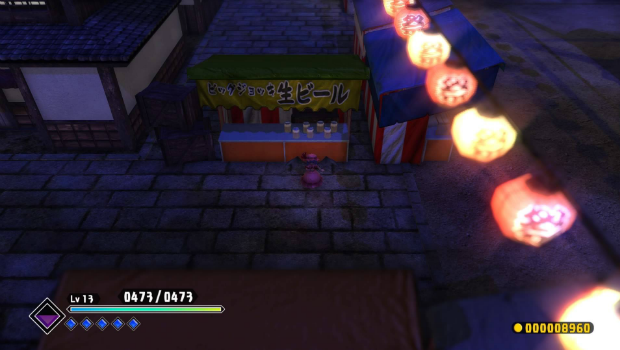 Video game evil, when perpetrated by the player themselves, has two faces. The first is psychotic, with the destruction of planets, murder of innocents, and ceaseless Goomba stomping.  The second is a sort of “Scarlet Curiosity”, where the protagonist is overpowering, unstoppable, and completely over it. Murder, violence, and savagery are so gauche; these disillusioned demons aren’t out for bloodlust as much as they are just passing through on the way to potential fun and adventure.

I’ve played a lot of games that wanted to provide me nostalgia, only to be infinitely bored and wanting more. Like Remilia, the little vampiric scamp in Touhou: Scarlet Curiosity, I’m always seeking for some great new adventure. With an incredibly beautiful graphic design, seamless movement between 2D and 3D platforming, Touhou: Scarlet Curiosity is that game I’ve been seeking, as well as the diamond in the rough of 2016.

In Touhou: Scarlet Curiosity, the protagonist, Remilia, is bored with life and her incredible power, and seeks out some powerful monster that is rumored to have been summoned by Remilia in a series of newspaper articles. She takes to the wilderness in search of information, the writers of the articles, and the monster itself, all the while leaving a trail of mangled fairy bodies and dead wolves in her wake.

In addition to Remilia, there is a secondary storyline you can play through as her servant girl, Sakuya, with the same levels but a different story. Sakuya is very adept at combos and feels sturdier than Remilia, whereas Remilia is very quick, glides instead of walks, and has much more finesse.

Touhou is a very smooth platformer at heart, but the game does a magnificent job of blending several game styles into one nice package. Rather than one single experience, the game transitions from 2D to 3D, a platformer to a top-down shooter, and quick and linear to a dungeon delving adventure with ease. Far more difficult to explain than enjoy, this transition keeps the game fresh, and this means you can easily lose hours playing.

The 2D platforming portions feel an awful lot like Sonic the Hedgehog, minus the pinball elements.  This is much more emphasized in Remelia’s storyline but present throughout the game, with the same sort of physics, and movements from those classic games. This provides a very fast paced platforming experience with more emphasis on speed as opposed to complex jumps or gaps.

It is the 3D experience that is much more prevalent, however. Top-down, you control the character as you move across the map. This mode feels very similar to a space shooter, just with different sprites. The enemies, mostly fairies, attack using laser-beam and gun style spells, in addition to melee techniques, you move about avoiding and attacking. This is very basic, not flashy or new in any way, but it works flawlessly.

My favorite part of these controls  are upward movements. I came to a ledge in the game that typically means the edge of the map;  I searched for a few minutes to find somewhere I could go to, and then finally tried to jump up on the ledge. For any desperately lost gamer, that feeling of jumping into an invisible wall in faint hope is familiar, but in Touhou: Scarlet Curiosity, I did just that and it worked.  Minor, but pretty cool.

All in all, I can’t say I have a single complaint about the gameplay of Touhou: Scarlet Curiosity. Each transition is smooth and works great, all of the battle mechanics are fully functional and the attacks are all effective in their own ways. The game gives you a customizable set of attacks and challenges you to change your “build” for certain bosses and challenges. These are earned through levelling your character, and also through equipment found. The RPG elements here are crucial to building up your character but are quick, efficient, and non-intrusive.

If I had to say anything negative gameplay wise, I would only suggest that the game is a bit on the easy side. Seasoned gamers aren’t going to have much trouble getting through the game. That said, the difficulty is secondary to the experience itself, and while the standard enemies aren’t ever a real threat, boss battles are still tough experiences to beat.

The art style of Touhou: Scarlet Curiosity is, in a word, fan-diddly-ding-dang-dong-tastic. The backgrounds and in-world elements are all beautiful drawn with rich, vibrant color that fits equally in a museum painting as it does in this game. The depth of view, lighting, and the game’s use of elevation all combine to bring the world wonderfully to life. Each new stage and map brought another wonderful look and feel experience, adding greatly to overall enjoyment.

The game doesn’t skimp on good music either, though it is constant, and makes up 95% of the sound of the game. This is area where this game falls short the most. There are no voice actors, and there are actually surprisingly few sound effects overall. It is certainly not an empty world, but there is a certain expectation that the quality of the art sets that isn’t matched on this end.

Lastly, the game boasts a pretty nice story in terms of writing, with good dialogue and a plot that builds and turns as you proceed through it. A lack of voice acting can take away from the story some, but overall we’ve got a solid narrative to accompany this excellent game.

Touhou: Scarlet Curiosity is a magnificent game that has taken me completely by surprise with its quality. A mix of 2D and 3D platforming, RPG, and adventure gaming blends with a gorgeous art style to form this hidden gem just waiting to be uncovered. All the while familiar and unique, Touhou: Scarlet Curiosity is a game that all should give a chance, enjoyable by the most hardened veteran gamer down the most green of newcomers.

Patrick Rost has been with Gaming Trend since 2013. At first focused on sports coverage, Patrick has gone on to cover a wide range of games and other products for the website. Outside of Gaming Trend, Patrick writes and records music, grinds perpetually in Elder Scrolls Online (PS4), and lives day to day with his two dogs, Bob and Stella.
Related Articles: Touhou: Scarlet Curiosity
Share
Tweet
Share
Submit