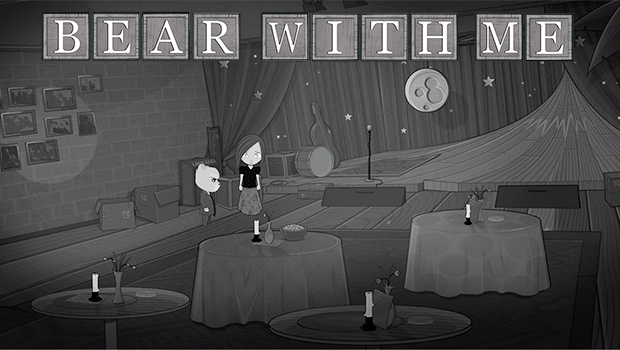 Paper City and its seedy underbelly are ready to be explored in Bear With Me Episode 2. Amber and Ted take to the gritty, monochromatic streets as they continue their search for Flint, Amber’s missing brother, and investigate the most recent fire by the mysterious arsonist, the Red Man in this noir point-and-click puzzle game. Picking up where Episode 1 ended, the newest chapter builds off the decisions which you, the player, made in the previous chapter, and leads our reluctant duo into a tangled web of lies, deception and hidden motivations.

This time around, you are no longer restricted to the interior of Amber’s house, and will have to explore multiple locations within the city… once you figure out how to lower a raised terminal bridge, at least. The narrative of  Episode 2 is both darker and funnier than the first part, and the training wheels are definitely off. The puzzles inside of Paper City are challenging, requiring observation, reasoning and creative use of resources. This time around, hints as to how to progress are few and far between, requiring you to pay close attention to conversations and to apply the lessons you learned in Episode 1 to new challenges if you want to get any closer to finding Flint.

Bouncer gorillas wearing “Play with me” Tshirts? Totally normal for Bear With Me.

While this installment is roughly the same length as the first, offering two to five hours of gameplay, Episode 2 feels both bigger and longer, likely because this episode provides a great deal more variety in both location and characters. The plush toys and imaginary characters which have come to life in Paper City are unique, colorful (at least, as colorful as can be expected in a monochromatic game), and often given delightfully witty or punny names and descriptions. I was eager to click on and get to know each and every one of these interesting personalities. The dialogue is witty, fast-paced, and filled with even more of the banter, cutting one-liners, introspective commentary, and fourth-wall-breaking remarks we’ve come to expect from Bear With Me. My favorite quip in the game, “Nothing says I’m sorry like a funeral wreath,” has already become part of my personal lexicon. This episode is, once again, overflowing with pop culture references, and delightful easter eggs referencing Blade Runner, X-Files, Star Wars, and Shaft, just to name a few, are scattered throughout both settings and dialogue.

This humor provides a much needed balance to the darker tone of Episode 2, which strays a bit more towards the darker end of the fifty–I mean–many shades gray. While we may be inside a city made of paper and filled with imaginary friends, now that we’ve left Amber’s house, things have gotten real. Paper City is in turmoil, an arsonist is on the loose, Ted’s best informant is convinced that he is being spied on by seagulls, and all is not right with Amber and Ted’s relationship. Tensions rise as the pair argue over the best way to proceed with their investigation, how to handle certain leads, and just how much risk is worth undertaking. Here, at long last, the diverging plot emerges, and actions which you took in Episode 1 have an impact on both conversations and the overall plot.

Welcome to Paper City, hope you survive your stay.

Still at the heart of this investigation is the mysterious and terrifying Red Man. This chapter provides a few more hints as to what his role within this story may be, and these only deepen the intrigue. This arsonist and could-be murderer is still largely a mystery, as is the reason that we, the player, are able to control the actions of the Red Man. Episode 2 may ask more questions than it answers, but you can feel the narrative starting to come together, and it’s all too easy to start crafting your own theories.

Episode 2 seems to load noticeably faster than Episode 1, which is a very welcome upgrade, and the pace of the story has definitely picked up. The overarching narrative is engrossing, and made all the more memorable thanks to a unique cast of character and punchy humor. The entire episode is well paced and very rewarding. Having gotten a taste of Paper City, and a better understanding of the dangers our heroes face, I’m even more eager to see how the story unfolds in Episode 3.

Bear With Me Episode 2

Bear With Me Episode 2 takes everything great about Episode 1 and improves upon it. Amber, Ted, and their straining relationship hit the streets of Paper City, diving deeper into the tangled web of deceptions and hidden motivations surrounding Flint's disappearance and the mysterious Red Man. With two to five hours of gameplay, more places to explore, a diverse and interesting cast of characters, a strong infusion of humor, and a diverging story which encourages replays, this point-and-click noir puzzle game brings a lot of enjoyment to bear.

Best known online as damphyr, Kay Purcell is a purple haired popular culture expert and San Diego Comic-Con panelist who spent fifteen years as as a Senior Community Manager and Brand Writer for DeviantArt. An avid shiny Pokemon hunter, she has a habit of nerding out over video games, cats, VR, and geek culture.
Related Articles: Bear With Me Episode 2
Share
Tweet
Share
Submit