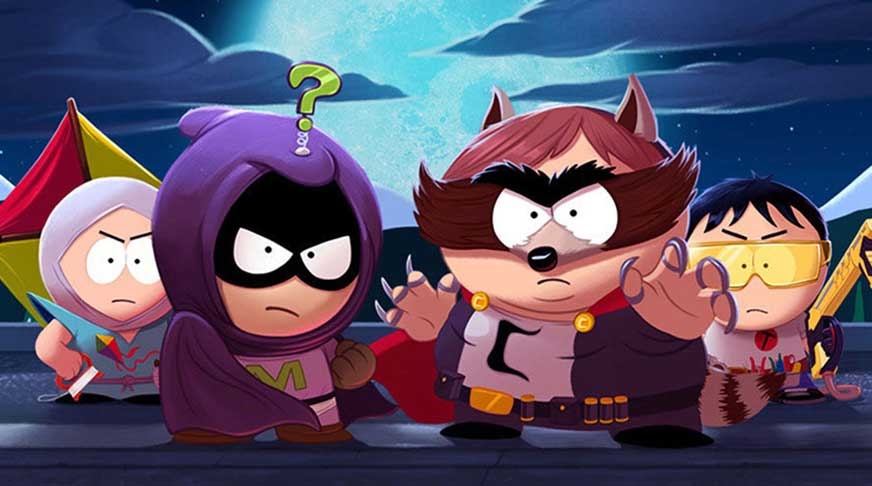 I know I’m late getting into the South Park games, I’ve always wanted to play them, but I tend to avoid playing RPGs when they tether me to a TV or PC. Imagine my delight when Ubisoft announced that South Park: The Fractured but Whole was making its way to the Nintendo Switch. While I knew basically what to expect, an interactive episode of South Park, some turn based combat, and a crafting system, I was absolutely unprepared for how good the entire thing was going to be.

The Fractured but Whole opens with Cartman doing what he does best: derailing whatever the boys are up to. In one fell swoop, he disbands the Lord of the Rings-style epic battle, which was set up in the Stick of Truth, and convinces everyone to abandon that game and go play super heroes instead. Cartman, having donned his crusader persona of The Coon, calls all his friends to his lair so they can begin the search for the missing cat Scrambles, and his sweeeeeeeet $100 reward. This is incredibly important, as with that much cash, Coon and Friends will finally have the resources to become more popular than those dirty, treacherous Freedom Pals.

Of course, Cartman rules his superhero franchise with an iron fist, and you’ll need both his approval and a backstory before you can join the team. Once you pick your class, you’ll receive a perfectly Cartman-esque custom, DC-style history for your character, rife with danger, pain, and betrayal. If you’re not terribly fond of the powers granted to your superhero, who is generally referred to as Buttlord, you can always go back and talk to Cartma–I mean, the Coon, to try out another set of powers. …At least until he gets tired of re-writing your history, at which point you’ll be stuck with your final choice until you’ve completed your character card.

Filling out your character card is as insane, entertaining, and as offensive as the show itself. Mr. Mackey tries to talk to you about gender, and has something of a mental meltdown if you identify as anything other than cis. He gets it so wrong, in fact, that you’ll have to go back a few more times in order to learn more and more about gender, sex, and sexuality. As a side note, I took way too much delight in watching him try to wrap his head around whatever out-there options I could give him. While PC Principal is supposed to help you fill out the race section of your character card, he needs to be convinced that you’re capable of understanding such a sensitive topic, and will require you to identify five microaggressions, and subsequently punch all five aggressors, before he’s willing to talk about ethnicity.

Your character card may be important, but it plays second fiddle to the overarching task of finding the missing cat and collecting that sweet, sweet reward. This is an epic quest which will have you exploring the seedy underbelly of South Park, fighting strippers, arresting drug lords, going toe-to-toe with the Italian mafia, freeing the Human Kite from the spell of the Raisins girls, crafting Mexican food with Morgan Freeman, lap dancing to get information, and avoiding the hot lava (red legos) which threaten to take over this quiet mountain town. Showdowns with the treacherous Freedom Pals, and the mysterious, non-union, social media savvy super hero known as Call Girl are inevitable, and the antics are even more ridiculous and entertaining than you’d expect.

If there’s one drawback to playing South Park: The Fractured but Whole on the Switch, it’s the load times. While everything plays smoothly, the Switch just doesn’t have the horsepower of other consoles, which causes loading screens to become a real drag. More than once, I moved to a new part of the map, waited long enough that I checked my email on my phone, then realized, once it finally loaded, that I’d gone the wrong way and had to turn right back around and face that loading screen all over again.

On the plus side, the move to Switch allowed for more responsive joy-con thumbstick controls for the poop dance mini game, rather than the cumbersome arrow keys of the PC release. Unfortunately, the previously mentioned load times only make exploring South Park even more of a slog. Even after all the Fast Pass (quick travel) stops were activated, I’d find myself sighing at the idea of having to trek to the other side of town, and this did nothing to motivate me to peek behind every single door.

While the Switch may be a little on the slow side, it’s a reasonable price to pay for its greatest feature: portability. As mentioned at the start of this article, I hate being tethered to a TV or a monitor in order to play games, it’s just a personal preference, and I can’t rave enough about how great it is to have access to this game on the go. If I find myself stuck in a long line, that’s plenty of time to fartkour (yes, you read that right, that’s parkouring with farts) up to a hidden item. Super tired but really want to finish that fight? Beat up some angry rednecks from the comfort of your own bed. Playing in public should always be done at your own risk, since you never know what quip will make you burst out laughing, and you might not want to have to explain to a random, offended stranger why Cartman just announced “Another victim claimed by Diabetes.”

Combat is turn based and tactical; simple to grasp with lots of room for clever thinking and creative maneuvering. Each character has their own class and set of moves, and learning who can best handle what kind of map or enemies is important… except for where Super Craig is concerned. Maybe it’s my personal bias, as Craig is my favorite South Park character, but his biting sarcasm and utter lack of enthusiasm for literally everything meant that he simply had to be on my team at all times. Your mileage may vary. Combat is more than just issuing commands and putting your feet up; different moves provide additional damage if you power them up by pressing the A button at the right time, and you can even regain a tiny bit of health if you time your button presses when an enemy attacks.

Characters shout out their catch phrases, riff on each other, trash talk enemies and allies alike, and occasionally have to shout “Car!” and clear the way for an oncoming vehicle. You’ll even manage to harness the power of your farts to bend time itself, allowing you to wreak unique havoc on your enemies, depending on just how you squeeze the big one out. The Fractured but Whole has struck a magnificent balance in creating a challenging battle system, filled with strategy and complexity, while still hitting all of the irreverent, outrageous, and hilarious beats which South Park fans expect.

The overarching story is on par with any of South Park’s best episodes. It’s ridiculous, it makes no sense, and I couldn’t wait to see what happened next. It’s also worth pointing out that, like most of South Park’s best episodes, this game can be incredibly offensive in the most satirical of ways. It takes aim at everything, pulls no punches, attacks both sides of every coin, and should be avoided by anyone who finds no humor in farts, dislikes cursing, or has ever been described as ‘overly sensitive.’ For everyone else: hold onto your butts, South Park: The Fractured but Whole is a hilarious, raunchy ride that now be played on the go.

South Park: The Fractured but Whole

South Park: The Fractured but Whole captures the very best of South Park. The creators have woven irreverent and offensive humor seamlessly into an outrageous and entertaining RPG adventure. By making the leap to the Switch, the Coon and Friends can now be played on the go, but at the cost of slower load times. Even so, this is a raunchy superhero epic no fan should miss.