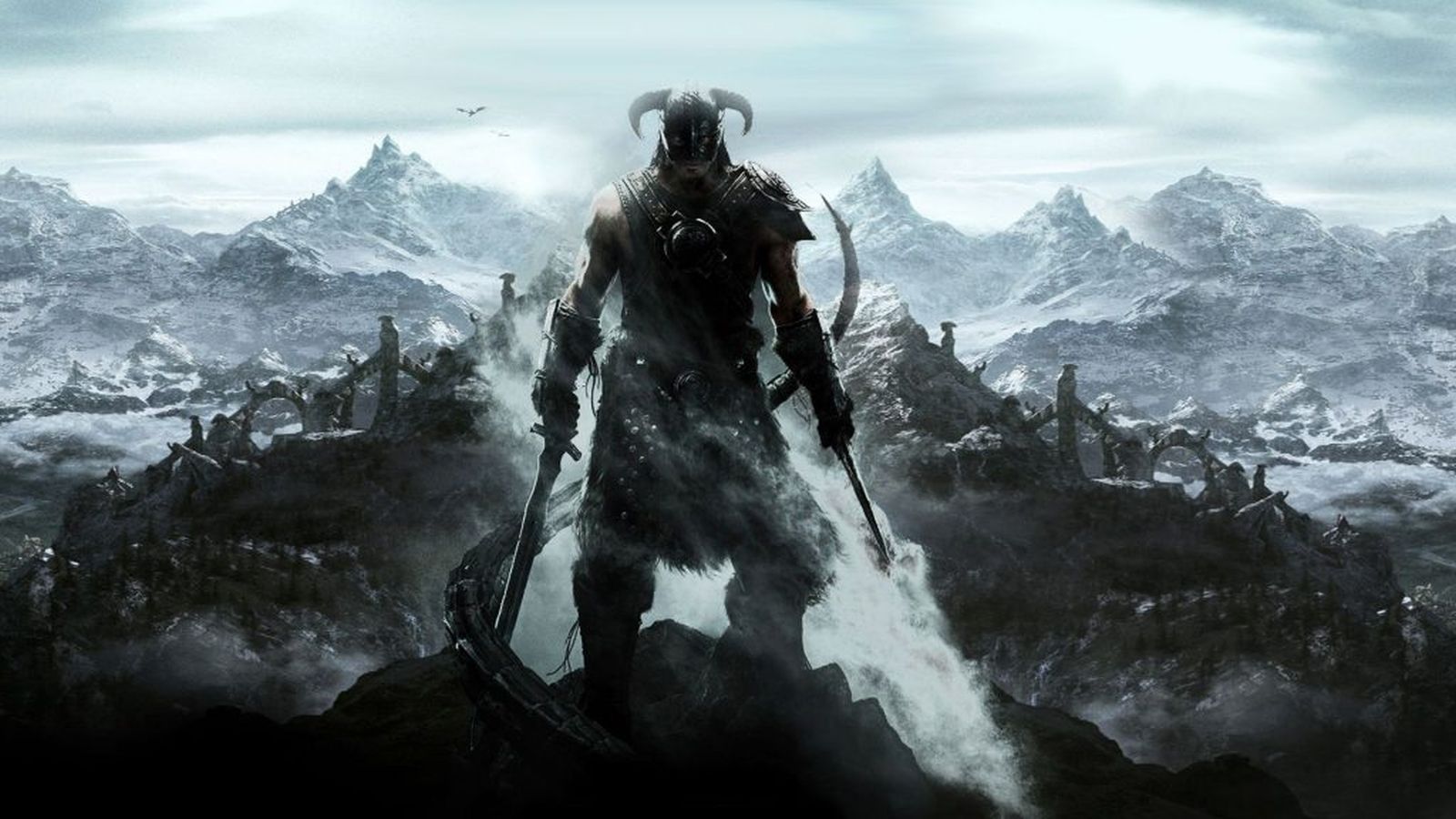 As I mentioned in my review for the Nintendo Switch version of The Elder Scrolls V: Skyrim, I’ve put hundreds of hours into the game. As my rickety cart rolls through the intro for the second time in under a week, you can imagine my surprise when I saw things I’d never seen in all of my playthroughs of the game. Did you know that there is a Word Wall (the curved walls that grant portions of the great shouts in the game) adjacent to where your beheading is set to occur? Similarly, did you actually see the Dunmer elves that the cart driver mentioned as he rounds the corner? While Skyrim in VR is still going to contain any of the wonk present in the original game, I’m happy to report that this is the AAA experienced we’ve all been waiting for. This is Skyrim as we’ve never experienced it before.

If there’s something that VR does exceedingly well, it’s scale. Seeing the massive Dragonsreach stronghold arch above my head as Jarl “paint me like one of your French girls” Balgruuf reclines in his highly relaxed pose in his throne before me is a sight to see. Similarly, Breezehome, the first house available in the game, had always felt small and cramped to me. In VR, the house becomes a home, large and lavish. These early moments are, naturally, stomped flat the first time you engage with a dragon. It’s a fight you’ll never forget, and one you’ll look forward to more than you do on a flat screen experience.

Graphically, Skyrim VR appears to use a mixture of the original release, and the Special Edition of the game (though graphically closer to the Xbox 360 / PlayStation 3 release back on 11-11-11 – here’s my review at that time), with some concessions to ensure a stable framerate. In short, Skyrim is beginning to show its age. This is exacerbated by the fact that you can and will get far closer to the textured surfaces of the game in VR than you would otherwise. Even in the intro I found myself leaning towards the cart bench to inspect the textures, simply because I could.

To run in a VR world and not nauseate users, you have to maintain a ridiculously high framerate. In fact, to launch on the PlayStation VR, you have to either hit 60fps re-projected to 120fps, 90fps native, or 120fps native to be certified. As such, it appears that Skyrim’s visuals have been dropped to what might be medium settings on the original release to hit that lowest benchmark. This makes for some chunky texture work, gnarly and angular faces, and near-constant pop-in at the horizon. That said, the moment you get a weapon in your hand, you’ll forget all about the graphics on display.

There are a few control schemes available in Skyrim VR. At its most basic, you can play the game using the DualShock 4. The defaults uses natural motion (you press forward, you move forward) and snap turns (you press right on the right thumbstick and you’ll snap to the right about 30 degrees). As you press forward, the game will close the sight aperture, encircling the edges with a black ring like we’ve seen in other VR games. Moving faster makes that ring bigger, which gives those with nausea something “stationary” to focus on. If nausea isn’t a problem for you, there are a variety of toggles to adjust all of this to your particular comfort level. The DualShock is likely the least fun way to experience Skyrim VR, however, so let’s talk about the PlayStation Move.

Spiders are horrific in VR. Killing them is a real pleasure.

Using two PlayStation Move controllers, Skyrim takes on an entirely new feeling. Sure, the game wasn’t designed to function as a VR title, and there are more than enough little annoyances that remind you of this frequently, but none of that stops it from being an absolute blast to play.

At default settings, you’ll use the Move button (the big one) on the left stick to walk, using the X and O button on the right stick to snap left and right a few degrees. This, combined with moving the left stick to the left, right, forward, or backward, you can control your motion in more of a strafing pattern. Using the aforementioned “narrowing” of vision to reduce nausea, this allows players to move around the world in a natural motion (Bethesda refers to this as “Direct Movement”). If you can’t handle this movement mechanism, the game also supports the more tried-and-true teleportation method. As a long-time nausea sufferer, I found that I could play for about 45 minutes to an hour before being forced to have a seat, switching to the Dualshock, or bailing out of VR entirely. Adjusting to the tightest vision aperture allowed me to play as long as I would like, provided I didn’t do a lot of going up and down stairs repeatedly. I was also able to alternate between standing and seated positions by simply recentering. It’s actually quite comfortable once you get used to the button placement.

Bethesda has provided a great deal of granular control over player experiences in Skyrim VR, and a lot of this comes in the form of how snap turning is implemented. In practice, there’s simply nothing as visceral as the direct control mechanism, and even while having to use it in shorter increments than my usual Skyrim stints, this 1:1 control scheme made combat different enough to feel fresh. All of us that have played Skyrim find ourselves falling into the trap of being some sort of stealth assassin archer, but here the control scheme made me fall in love with a longsword / fire combination all over again.

On the off chance that this is your first brush with Skyrim, let me explain why this game is $60 at launch. Whereas other VR titles have come in more value-priced, the answer is, in truth, rather simple. Most VR games have popped in with, at most, half a dozen gameplay hours to offer. Star Trek: Bridge Crew gave us more to play with, handing in about a dozen hours of cooperative play, but it’s been a pretty sparse field thus far. Skyrim, on the other hand has an average time to complete clocked by the folks at How Long To Beat at 121 hours on average. Lazy completionists have clocked over 1320 hours to nail down all of the non-repeating content. To say that this one VR title could consume every gaming minute of your life for years to come isn’t hyperbole as you could conceivably play this game eight hours of every day for nearly a year. If we are talking pure value for your dollar, you simply cannot do better.

If there’s one aspect of Skyrim VR that I particularly disliked it’d have to be the selection mechanism. Used in menus, as well as conversation trees, you often interact with a long list of objects. Whether it’s swapping out armor and weapons, or selecting spells or conversation options, swiping the Move controller up and down is a clunky experience at best. You get used to it over time, but it’s never comfortable. Worse still, without mods, it won’t get any better.

You read that correctly: even though the flat screen Special Edition on PlayStation 4 supports mods, Skyrim VR does not. Despite the inclusion of all three expansions (Hearthfire, Dawnguard, and Dragonborn), access to Bethesda’s Creation Club is not integrated into Skyrim VR. This decision is likely to ensure a stable framerate for a smooth VR experience, as even things like turning off weight limits or granting additional skills still take additional memory.

Using sword and magic is far more fun than being a sneak-thief in VR.

Speaking of memory, I think this game is using every drop of it on my PlayStation 4 Pro, and still wanting a bit more. Throughout the game, I’ve experienced a great deal of stuttering with the in-game music. Sometimes it’s triggered by an autosave going on in the background, and sometimes it just happens while wandering the overworld. Perhaps it’s a bug (Skyrim is practically known for them at this point), but it may be a resource issue. Time will tell.

As we close out this review, I do have to disclose that there are some absolutely hilarious, but absolutely normal for VR moments in Skyrim. Swimming in Skyrim is supposed to be accomplished by doing some sort of overhand stroke motion, but doggie paddling with the Move controllers is more effective. Similarly, swinging your Greatsword like a hero makes you feel like a badass, but waggling it like a Wii-mote works just as well, and sometimes better. This is just as true for games like Gorn on the Vive as it is here, so if you were expecting the already-wonky combat of Skyrim to magically transform when VR is laid on top, you will be sorely disappointed. It’s much more fun to never take it seriously and instead lay into the simple combat with whatever feels natural, regardless of how silly it might seem. This brings me to something Skyrim VR does that NO other version can.

Not Pictured: All the pop-in that happens just before this picture was taken.

My wife is a casual gamer. She plays music titles, ARPGs like Diablo, and similar games. Not only has VR made Skyrim immediately accessible, she’s actually doing as well, if not better, than I am at dispatching enemies and navigating the world. She took to this virtual version of Skyrim in a way that I never expected. Simply put, moving the action to something as tactile as the PlayStation Move controllers has enabled it for an entirely new audience.

With hundreds of hours of content, this is the AAA title we’ve all been waiting for. While the controls can be occasionally clunky, Bethesda has delivered one of their best games, but in a whole new way. It won’t likely replace your modded-to-death PC version, but there’s something downright visceral about stepping into the boots of the Dragonborn in VR.

Ron Burke is the Editor in Chief for Gaming Trend. Currently living in Fort Worth, Texas, Ron is an old-school gamer who enjoys CRPGs, action/adventure, platformers, music games, and has recently gotten into tabletop gaming. Ron is also a fourth degree black belt, with a Master's rank in Matsumura Seito Shōrin-ryū, Moo Duk Kwan Tang Soo Do, Universal Tang Soo Do Alliance, and International Tang Soo Do Federation. He also holds ranks in several other styles in his search to be a well-rounded fighter. Ron has been married to Gaming Trend Editor, Laura Burke, for 21 years. They have three dogs - Pazuzu (Irish Terrier), Atë, and Calliope (both Australian Kelpie/Pit Bull mixes).
Related Articles: Let's Play, Skryim VR, VR
Share
Tweet
Share
Submit