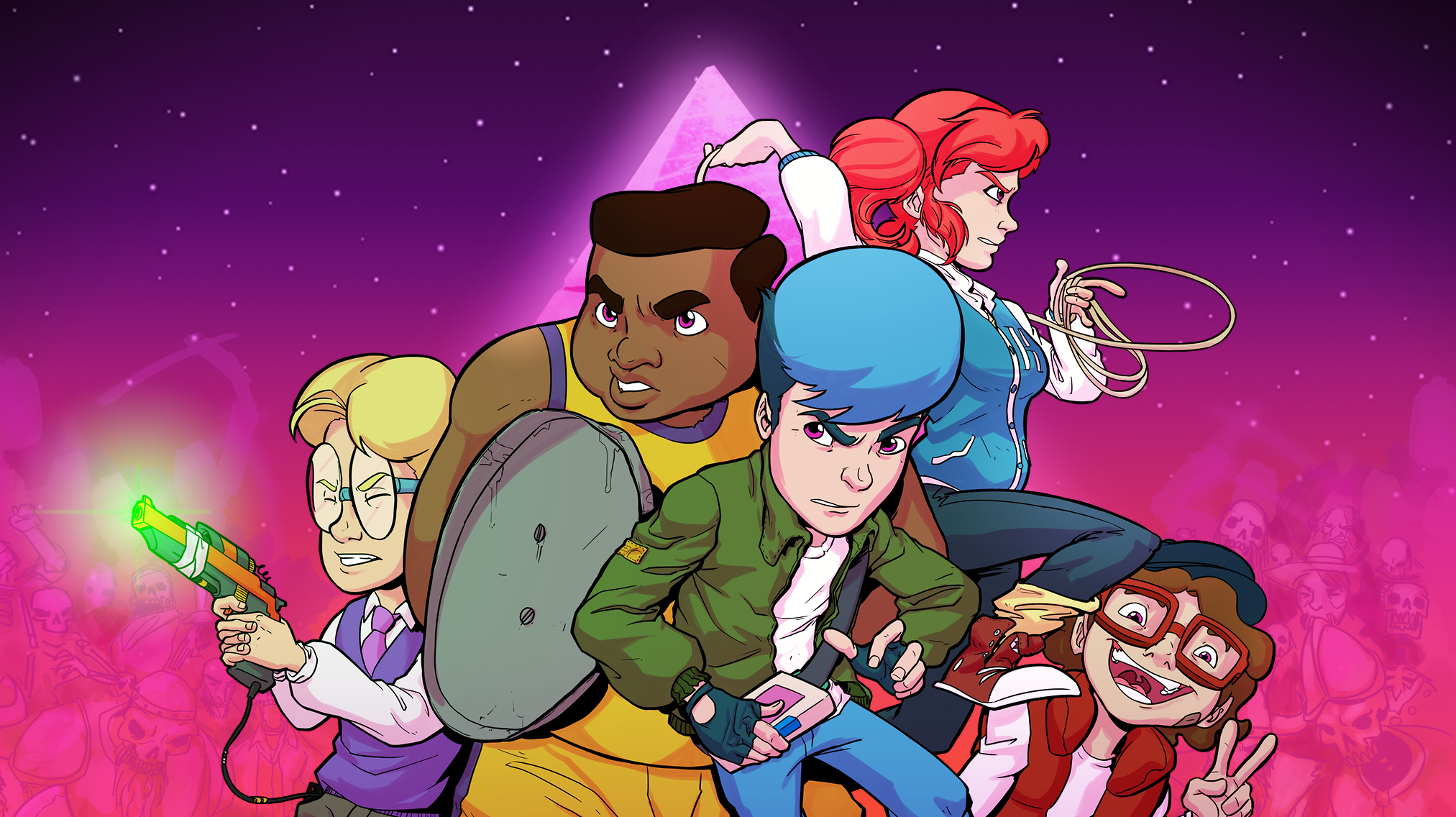 80’s classics had a feel all their own, a unique combination of hopeful innocence, surprisingly dark plots, loveable characters, and a relatable story which escalates to unbelievable heights. Recapturing that feeling is no small challenge, and neither is creating an entirely new adventure while still leaning heavily on references to the old, yet Crossing Souls manages to do all of this and more. This nostalgic pixel art indie by Fourattic tells an action packed, surprisingly touching story of five friends which will have you laughing, tearing up, exploring, and testing your reaction speeds.

The story begins as most 80’s classics do, with the dawning of summer break. Chris’s lazy summer is interrupted when his younger brother discovers the Durat, a strange, glowing stone in the woods, which launches these five friends into the adventure that will forever change their lives. Throughout this adventure, you’ll be collecting VHS tapes such as Busters of Ghosts, avoiding Quincy Queen, the schoolyard bully who looks eerily like Prince during his Purple Rain days, and even traveling back in time in a supercharged Delorean with the help of a shaggy sheepdog. The game’s villain was a striking mix of Darth Vader and M. Bison from Street Fighter, complete with a March of the Empire-esque theme song. It’s a brilliantly woven tapestry of something new combined with something old, creating a delightful experience which instantly transported me back to my childhood.

While the early game is all sunshine and nostalgia, it’s hard to talk in any depth about what happens after Chris and his friends find the Durat without spoiling things, as there are some major events which happen pretty early on. Things escalate quickly after they find a strange glowing stone which allows them to step into a realm of the dead. You’ll join them on an adventure as they avoid a corrupt general hell bent on recovering the Durat, jump between the two realms, chatting up ghosts, hermits, and gods as they fight to save their homes and each other.

Each of the five characters has their own weapons and fighting styles, and you can cycle through them by pressing the shoulder buttons. Chris swings away with his baseball bat, Matt blasts at enemies using his ray gun, Big Joe deals massive damage with fists the size of hams, Charlie, the lone girl of the group, deals out lighting quick attacks with her whip-like jump rope, and little brother Kevin… well he just farts a lot. While this could easily devolve into a button mashing mess, Fourattic has added a stamina bar which depletes while attacking, climbing, jumping, etc. This adds a strategic element to your play, be it bashing on enemies or sprinting and jumping along an obstacle course, you have to factor in stamina, switching out characters, avoiding the urge to jump, and pacing your attacks if you want to be successful.

Each character also has their own skills, skills which the game makes full use of. Between Matt’s rocket boots, which allow him to hover and change direction mid air, Big Joe’s ability to move blocks around, and Charlie’s ability to slingshot herself great distances with her jump rope, you’re going to have to use every single team member in order to navigate the map. This also encourages you to familiarize yourself with the fighting style of each character, as enemies, both living and dead, may be lurking on the other side of any given obstacle.

The controls are responsive, and I never felt cheated while playing; whenever I died, it felt like my fault for missing a beat or not dodging an obstacle. The game also features a limited number of items, making their use quick and easy. Acquired items, such as heart-shaped lollipops which refill your life, are automatically assigned to the left, right, or up button on the directional pad, and using them is as simple as selecting the desired item with the Dpad and pressing the top (Y or triangle) button.

If I have one complaint about the game, it’s that it relies on era-appropriate save points. While they do appear frequently, they tend to be located almost exclusively at the beginning and ends of areas. Having a few more scattered at the mid point could have saved some real frustration when a misstep or two required me to start all over again. Additionally, while each character has their own health meter, measured in hearts, if one character runs out of life, it’s game over for everyone. As enemies and obstacles can briefly paralyze a character while still inflicting damage on them, and failure to pay close attention to your heart meter, or not cycling through characters quickly enough to avoid a low-health one taking damage, can result in no small number of game overs.

Crossing Souls feels right at home alongside the 80’s classics I grew up loving, and sends players on a new adventure while paying homage to the properties from which it so obviously drew inspiration. It’s challenging enough to be rewarding, tells as surprisingly poignant story, and simply glows with 80’s culture, containing beautifully animated pixel graphics, an upbeat synth soundtrack, traditionally animated and aged cutscenes, and levels and mini games which touch upon every genre of game I can recall playing back then. While you can power through the story in roughly ten hours, it’s worth taking your time to hunt collectables, such as VHS tapes, discover hidden areas and power ups, and chat up NPCs to discover character unique dialogue.

As much as the game reminded me of childhood, this isn’t exactly a game I’d recommend for children. It’s not that it’s too challenging — it’s not easy, and while I found several of the levels quite difficult, I’ve no doubt they would hardly register as a blip to Cuphead players. Despite the upbeat, synthesized music and the classic 80’s cartoon style of its cutscenes, Crossing Souls goes pretty dark pretty quickly, with its entire plot revolving around death and loss. That said, I wasn’t expecting a story as deep, touching, and poignant, and I found myself genuinely emotional at several points of the game.

Crossing Souls is a delightfully nostalgic romp, balancing original content and nods to the past. Featuring diverse gameplay levels which touch on most every aspect of 80's retro gaming, enough challenge to be rewarding, and a surprisingly touching story, this is a must have for anyone who grew up shouting "Goonies never say die!"