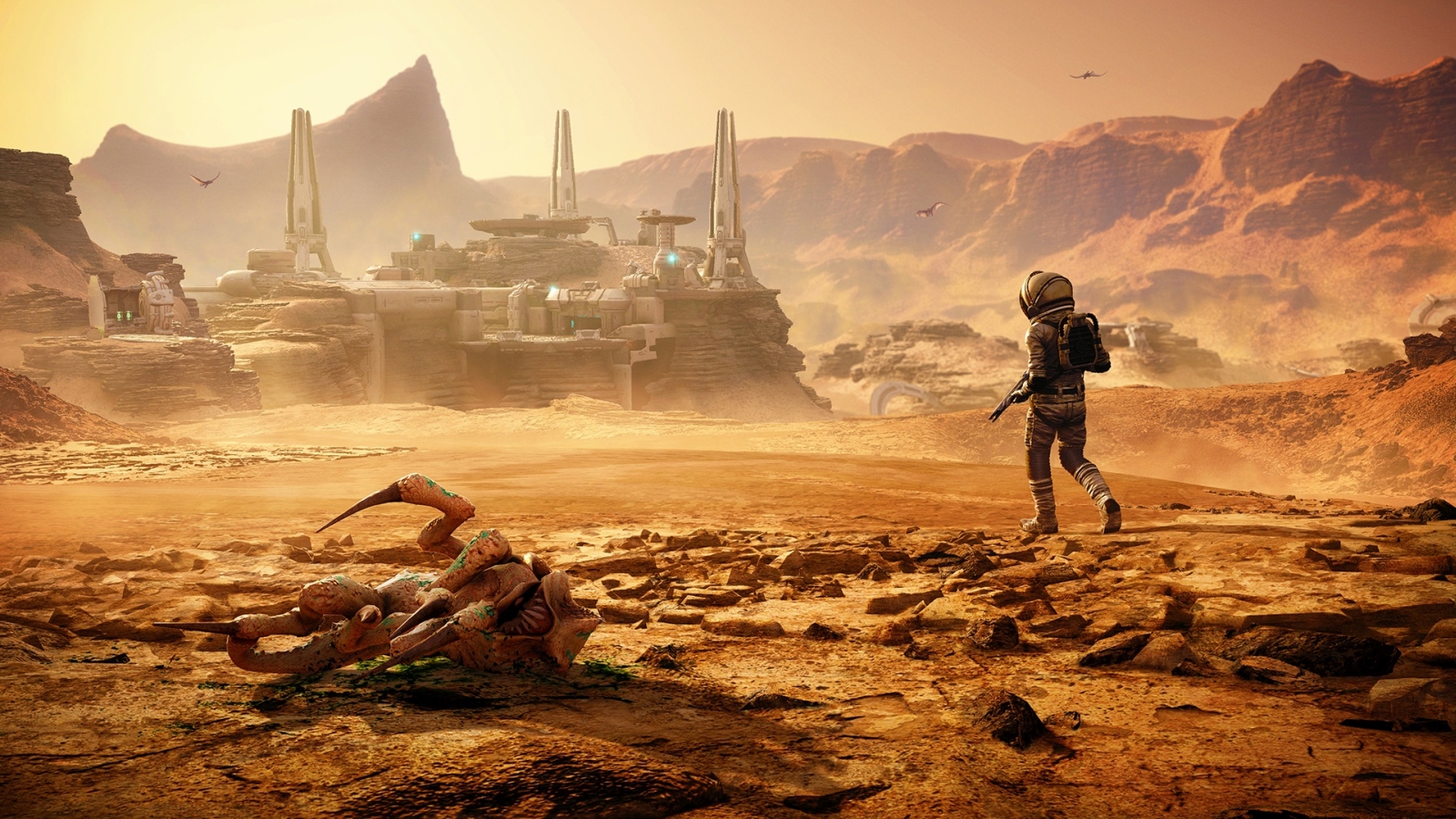 I really enjoyed Far Cry 5, and said as much in my review. One of the best parts of the game was the crazy cast of characters, with two ready standouts — “Dangerously Stupid” Hurk Drubman Jr. and crazy crop duster Nick Rye. Well, through reasons best revealed through the expertly edited video below, Hurk and Nick end up on Mars (because, of course they do) where Hurk has ended up teaming up with an AI named A.N.N.E. to fight space crabs (because, of course he is). Welcome to the Lost on Mars DLC, little buddy.

Hurk’s adventure here hasn’t gone so well, so you’ll need to recover and reassemble his dismembered body, but don’t worry — your first mission is to download his consciousness into a do rag-wearing laser-toting floating bot. You could think of him as a self-described R2D2, but with lasers. He even has one jet engine that seems to be misfiring, making him sound like a sputtering engine of a motorcycle. Why? Because yeehaw, that’s why. Oh well, at least Anne (I’m not putting the dots in every time, Hurk wouldn’t…) is nice enough to help transfer his consciousness into a “Buddybot” — your new cyborg bandanna-wearing robot for hire. With that out of the way, the real fun begins.

Welcome to Mars. Mind where you step.

Remember when you were a kid (or a super-awesome adult) and you played that “the floor is lava” game? Well, Mars is kinda like that. Every square inch of sand that you walk on attracts the arachnids (or “space crabs” as Hurk likes to call them), causing them to erupt under your feet. To battle them, you’ll use an array of 16 different weapons and about as many upgrades and consumables you’ll gain access to in your mission on Mars. Naturally, this transaction isn’t free.

You might want to get to work. Those Queens aren’t gonna kill themselves.

You might have noticed that the weapons operate a little bit differently on Mars than they do back in Montana. The 3D printed weapons use energy and overheat, forcing you to switch to another one. This means there’s no ammunition to juggle, but it does mean frequently switching between your weapon toolkit. This is likely to push the player to try the crazy weapons like the one that transforms the space crabs into chickens and cows, because, why wouldn’t you want to do that?

There are 19 terminals that require rebooting to bring Anne back online, but the Queen Arachnids have swallowed the power cores for some reason. The queens are highly armored and very resilient, but simply blasting away at them isn’t the only game in town. Collecting pheromones Hurk has cleverly named “crabmones” allows you to splash an unwilling target (including the queens) forcing the space crabs into a frenzy, attacking her instead.

If you thought you’d be without the stunt missions of Clutch Nixon just because you are jet packing around Mars, well, then buddy…you don’t know Far Cry. Naturally, you’ll find monoliths to the legendary stunt master up here on the red planet, though you’ll find the challenges are a little bit different than you might be used to. As with most things in this universe, it’s better to show than tell — enjoy.

There’s plenty to keep you busy for the roughly four hours of gameplay Lost on Mars will take you to complete. All in all, there are 19 terminals to reboot, 15 queens to kill, 12 body parts of Hurk to reassemble, 15 Geothermal Anomalies to investigate, 6 Clutch Nixon Challenges, and 28 notes from another visitor to Mars to find.

There was one aspect of the game that was infuriating, and it’s something I’ve dubbed “the Superman problem”. The game provides you a gravity belt and wings that allows you to wingsuit your way across the map, so naturally the only way to take you down a peg is to take these away from you. There are areas of the map where, inexplicably, the game forces you to the ground. With space crabs erupting every few seconds as you have to walk across the sand, these areas are pure frustration. When you give the player a ton of power up front, the only thing you can do is take it away — there’s very little middle ground. Thankfully, these are a small section of the whole.

A fun adventure with two of the best characters from Far Cry 5, Lost on Mars is a quick jaunt to the Red Planet with more hits than misses.

Ron Burke is the Editor in Chief for Gaming Trend. Currently living in Fort Worth, Texas, Ron is an old-school gamer who enjoys CRPGs, action/adventure, platformers, music games, and has recently gotten into tabletop gaming. Ron is also a fourth degree black belt, with a Master's rank in Matsumura Seito Shōrin-ryū, Moo Duk Kwan Tang Soo Do, Universal Tang Soo Do Alliance, and International Tang Soo Do Federation. He also holds ranks in several other styles in his search to be a well-rounded fighter. Ron has been married to Gaming Trend Editor, Laura Burke, for 21 years. They have three dogs - Pazuzu (Irish Terrier), Atë, and Calliope (both Australian Kelpie/Pit Bull mixes).
Related Articles: Far Cry 5: Lost on Mars, Let's Play
Share
Tweet
Share
Submit