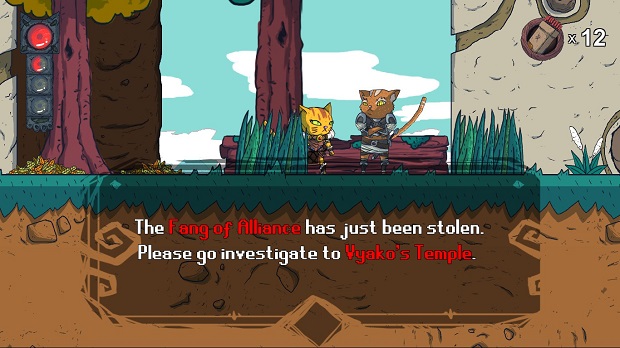 When Hunter’s Legacy caught my eye, I was hoping I’d be going into a fun little platformer about a community of cats. As it turns out, the platforming aspect is challenging and enjoyable, but the game as a whole is lackluster and not all that memorable.

The dastardly wizard Morodir has stolen the Fang of Alliance, and it’s up to you, Ikki the Huntress, to retrieve it. Otherwise, evil will continue to spread throughout the kitty kingdom. Early on you’re presented with a sword, a bow, and a map, then you’re sent on your merry way with vague directions as to the path you should take.

You’ll explore levels full of enemies to defeat and obstacles to conquer. Kill creatures, destroy blocks, and slash patches of grass for the chance to get coins, a handful of arrows, or health in the form of sparkling red fish. The puzzles present a worthy challenge, whether you’re jumping and dodging through some tricky platforming or utilizing the mechanics of the area. I loved playing with some of the bubble cannons, redirecting them so I could float through the air to my next destination.

One thing you’ll notice right away is the unpredictable difficulty dips and spikes. Instead of gradual progression, levels that are nice and easy come back-to-back with stretches of crushing difficulty. Some areas have infrequent checkpoints, which save the chests you’ve opened or the buttons you’ve activated, but the enemies continue to spawn in their same places for you to deal with.

There are two sword upgrades, two bow upgrades, two wallet upgrades, and three health upgrades. Collecting coins to afford them doesn’t take much time, but uncovering the ores you need for special upgrades is a different story. You want a better sword and a greater amount of hit points on your side during rough sections, but those can only be earned through much toil, which leaves you feeling frustrated and discouraged.

While I like the art style of Hunter’s Legacy, the sound design is iffy. The music is okay, I suppose, but the attack grunts get old after a while, and the health bar hums at you incessantly when it starts getting too low. I would play with the volume turned down, but that means missing audio cues for certain enemies.

Unfortunately, the story isn’t very substantial. It’s neat to chat with the NPCs scattered throughout Iripur Town – or those who sometimes appear randomly in levels – but most of the time they don’t tell you much. What makes the Fang of Alliance so important, and why is Ikki the only one who can bring it back home? This distinct lack of motivation makes it hard for me to want to try aggravating sections over and over again.

Much of Hunter’s Legacy feels like a missed opportunity. Making your main characters cats brings the potential of kitty-related weapons or attacks, or at the very least plenty of groan-worthy puns from the NPCs. Fish for health doesn’t seem like quite enough.

In the end, this game has all the standard platforming fare – some boss fights, some secret areas, and some serious precision required – but few things that make it feel fresh or unique.

Hunter’s Legacy is another platformer in a sea of platformers. Some of the puzzles are clever, going beyond jumping around to involve intriguing elements, but otherwise not much about it stands out from the crowd.

Sarah Marchant is an office admin for a nerdy t-shirt company. She has a soft spot for indie games, a passion for story-driven titles, and a weakness for cooking games and anything with zombies.
Related Articles: Hunter's Legacy
Share
Tweet
Share
Submit