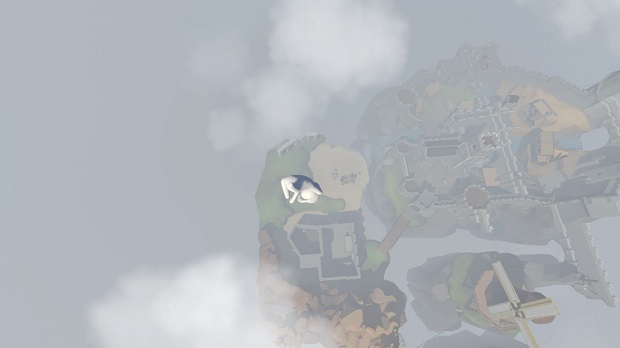 With clumsy physics akin to Octodad and subtle humor reminiscent of The Stanley Parable, Human: Fall Flat is a fun brain teaser of a game – when you’re not frustrated or feeling sick.

The premise of Human: Fall Flat is that you’re guiding your little gender-neutral buddy through a series of floating dreamscapes. There are eight surreal levels to conquer, made challenging both by the puzzles they contain and your brand new invertebrate body. You have to get used to an unfamiliar way of walking and interacting with the world; every step is overemphasized and you have a habit of wobbling around.

Unlike Octodad, you don’t have to worry about managing your legs as well as your arms. The arrow keys will move you around, albeit without much grace, but your arms are controlled by the mouse. Left and right mouse clicks affect their respective arms, and when you click and hold, you’ll reach out for whatever you’re looking at.

As you go, the puzzles begin to build on each other. First you learn how to press buttons with your new floppy arms, then you learn how to move train cars to access doors with pressable buttons, then you learn how to climb platforms to get to train cars, and so on. Sometimes it seems like sections are straightforward – after all, when it comes to “push this button to proceed” there really is only one solution – but in many places you’re able to think creatively to solve problems. Do you want to hopscotch across the cliffs, or use a rope to swing to the other side?

Small yellow remotes will sometimes pop up if the game senses you’re having a hard time navigating an area – for instance, if you spend a long time retracing the same patch of ground. When you hold onto the remote, it will display hint text in the air or play video instructions for the specific obstacle you’re facing. That’s where the slightly cheeky voice of the narrator comes in. Otherwise, the soundscape is fairly sparse. Sometimes music will kick on, but often you’re left with the sound of your own footsteps or ambient noises relevant to the level.

One notable downfall of Human: Fall Flat is the camera movement. Of course the game has to be in third person so you can know how to direct your wobbly friend, but it shares the same struggle as many other third-person titles of knowing what to do with the camera. Sometimes it glides smoothly, but at other times the movement is so jarring that it leads to slight motion sickness and headaches.

This mainly occurs when you use your hands to grab onto objects. I don’t know how many times I was hanging onto a ledge or trying to pick up a piece of debris and I had to take a breather afterward because my head was spinning so badly. The challenges themselves are just the right degree of difficulty, but it’s the jerky camera movements and constant zooming in and out that will frustrate you more than solving puzzles. Most of the time I played in short 20-minute bursts because I couldn’t handle much more.

Another small nitpick I have is that you can never quite predict how your hard-hatted friend is going to react to the controls. When you’re swinging around on walls, you can’t move the mouse or hit the arrow keys a certain way to keep you from flailing aimlessly, and you tend to slip around a lot on surfaces no matter how much momentum you had going in. Just because I’m playing a floppy character doesn’t mean I want to go full ragdoll.

One of my favorite things when it comes to video games is checkpoints. They make me feel like the game is rewarding me for doing what it wants. Human: Fall Flat has a decent amount of save triggers, generally after the completion of a puzzle, but some areas are so complex that I don’t want to quit the game and go through half the steps when I open it again. Not only that, but when you close and reopen the game, you may start at the same spot, but the actions you took when you were playing before won’t be reflected. Walls you broke down will be intact again, and doors you unlocked will be shut behind you.

There isn’t much of a story to this game. You get a bit of existential narration in the beginning, but it doesn’t continue throughout. In a way, you could say it’s about life and the obstacles that populate our days, forcing us to stumble around and find our own path through. But I could be putting too much thought into it.

Though there may be only a handful of levels in Human: Fall Flat, the replayability comes in when you revisit them and see if you can determine a different solution. However, due to all the dizziness and irritation, I don’t know if I want to go back after finishing the game. Who knows, I may be inspired to tackle it again someday, but for now I’m content to leave it alone.

Human: Fall Flat has its endearing, satisfying moments and its aggravating moments. The physics are fun to play around with and present a challenge, but the wonky camera movement is a weakness that’s hard to overlook.

Sarah Marchant is an office admin for a nerdy t-shirt company. She has a soft spot for indie games, a passion for story-driven titles, and a weakness for cooking games and anything with zombies.
Related Articles: Human: Fall Flat
Share
Tweet
Share
Submit