SaGa Scarlet Grace begins with one of my favorite ways a game can begin: with a personality quiz! In this case, you’re asked a few questions to determine which of the four protagonists you’ll start out as, Lenoard, Taria, Balmaint, and Urpina. I got the Lady of House Julanius Urpina for my first playthrough so we’ll use her as an example. As the game begins, Urpina is saying goodbye to her father as he heads off to lead their house’s army while she and her brother remain home to hold the fort. While Antonius safeguards the capital, Urpina and her retinue head off to patrol the surrounding area. Upon returning, our heroine finds her home ransacked and her brother missing. She then sets off to find her family and restore her house to its former glory.

After the opening, you’re free to explore the world and uncover the game’s non-linear narrative by walking around the pop-up book-like world map and interacting with places and people to trigger events. It’s a very interesting concept that falls just a bit short in execution. Because of the game’s nonlinear nature, oftentimes I found myself going everywhere and doing everything on a map after hours of little to no progress in the story, which itself is fairly uninteresting and forgettable. Eventually, I forgot what was happening in the plot until I stumbled across an island and found Urpina’s father. Thankfully, the game has something else to keep you playing for its lengthy runtime: the gameplay. 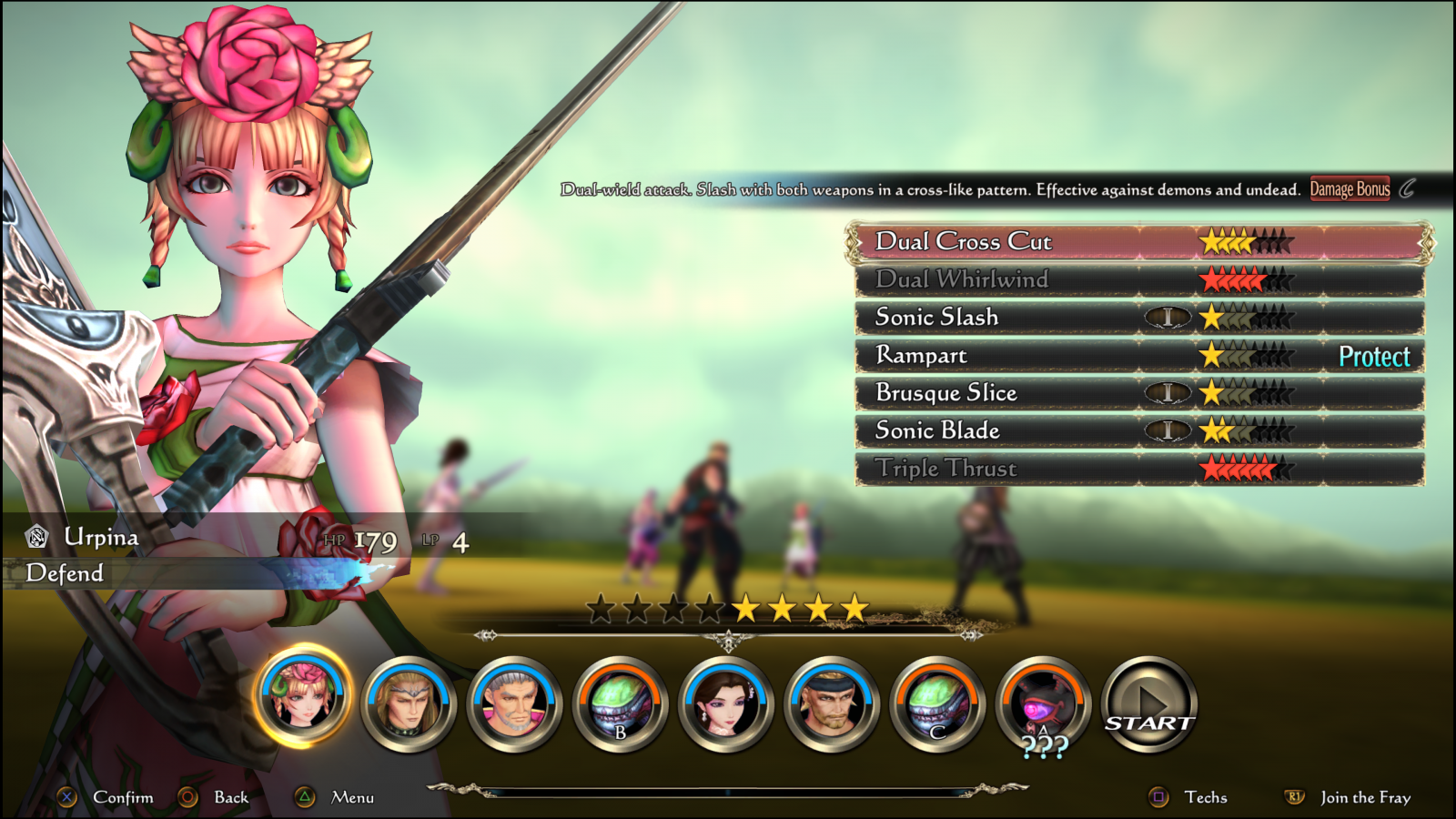 Scarlet Grace’s battle system is a bit like Connect Four, which may sound very weird but we’ll get to why that’s interesting in a bit. Some events you encounter on the map have your protagonist and their retinue engage in several battles in succession called an Engagement. Before each individual battle, you select who in your retinue will take part, their formation, and positions in that formation. Each character has several skills, classes, and attributes that makes them all unique. Their positions in the formation determine what buffs they will receive throughout the battle, such as increased speed or attack, while the formation itself determines how many BP, or battle points, you begin with and how you gain more. Actions your party can take all cost varying amounts of BP, and any combatants not using BP that turn will automatically defend. At the bottom of the screen, you can see circles representing the turn order of your party and the enemy; here’s where the Connect Four aspect comes in. If an enemy’s chip is situated between two or more of your characters and that enemy is defeated while in that position, the now connected characters will then perform what’s called a Unite Attack and dish out a ton of damage for free. The best/worst part? Your enemies play by the exact same rules you do. This is your short term goal in each battle: use your attacks to move chips around the turn order and connect as many of your units as you can. If this sounds complicated, that’s because it is. Scarlet Grace is a hardcore RPG, it’s complex and difficult, but that’s what makes it fun.

I do have a few complaints about its “hardcore-ness,” however; the game is way too difficult at times. I often found myself breezing through some battles in an engagement, while one would just destroy my party. Your characters get stronger through stat increases after each battle and by improving their equipment at a forge, but no matter how prepared I felt some battles would rely more on luck than others. Enemies would get critical hits at the worst possible times and subsequently use several unite attacks to devastate the rest of my party. Every time a character dies or you have to retry a battle, they lose at least 1 Life Point. LP is spent by participating in battle and is regained every two battles a character doesn’t participate in. These constant deaths have a snowball effect of always being low on LP, which means you can’t use your best characters in battle, which means every battle becomes even harder, which means you’re always low on LP. This system is meant for you to switch out your characters constantly, so you have incentive to recruit new party members and level them all up, but it quickly becomes a hindrance to progress. 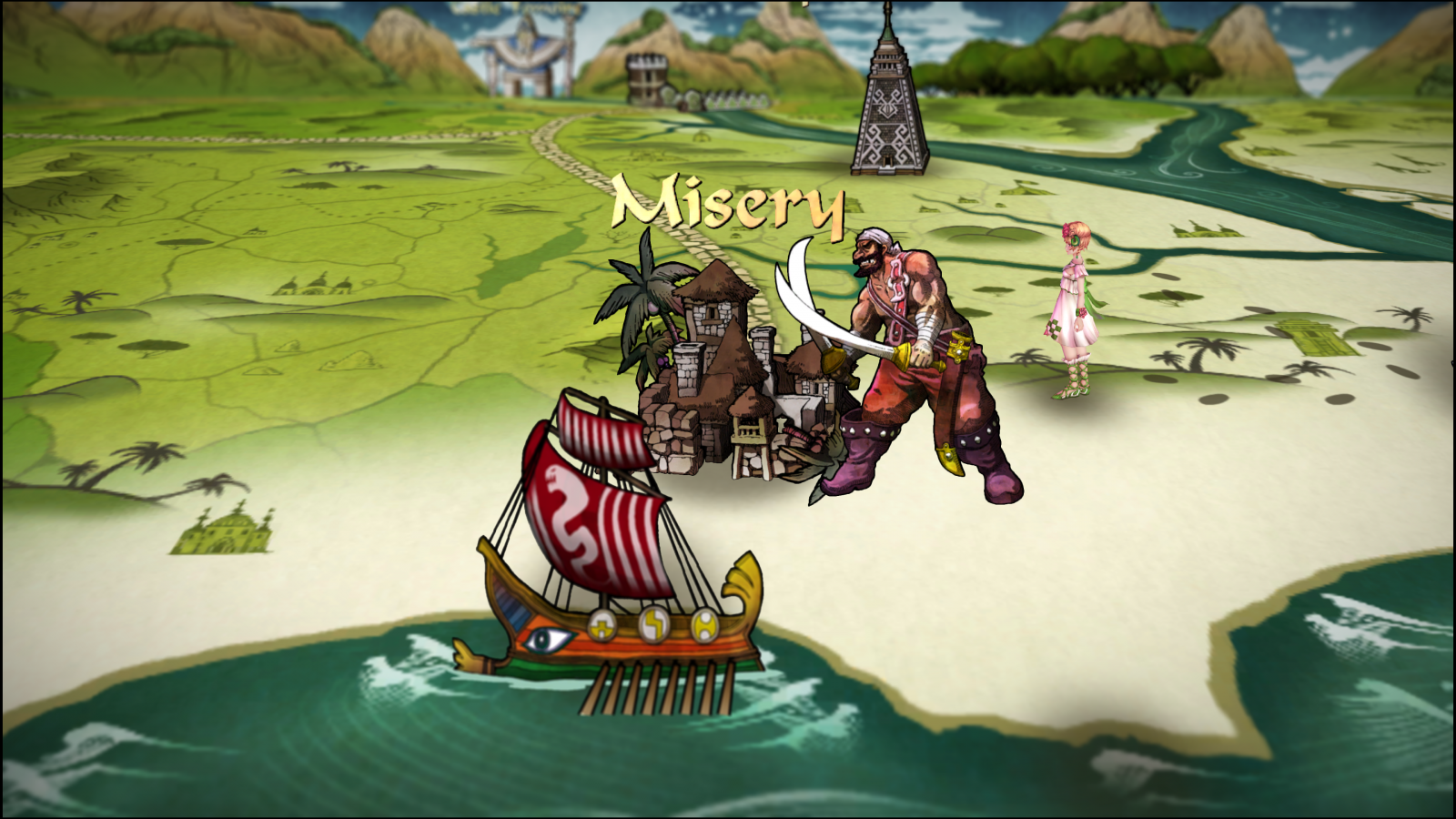 The art style of Scarlet Grace is simplistic and static, dialogue takes place between two non-animated characters in front of an illustrated background, but I love the look of the world map. Locations will pop up out of the ground as you approach which just adds a nice visual… pop to exploration. As an enhanced port of a PS Vita game, the 3D models aren’t the highest quality, but the camera work and effects in battle are astonishingly well executed. The action can move quickly, but it’s easy to keep track of and delightful to watch. While I’m gushing, I should mention the music. In a word, it’s amazing. It combines a more classical style of composition with modern instruments like the electric guitar; overall it reminds me a lot of Xenoblade Chronicles soundtrack. You’ll hear the same few songs over and over, but they never got old.

What SaGa Scarlet Grace Ambitions lacks in its plot, it more than makes up for in its difficult and complex battle system. Make no mistake, this is a hardcore RPG. You’ll be retrying battles over and over just to barely scrape by, and while it can be too difficult at times, the combat system is still a blast the whole way through.

David is the kind of person to wear his heart on his sleeve. He can find positives in anything, like this is a person who loved Star Fox Zero to death. You’ll see him playing all kinds of games: AAAs, Indies, game jam games, games of all genres, and writing about them! Here. On this website. When not writing or playing games, you can find David making music, games, or enjoying a good book. David’s favorite games include NieR: Automata, Mother 3, and Gravity Rush.
Related Articles: SaGa SCARLET GRACE: AMBITIONS
Share
Tweet
Share
Submit