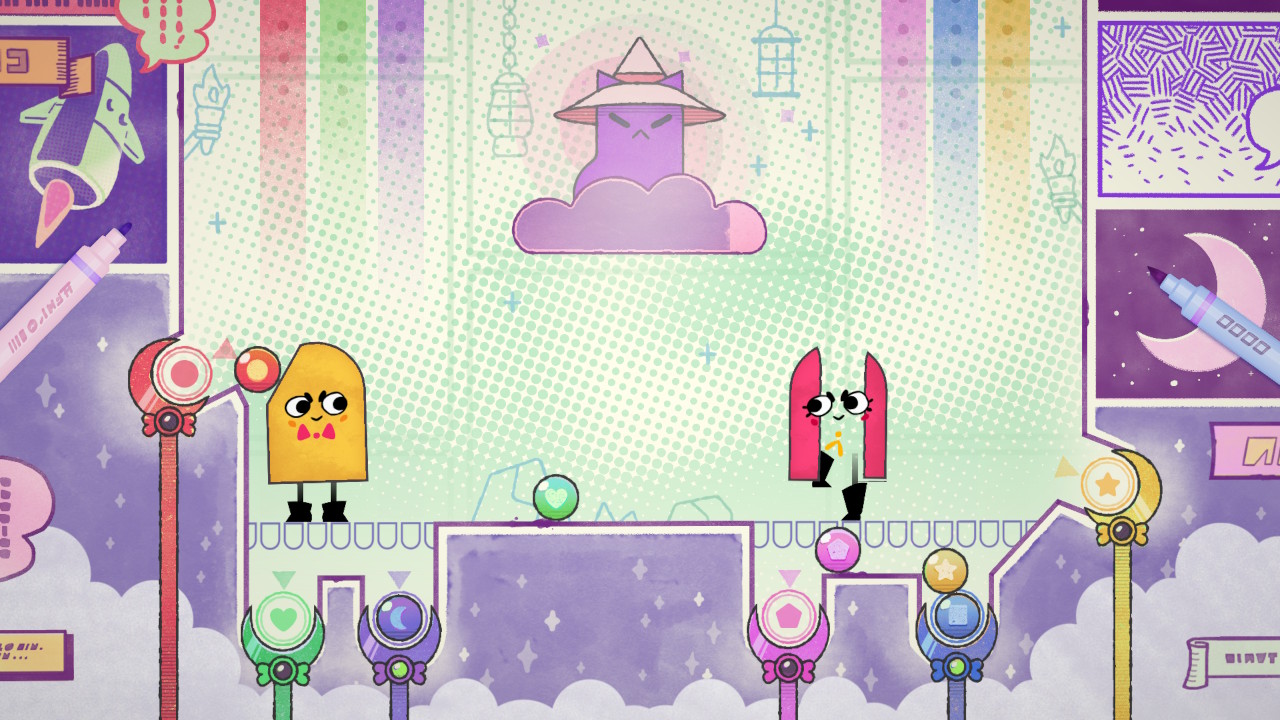 Snipperclips was one of the perfect ways to introduce the Joy-cons to the world. Here you had a co-op game that can be played without purchasing any additional controllers where you’re tasked with working together to solve various obstacles. You complete each other, as much as the Joy-cons completed the Switch. In Snipperclips Plus – Cut it out together!, SFB Games took everything great about Snipperclips and doubled down, adding two new worlds, an entire new world for Party Mode, a new “stamp mode,” and three new games for Blitz Mode. Because Snipperclips – Cut it out together! was already given a review when it initially released, this review will be focusing on the additions in Snipperclips Plus.

One of the biggest additions to Snipperclips is the addition of two new worlds based on comic books and a toy box. To access these levels, you must make your way through every world in the base game, making these worlds the fourth and fifth respectively.

This means that while the third world’s challenges were tough, these challenges can be absolutely brutal. While there are some levels that are simple such as cutting out pieces to fit, these levels are now time-consuming with you figuring out what the best shape for the task is. However, these levels aren’t just building on previous levels. There are plenty of new ideas as well such as using a cannon to blow apart a jar, grabbing three pieces of floating junk to feed a cat and a dog, or stopping four cars at the correct zones simultaneously.

Despite there being obvious arrows to indicate “pull,” we tried to push this like a button for nearly ten minutes.

Just like when the game was released initially, I asked my girlfriend of several years to help me with these puzzles. This, like last time, ended in disaster. While difficult levels lead to extremely satisfying moments of triumph, some of the puzzles were brutal. In one level, we were underwater and had to find a way to climb to the top. After nearly an hour of frustration and shouting, we gave up.

Party mode, Snipperclips’ four-player co-op challenge, has received an entire world of new levels. While not completely new, they are actually challenges of levels from the game’s five worlds beefed up to support four players. If you finish every level from a world, three of the levels are unlocked as harder versions in party mode.

These levels are definitely harder than their original and require cooperation from all four, or a great understanding of how to switch between two characters successfully. In the first level, you have to get three colored basketballs into specific colored hoops. This is a departure from the original level that only required you to get one basketball in a hoop. One of these hoops required someone to pull a lever down, someone else to scoop the ball up, and the other person to lift the second person while the fourth person sits on the floor playing in the dirt or whatever it is these shapes are standing on. Overall, these were welcome additions to Party Mode and nice ways to re-imagine previous levels.

For unlocking all of the normal stages, you’re given another surprise to mix up the levels: the ability to play each level as a random shape. While you can still clip your partner into the shape you desire, it’s actually more difficult in certain puzzles such as ones where you have to fill a shape.

Demonstration of a completely fair match of Hockey.

This change practically doubles the length of the game as you’re rewarded with a rainbow check-mark by finishing a level randomized. It’s not just the main game that can be randomized either, almost every mode in the game will have this option once you unlock it.

In addition to Party Mode receiving new levels, Blitz Mode received new ways to play as well. Plus adds three new games to the mix, doubling the games available. One of them has two teams catching fireflies in their respective jars. If you have four players, it’s easy to shape yourself into a bowl to scoop the flies into the jar. However, if you’re going one on one, you’ll have to rely on pushing the fireflies to safety.

The winner is whoever fills up their firefly meter first. This allows the other player to sneak into your jar and steal your precious fireflies. This mode had the longest battles, but it was still as enjoyable as the original three. If you play this game randomized, the game tends to favor creating a hook.

Blitz Mode: Get off my lawn edition

With the addition of stamp mode (more on that later) comes a mode where you freely move around a board stamping your own territory more than the other players. Players will have a time limit on how quickly they can fill a board with their own color, covering opponents colors or cutting them down to limit their ability to stamp.

When you find yourself in the unfortunate situation of being cut into small pieces, unable to cover more ground, there are helpful panels on the side to heal you to your original shape. Unfortunately, this game seems to be slightly unfair if you’re playing with random shapes as some are easier to cover more area than others, especially if you are long and rotate.

Blitz Mode: Stay away from my ball edition

The last game added in Blitz Mode is keep-away, a game where both you and your opponent have a ball on your head and must knock your opponent’s ball off. However, there is a drawback if you stray too far away from where you started in your quest to sabotage your opponent. Once your ball falls off, another ball falls from a chute above and you have to catch it before it falls as well, giving a point to the other player.

This was a game that was also made fair by making the shapes random, but with how short it lasted, it lead to hilarious situations. I had only two chubby cheeks in my shape while my opponent had several spikes to choose from. Even though the odds were clearly stacked against me, it was a lot of fun trying to take on the challenge. Overall, this was my favorite of the added games.

The last main addition to Snipperclips is Stamp Mode, a small distraction where you dip your piece into various colors and paint a portrait with plenty of possibilities. This mode was reminiscent of an online paint room where you’re drawing the same picture with other people, sometimes having your art thwarted in the act.

This isn’t the most efficient way to draw, but it’s an interesting challenge for anyone wanting to create art with limitations. Cutting into different shapes allows the player to create interesting designs, which is where I felt Stamp Mode shined.

I’ll see you guys at the Smithsonian!

In the end, Snipperclips Plus added plenty of welcome additions. If all of this wasn’t enough, Pro Controller support was also added, which is definitely welcome to anyone that prefers a larger controller over a sideways Joy-con. When Snipperclips was released, it cost $19.99. Snipperclips Plus is $29.99, or $9.99 if you already own the base game. There is even the option to purchase a physical copy of the game. For something that almost doubles the content of the game, this is a very fair price and completes one of the Nintendo Switch’s most interesting initial releases. Now if you’ll excuse me, I have a lot of apologizing I need to do.

We hate each other just as much as we love each other now, but at least we solved some puzzles.

Snipperclips - Cut it out together!

Snipperclips Plus completes a fantastic cooperative puzzle game. The additional games are a blast, stamp mode is a fun distraction, the new levels are fun with creative ideas, and the ability to play as random shapes breathes more life into an already lively batch of brainteasers.

Sean Anthony likes to combine two of his passions: gaming and writing. Gaming has been a huge part of his life ever since he played his first game as a child, Kirby's Adventure. He aspires to have his name attached to an article that makes the whole world go, "Huh, that's neat, I guess."
Related Articles: Snipperclips - Cut it out together!, Snipperclips Plus - Cut it out together!
Share
Tweet
Share
Submit