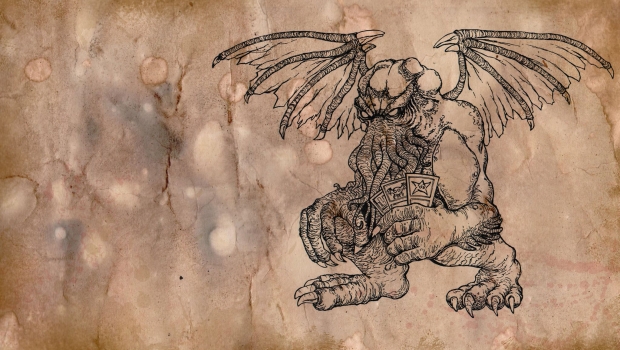 Lovecraftian horror has served as a fertile landscape for games over the past several years, most notably with Arkham Horror and the subsequent Eldritch Horror games from FFG. Hobbyists fell in love with the non-linear game engine, staggering depth, and replayability. But what makes those games among the very best of the past decade is in how masterfully they leverage theme to capture the sense of ominous dread and the inevitability of fate; eventually darkness comes for us all. As such, these are not necessarily games to be “won,” and the cooperative mechanics underscore the severity of the threat. Indeed, an uncoordinated effort is almost guaranteed to fail. Sit down with that understanding and you will almost always enjoy the game.

The significant challenge for Duel Grounds, creators of the Cthulhu Deckbuilder game, is how to capture that same spirit while not presenting yet another iteration of Arkham, and to do it as a deckbuilder, with all the preconceived ideas about how that ought to work. There’s also legitimate risk that the deckbuilding format is already passe, so any new arrival must offer a very good reason to invest time and money into it to differentiate it from the deckbuilders already sitting on our game shelves. My group now plays the DC Comics Deckbuilder exclusively – it is very well executed, beautifully presented, and empowers players with several strategies which can be used successfully.

The Cthulhu Deckbuilder attempts to strike a happy medium between Arkham and DC. The game mostly works, and is even fun, but not in the same way as Arkham. The despair of looming damnation is conspicuously missing. Quite the contrary, the “Ancient Ones” are treated with no more respect than the super-villains in the DC game, as trophies to be collected and counted at game’s end. Whereas super-villains are as numbered and varied as the heroes that fight them, the great old ones of Lovecraftian horror are relatively few. The curious-minded who seek them out don’t come home with the stuffed heads of Nyarlathotep or Azathoth to mount above their fireplace mantles – they get devoured.

Regarding the commissioned artwork, my demo pack is incomplete, with about half placeholder images instead of unique art, but the developers assure me that every card name will have custom artwork by the 2016 launch. The art for the Ancient Ones is quite good, and they’ve made the choice to use a reserved sepia-stained color palette. Other cards fail to evoke the kind of terror imagined by reading the stories. The good outweigh the not-so-good, and on the whole they have an effective visual product.

This is a conventional deckbuilder game. Players begin with waste cards and currency cards. A set of five cards from the play deck are dealt face up in the center of the board to be purchased or otherwise acquired and then added to player decks. Hence, deckbuilding. The play deck includes standard equipment borrowed from the Lovecraft universe, like Lab Components, Holy Water, and the quintessential Tommy Gun. Spells with a variety of effects, artifact equipment, and allies also populate the play deck. Locations, once played, contribute lasting effects for the individual player, and event cards do the same to all players when they are revealed. Finally, horror cards provide monsters for the players to exhaust their hard-earned economies against. It is a healthy variety of card types and effects. This is where the game succeeds, and, when taken for what it is, is fun.

Combating horrors requires not only sufficient power, the game’s primary currency, supplied by strength cards, spells, equipment, locations, and previously-defeated horrors, but also some amount of insanity, as in, you must be crazy to go after these things. The more deadly the creature, the more power and insanity you need to banish it. The Brown Jenkin can be crushed like the oversize rat it is, with just two power and zero insanity, while the terrifying Star Spawn takes six power and four insanity.

I like the idea of this dynamic, and many card effects contribute to players’ increasing insanity. Each player is supplied with a D20 to keep track of this number, and once you get into the teens, you’re so far gone you become defenseless. Going past 20 puts you into the asylum and out of the game. But before you worry that it may be too easy to lose your mind, many cards reduce insanity to manageable levels.

Adding depth to the experience, each player is randomly assigned an investigator, such as the Professor, the Gangster, and the Occult Specialist. Each investigator has a special ability which benefits the player and can contribute to a strategy of play. All of the abilities are helpful – there are no clunkers, and none are so powerful as to be broken. My only complaint is that there are not more of them, but I’m sure Duel Grounds has ideas for expansions should this sell.

All of this is well and good, but the chthorian in the room is the Ancient Ones deck. Many of your favorite pan-dimensional planet killers are stacked neatly to the side of the storyboard, just waiting for a sufficiently powerful mortal human to destroy them, single-handed.

The game designers wanted a mechanism whereby a disproportionately powerful player could not run away with the game, which makes some sense, except Cthulhu is no one’s punching bag. Appropriately, Cthulhu, along with Hastur and Azathoth, are far and away the most challenging to take down. As a house rule, I recommend placing those three at the bottom of the Ancient Ones deck. Cthulhu’s awakening power, which triggers when revealed, is to reduce all players’ insanity back to 0, and then on every subsequent turn they lose up to 2 insanity. Though the idea that encountering Cthulhu having a positive effect on one’s state of mind seems unlikely, it makes him almost impossible to beat until the end game, when players are able to chain card effects, creeping closer to the madness necessary to point a gun at the king of monsters.

As this game is still in pre-deployment, I offer one suggestion: make the insanity dynamic more of a risk-reward. It is too easy to reduce insanity – too many card effects offer this, and the insanity cost to take down the Ancient Ones is too low. I would go so far as to make the minimum insanity threshold to slay the basic Ancient Ones 13, and put Cthulhu and Azathoth at 19. Then also double or triple their victory points. Do that, and this game recovers much of the reckless desperation that is missing. You also allow players who are way behind the chance to score a huge number of victory points at the very end with a high-risk play. Finally, I would change Cthulhu’s awakening power to add insanity instead of remove it. This just makes sense, and it also accelerates toward the finale since he will be one of the last three cards revealed. Players would need to manage their insanity much more carefully near the end of the game or risk going past 20 and being put out.

Duel Grounds has a product with potential. The economic engine is solid if somewhat plodding in the early going, with one one key ingredient that needs to be fixed. But it is the most important facet of this game, because the horror theme is what is going to entice people to buy it. If they fail to fully leverage that factor then it’s just another deckbuilder in a very crowded space. Moreover, as Lovecraft’s stories are now in the public domain, not getting this perfect only incentivizes someone else to take the idea and do it better.

Standard deckbuilder mechanics, with no significant innovations in that already saturated genre. The artwork is good, and the cards do well leveraging the stories of H.P. Lovecraft, but this game is not at all horrifying, and in that respect it fails to capture the imagination of die-hard fans.