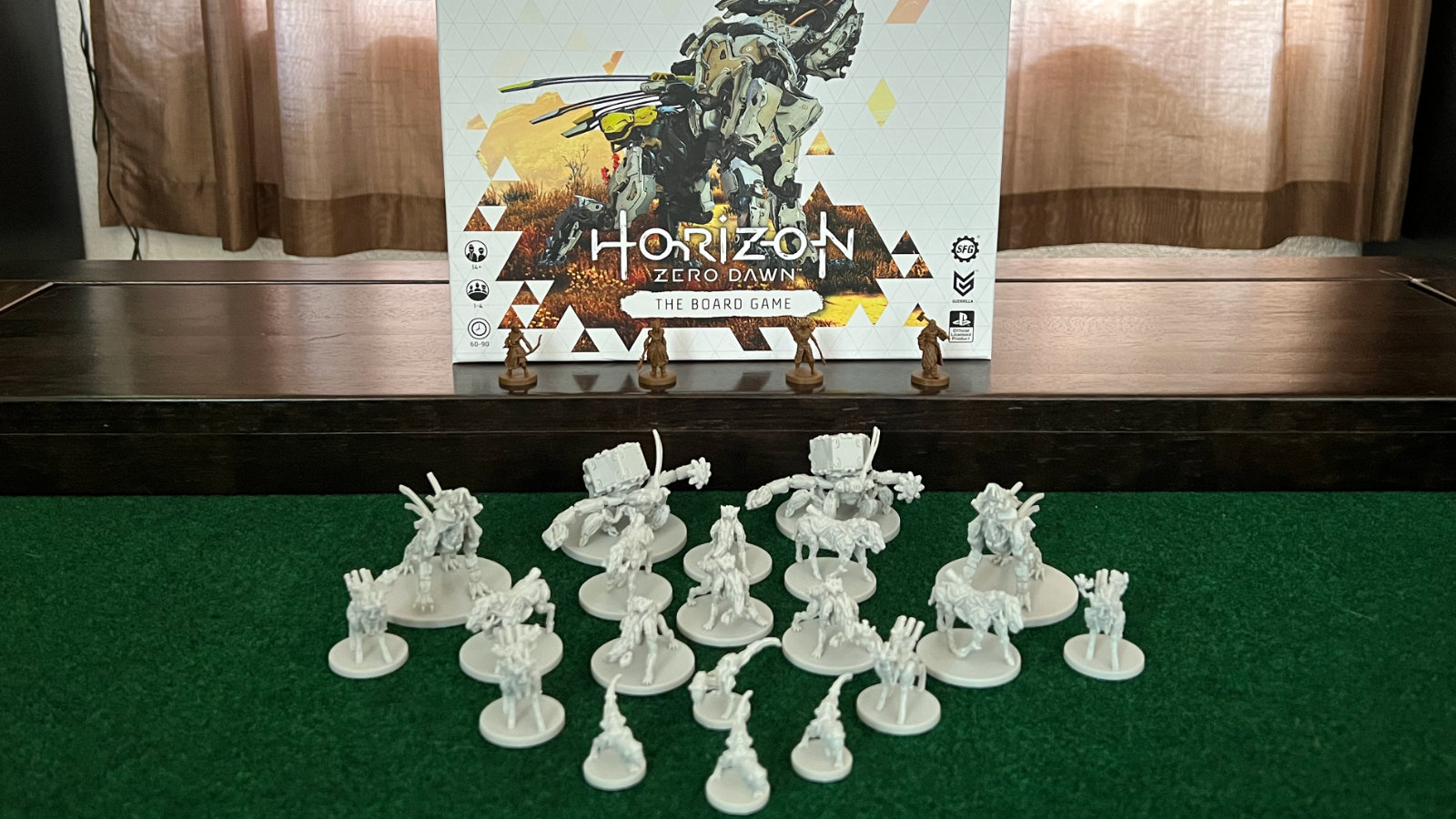 At a glance a video game to a board game is a vast undertaking. Much like tv shows and movie adaptations of video games, many set out with the goal of presenting a video game in another form and capturing an even wider audience. With this goal in mind, there are more failures than successes. Horizon Zero Dawn the Board Game is one that stands out above the rest, albeit the fact that it does not stand out much higher than others. In turn where so many set out on such an endeavor and fail, Horizon does not.

A big problem many video games have when transitioning from video game to board game is getting the board game to evoke the same feelings players have when immersed in the video game. This feeling, often, is what keeps players coming back for more. It is this feeling that Horizon achieves throughout an entire gameplay session.

Horizon Zero Dawn the Board Game designed by Sherwin Matthews and published by Steamforged Games, is a competitive/co-op board game for one to four players. Playtimes will vary based on player count needing anywhere from 60-90 minutes per player. In Horizon players take on the role of hunters from the game’s different tribes. As hunters each player will adventure into the wilds to hunt down and destroy some machines, to gain the most glory at the end of each hunt. Glory is then compared and whichever hunter has the most glory receives either a blazing(3 points), full(2 points), or half sun(1 point) based on player count. 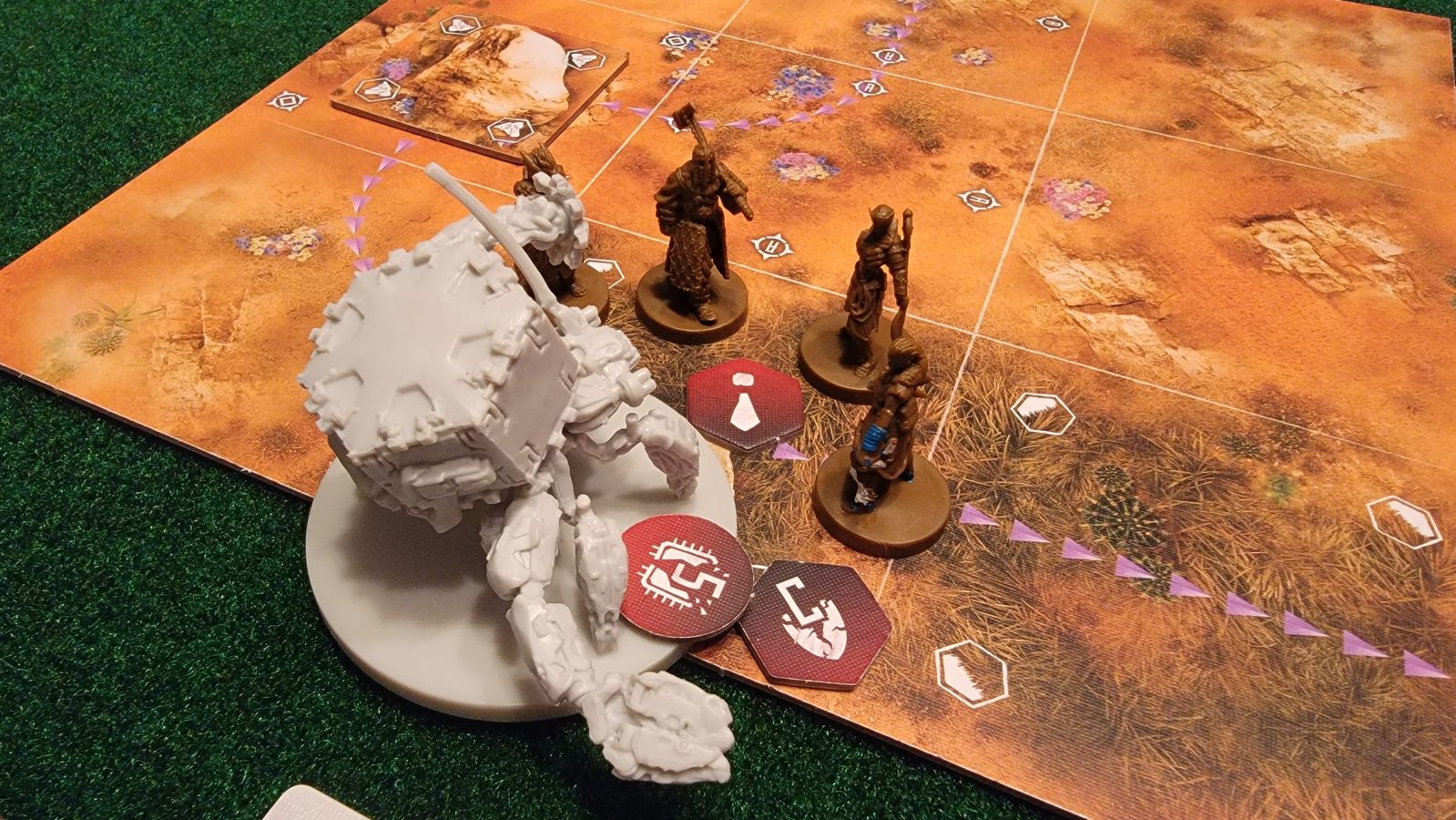 In the post-apocalyptic wasteland of Horizon, there is a tribal setting that presents many opportunities and many dangers. It is these opportunities and dangers that drive the experience of Horizon Zero Dawn the Board Game. a game of Horizon is played over five different hunts(not to be confused with rounds). Each hunt is determined by the choice of the player who currently has the leader token. The board consists of different board pieces based on each individual hunt, and different monsters also based on the hunt. There are three different levels of hunts, yellow(easy), orange(medium), and red(hard). On each of the tracking cards there are individual monsters so that each hunt is unique. Following that the monsters are placed on the map for players to hunt.

This gives hunters/players an indication of how difficult the hunt will be. The tracking cards also dictate other various things such as rewards for completing each hunt, and level of items available in the market. To start a game hunters choose one of four different tribal characters such as a Nora Marksman, Carja Warrior, Banuk Survivor, and Oseram Forgesmith. Once character choices have been made, and the board set up, it is time to choose the first of five hunts. The oldest player receives the leader token, and the player with the leader token then draws the top 3 cards of the tracking deck and chooses one card which designates which hunt players will go on. Once chosen the board gets constructed and enemies placed along with other obstacles or machine corpses.

After the board is set up play is ready to begin with the player that controls the leader token. Hunters/Players have their character card with an unique ability on it, one ranged and one melee weapon, and lastly a piece of armor unique to their tribe. Each hunter also receives an action deck and an upgrade deck accompanied by an upgrade tree. The first player begins by shuffling their action deck and drawing five cards. Players then can use their cards to take up to two actions. An action can include Sneak (moving one space without making noise), Sprint (moving two squares alerting any adjacent enemies), Distract (move a non-alert enemy within two squares one space towards target square), Craft (shuffle the bottom three cards of your discard back into your deck), and both ranged or melee attack. Each action can only be used once and once both actions are taken players activate all of the monsters on the board. 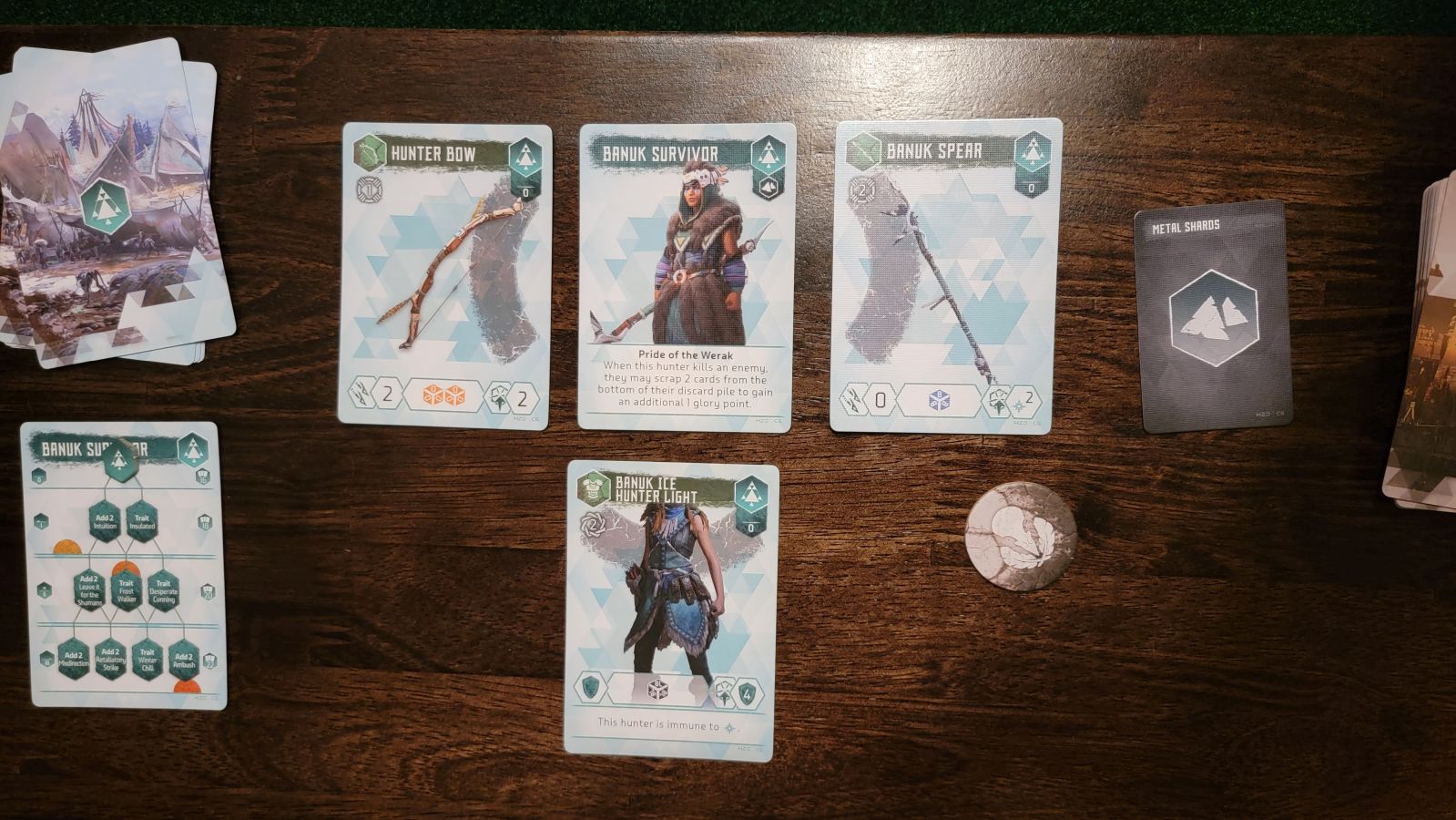 Starting with alerted enemies, then moving on to non-alert enemies, players move them monsters according to their corresponding cards. After enemies are activated, players check to see if they have reached the hunt threshold, that is a number that players must reach by killing a certain amount of enemies, all worth different values. If the threshold for the hunt has not been reached after a player’s turn then the game continues with the next player’s turn. On the other hand if players have reached the threshold number by killing a certain amount of active monsters, then players vote whether to continue the hunt or end it. If all of the monsters are destroyed the hunt ends immediately.

When a hunt ends players go through the campfire phase. In the campfire phase players all compare who has achieved the most glory through destroying monsters and their components. After comparing the person with the most receives a blazing sun worth three points and the leader token. Second place receives a full sun token worth two points. Third place receives a half sun worth one point, and fourth place receives no suns but is granted the fledgling token. The fledgling token allows a player in hunts two through five to choose an event card which acts as a bit of a catch up mechanic. 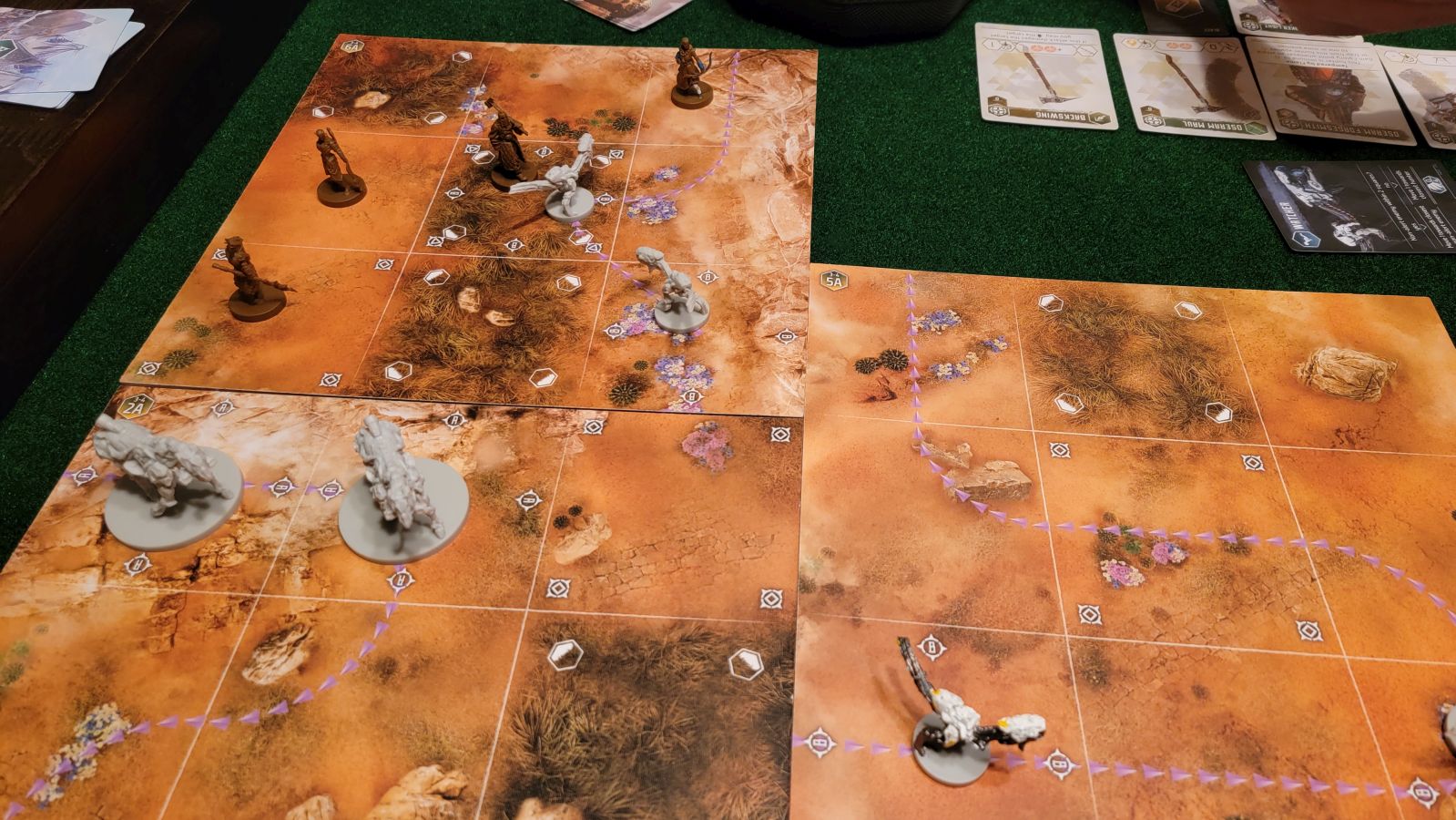 Next players go to their upgrade tree card and if the hunt was a level higher than the player’s current tier of upgrade, all players perform a level up function. This function adds more cards to the players deck to help them avoid fainting during an encounter, and provides either upgraded items or extra abilities. Once players are done leveling up the merchant step takes place. In the merchant step players take one of three decks of merchant cards based on the current level of the completed hunt. After that happens players then layout cards from the merchant deck of different types, one weapon, one armor, one miscellaneous, two modifications, and two ammo cards. Next starting with the player that has the leader token players each take turns buying cards from the merchant until everyone has passed in a row.

This completes all three phases of a hunt, and players now repeat and set up for the next hunt. After all five hunts have been completed players compare how many points they have received from their varying sun tokens and whoever has the most is crowned the strongest hunter. While there are a great many more details that go into playing a game of Horizon, the general overview speaks to the thematic gameplay that Steamforged Games achieved with Horizon Zero Dawn. 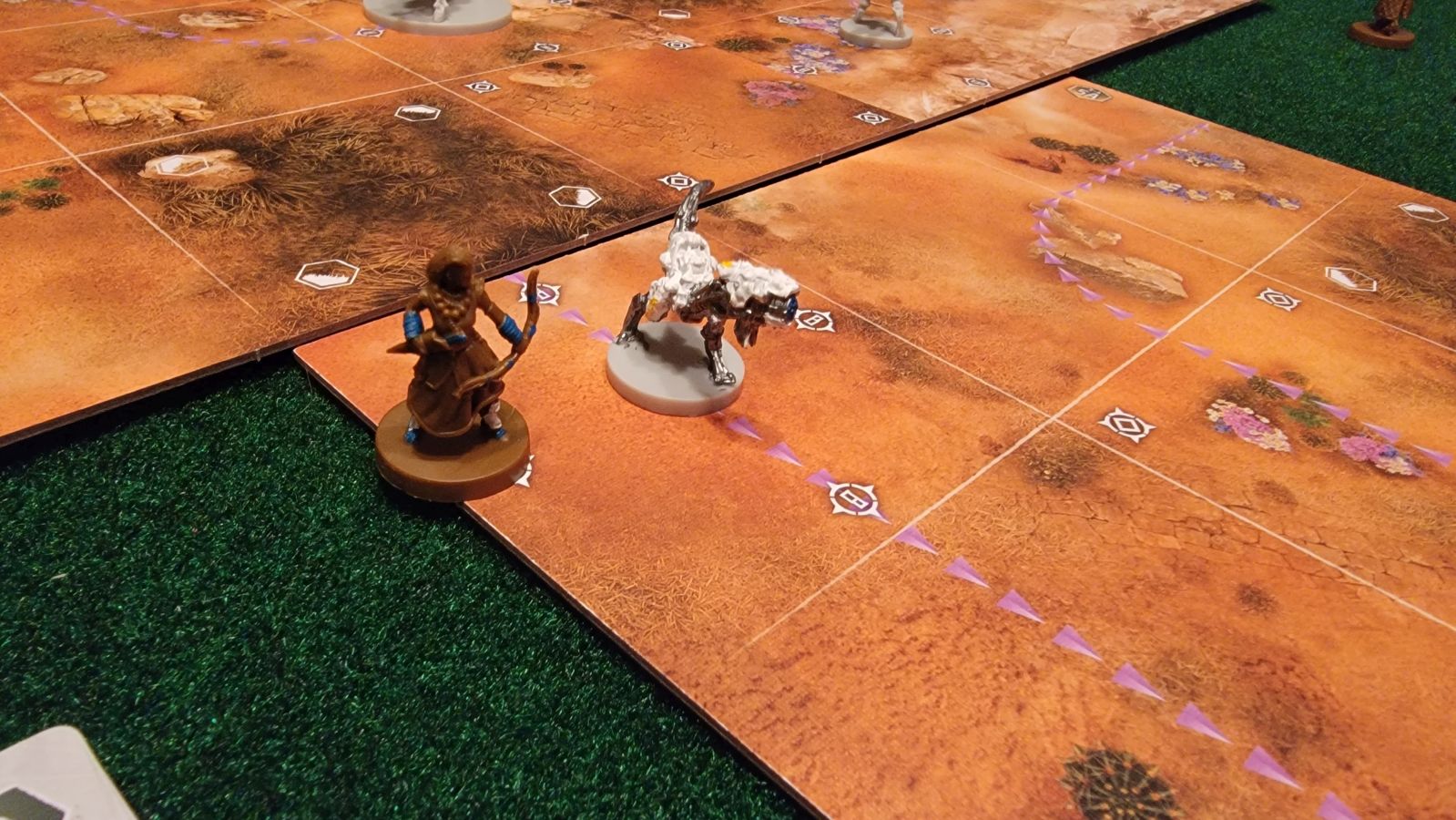 Throughout my many plays of Horizon Zero Dawn the board game, a few things became glaringly obvious. First and foremost, like many other Steamforged Games products, their miniatures are some of the most exciting minis to own for any board gamer, or any fans of tabletop games, or any collector in general. Second, also like many Steamforged Games products, Horizon suffers from what started as such a promising game turns out to be a clunkier experience that will keep most players from playing through an entire game.

Overall Horizon Zero Dawn the board game could use some more work to become a full fleshed out game that would keep players coming back for more. The game needs certain player counts or certain variants to become a full experience that is not one sided. Throughout the game many times players would have either good luck or bad luck rolling the dice to attack monsters, and would often leave monsters with only a couple points of health, ripe for the picking of another player. This sort of kill vulturing makes players not want to go all in on damage against a monster only to lose out on rewards. The game would also benefit from either a companion app, or an easier upkeep throughout both set up times for each hunt, or merchant deck setup.

Horizon Zero Dawn: The Board Game

At the end of the day my time with Horizon Zero Dawn the board game was an exciting and fun one. To that end the game needs a much more concise rulebook, a less time consuming upkeep between rounds, and ultimately a catch up mechanic for the player to make running away with a game less annoying and more of an actual game. What starts out as a fantastic game and idea and experience, turns into a less than ideal lopsided game that needs more time and work to become a real boy, so to speak.