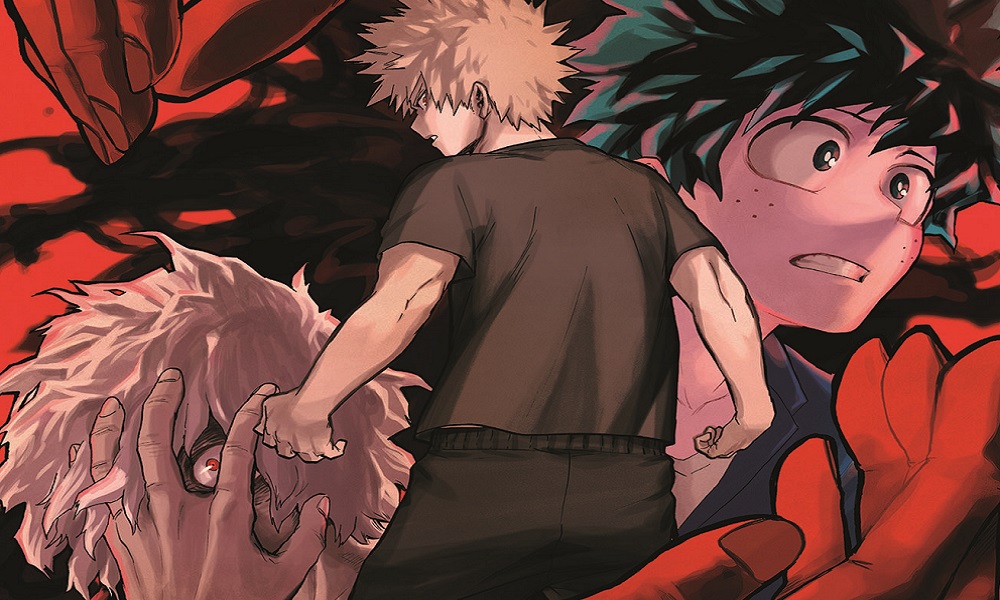 Like a lot of Shonen Jump fans, My Hero Academia is one of my favorite manga currently running. As I’ve started collecting comics since 2015, I’ve grown to love the dynamics of superheroes and what makes them likeable. My Hero Academia manages to capture the spirit of the golden age of American superhero comics and translates it to Japanese sensibilities, and because of that, there’s a nice overlap between comic and manga fans for this series. Volume 10 of the series has been released stateside, and it’s a great addition to the story. An action-packed volume with high-stakes battles, this volume also holds some serious drama and insight with failure and accountability, and humanizes the series with its developing cast.

Volume 10 picks up where the last one left off, with Midoriya and the rest of the U.A. crew trying to prevent some villains (led by Shigaraki and someone behind the shadows) from kidnapping Bakugo. While the crew is successful in tracking one of the villains to their hideout, they ultimately lose Bakugo as the kidnapping plot is successful. Desperate and enraged, Midoriya quickly tries to heal as a makeshift search team of Yaoyorozu, Kirishima, Iida, and Todoroki join him in finding their kidnapped friend. In the meantime, the hero association needs to deal with the PR disaster and crisis of losing a student at their school, with the perception that superheroes might not be the invincible stars the public adores. By the end of the volume, a rescue attempt is underway while a new threat looms in the distance, rearing its ugly head at our protagonists.

Ever since the beginning of the summer vacation arc, My Hero Academia has been getting into more serious territory, and that’s something that I’m really enjoying here. You can see how distraught All Might and Midoriya, paragons of a Superman-like ideal, are by losing a student and best friend, respectively. It’s these moments that truly make the series stand out from the others, and humanizes the cast. Since they are arguably the strongest characters currently in the series, it’s significant in that they failed. The repercussions aren’t glossed over either, as the president of the university and other faculty have to admit their faults on live television in front of pessimistic journalists. The middle chapters in this volume are truly depressing, and fall under some of the darkest moments in the series so far.

That being said, there’s more than enough action to satisfy; the end of the summer vacation arc might have ended in failure, but our main characters gave it their all, and the art style accentuates this. You can see Midoriya’s scars and bruises as he’s getting assisted by friends, and this highlights the desperation of the situation at hand. There are still a ton of quirks used in these battles, and while these chapters mostly focus on the aftermath, they’re still very pretty to look at. The biggest thing here, however, are the last few chapters, where a rescue team for Bakugo forms. Since the five students are merely scouting for Bakugo rather than getting into direct conflict, we get three different perspectives: the makeshift team, the villains who are holding Bakugo hostage, and the professional heroes. The battles near the end start off climactic and only ramp up from there, with an ominous figure (and the series’ biggest villain yet) in the shadows, much to All Might’s dismay. Get ready for some fireworks, because the series is just getting started.

Volume 10 is a pivotal point in My Hero Academia, as it sets up a lot of the framework for the series going forward. So much so that the main flaw here is that it feels a bit too serious at times. The humor is minimized here, and most of the lighthearted moments are played for drama rather than comedy. At times, this volume of My Hero Academia feels more like a gritty reboot than a continuation of the series. However, while there is a slightly somber tone in most of the chapters, this volume includes a little side story with everyone’s favorite frog girl, Tsuyu. This little backup piece at the end of the volume delves into why she called herself Tsuyu, and the resulting story is heartwarming and gives you a lot of love for the character.

A foreboding sign of things to come for the future, My Hero Academia volume 10 sets up a monumental new villain as well as gives more reasons to like the developing cast. This volume nails what makes superhero comics so enthralling, and I can’t wait for the next installment.

Elisha Deogracias is an aspiring accountant by day, freelance writer by night. Before writing for Gaming Trend, he had a small gig on the now defunct Examiner. When not being a third wheel with his best friends on dates or yearning for some closure on Pushing Daisies, he's busy catching up on shonen manga and wacky rhythm games. Mains R.O.B. in Smash. Still doesn't know if he's a kid or a squid.
Related Articles: Beyond the Page, My Hero Academia Volume 10
Share
Tweet
Share
Submit