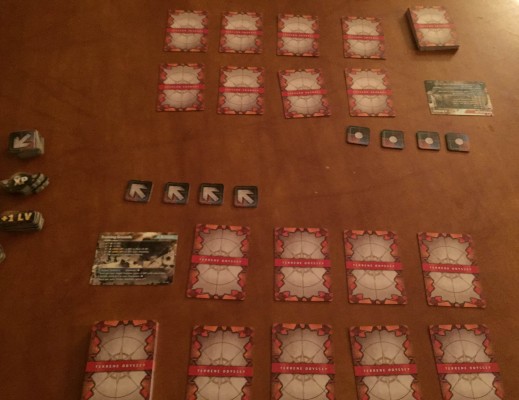 Through all the chaos in the world of Terreria, parties of heroes are searching for great wealth. There is only one problem. Other groups of heroes keep getting in their way. In Terrene Odyssey, you are the commanding officer leading your band of characters to victory over the opposing officers and their characters. Terrene Odyssey emulates the style of party-driven Japanese Role Playing Games, such as the Final Fantasy series, allowing you to control large parties of interchangeable heroes.This style of game does feature the feeling of adventure and exploration of other RPGs, but it puts a higher focus on combat systems with almost streamlined stories. Terrene Odyssey captures the genre very well.

The six included decks are built around a unique hero, as well as a ridiculous amount of cards for building your deck. Players start by choosing four characters as well as an item or command card for each hero and placing them face down. You can choose your own starting layout or follow the suggested starting layouts provided in the box. The rules even recommend different starting layouts based on whether you are going first or second. Players also choose a terrain card determining how many Action Points allotted, special actions, and bonuses characters get when gaining experience.

A turn consists of the following phases: command, draw, action, and end. During the command phase, you lose any unspent actions from your previous turn (you may save some because some actions can trigger during your opponent’s turn and you do not need to spend all your actions) and you gain the amount of actions produced by your terrain. The draw phase is when you draw one card. The bulk of your turn is taken by the action phase where actions are taken. Finally, the end phase is clean up. Players take turns until one has either taken 50 damage or has no active characters remaining.

During the action phase, you can perform any number of free actions and up to the number of spend actions as you have Action Points. The free actions you can perform include play a new terrain, hide a character, assign items or commands, trade face-down items or commands, dismiss a card, or run. The free actions do not cost Action Points. Playing a new terrain from your hand or switching between terrains cards allows you to shift your overall strategy. I did not find myself changing the terrain, but this offers another layer of strategy during the game.

And everyone is out.

As a free action, you can also play a card face down. You won’t often play cards face down unless you’re going to use them right away (activating cards is not a free action). However, playing cards facedown that you don’t intend on using right away could be used as a bluff or way to organize your thoughts. You can play new characters from your hand face down, but you have to pay attention to your characters’ Supply Point value. You can never have more than a value of four in terms of Supply Points; each face down card counts for one Supply Point, while face-up cards have variable costs. You can attach an item or command card face down to a character that does not currently have one.

Planning ahead for multiple turns can be difficult in this game because each card does so much, but a few free actions address this. If you accidentally play the wrong command or item card on a character and that card is still facedown, you can have the character controlling that card trade it with another character. If a card is no longer serving you well, you can dismiss any character, item or command card you control freely, but, if there was any damage on the dismissed card, you take it to your 50 hit points. Finally if you are playing the best of three games and you aren’t doing well, you can forfeit, giving yourself a slight bonus in the next match.

Thank goodness for these player aids.

Spend actions use the Action Points that are rewarded from the terrain cards, and they include recruit a character, use a character, item or command, and attack. Recruiting a character simply flips that card face up to use in future actions. Note that the total number of Supply Points of all your characters cannot ever exceed four (each facedown character contributes one). It can be difficult to choose when to flip which character because each character has several statistic and abilities. Actually using the ability printed on a character, item, or command also costs an action. Every single card has one or more abilities, so it can take a while to figure out your layout and your deck. However, the abilities themselves are very straightforward, despite questionable keywords. These abilities can be anything from drawing more cards to increasing attack values to making character more expensive to use to doing direct damage. Note that you can use an item or command card’s ability the same turn you activate it. Also note that some abilities can trigger during your opponent’s turn.

In this case, the big red dude is attacking that blue guy. With modifiers the red dude has an attack of 45, blue has a defense of 10. So, 35 of red’s attack gets through, killing the other unit who has 25 life. The red guy gains an experience point. 10 damage gets through and hits the opposing player. It becomes intuitive, I swear.

Terrene Odyssey is a good game implementing the mechanics of a Japanese RPG. The art is wonderful. The base rules and combat are simple, and everything is streamlined, distinguishing it from similar games that inundate you with rules. Not everything is covered in the rulebook or the player reference sheets, but those are logically laid out. However, despite the simple rules, so many options exist amongst the six pre-constructed decks, not to mention the other included cards. But don’t even look at those card until you are very comfortable with the game. You can get a lot out of this game if you give it the chance and the time. The decks and cards are all incredibly balanced, but also radically different. The fact that the box comes with starting decks, suggested starting layouts, and deck strategies is simply amazing. The designers have more to help you get into the game than most other companies.

Unfortunately, I actually wish the designers did more in terms of helping players learn the game. I think this game might need a learn-to-play mode where you can only have two characters out or something like that. It might be less fun, but it might be necessary. Despite the simple rules, I think the first few games will frustrate new players. Right out of the gate, you have to consider the effects of nine different cards, each with multiple statistics and abilities. Unfortunately, because this is an indie game by a not-so-well-known company, I think many people will avoid this game because of the time commitment it requires. This is certainly a shame, because the game is excellent and a lot of fun. If you dedicate time to this game, it will reward you greatly. Other than that fact, the only the only other negative I have for this game is the tokens. The number of stats to keep track of can be cumbersome.

Overall, if you do not mind a game that requires multiple plays, but greatly rewards those plays, I would highly recommend Terrene Odyssey. It would be ideal for anyone looking for the thrill of deck-building a very deep game but not interested in keeping up with endless booster packs or expansion packs.

This is a game can be overwhelming for the first few games, but once it starts to click it is worth it. This is an ideal game for anyone looking to get seriously into a card game. It truly rewards multiple plays and offers a lifetime's amount of gaming in the box.