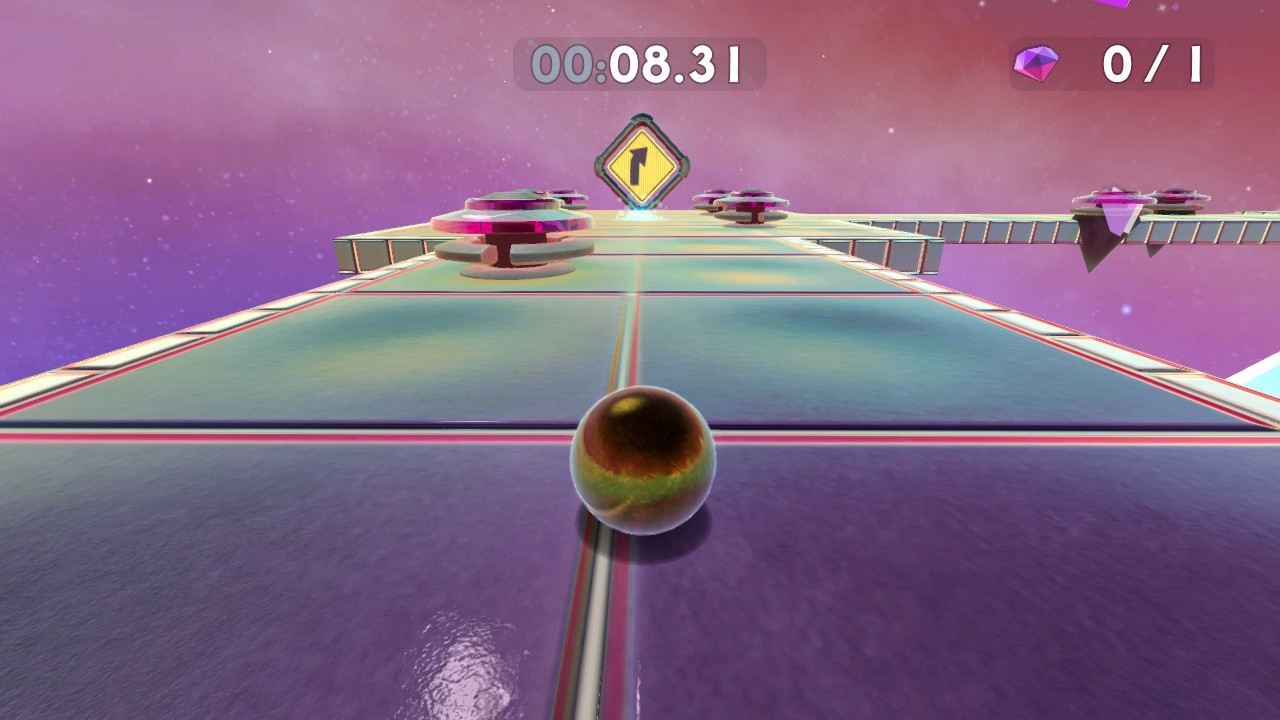 Playing with marbles as a kid is something that many people have memories of, although nowadays it’s not as common. Some games aim to bring toys from the past back in video game form, even if they aren’t being used for their original purpose. Marble It Up has players take control of a marble as they navigate a variety of levels as they attempt to reach a goal. It’s far from the old school game of marbles, but that isn’t necessarily a bad thing.

Marble It Up revolves around guiding a marble through 40 levels with one goal: reach the end. You either need to make your way to a lit-up goal as fast as possible, or you need to collect a certain number of gems before the goal will light up, allowing you to move on. It’s a simple concept, but the level designs add to the challenge. For example, you may be rolling and sliding down icy slopes as you try not to fall off the edges, or you need to jump gaps to reach other platforms.

The gameplay is simple, with your controls being rolling, jumping, and using special abilities. You can roll in any direction, which is helpful when trying to traverse narrow pathways or ledges. Times like this require a slow and steady pace, while other sections allow you to go fast and experiment with the speed. The special abilities come from pickups that may be scattered around the levels. The super jump and speed boost can be saved for whenever you want to use them, but the time slowdown activates instantly. The super jump is an arrow pointing up, the speed boost is a lightning bolt, and the time slowdown is a pause button. If you have one of the specials saved but pick up a different one, the first one is replaced by the new one. Unfortunately you can’t stack these powers, so if you have a super jump and really want to use it, be wary of picking up the speed boost. On the other hand, hitting a time slowdown has no effect on the saved ability.

The levels themselves are beautifully designed and they all feel unique. Even the simpler levels have a charm that leaves you wanting to bask in their design as you play. The levels are colorful and even the space-like void levels are a sight to behold. This comes into play even more with the gravity altering floors. There are some black floors that change the gravity and make it so your marble orients to whatever angle the floors are at. Once you’re newly oriented and the camera changes accordingly, you should be free to move with this new center of gravity. If you roll down one of these paths, you could end up moving on the wall of the platform you started on, or you could defy physics as you traverse up a big loop. These areas are really cool and make the gameplay even more fun. The graphics hold up incredibly well in docked mode and handheld mode, which was very impressive, especially with some of the fast paced action.

As mentioned before, there are 40 levels, but they don’t take long to beat. It took me about 1 1/2 hours to get through all 40, but that’s without me trying to get the best times on each level. Every level has times to beat that reward you with diamond, gold, silver, or bronze medals. Besides the pride of earning these medals, their only other use is to help unlock certain marble skins. There are a good chunk of skins that can be unlocked by doing things like earning all gold medals in certain chapters, or even just making it through a chapter in general. I used the brass design for awhile, but the caramel apple one became my favorite once I unlocked it. Some others include zebra, slime, and smiley.

As of the time of writing this review, the single player mode was the only one available, but the developers have already announced that a multiplayer mode and level editor are both in the works. These updates will be free and should add more replay value, which I think the game deserves. We’ve already seen how level editors can drastically increase the playtime of games, so why wouldn’t it work here? Gamers love to create their own challenging tracks to complete and then release them into the world. This offers more challenging gameplay for the gamers who love to test their skills and succeed in tough levels. So in the end, it’s a win-win. These features aren’t out just yet, but it’s important to mention them here so anyone interested knows what to look forward to. Even as it is, Marble It Up is a fun little game that is worth the time, although in it’s current state, I’m not sure if $19.99 seems worth it for everyone. I still think it’s worth a try, so make sure to check it out if it sounds up your alley, and get ready to rock and roll.

Marble It Up is a cool racing platformer that lives in the realm of games like Super Monkey Ball. The controls are quick to learn and the gameplay is simple yet satisfying. The visuals and level designs are wonderful and no two levels look the same. Unfortunately the game doesn't take long to beat, but it's still worth the ride.

Codi loves to play video games and watch movies. He will watch almost any kind of movie just to experience them. His ideas take inspiration from the shows and movies he watches, and games he plays. He also loves a good pun.
Related Articles: Marble It Up
Share
Tweet
Share
Submit