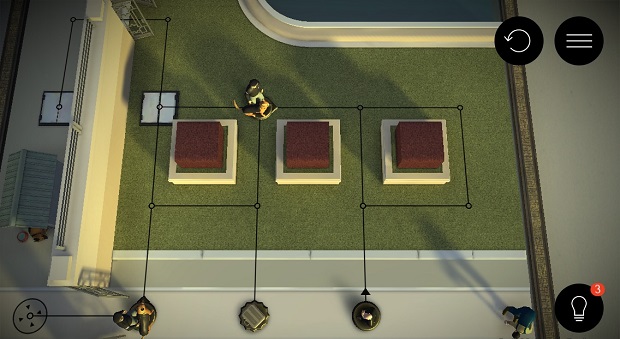 The Hitman games have been headed in a logical direction over the past few years. A simple stealth-em-up formula that has been, for the most part, working. Then a game like Hitman GO comes out and changes the playing field entirely. It was a risky swing, but Hitman GO knocks it out of the park, and makes it look easy.

Hitman GO takes the fast-paced stealth-and-shoot world of the series and scales it down to a board game. Predetermined paths are laid out on the board and enemies are replaced by pieces. Your goal is to navigate through the dangerous puzzles of guards that each have different methods for hunting down Agent 47. Each enemy is marked clearly by distinctive figurines.

Hitman GO features several stages, each containing 15 levels. Each stage is very aesthetically different than the last which lends visual variety to the game, something so many mobile games lack. You’ll go through a sunny resort, a nighttime ball, and even a reimagining of the opera level from Hitman: Blood Money.

Along with a change of setting, new stages add new mechanics, such as disguises, new guards, and more tricks for Agent 47 to employ. Just when you think you’ve perfected your technique, Hitman GO throws something unexpected into the mix to challenge players.

The game’s simple set of rules lends itself to complex gameplay that unfolds before the player completely organically from start to finish. You won’t find a single forced tutorial in Square Enix Montreal’s meticulously planned hit of a game.

The only thing lacking in Hitman GO is more. I was able to beat the game in a few extended sittings and go back and complete almost every bonus objective in a few more. The game promises new levels in the future, but so far no date or price point has been set.

Hitman GO is genuinely novel while still holding true to the Hitman brand. The clean aesthetic and beautiful sound design make it so that you never forget what world you're in. Add in fun and addictive puzzles and you've got a near perfect mobile experience. I might just have to rethink what a Hitman game is after playing Hitman GO.