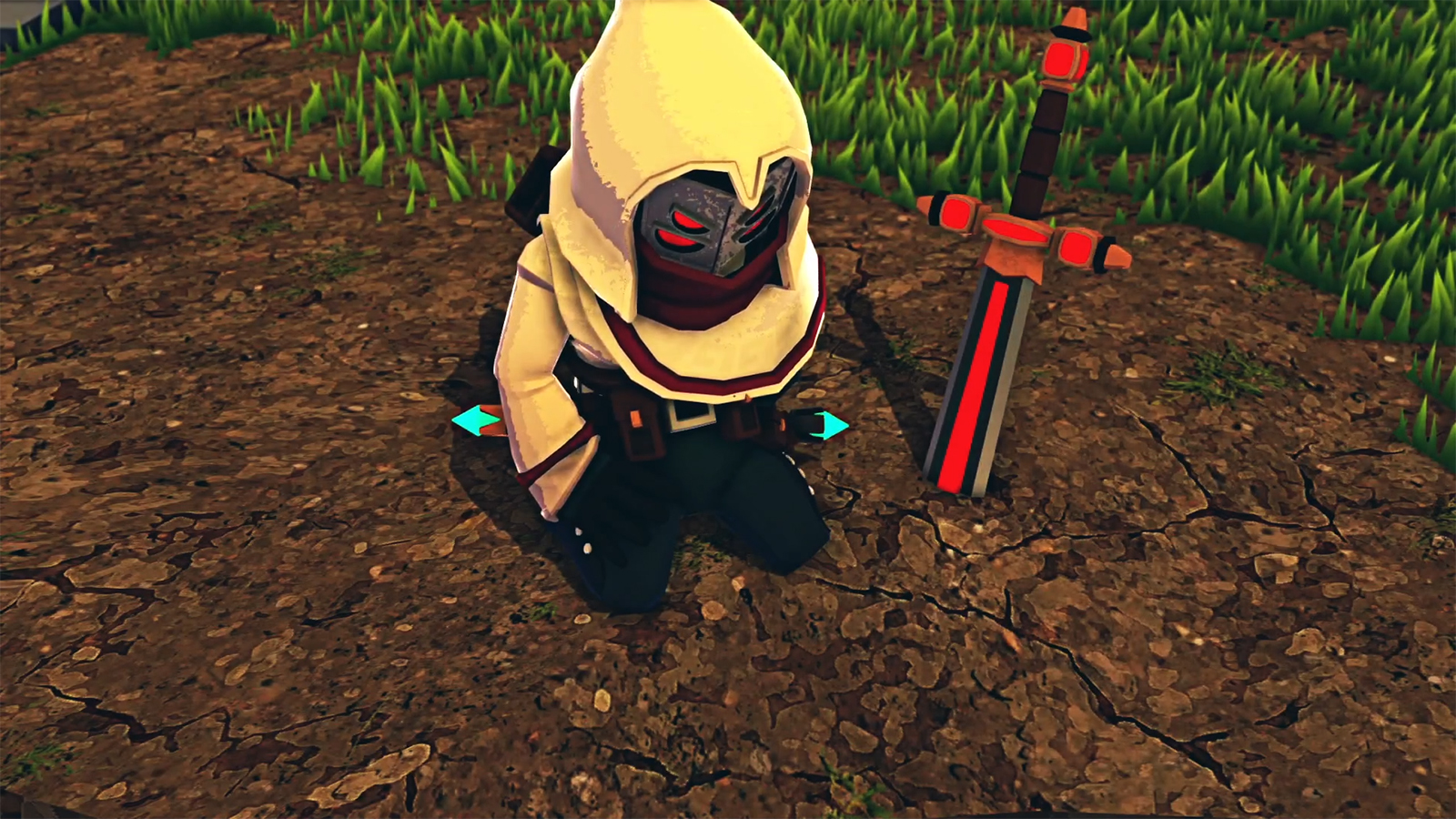 There’s a difference between choices that change an outcome and choices we care about. The choices we care about are the ones that matter. Hindsight 20/20: Wrath of Raakshasa completely misses that distinction. It’s an action-adventure, choice-driven driven RPG that constantly presents high-stakes situations to make you think you’re making decisions that matter, but they don’t because you have no reason to care about the people, the world, the main character, and consequently, the choices. Multiple endings give an intriguing reason to keep playing but the destination cannot bear the weight of unnatural and contrived consequences, monotonous and nonsensical combat, and an overall awful presentation.

You follow Jehan, a warrior who fled his hometown and has returned to right his wrongs. But the city is struggling with a disease that turns people into bloodthirsty creatures known as Raakshasa; and since there’s a staunch no-killing policy, the people don’t know what to do because, apparently, killing the infected is all most can think of. The story sounds like it should be loaded with varying opinions on how to deal with the infected but the choices are binary and you see this at the beginning of the game. A woman says your best friend has been infected and thinks you should rescue him, but he’s guarded by the person who killed your father. You have two options: save your best friend or decide you’re not ready to face your father’s killer. Choose the latter option and you trigger a game-ending sequence and the woman is heartbroken that you could be so cruel to your best friend. There’s no consideration of Jehan’s grief. Choices like these occur throughout Hindsight and remove or simplify the humanity of most of the characters and choices.

Many of the consequences also feel unnatural or contrived. In a fight with the Sheriff to save your best friend, if the fight takes too long, your best friend will take their life during the battle. Sounds like something that could happen, but I didn’t know he was suicidal. Had I known, I wouldn’t have fought the Sheriff. It’s a confusing outcome in a game that’s supposed to be about how your choices lead to natural consequences. Unexpected tragedies occur in real life, but Hindsight is built on repeated unnatural consequences which trivialize every choice you make.

Hindsight 2020: Wrath of Raakshasa review - Hindsight would help this game

A lot of choices don’t make sense and corner you into picking the “correct” option, further stripping the impact of your choices. For example, the woman you met who told you about your best friend has her own plight. After she tells you about it, one of your options is to ask “Who are you?” as if you’ve never seen her before, and her response is just as confused. These options only increased my emotional disconnect with the characters I wasn’t connected with in the first place.

Part of this disconnect comes from the characters feeling like strangers. I didn’t feel a connection to any of them. Plot development is next to nothing. I don’t know who my father is. I don’t know people who say I’m their friend. I don’t know who I am! You’re presented with tragic scenarios as if that’s supposed to be sufficient enough to connect you emotionally to a person. We mentioned suicide. Feel bad. We mentioned a dying wife. Be sad. But I don’t care because there’s no character development or backstory to help me identify with their pain. Many of the characters signpost the consequence for you as if the developers are trying to convince you that your one choice is the reason why some tragic thing happened. It’s a lousy tactic that cheapens the consequences.

The draw of Hindsight is the ability to go back in time and change outcomes to unlock different endings, but I gave up after finding four. Even though I could finish in two hours on subsequent runs (first run took me 5 hours) it became unbearable to slog through the boring levels. The dungeons alternate between rooms with enemies and solving ridiculously easy and annoying block puzzles. The puzzles, if you can call them that, do nothing but act as roadblocks. You can solve all of them in less than 30 seconds just by observing the patterns. At times, it made me wonder if Hindsight was actually made for kids. But that thought quickly went away once combat kicked in. 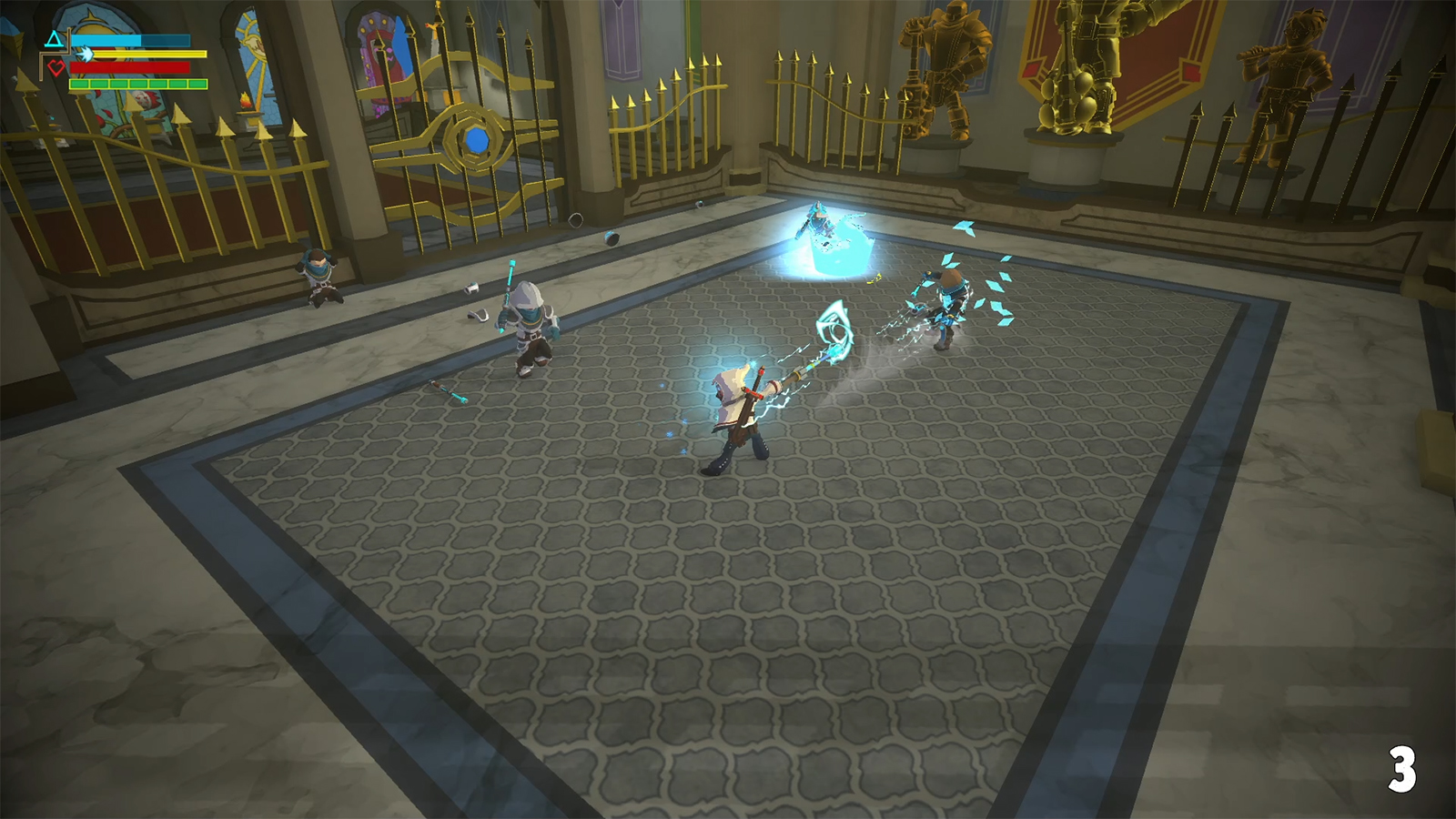 You have to engage in a lot of awful, repetitive combat. You have a sword for lethal, and rather bloody, combat and a stun baton for non-lethal combat. Which one you use decides how citizens and enemies react to you, but they’re merely vehicles for advancing the binary choices and strange outcomes that follow. The combat is absurd. You can’t damage enemies except on the third or sixth consecutive hit. You’re forced to chain attacks in order to reach that third or sixth hit. Otherwise, you’re endlessly poking or slashing at the same enemy. Certain specials completely undermine the combat; two, in particular, that annihilate everything: a stun baton special that one hits anything you touch, and a sword special that allows you to throw it and it homes in on enemies. Plus, once I became great at knocking the yellow orbs out of enemies, combat became just activating my special and decimating everything just to get through the game faster. Going through that and not finding a new ending feels like a waste of time.

The presentation surrounding the choice-driven gameplay doesn’t do Hindsight any favors, either. Executions are cool in concept but don’t look cool in practice; hallways are littered with oddly placed obstacles that fail to succeed as deterrents or navigational puzzles (you can run around most). On higher difficulties, enemies don’t take more damage, change combat strategies, or attack faster; they just deal more damage, and once you figure out all the attacks, they’re easy to avoid unless you’re being careless. The bigger enemies are the silliest. All you do is wait, dash, strike. You might have to reflect a projectile back, dash a bit more, or wait a little longer, but it doesn’t get more interesting than that. Raakshasa and bosses bring a bit more challenge, but you won’t have to change your battle strategy to beat them.

Hindsight 20/20: Wrath of Raakshasa tries to convince you that your choices matter and that you should feel bad about some choices and good about others, but they don’t matter because you don’t connect with the characters or the world they inhabit. Your choices change outcomes, but many of them feel unnatural or contrived, and most are signposted making it feel like the game is trying to tell you that choices matter rather than letting you experience the impact. Tack on an awful presentation and bland combat and you have the recipe for a game that ultimately doesn’t matter.

Hindsight 20/20: Wrath of Raakshasa tries to convince you that your choices matter and that you should feel bad about some choices and good about others, but they don't matter because you don’t connect with the characters or the world they inhabit. Your choices change outcomes, but many of them feel unnatural or contrived, and most are signposted making it feel like the game is trying to tell you that choices matter rather than letting you experience the impact. Tack on an awful presentation and bland combat and you have the recipe for a game that ultimately doesn’t matter.

Anthony Shelton started his journey in games media reading Nintendo Power, writing mock reviews, and writing E3 exposes. For fun. He grew up in the arcades playing with strangers and friends, and in the garage with his Commodore 64. He loves playing co-op and multiplayer games, but has no problem crushing your soul in any competitive game he enjoys.
Related Articles: Hindsight 20/20: Wrath of Raakshasa
Share
Tweet
Share
Submit