Did you know that 80% of the world’s animals are insects? Neither did I until I was graced with this random fact while playing Bug Academy on Switch. It makes sense in retrospect, but you never really think about it. Even so, the little bug facts in-between levels are a treat and actually teach you things. It’s a nice way to make use of the loading screen. Last year I did a preview on PC for a quirky little Kickstarter game called Bug Academy, but now it’s made its way to the Nintendo Switch. After all this time, I can finally get a look at what the full game has to offer. With quirky physics, goofy tasks, and a colorful, cartoony aesthetic, Bug Academy lets you take control of several types of insects in the pursuit of unusual goals.

Bug Academy is broken down into four different classes, with each class focusing on a different type of insect: flies, fireflies, mosquitoes, and bumblebees. Each class contains seven lessons that start at a tutorial and continue on to other nonsensical tasks. All four bugs have the ability to grab objects and carry them around, but since they have different gameplay mechanics to them, the levels contained in their respective classes involve different activities (more on that later). You start off as the traditional fly, but as you complete fly levels, you’ll unlock access to the firefly levels. The pattern continues for the other two bugs as well. In every level you start off as a single bug, but there are sleeping friends scattered around the level. Get close to them to wake them and have them join your swarm. The more bugs you have, the easier it’ll be to lift objects and the faster you’ll be able to travel while carrying said objects. To be clear, gathering a swarm is very helpful and important. 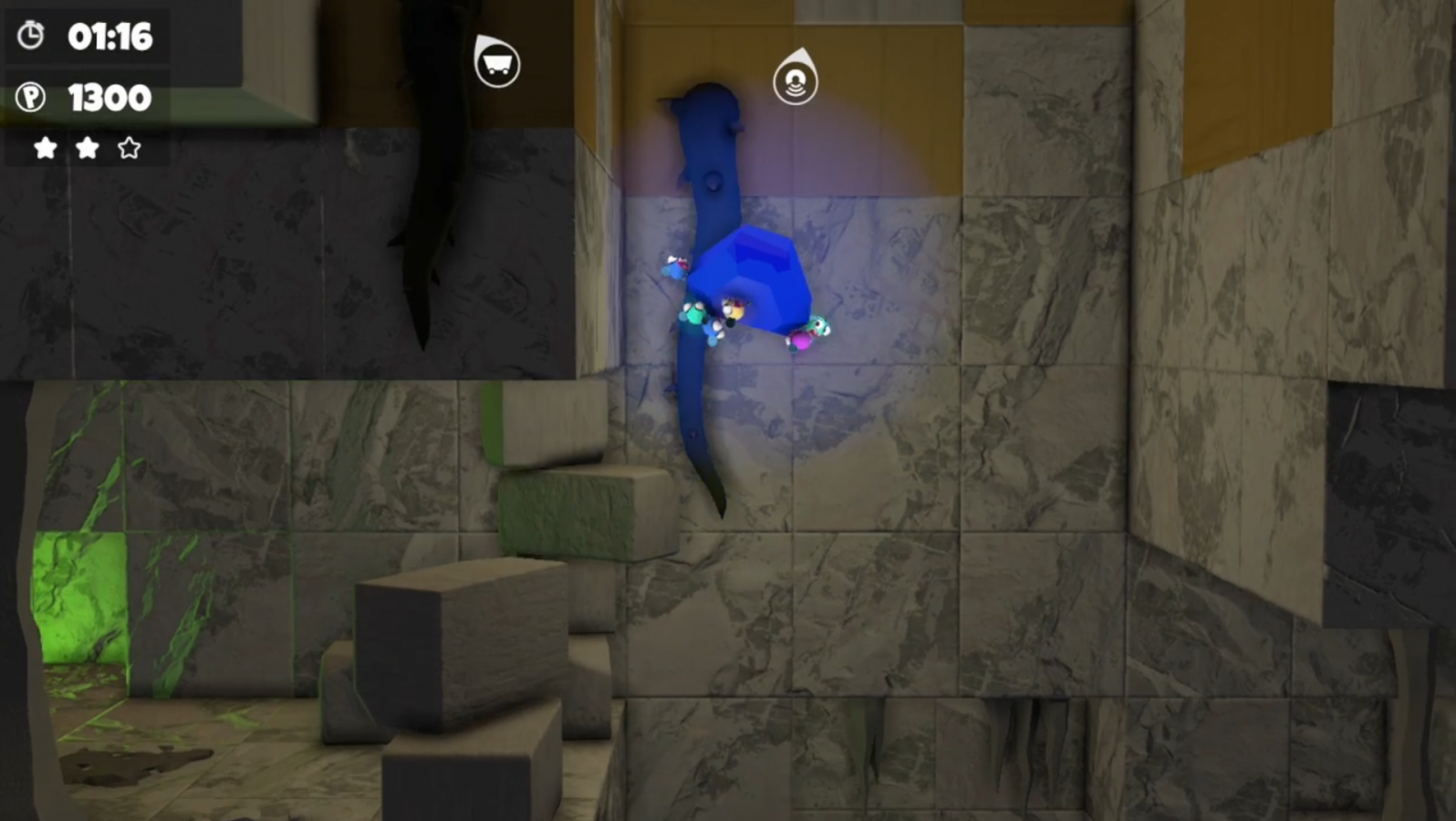 The flies are the standard bug with no special ability, but they act as a great introduction to the game. The fly levels include tasks such as carrying escaped cows back to their pen and blocking them in with random objects, building a tower of building blocks as high as possible, delivering fridges to various houses, and so on. Fireflies help you see better in the dark, but other than that they aren’t that different than the standard flies. Fireflies get to perform tasks such as searching for gems in mines, robbing a museum, etc. Yes, you heard right. You sneak into a museum past cow security guards and attempt to steal a large gem. It’s ridiculous, but man is it funny to watch.

The mosquitoes get their trademark quality of being able to suck up liquids. The two liquids available are water and hot sauce. The hot sauce is an unexpected yet hilarious choice; spitting out the hot sauce acts as a booster that makes your mosquito fly faster. This comes in handy because their levels involve tasks like racing through an area as fast as possible or trying to launch a rocket into space. As for the water, that’s used for putting out fires in multiple levels. The mosquitoes are more fun to play than the flies and fireflies, although the bumblebees are my favorite. The bees allow you to slow time for a few seconds as you aim one of the bees at a target. If you’re a single bee, then you’re sadly out of luck; you need to collect more bees to fire at targets. The bee levels include defending areas from cow attackers, popping balloons to drop cows and take them to their pen, and so on. It adds more to do than just carrying and moving objects, even though transporting objects is still fun. 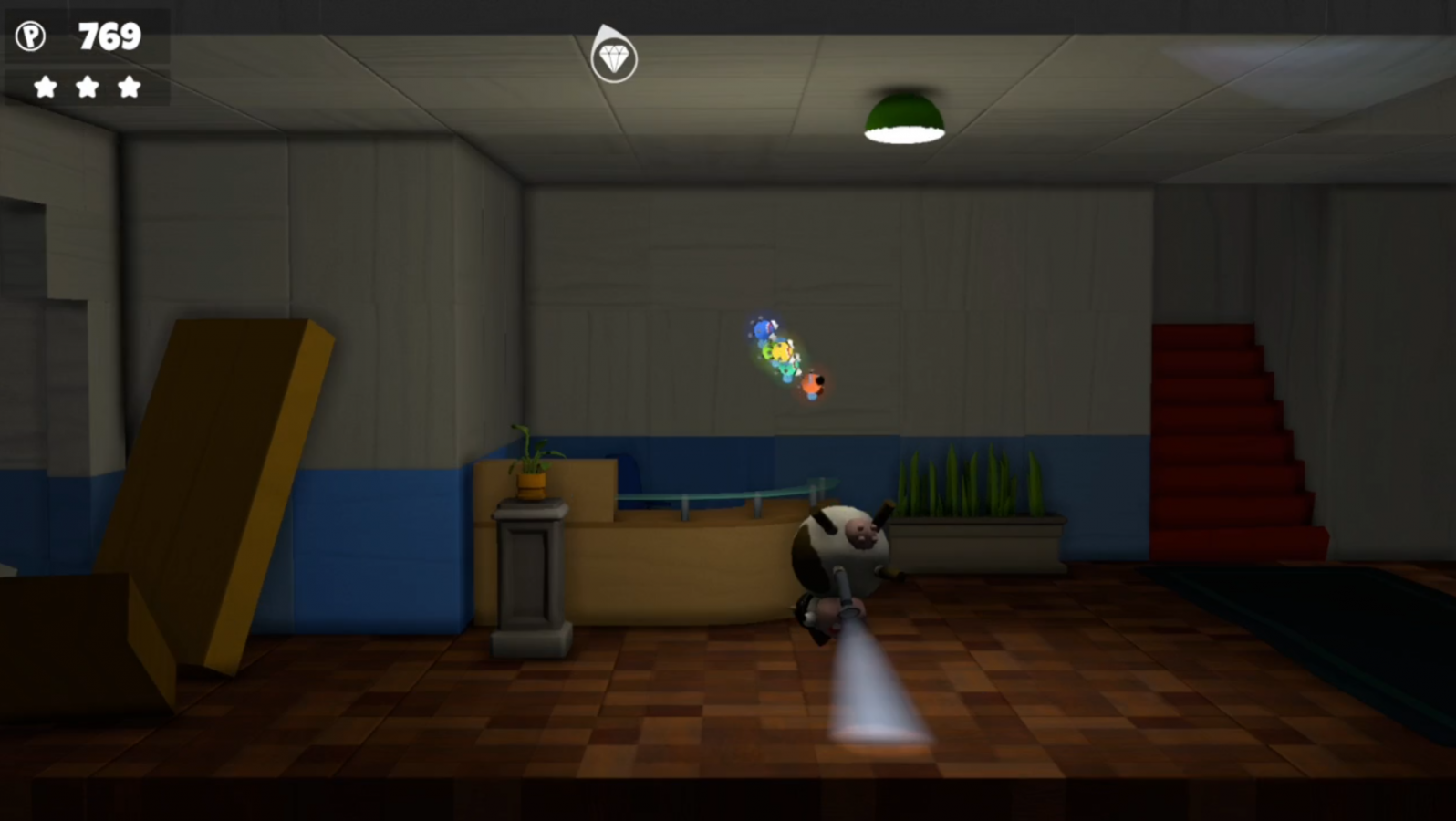 After you’ve done all of the previous levels, there’s a final exam that’s much different than the rest of the game. I don’t want to spoil the exact events of the exam, but I’ll say that it’s one long level split into four different segments. Each segment involves one of the four bugs contributing to one grand goal. I didn’t expect this sort of ending to the game, but I have to admit that it’s pretty clever. The game is testing how well you can handle each of the four bugs you’ve learned from in an entertaining way. With a game like this, there’s no better way it could’ve ended.

As with many games there’s a rating system to show how well you performed in levels. You can get bronze, silver, or gold stars depending on how well you do. Besides the glory of knowing you did really well, there’s actually some other benefits to getting gold stars. There’s a gift shop that is essentially a section that contains all the unlockable hats you’ve obtained. You unlock hats by collecting a specified number of stars, and you equip a hat by pressing the button under the pedestal. The hats are purely cosmetic, but I loved putting my rubber duck hat on after I unlocked it. If you manage to get gold stars on every level, including the final exam, then you unlock the X class. This revolves around a swarm, but I’ve unfortunately been unable to get all the gold stars myself, so I haven’t been able to test out the swarm class. That being said, it takes some effort to reach because you need all 87 stars in the game to play it. 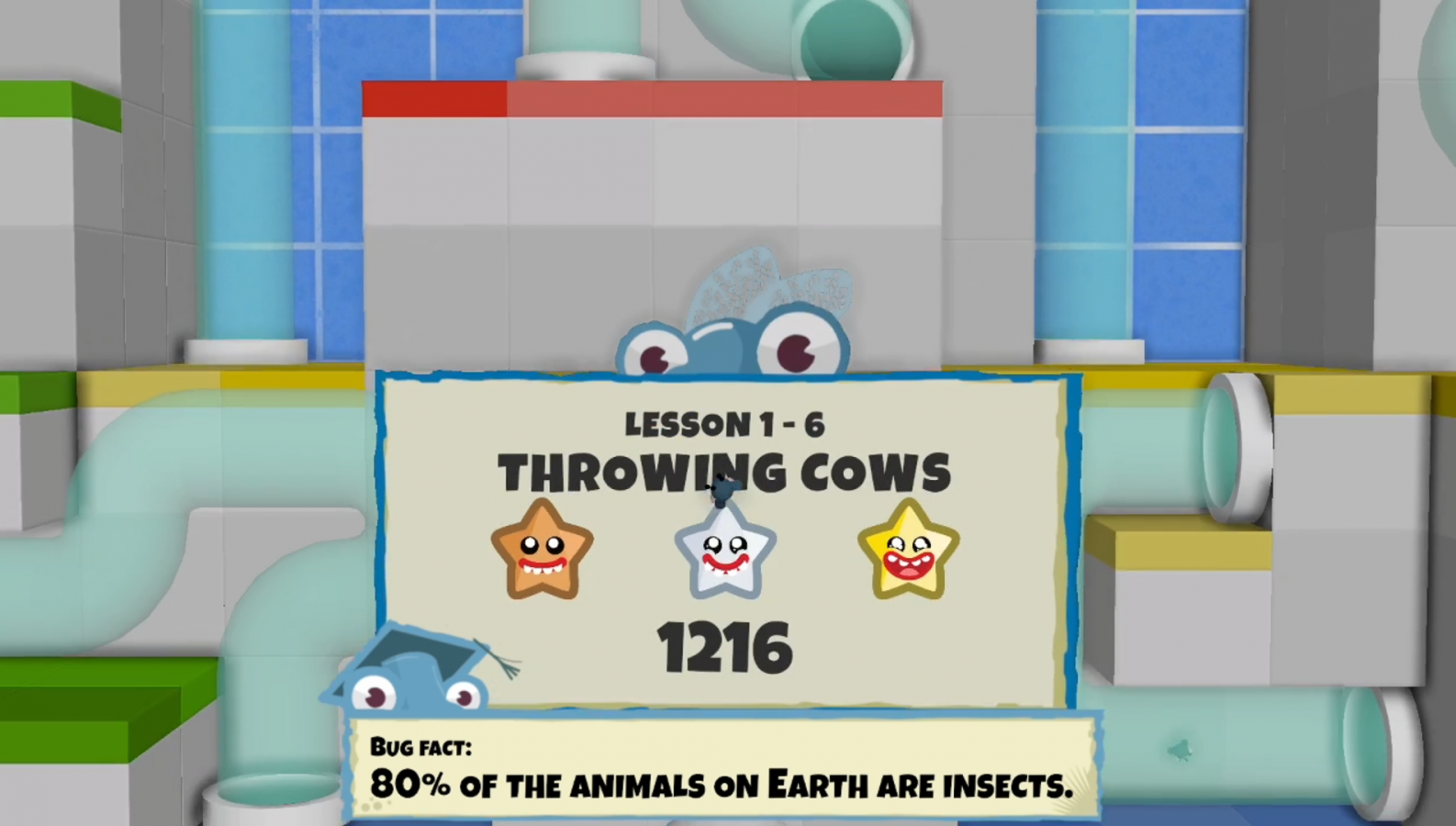 The gameplay itself features wonky physics, which may be annoying to some, but I think it’s part of the fun. It adds some extra challenge to your tasks, but come on, did you really think that bugs would have an easy time doing anything I’ve mentioned previously? I didn’t think so. Visually, the game is cartoony and goofy, but that makes it charming to play and endearing to look at. The only downside is that the game only takes a few hours to beat, so keep that in mind. Even so, those few hours were a treat that I’m glad I got to experience. At $12.99, it’s not a bad price for a couple hours of gaming, especially if you’re a completionist that wants to earn all 87 stars. If you want to learn from the bugs, enroll at Bug Academy, but if not, it’ll be there if you ever change your mind.

Bug Academy is a goofy game where you control four types of bugs in pursuit of wacky goals such as tossing cows, putting out fires, and much more. With a cartoony aesthetic and wonky controls, you're in for an insect filled treat. It doesn't last very long, but it's worth it.

Codi loves to play video games and watch movies. He will watch almost any kind of movie just to experience them. His ideas take inspiration from the shows and movies he watches, and games he plays. He also loves a good pun.
Related Articles: Bug Academy
Share
Tweet
Share
Submit