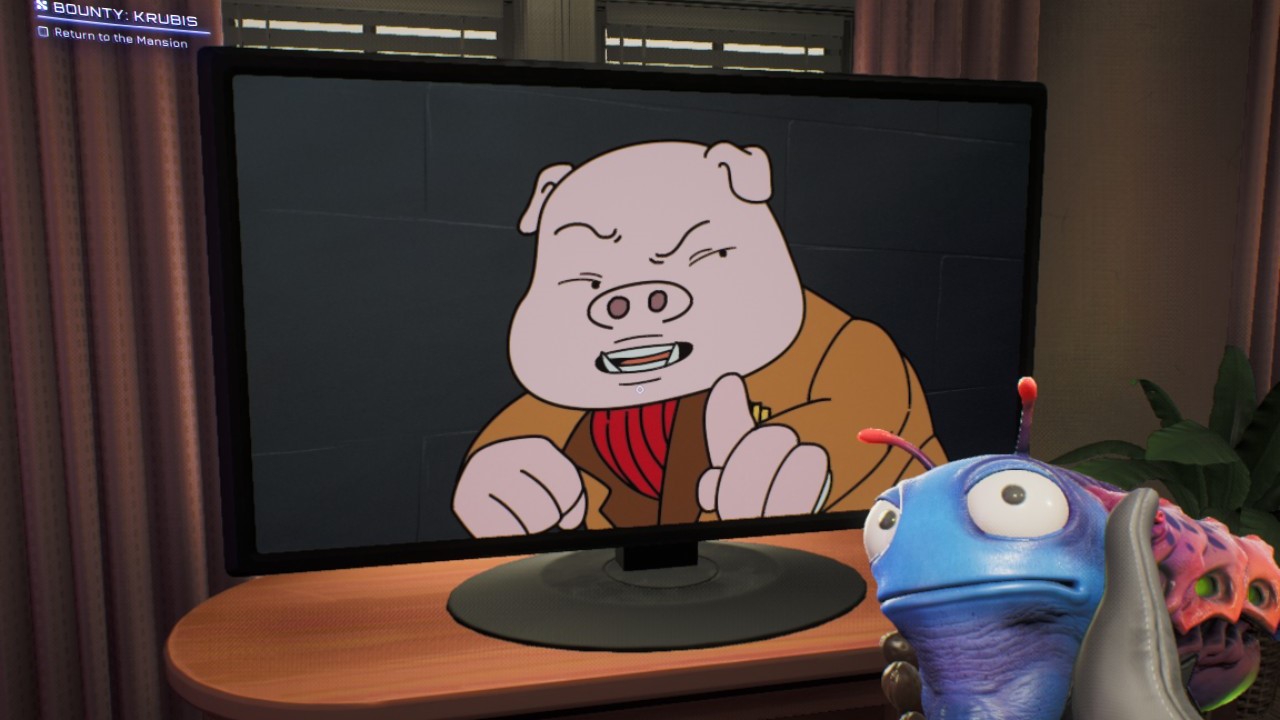 You’re just out of high school with no prospects or ambition when aliens invade Earth. Thanks to a sentient gun named Kenny, you get off planet and discover your true calling: murder. The extraterrestrials who took over Earth are part of the G3 cartel and are using humans as drugs, so as a newly equipped bounty hunter, you take the fight to them across the galaxy.

High on Life is the latest title from Squanch Games, creators of comedy games like Trover Saves the Universe and Accounting +. You may also know the studio as the one where that guy (Justin Roiland) who made Rick and Morty makes games. Their humor isn’t for everyone, using lots of gross out gags and general awkwardness with something of a mean spin, but I did enjoy the first two or so seasons of Rick and Morty so I figured I’d give this a shot. Unlike Trover, this is not a VR game but instead a more traditional first person shooter, so let’s see if it can stand on its own.

The core concept of High on Life is your sentient, talking guns called Gatlians. You befriend a total of six throughout the game, each with a different personality and use in combat. Excluding your melee weapon Knifey, every Gatlian has a primary fire, secondary use, and a trick shot. Kenny (voiced by Justin Roiland) is your standard pistol, with the ability to aim down sights, and his trick shot fires a glob of green goo which launches enemies in the air for you to juggle with more bullets. Gus (J.B. Smoove) is a shotgun who can suck enemies closer and fire a saw blade that bounces between enemies. Sweezy (Betsy Sodaro) is a semi-automatic pistol who fires crystals that explode if you melee an enemy or shoot them with her slow-to-charge piercing shot. Her trick is to fire a time bubble which slows down enemies and objects and will expand when shot. I won’t spoil the final gun, so the last we’ll talk about is Creature (Tim Robinson), who is essentially a grenade launcher but the grenades are his children which seek out and deal damage over time to enemies. His alt fire simply gives you a visualization of the arc his babies will fire in, but his trick shot allows a special baby to mind control a foe for a short period of time.

This is a surprisingly versatile arsenal for a game more focused on comedy, and each of them have their use in battle along with having some decent quips. They’re far from perfect, however. For example, Gus’s primary and secondary fire just aren’t very useful, with a very small spread for shotgun pellets and low damage to boot. (He also just doesn’t feel satisfying to use, with weak sound effects and feedback.) In contrast, his trick shot is one of the best in the game, usually bouncing between three to four baddies before coming back to you and allowing you to melee it for even more bounces. Gus is probably the most flawed of the bunch gameplay wise (even though I adore J.B. Smoove), but Creature’s underwhelming kit had me only bring him out occasionally as well to fire off a few babies. They all have their uses, but feel a bit unbalanced in just how useful they are in a fight. 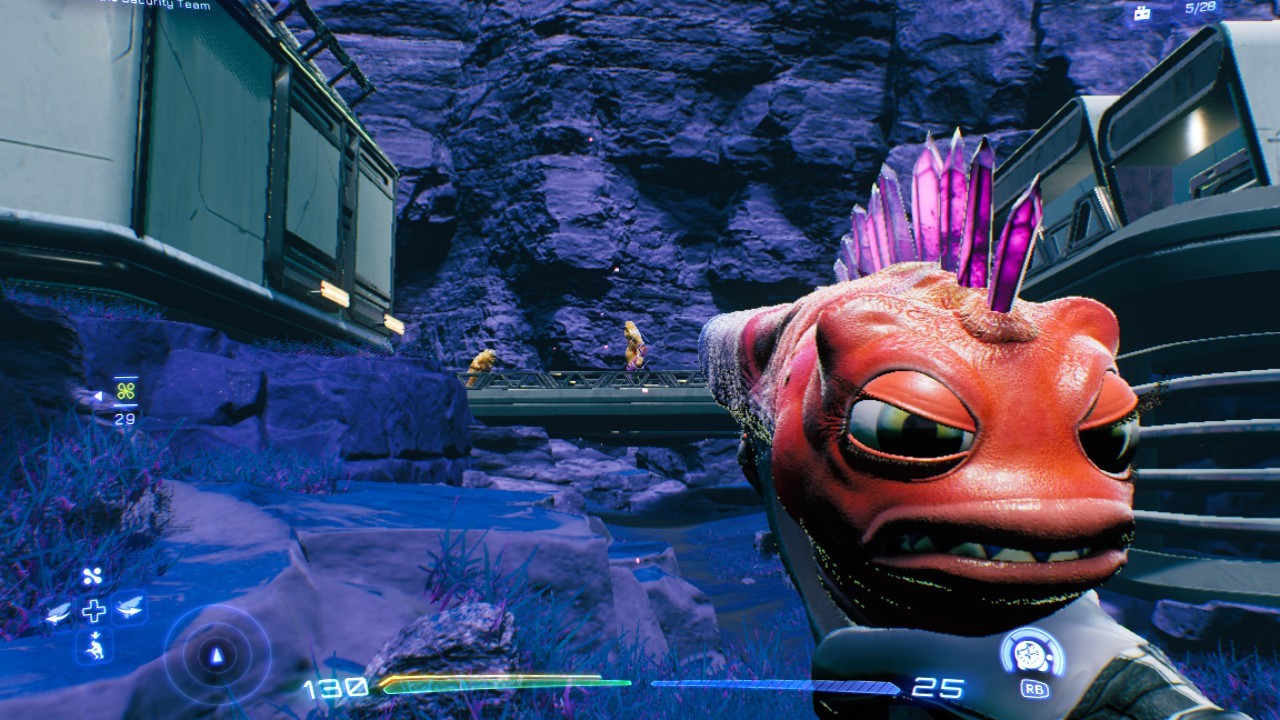 Sweezy is probably my favorite of the bunch, and I’m not just saying that because she told me to. Because you’re very mobile and die extremely quickly, her close up and aggressive kit simply feels great to use. My favorite moments in the game were ones where I would power slide into a bunch of enemies, unload a full clip while dashing and jetpacking around, then go in for the kill with an explosive melee attack. There are a lot of gags poking fun at how you’re weirdly good at murder for a kid who’s never held a gun before, and I think the game would have benefited from leaning into that playstyle much more.

As it is, your arsenal just kind of feels disconnected both from each other and how the game wants you to play. Once I got Kenny’s Glob Shot, I was excited to see how I could combine that launcher with other guns’ moves, like launching a tough G3 goon, swapping to Sweezy for a time bubble to keep them in the air longer, then calling on Creature to swarm them with airborne babies, but you really can’t do that, or at least it’s not encouraged. The animation for swapping weapons takes a little too long and most of the time if you try and get a combo going it simply won’t work. It seems like effort was put into things that don’t really matter, like picking your character’s gender and appearance at the start of the game even though you only see your hands without a suit for a total of 10 minutes. 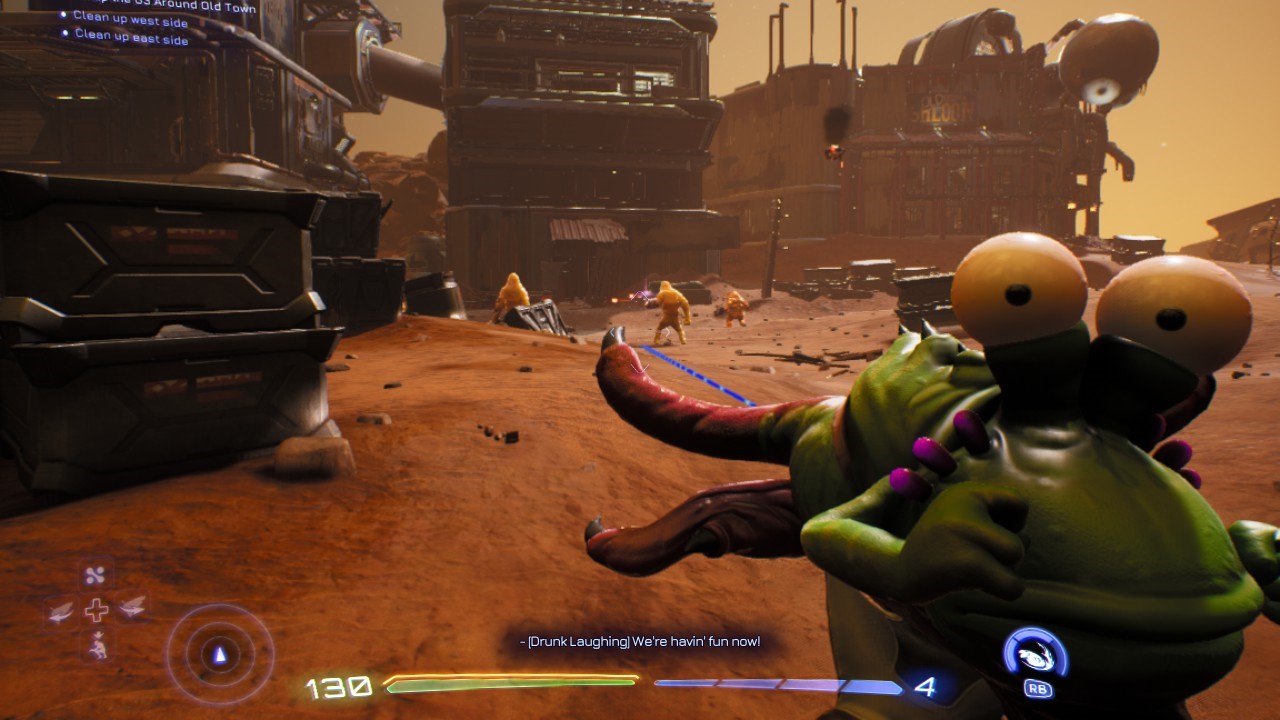 I played the game on Normal and found it surprisingly challenging, but not for the right reasons. The narrow field of view makes it difficult to see when enemies are shooting you just off screen, which can have you go from full health and shields to dead in a few seconds. Again, the game seems to want you to play aggressively with constant movement, but pretty much all of your decent movement options are limited by a pitifully small fuel meter which will leave you a sitting duck while it takes a second to recharge. I don’t really see the point to this being limited outside of hovering with the jetpack either. It’s like punishing the player for trying to have fun.

While it’s very flawed, the combat is still very enjoyable. That aggressive, in your face playstyle has been coming back with games like DOOM and Ultrakill and it’s by far my favorite way to play shooters, rip and tear until it’s done as they say. I do find Roiland’s humor to be mostly hit or miss these days, especially the gross out stuff, but there’s some great jokes here like an optional movie theater you can go to that has an entire film called Demon Wind (which has some nudity in it?!?! Pretty sure the game is rated M, but that was weird) with the Red Letter Media guys riffing on it. I did watch the whole thing simply for the absurdity of it, even if the riffing wasn’t to my taste. 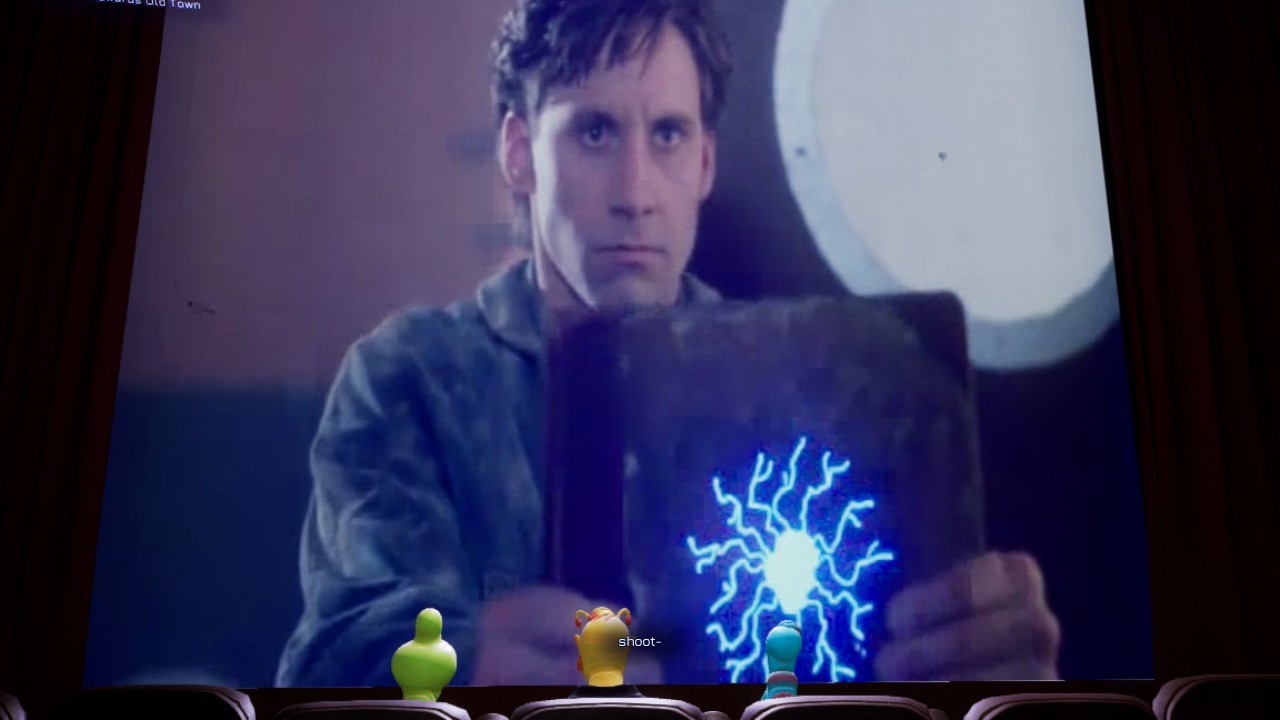 When the humor is paired with actual sincerity is when it works the best, though. This only happens in the last two hours of the game, but it contains the funnest and most memorable segments by far, like you and Kenny having a heart to heart in a Space Applebees (yes that’s the actual name) while the waiter keeps interrupting to bring you your order. Throughout the game, you also take sides in arguments between your sister Lizzie and your pseudo mentor Gene. I had assumed this was leading up to a split in the story, with whoever you side with the most being the one you go with later, but it doesn’t actually matter. Regardless, I sided with Lizzie each time because she was right almost every time. The two will either thank you for siding with them or berate you for not doing so after the argument, except it doesn’t actually matter since, despite always siding with Lizzie, she got mad at me for not doing so after one cutscene in what I can only assume is a bug or oversight.

I played High on Life entirely on Steam Deck, though not entirely out of choice. For whatever reason, the game doesn’t support cloud saves, so after playing an hour or two on deck while waiting for my PC to download the game I was surprised to see I would have to start over there. I don’t see why they wouldn’t support cloud saves when most indie games do these days, but I did enjoy playing the game on Deck. I find the gamepad controls to be more intuitive than the default Keyboard and Mouse setup, and it runs decently too. I could get around 30-40 fps on medium to high settings and up to 60 on low. I did end up settling for a more consistent 40 with low settings which worked just fine. While I miss some of the effects with higher settings, I think the art style still shines through. It’s great for portable play too, with short missions that total up to a 9 hour run time – just don’t play it in public without headphones. It’s not that the music or voice acting are particularly standout, I just wouldn’t want other people to be surprised by the… let’s say low brow humor.

High on Life is a decent enough game that doesn’t quite live up to its potential. The combat feels unfocused and lacks depth, while the story and humor only hit their stride in the final moments. Still, it’s worth a playthrough if you enjoy the more aggressive side of shooters with some light platforming.

David is the kind of person to wear his heart on his sleeve. He can find positives in anything, like this is a person who loved Star Fox Zero to death. You’ll see him playing all kinds of games: AAAs, Indies, game jam games, games of all genres, and writing about them! Here. On this website. When not writing or playing games, you can find David making music, games, or enjoying a good book. David’s favorite games include NieR: Automata, Mother 3, and Gravity Rush.
Related Articles: High on Life, Indies
Share
Tweet
Share
Submit