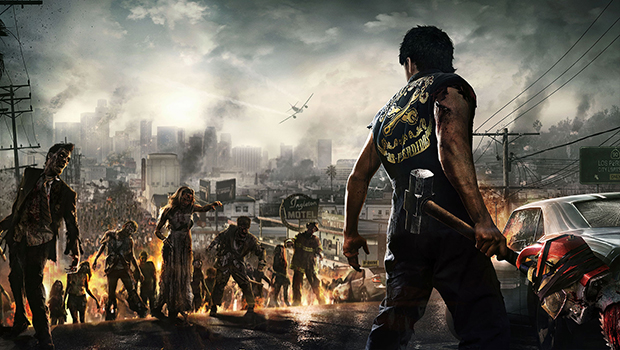 Dead Rising 3 Apocalypse Edition is stupid, bloody fun in the most sincere way. It is a great game that revolves around slaying hordes of zombies with ridiculous weapons, while wearing even more ludicrous costumes. The Dead Rising games have always been a parody of the zombie genre and push the limits on how absurd it can make the end of the world, and the third official sequel is no different. Released November 22nd of 2013 Dead Rising 3 was an Xbox One exclusive, but now re-releasing with all 4 Los Perdidos DLC, higher resolutions and updated textures, is the Apocalypse Edition worth revisiting on PC?

One of the biggest improvements I noticed over the Xbox one version of Dead Rising 3 was the improved graphics. It looked beautiful being able to run at 1080p and the improved textures on the characters, backgrounds, and objects were noticeable. Now this isn’t the greatest looking game ever, but it actually surprised me how nice and crisp it looked compared to the Xbox One version. The texture pop-ups are still present here and there however, and weird glitches that made cars start bouncing around would randomly, but rarely occur. The amount of zombies on screen at once still manages to amaze me though, and ripping through them with a shotgun/sabre hybrid is so fulfilling. There are a decent number of zombie textures through the game so when you are slashing through them it doesn’t feel like your kill counter was filled by killing the same 10 basic zombies over and over. The game is capped at 30 frames per second, however a simple tweak can override that which I am baffled as to why it was not just included in the games options to turn it off.

The combat in Dead Rising 3 is satisfying and makes the game enjoyable from the first kill to the last. The bodies of the undead can be torn limb from limb and explode which make some weapons feel godlike. The guns handle very well and became a favorite weapon class of mine, which was a surprise since I was not a fan of guns in any of the previous Dead Rising installments. Killing multiple enemies and keeping a killstreak up will increase your PP which in turn will allow you to level up your character. As your level increases you can choose unlocks that have an immediate effect (more health, easier PP, carry more items) and although it was a simple upgrade system, I found it to be powerful and very useful.

Combo weapons and vehicles are truly the stars of Dead Rising 3. The weapons in the game make killing the thousands of zombies (when I finished the campaign my kill meter was just shy of 32,000) from getting stale. The map is littered with countless weapons that range from effective (shotguns, rifles, swords, bats) to useless (hangers, teddy bears, even vibrators) but finding blueprints hidden across the world allows you to combine the weapons into combo weapons that are powerful and fun. Everything from laser swords, electrified boxing gloves, and even a crossbow that shoots fireworks. The combo vehicles work the same as finding blueprints and combining vehicles around the world can create new and more powerful vehicles for your slaughtering needs. Mixed in are also costume pieces you can seek out and make the main protagonist look as ridiculous as you want. This game thrives on being stupid fun, and on that objective it fires on all cylinders.

One the other hand, one of the weakest parts of the game is the story. Yes it is creative and even unique, but it falls short for one major reason: it tries too hard to be taken seriously. The dialogue and emotion are forced and in a game that relies so heavily and being bloody, unforgiving, and immature the cut scenes felt so out of place. It was to figure out why my character was having a breakdown about killing another human and then immediately putting on a sombrero and killing hundreds of zombies with a lawnmower. The atmosphere of the actual game and the story and cutscenes almost felt as if they were two separate pieces, which was disappointing. Another shortcoming was the map. At first it felt large but I quickly realized the actual world was filled with roadblocks that I had to drive around to reach other destinations. This was obviously designed to make the world feel bigger than it actually is. After around 10 hours of in game play time the map started to feel repetitive as I drove back and forth around the same roadblocks to reach my objectives that always seemed to be conveniently placed on the opposite side of the town from each other.

Throughout Dead Rising 3 there are also numerous side missions to tackle. Most of these include helping out other survivors and saving them which will allow them to join you on missions and give you a hand (although I found out they just got in the way more rather than helping) There are also hidden blueprints and trophies that will unlock weapon or vehicle combos, or PP. My favorite however, is the psychopaths that are in the town. These are crazy characters that are usually gross, messed up, or otherwise oblivious to the fact that the world around them has completely turned into World War Z and for various reasons you have to kill them. They are over-the-top boss battles that usually contain some form of unique mechanic to the fight and really stood out against slaying thousands of thousands of brain-munching creatures. I wish there had been more to be honest, and I wish the story in the main missions were as crazy as these side missions because this is where the game became so weird, and yet so enjoyable and crazy.

The Co-op in Dead Rising 3 is a very well done and simple. You can drop into other people’s games seamlessly and start killing hordes of zombies alongside of them (or vice versa) and tackle missions together. I found it astonishing how downright fun it was to suddenly have another character in a miniskirt and welding mask show up and start slashing away at the undead next to me, or have them roll up to me in the midst of a horde and save me in one of the sweet combo vehicles. They can also leave the game just as easily making teaming up at times a random and unique surprise that I looked forward to.

Dead Rising 3 Apocalypse Edition is simply a fun game. Its story lacks and it has its fair share of downfalls but it is all worth it due to its unforgiving and humorous gameplay. If you don't have an Xbox One, this package includes all of the DLC as well as a few new graphical bells and whistles. Dead Rising 3 is truly a game that is its best when it isn’t trying, it is unapologetic and bloody, and one of the best zombie hack and slash games that has ever been released.