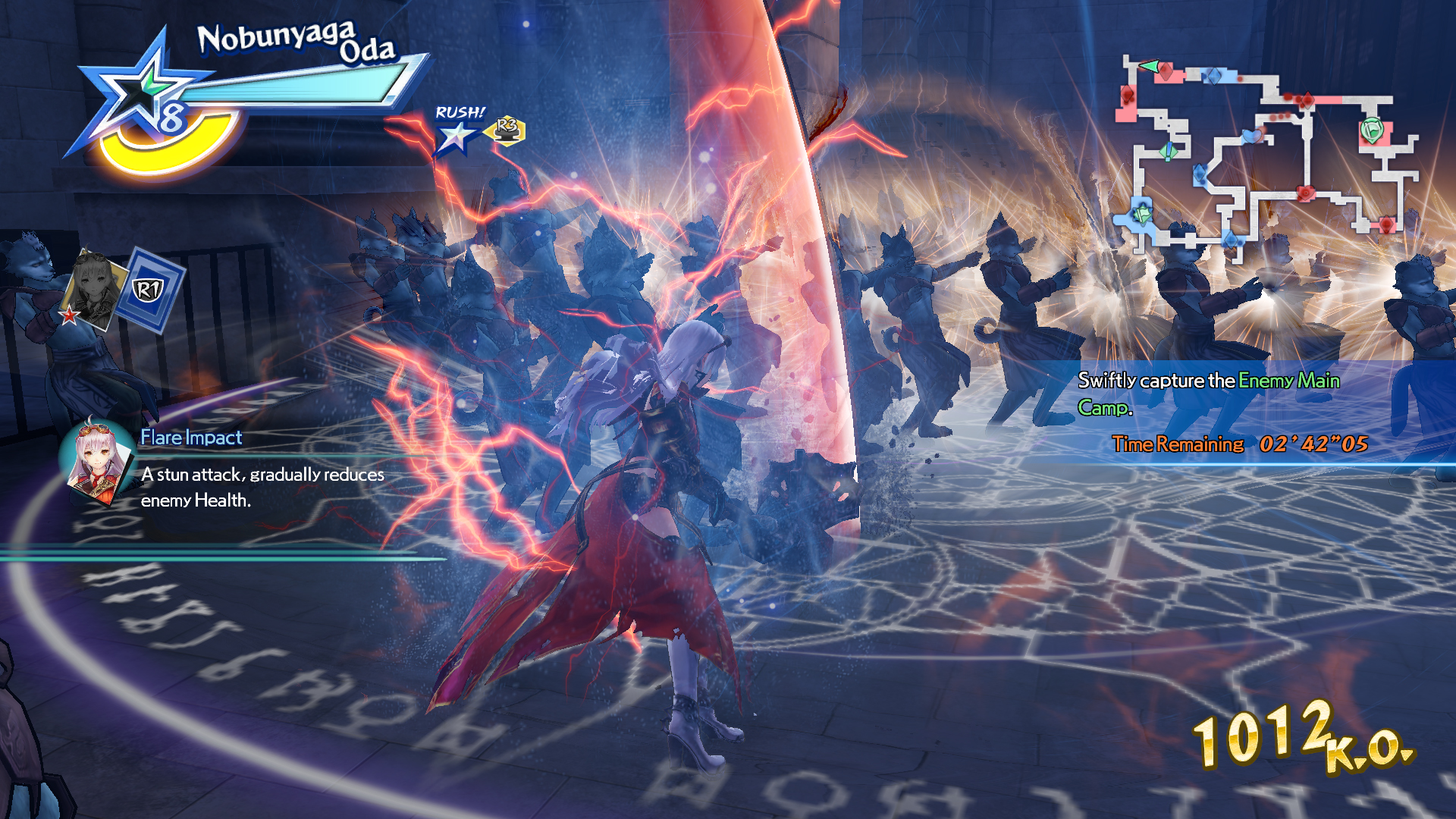 The Warriors/Musou series is like an old friend to me; I love it dearly, even though spending time with it can feel repetitive on some days. While the Dynasty and Samurai Warriors games have been criticized for being rehashes of the same storyline, I’ve been surprised with games like Warriors Orochi 3 and the licensed spin-offs from Legend of Zelda to One Piece, and think the tried and true beat-em-up/hack-and-slash formula has some life left in it. To commemorate a whole slew of games, Koei-Tecmo released Warriors All-Stars, a crisis crossover event featuring characters from different titles of the company. With a cast of thirty characters, does it have what it takes to become the pinnacle of the franchise?

With more than a dozen series represented in Warriors All-Stars, it’s only natural that an original storyline would hastily connect them together: in a kingdom far away, a magical spring is starting to wither. Princess Tamaki summons heroes from all over time and space, but an unfortunate accident causes them to become separated. Due to this, characters will join forces with either Tamaki, older brother Shiki, or cousin Setsuna to try and save the kingdom from destruction, with the ulterior motive to claim the throne as their own. The campaign that you enter depends on which one of the initial playable heroes you select. The initial storyline, while slightly generic and underwhelming at times, is serviceable enough to get engaged, and near the end becomes more intriguing.

Now, the main draw here is the character roster. While Warriors Orochi tackles a crossover between the Dynasty Warriors and Samurai Warriors franchises, Warriors All-Stars is more of a celebration of different series in general. While you have your usual Dynasty Warriors and Samurai Warriors representatives (including a new addition to the upcoming Dynasty Warriors 9, Zhou Cang), you’ve got other characters from popular games like Ninja Gaiden and Nioh to obscure titles that haven’t seen the light of day here in North America (Rio is a representative of… Rio, a gambling game that was Japan-exclusive). It’s an eclectic cast that really highlights the diverse gameplay of Koei-Tecmo, and it really shows since many of them play distinctly from one another; Ryu Hayabusa can zip through enemies quickly, while Rio employs a bevy of casino related items in the fray. While you do get a good portion of selectable characters to start out with, you’ll have to unlock the others during a playthrough, and that’s where the meat of the game lies.

The first couple of stages (where you’re dropped into a scenario based on which character you picked first), will acclimate the basic game flow of most of the game: you have different bases you can liberate from the enemy, highlighted as blue (yours) and red/yellow (other opponents). After beating enough enemies, you’ll take the base for yourself and be granted with whatever bonus that base acquired, ranging from health pickups to random equipment. Aside from that, you have sub and main missions, the latter of which you’re required to fulfill in order to win the stage.

While a one man army initially, you can recruit up to four more characters in order to fight alongside you as bodyguards. With the tap of a button, you can either summon them for a brief support attack or momentarily control them before you have to reset a cooldown gauge to use them again. These also tie into a bravery system; the more enemies you kill in a stage, the higher your bravery increases. This can lead to more devastating support attacks, which help out in the long run. It was cool seeing weaker party members become wrecking balls midway into a stage, and I love that feeling of destroying your enemies when they have the upper hand. Additionally, forming a party with different members will unlock different regard towards you, which will increase the more you interact with them. This can grant you bonuses like gallery unlocks to hero cards (Which acts as Warriors All-Stars’ weapon equipment), and it’s worth switching your party around to level up each person’s regard meter.

Other than your basic attacks (which you can chain together for combos), you have your devastating musou attacks (which can be unleashed once you give or receive enough damage), and a star rush, which will randomly place literally thousands of mooks in your line of sight so you can mow them down like the Sunday lawn. While this last attack is admittedly entertaining to watch the first few times, after an hour of playtime, it just becomes repetitive and tedious. It was a cool addition at first, but ends up being a bit distracting.

After these stages, you will open a world map and different activities will appear on the screen. These activities can range from ally garrisons (where you protect a base from enemies), to monster battles (where it’s basically a regular stage, except with MONSTERS!). Like the star rush attacks, they’re a cool addition at first, but they end up becoming repetitive filler the longer you play, which is a shame because the rest of the game is pretty solid.

Aside from the generic missions you can encounter during gameplay, a number of key battles and hero battles will also unlock as you level up. While the former advances the main plot, the latter influences your current party: by choosing to fight different battles at different times, and even having a certain character in your party, you can recruit more heroes into your roster.
In between stages, you can also rest at a central hub, where you can accept missions from heroes as well as hang out with them in the spa. These small interactions highlight the eclectic nature of the cast, and it’s always funny seeing William from Nioh fail at an arcade game.

Because of how factions work, around half the cast is unavailable for most of a given playthrough (save the true ending), so it’s a game that encourages different branching playthroughs, and will reward different endings based on criteria met. With so much to do, it’s actually a pretty neat idea to increase the replay value of the game. I just wished the padding of the generic stages wasn’t so prevalent.

With so much to unlock and experience, it’s interesting to see which endings you can unlock; these are also key battles that appear after meeting certain criteria. However, one of the biggest flaws with this game is that it’s single-player only. While 30 characters is admittedly small for a Warriors title, the fact that the cast plays very differently means that it would’ve been suitable for couch co-op, a staple in almost every Warriors game to date. The exclusion of it is jarring, and I really wanted to play this with a friend. It’s not like the PS4 can’t handle it, either. The lack of multiplayer is by no means a deal breaker, but the omission will be felt for those that want a co-op Warriors game. It would’ve been cool to see some enemies from different series pop up as well, not just a select assortment of monsters; as it stands, beating anthropomorphic troops is unique to the game, but it could’ve been cool to fight some NPCs from Dead or Alive or the Atelier games.

While Warriors All-Stars isn’t the best crossover, it’s great for fans of Koei-Tecmo. With a lovely cast of characters and a whole lot of content to unlock, it’s a good way to pass the time until Dynasty Warriors 9. Just be prepared to go through the motions more than you’d like to.

Elisha Deogracias is an aspiring accountant by day, freelance writer by night. Before writing for Gaming Trend, he had a small gig on the now defunct Examiner. When not being a third wheel with his best friends on dates or yearning for some closure on Pushing Daisies, he's busy catching up on shonen manga and wacky rhythm games. Mains R.O.B. in Smash. Still doesn't know if he's a kid or a squid.
Related Articles: Warriors All-Stars
Share
Tweet
Share
Submit