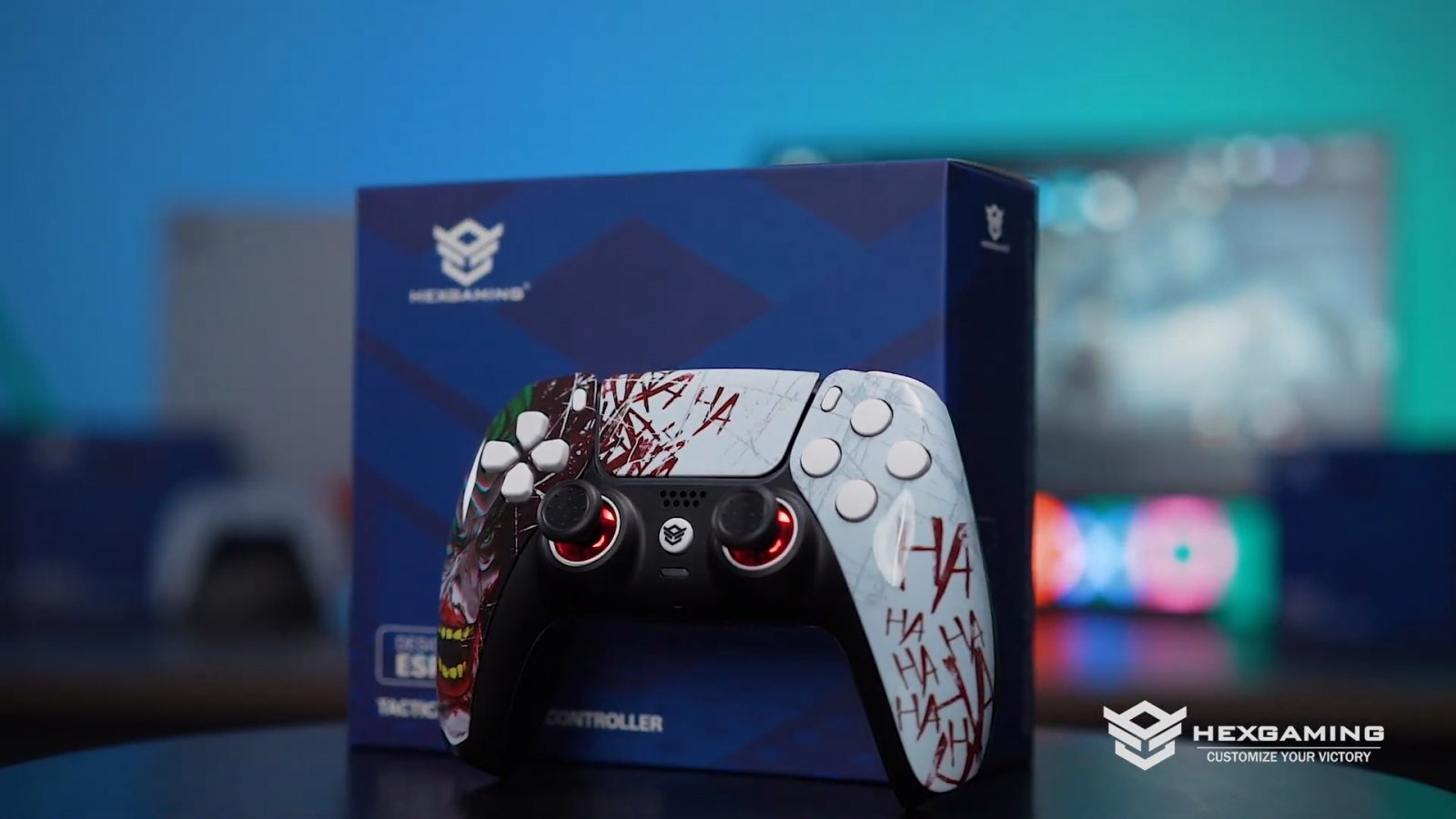 Finding the right controller isn’t always an easy task. It’s even tougher when few options exist. When the PlayStation 5 launched, I looked for something to give me a similar feel to the Astro C40 controller for my PS4. Honestly, I’d have even take an add-on like the Back Button attachment, but for quite some time nothing official or third party was announced. Until recently that is, when HexGaming brought us their variation of what a PS5 “Pro” controller looks like.

To begin, you should know that with some of what’s included, you can add it to your controller yourself. Most of that is because the company who makes kits for the back buttons and hair triggers, ExtremeRate, is the one behind HexGaming. I was looking at their page on Amazon and saw a review that stated the equivalent of “don’t buy this, you can do it yourself”. I have friends that have added the ExtremeRate back buttons as well. But here’s the thing, you deprive yourself of not only a really nice custom controller given the availability of custom painted designs, but also the clean build you get from a professional assembly.

To speak to the assembly, the controller itself feels like it came out of a factory like this. There is nothing shoddy about the workmanship behind it, it’s the opposite. It’s such an exemplary build you’d almost think PlayStation put together this version themselves. Holding the Rival Pro in your hands, it just feels right; the grip doesn’t feel overly complicated with the additional back pad, or the hair triggers throwing you off with their more compact design. I received a gloss one with a custom paint job, but there are also matte finished variations. I was a bit worried about it being slippery, but it felt very nice to the touch and the design has a clear coat, so you don’t have to worry about your paint rubbing off.

Speaking of the paint job, I have the “Clown Hahaha” design, which features a familiar laughing criminal on it. The hero shots you see on Amazon or the HexGaming website are going to be what you get, direct representations of the product you receive. The Clown controller looks fantastic, and with over 150 designs just for PS5 on their website, along with several on Amazon as well, you’ll have plenty to choose from. I’m also really pleased with the extra color on the triggers, blending white and purple to match everything nicely. Also, the decorate ring around the thumbsticks is fire, adding a nice extra splash of color. 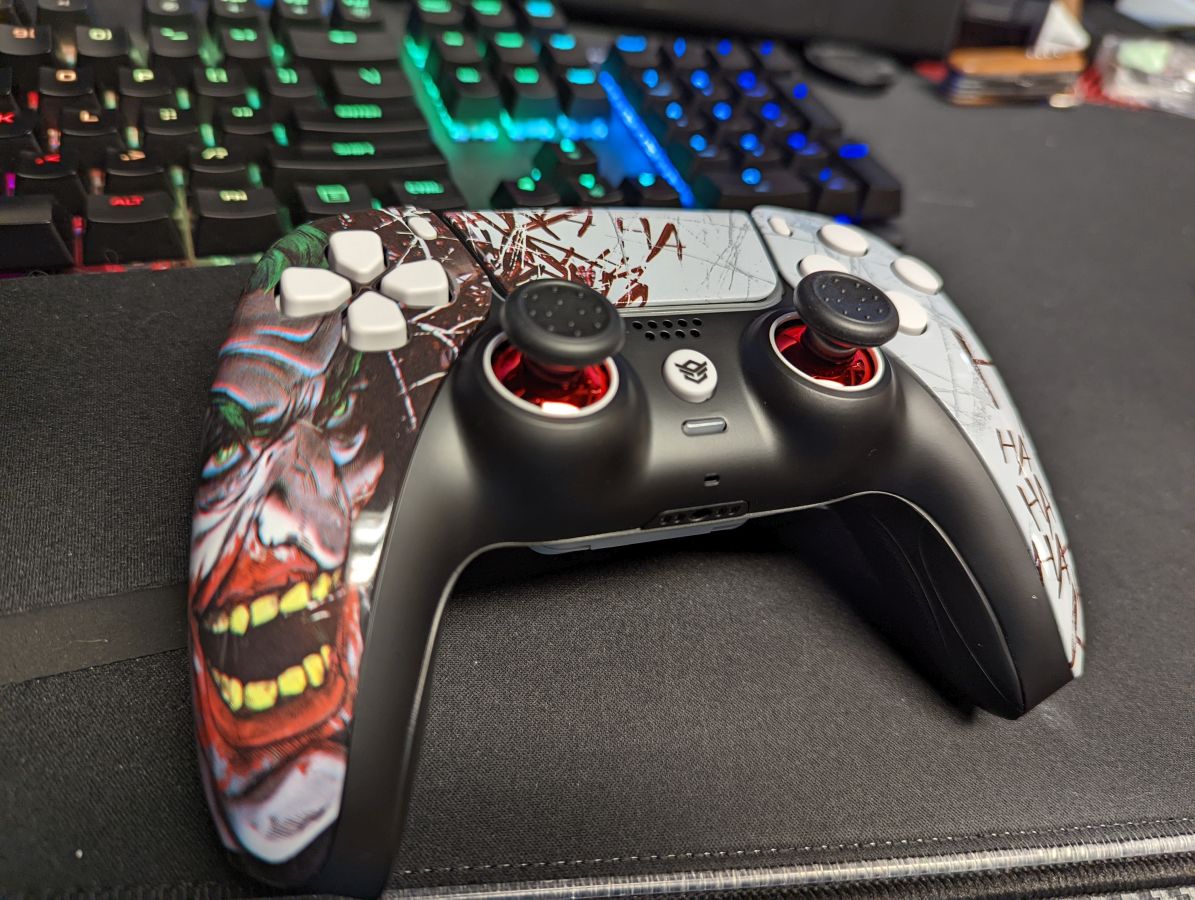 As for the additional features that make this a “Pro” controller, I’m very pleased with them, even if they don’t beat my favorite “Pro” controller in Xbox’s Elite Series 2. Remember, this is a standard PS5 controller, but enhanced by the expertise of HexGaming, so certain modifications (like stick tension) aren’t going to be possible unless provided by the manufacturer. Even if those features were possible, they might add more to the price tag than they’d be worth.

The specific features advertised by HexGaming for this controller are 6-in-1 interchangeable thumbsticks, the aforementioned four back buttons, and the hair triggers. The additional four sticks are in a little box to make carrying them easy, with two short domed ones to replace the two short concave sticks already on the controller, along with a tall concave and tall domed. These are easily changed out as well, although it takes a good pull to remove them and a good push to make sure they’re in place. As for what to use, I prefer the two short concave ones myself, mainly because I have smaller hands, and I like the extra grip on them. Something of note, these will take time to get used to even if you stick with them, because they’re slightly taller than the ones you find built into PS5 controllers.

Adapting to these sticks was honestly my biggest challenge, as the additional accuracy afforded by more stick movement clashed with what I was used to. Take time with the controller to get it down instead of abandoning it though, because I can certainly tell you that I was not impressed in my first few sessions with it. After playing with it for a while, I found myself adjusting and my gameplay improving, to the point where my accuracy was at least somewhat on par with what I get from the Elite Series 2. 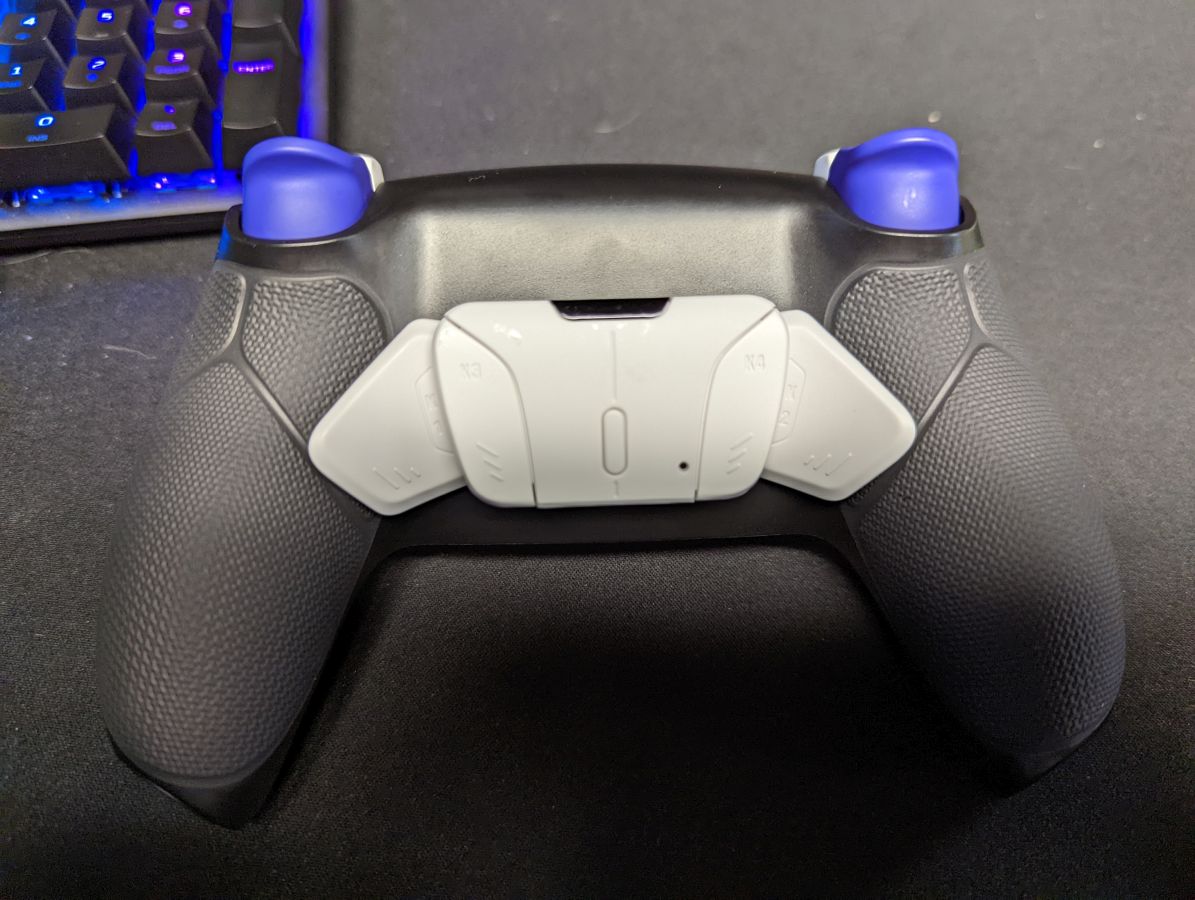 The extras that most are probably going to want this controller for are the four back buttons. These do feel more similar to the PS4 Back Button attachment, and I really like that. The buttons themselves take the form of two paddles which lock in directly under your fingers, with the other two buttons on the device right next to where each paddle attaches. This means the two additional buttons are harder to press, and I haven’t gotten used to them yet. I do like how there are grooves on them though, allowing you to identify them quickly for swift presses. The paddles themselves are the best parts of this, and the mouse button-like clickiness of them make it really easy to know when you’ve pressed them. This is especially useful in Warzone or the recent Call Of Duty: Vanguard, because slide canceling requires a double circle press.

Programming the back buttons is also extremely easy. You simply press the settings button in the middle of the device, and once the indicator light comes on, you know you’re in settings mode. From there, you hold down the paddle/button and whatever button you’d like to remap it to, and voila! This makes for an effortless experience, and even better, allows for quick remapping if you feel like you need a different button for the game you’re playing.

How to Remap Your HexGaming PS5 RIVAL Controller Buttons

The unsung heroes of the Rival Pro are two, and that’s the grip and the hair triggers. Starting with the grip, the added rubber grip is so incredibly comfortable in your hands. It allows not only for that comfort, but keeps the controller firmly in-hand, preventing any slippage during an intense moment. The hair triggers might be the best part of the Rival Pro. Everyone who has a PS5 controller knows the adaptive triggers are incredibly squishy, and while it’s part of their charm in single player, it isn’t so welcome in competitive games. With these hair triggers, that’s no issue, given they, like the back paddles, feel more like mouse clicks. The R1/L1 goes from a 1.2mm pull, to only a 0.5mm pull, and the R2/L2 goes from an insane 7mm pull to only a 2mm pull. Anyone who plays a competitive shooter knows they are games of split seconds, and more often than not the Rival Pro hair triggers give you that split second you need to get the win. The only drawback you might fall into is for racing games, as most of those require more pull from a trigger to work, so more often than not, the Rival Pro will be incompatible with them. 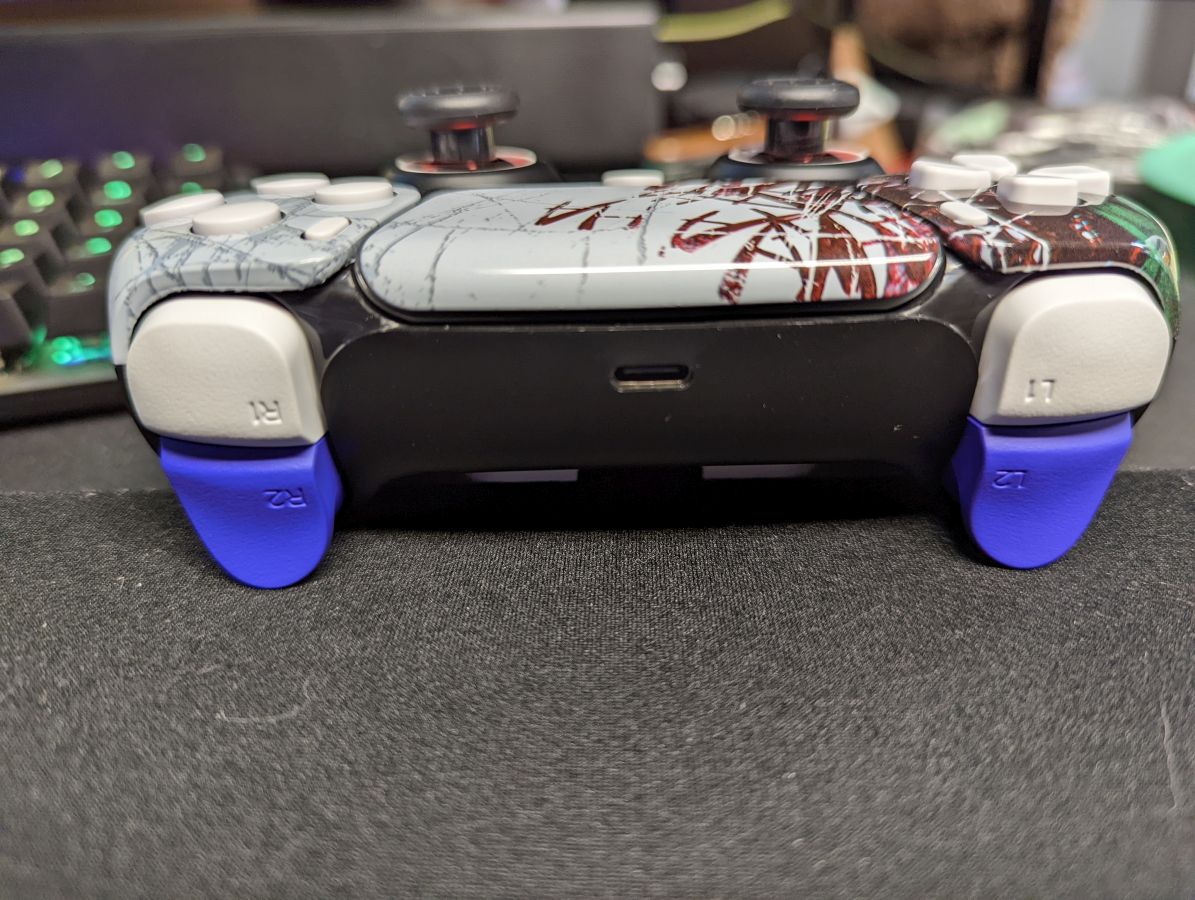 Something of extra benefit to note, the controller also works on PC! While this space is more crowded in available controllers (not to mention mouse and keyboard combinations), it’s nice to know the money you’re spending on the Rival Pro gives you some versatility. Not only does the controller work, but your back paddles/buttons are all compatible, allowing you to get maximum use when attached to your computer.

The only qualm I have with this controller in the slightest is the price point. Coming in at a base price of $199.99 for a plain black controller, and $289.99 for a special design, it’s a lot to spend. It was mentioned above, but you could spend $44.99 for the back buttons and grip and $15.99 for the hair triggers. After your $69.99 investment in a controller, you’d be sitting at $130.97, a savings of $69.02, nearly another PS5 controller. That being said, the risk you run of messing up something inside your controller could mean you lose $131 bucks. With a 90 day warranty behind the Rival Pro, you might look at the $69 as an investment in knowing it’s going to work right out of the box.

You can purchase the HexGaming RIVAL Pro PS5 controller on their website or on Amazon, just click the corresponding link!

It might be expensive, but in a space without many options, the HexGaming Rival Pro PS5 controller packs all the features any aspiring competitive player is looking for. The back buttons are responsive, clicky, and easily remapped, the hair triggers are to die for, and the instantly swappable thumbsticks are a nice touch. With all of it assembled by an expert team, you can take advantage of all of the extra features to play to the best of your ability. You just might have to eat Ramen for a week.

David Burdette is a gamer/writer/content creator from TN and Lead Editor for Gaming Trend. He loves Playstation, Star Wars, Marvel, and many other fandoms. He also plays way too much Call Of Duty. You can chat with him on Twitter @SplitEnd89.
Related Articles: HEX RIVAL Pro PS5 controller
Share
Tweet
Share
Submit