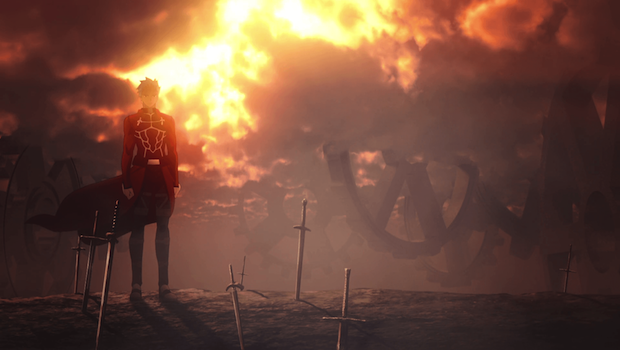 The Holy Grail. An almighty wish-granting device, able to fulfill any desire only for those who are worthy. War erupts every few generations of magi, pitting the major families of magic users against each other and summoning ancient heroes and legends to be their comrades-in-arms as Master and Servant. Yet the Fifth Holy Grail War has commenced, less than a decade after the Fourth; and in a small shed in Fuyuki City, on the edge of death, an unassuming boy accidentally summons a female knight, called Saber, with unparalleled abilities.

This is the premise of Fate/Stay Night, originally a visual novel written by Kinoko Nasu. After a stellar adaptation of its prequel, Fate/Zero, the anime studio ufotable chose to tackle the main title. This is no small task – Fate/Stay Night is split into three stories, or routes, which chronicle its protagonist Emiya Shirou’s battle for the Holy Grail based on three possible outcomes.

All are equally relevant to the overall story, all are significant in length, and the collected work is one of the most prized publications in the visual novel community and one of its biggest mainstream successes.

If any studio could rise to the challenge, though, it would certainly be ufotable.

Shirou’s journey from unassuming student to a powerful Master is the focus of Unlimited Blade Works.

Unlimited Blade Works is an adaptation of the second route of the visual novel, and is largely influenced by Shirou’s relationship with another Master, Tohsaka Rin, and her Servant, Archer. While Shirou is unaware of the life of a magus, having been taught in secret by his adoptive (and deceased) father, Rin is a Tohsaka – one of the most powerful magus clans, able to imbue their power into gems that can be unleashed for concentrated blasts that are exponentially more powerful than normal magic.

The method with which these two are introduced is masterful. In the visual novel, a prologue plays out from the perspective of Rin, and then the visual novel proper starts, following Shirou. You only begin to realize their intersection in Shirou’s perspective, leading to the point of contention where both their perspectives had ended, with the two in a stalemate whose outcome is the first branching path of the narrative.

Unlimited Blade Works takes the same approach, with Episode 0 and Episode 1 following the perspective of each protagonist until they join together in an uneasy alliance. Rin’s approach is defined, calculated; she was born for this, and ready to lay down her life for her family’s pursuit of the Grail. Shirou, meanwhile, stumbles into his situation, and the moment of Saber’s appearance in the shed is every bit as perfect as it could be.

Animations are smooth and beautifully done.

From these opening moments on, one of the greatest qualities that puts Unlimited Blade Works above and beyond all other Fate/Stay Night adaptations is the sheer art of its visuals. The characters are all gorgeous and animated in perfect style to the visual novel, and every swipe and slash of a blade is fully animated, even if only appearing for a few seconds of real time. The true beauty for me was in the details – the way items traced lines when Shirou empowered them, the way Rin’s body moved naturally as she pursued her target down a stairwell, the detail in a Servant’s Noble Phantasm ripping through the air with magical force… This is, simply put, the most gorgeous anime series I have ever watched, and it is consistently beautiful in animation and quality of individual frames.

The setting and conflicts change constantly as alliances form and break.

As the war rages on, Rin and Shirou form an uneasy alliance. Shirou clearly needs guidance, and Rin seems to take mercy on him – she seems to like having an “apprentice” of her own, and since Saber is one of the most powerful Servants in the war, having her Master on your side isn’t a bad idea. Rin sits down with Shirou to explain the finer details of the war, giving some exposition for those uninitiated. There are seven Masters chosen by the Grail, selected because they each burn with a certain desire and have latent magical abilities.

Each Master summons a Servant to fight, one from each of the seven classes: Saber, Archer, Lancer, Caster, Rider, Assassin and Berserker. While these Servants are legends in their own right, from many different eras, they go by these monikers to hide their identity – knowledge is power, and knowing your enemies’ name means knowing their power, and more importantly, their weakness. Each Servant’s legend is embodied in their Noble Phantasm, an ultimate skill that unleashes their full power, but they must name it to use it, revealing their identity in the process.

Servants like Saber and Lancer favor combat, while Caster and Assassin prefer to fight on their own terms.

At the end of the war, only one Master may take the Grail – this is a zero-sum game, and while allies for the time being, Rin makes it no secret that one day she and Shirou will have to cross paths for the last time. Much like Fate/Zero, the story of Unlimited Blade Works is dark and moody. Each character has their own reason to seek the Grail, and so many stories become tragic as Masters and Servants fight and kill each other.

There’s no Dragonballs or magic here – although there are some deus ex machina moments, characters will die on their quest to seize the Grail. Fate/Stay Night as a whole differs from Zero in that it’s a story focused on Shirou, and although the POV shifts around, it’s a little more focused on the two protagonists than anyone else, so Zero fans may have a hard time warming to Stay Night at first. Thankfully, Shirou and Rin’s story is a high point of ufotable’s adaptation.

Things are a little rocky between the two protagonists early on.

The two go through some troublesome times, but their relationship – and eventual romance – is rather sweet to see unfold on-screen. Every voice actor in UBW does a fantastic job, but Shirou’s and Rin’s especially nail their performances, creating some very touching and believable moments.

The scene in the graveyard after their confrontation with Caster in the Fuyuki church was one of my favorite moments in the visual novel, and that softer moment is nailed in UBW, creating a nice contrast to the otherwise bleak and destructive nature of the Grail War. As Rin leans back-to-back with Shirou, betrayed by her Servant, there’s a lingering unspoken question: can she be the magus she was raised to be? While Unlimited Blade Works is commonly referred to by VN readers as “Shirou’s route,” this adaptation strikes a balance and finds better footing in leaving Shirou’s head and developing the dual protagonists on their own terms.

Scenes like the cemetery punctuate the action very well.

Taking down Servants one-by-one, the series does follow the visual novel extremely well, meaning there’s a lot of set-up and exposition before any major action goes down. This leads to some pacing issues in the middle of the series, as the action slows down a bit during their search for Caster and her Master, and again during the buildup to the final confrontation for the Grail. It was the same way in the visual novel, but the benefit here is that it gives some breathing room for ufotable to expand on side-stories that would normally break up the action later, like the Servant identity scenes.

Normally taking place after their major confrontations, the backstories of the different Servants are littered throughout the series instead, giving each one a solid block of time to develop. Considering there won’t be an adaptation of the Fate route for the time being, this is where ufotable gets the most relevant info from that route – the identity and history of Saber – out of the way. They also spend some time expanding the backstory of Caster, using info that wasn’t even mentioned in Fate/Stay Night proper, pulling instead from its companion works like Fate/Hollow Ataraxia to fill out the lore of the anime.

The most pertinent backstory to this route and adaptation, though, is the identity of Rin’s Servant, Archer. Shrouded in mystery and dry wit, Archer is an enigma with a malicious distaste for Shirou; his attempt to murder him during an early assault on Caster’s makeshift-fortress solidifies their relationship, especially in what he says to Shirou as he slices at him: “Drown in your ideals and die, Emiya Shirou.”

The climactic fight between Shirou and Archer takes place in a fantastic setting.

Revealing Archer’s identity is a major part of the visual novel, and again, ufotable understands how to build up to it without overdoing it. While adhering to the original’s script means it runs into the same issue of being a little too overt with the twist (you’ll probably see it coming before it happens), it’s the impact of the moment that’s nailed – the final conflict between the two is electric, and a highlight of the year. The conflict of ideals against reality is embodied perfectly in Shirou and Archer’s clash, and the duality of the two is a compelling theme throughout the series.

Every major moment is nailed in the same reverence, from Berserker’s last stand to the titular Unlimited Blade Works, and it shows that ufotable are not newcomers to adapting complex works. Their approach to many situations makes events much clearer, providing extra context and molding the original work into something that seems made for the screen.

The music of Unlimited Blade Works tends to be parabolic. Sometimes background music used to great effect, and other times white noise or just plain silence rings painfully loud during a scene that would be otherwise improved by it. Considering the visual novel has such a wealth of amazing pieces to pull from, the critically underused EMIYA among them, it’s a shame that Unlimited Blade Works made less liberal use of its stellar soundtrack than its prequel and predecessor, Fate/Zero. The opening songs for both seasons were fantastic, however, and while they won’t be the next Guren no Yumiya (Attack on Titan’s infamous OP) they certainly fit both the tone of the show and served as excellent get-pumped-it’s-Fate-time soundtracks, especially with the second OP entitled “Brave Shine.”

As a standalone anime, Fate/Stay Night Unlimited Blade Works does the previously unachieveable: create a visual adaptation of a beloved visual novel that is both faithful to its source and a work that is approachable by any and all. Managing to adapt Unlimited Blade Works so effectively, only minor nitpicks keep this from being one of my favorite anime series ever made. A perfect follow-up to Fate/Zero, and a strong recommendation, whether you’re new to the medium or a Type-Moon fanatic.

This is only the start for ufotable, though: their next challenge is adapting Heaven’s Feel, the third and final route of Fate/Stay Night, which tackles the true nature of the Grail, sheds light on many behind-the-scenes machinations of the war, and forces Shirou to deal with how his ideal conflicts with the realities of life. After watching UBW, though, ufotable is more than fit for the task – they’re set to make the Fate series a definitive work of anime.

Fate/Stay Night Unlimited Blade Works is a fantastic adaptation of one of the best visual novels around. Compelling characters, beautiful animation, a memorable story and excellent VA and music work make this a must-watch for anyone, anime fan or otherwise.