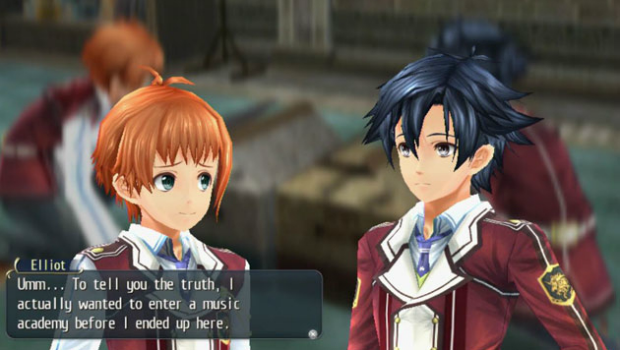 The turn-based RPG of my day is having a sort of crisis moment.  2016 could very well decide the future and fate of this genre now mired with tasteless clones, savage disappointments and retread uselessness.  How does a simple game of the past keep up with the admittedly superior RPG experiences of a Fallout 4 or Skyrim?  My hypothesis is that they don’t; the new turn-based RPG will only draw slight inspiration from those greater sources while growing intellectually within the genre’s parameters.

If my hypothesis proves true, then consider The Legend of Heroes: Trails of Cold Steel a case study.  Appropriate is this designation, as The Legend of Heroes is based around an enclave of special students within a University like setting.  A rigid class structure of nobles and common folk is interrupted for the first time ever at this university, with a special “Class VII” being the first to combine both of the classes together into one.

The main protagonist, Rean Schwarzer, is a nebbish little man-boy trapped in perpetual nervousness.  My favorite “Rean Moment” comes early in the game where after finally breaking through with a pretty blonde classmate that has been hating him since day one, Rean manages to quickly compare her to his little sister.  Ouch!

This is the first indication of a game that isn’t ready to take risks on the character development and story.  Rean is just one of several J-RPG archetypes that you will find in this game, including the indignant commoner, the disinterested petite, the strong and sexy female, and of course, the aversive but crushing female counterpart.  The storyline isn’t much more interesting than the stock character types, so don’t go rushing out for this expecting a great story.  There’s always elements to enjoy, but the writing is poor and it’s all very predictable.

That said, the game itself is actually truly magnificent for the times.  The battle system is very simple but lends to great amounts of strategic planning.  Battles are fought in a free area with turn-based actions.  Characters can only perform one standard action per round, much like a Dungeons and Dragons experience.  You can choose to attack with an “Art” which is usually a magic spell, or a “Craft” which is typically a buff or a natural special attack.  You can also use a standard attack, move, or use an item.  Character links give the battling characters the ability to team up on certain attacks, and can be enhanced using bonding events described below.

The battle system is not incredibly innovative but it is an example of how battles work best with these types of games.  Random battles are decided by actual enemies on the map that you have to touch to enter battle with, and so this gives the player full control over whether or not they want to fight (given they can run away.)  Turn-based battles give the game a classic feel but the open arena keeps things free and loose, and gives the fights more action.

The Legend of Heroes keeps everything very simple and easy for the player, and this is not a negative in the least.  Battles are tough and take real strategy, but you can learn the system and be battling ably very quickly.  The game allows you to fast travel, the first instance of borrowing from a modern open-world games.  The game provides several well organized tabs for keeping up with different types of items, tasks, quests, locations, and banter from the party and the townspeople.  Everything is very clean and easy, and I love that.  Never once did I find myself searching for something or being lost.  That is even more incredible considering the high number of things you can do in the game.

Beyond just world exploration, story development, and battling, The Legend of Heroes gives you multiple other tasks that you complete to help further the game and add to your abilities and items.  You can fish, cook and collect recipes, craft items, and create special “quartz” materials.  The quartz are used to provide the characters with buffs and special abilities.  As the main character, you are also able to perform special bonding activities, triggering small cutscenes and giving you more of a battle bond with the chosen classmate.  The game is broken up into on-days and off-days.  On- days are story driving and usually involve completing mission tasks or battling.  Off-days are free time for the main character and this is where you can shop, sell items, exchange materials for creation, and use the bonding points for the activities with other party members.

The game has a really nice graphical look considering the PlayStation Vita platform.  Everything is in 3D, all of the cutscenes are seamless and everything is fully acted, even if sometimes it’s just a thought bubble or characters standing around.  Never does the game simply use little static images during cutscenes, a curse of modern turn-based RPGs.  The character models, enemy models, towns and dungeons, and basically everything is well designed and looks great.  Nothing of the aforementioned design is going to blow your mind or be considered cutting edge, however.  The same can be said for the music, though it really is on the lower end of quality for RPG games.

The Legend of Heroes: Trails of Cold Steel

The Legend of Heroes: Trails of Cold Steel is a nice example of how a turn-based, old school RPG should be done mechanically in these times. Sadly, like so many others, the game is lost in a rather bland smattering of characters and story. If those elements aren’t important to you, then you’re going to find a very deep, simple, fun, and innovative game here that will provide hours of entertainment.

Patrick Rost has been with Gaming Trend since 2013. At first focused on sports coverage, Patrick has gone on to cover a wide range of games and other products for the website. Outside of Gaming Trend, Patrick writes and records music, grinds perpetually in Elder Scrolls Online (PS4), and lives day to day with his two dogs, Bob and Stella.
Related Articles: The Legend of Heroes: Trails of Cold Steel
Share
Tweet
Share
Submit