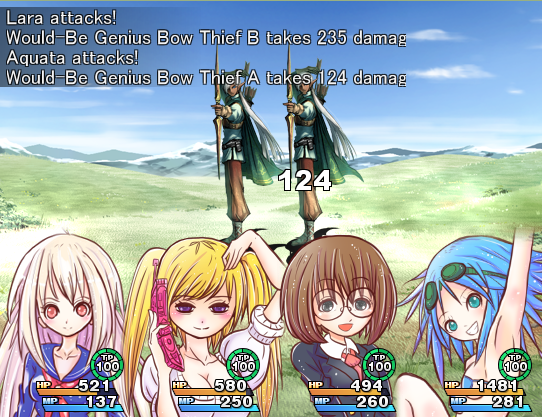 I will admit, the premise of Hero and Daughter+ intrigued me. “A weak guy who needs a bunch of strong women to fight his battles for him? Sounds like something I could approach from a feminist angle!” And honestly, viewing it through that lens was one of the only things that got me through this game. It suffers greatly from a lack of personality, making most of the gameplay feel like a grind until the end.

Hero and Daughter+ begins when Ralph, the town hero, is called upon by the king to defeat the dark lord Dahklorde (yes, that really is his name). Apparently this is something that happens a lot, because Ralph complains about it feeling old hat. In response, one of the king’s guards hands him a drink and, thinking nothing of it, he takes a sip. Instantly, all of his hard-earned experience points are gone and he is reduced to Level 1. Now, if he wants to stand a chance against the dark lord, he needs to recruit a strong party to battle at his side.

Soon after, Ralph meets a creepy bartender at the local pub who has a thing for magically summoning pretty girls. He is able to summon all types of girls from many different situations: a maid who’s just been fired from her job, a warrior in the middle of a fight, a blonde in a prison cell, and even an angel out of heaven. Each has her own specialty, promising a well-balanced party.

Not entirely sure what a specialty of “Defense” means.

Every girl has a basic attack that varies with their individual strength, self-skills that they learn as they level-up, and the ability to learn magic spells. This is the first way Hero and Daughter+ disappointed me. A bulk of the self-skills the girls ended up learning are utilities, such as raising their Agility for X number of turns. Though they are indeed unique to every character, most of them don’t feel all that helpful against powerful enemies. There are also very few girls that start out with magic knowledge and teaching them spells is a pain, which I will get into later in the review.

In spite of all the ways this could sound like a dating sim, it isn’t truly one, or at least not like any that I’ve seen. You can increase your affection with each girl by chatting with them when you get the chance, giving them presents, or frequently taking them out to raid dungeons with you. The girls start out feeling like carbon copies of each other, only dishing out snark about Ralph being Level 1 and not much else. When they do start to branch out, the conversations are pretty bland. They stick to specific subject matter – for instance, the fact that one of the girls, Aquata, wears a swimsuit all the time – or devolve into flirtation with Ralph.

I know this game is supposed to be poking fun at RPG tropes, but most of the girls you summon are so deeply entrenched in their own tropes that there’s nothing interesting about them. Any flirting is rendered meaningless because everyone is so one-dimensional.

Even the special illustrated cutscenes have only one line of dialogue.

The first part of the story hinges on exploring three dungeons – Forest, Earth, and Fire – and claiming the three jewels within them to unlock the dark lord’s castle. (Not really sure how this works, but the game openly says it doesn’t know either, so there you have it.) Each dungeon has five floors; the first four have treasures scattered around and monsters you can encounter, and the last floor has a boss to fight. The winner’s prize is the dungeon’s jewel.

The dungeons are at graduated levels of difficulty, which actually comes in handy for training up the new girls you summon throughout the game. It takes some effort to level-up your troupe of female fighters enough so they’ll stand a chance against the boss, though. For example, the first dungeon has rats with 200 hit points and slimes with 450 hit points, but the boss is over 3,000 hit points. That’s quite a bit of a difference. Then after you’ve defeated the boss, it’ll be stronger the next time you meet. This makes bosses even more disproportionately challenging.

There are mini-bosses you can find within dungeons with bounties on their heads, and their hit points are in the thousands as well. Unsurprisingly, neither the bosses nor the characters you can hunt for their bounty have any sort of backstory. There are NPCs you can talk to, with randomized positive or negative effects, but even some of them feel pointless. There’s a nun that I’ve been donating to, and I still have yet to find out what all my gold is going toward.

That’s it. That’s his entire backstory.

Hero and Daughter+ ends up putting a lot of emphasis on gaining experience points. It’s how Ralph got into this mess to begin with, and it’s the only way you’ll make any progress. Because Ralph is stuck at Level 1, any EXP he earns in battle has to be distributed to his harem of women warriors, which I thought was a pretty interesting mechanic. The girls in your party earn their own EXP that’s automatically applied after beating monsters or bosses, and any girls you leave behind steadily earn EXP for the village while you’re away.

Wait, what? Yes, the village has its own level as well. Starting out, there are only a few things you can buy at the shops and a few spell tomes you can teach to the girls. Anything more you want has to be earned through leveling up the village. Besides waiting for the small amount of EXP from the girls to trickle in, you can grant the village experience through buying and selling goods. Experience can also be gained by fighting intruders when they appear, an event that sometimes crops up right after your party is defeated. This is a good chance for some of the girls you never bring on your adventures to earn their own EXP as well.

While a village being able to level up is an unusual choice, it’s also one that can greatly hinder the strides you want to make. Being stuck with the lowest level potions and a small handful of spell tomes means you’re constantly raiding dungeons to find the good stuff and only utilizing the women with wicked self-skills, leaving the rest to languish at the pub. Several times I would add a girl to my party, battle with her in one dungeon, then never pick her again.

Also, you can buy your own house and invite the girls over to see another single line of bonus dialogue.

There are a couple of aspects of Hero and Daughter+ I like. As I mentioned, the EXP distribution is a nice feature. You could choose to level up your favorite fighters quickly, or do what I did and divide everything up evenly so you won’t have any stragglers. The couple of girls I like, I really like, and I was able to assemble a dream team with the resources I was given. Another neat tidbit is that you’ll sometimes find gold slimes or metal slimes in dungeons. If you’re lucky enough to engage them in battle and not have them flee immediately, they’re easy to kill and offer insane rewards – 30,000 gold from gold slimes and 30,000 EXP from metal slimes.

However, most of Hero and Daughter+ didn’t grab me. The characters are uninspired; there is literally a blonde named Selphie who carries around her cell phone like an accessory. The music is okay, but even at a low volume the sound effects are fairly abrasive. Often I played this game with my computer’s sound off because there’s no option in the menus to mute or turn down the game’s volume. One of the big plot twists this game could’ve had – the ability to eventually summon your daughter from the future and have her fight in your party – is spoiled by its own name! And the other plot twist is only briefly exciting before it creates a lot more work for you.

Ultimately, it ends up feeling like a whole lot of grinding without much payoff. If I had a compelling story as an incentive, whether it revolved around romance or adventure, I would have enjoyed my time with this game much more. It just became hard to find the motivation to open it up and play it.

Hero and Daughter+ boasts tons of dungeons to explore, powerful girls to summon, and enemies to defeat. Unfortunately, this seems to be a case of quantity over quality, as most of the characters have flimsy backstories and there are very few surprises. Instead of being treated to a richly detailed story about the world and its inhabitants, making progress largely feels like a joyless numbers game.

Sarah Marchant is an office admin for a nerdy t-shirt company. She has a soft spot for indie games, a passion for story-driven titles, and a weakness for cooking games and anything with zombies.
Related Articles: Hero and Daughter+
Share
Tweet
Share
Submit