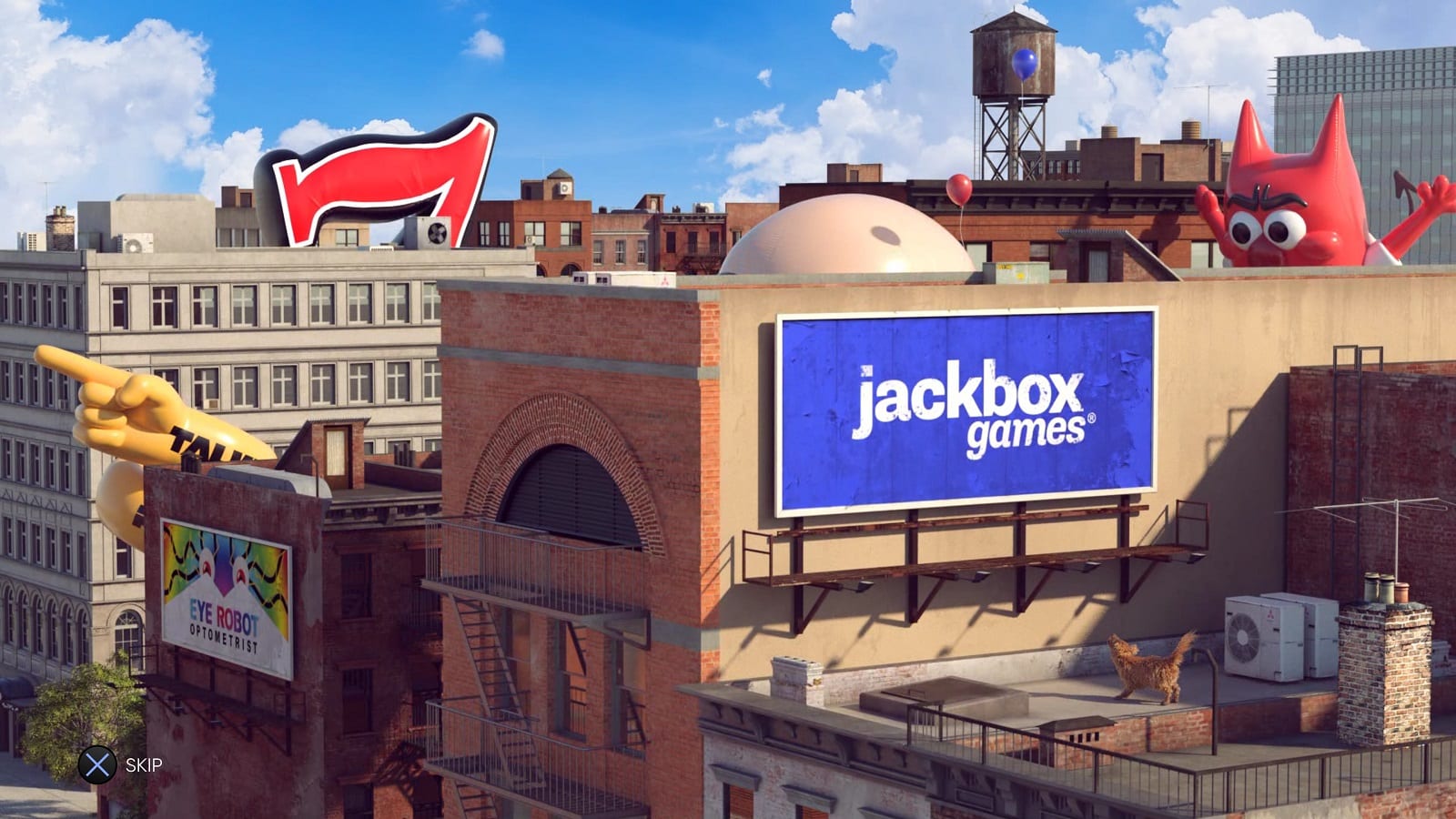 The Jackbox Party Packs have been a long standing tradition at family gatherings in my household. The packs as a whole have something for literally everyone, even my mom who hates video games, and they’ve only been getting better as they go on. A year after Party Pack 6, Jackbox Games has graced us with the only number that is indisputably better than 6: 7. This game once again contains five, smaller games that comprise the pack – Talking Points, Blather ‘Round, Quiplash 3, The Devils and the Details, and Champ’d Up.

In Talking Points (3-8 Players), each player begins by creating a topic by adding a word or two to a prompt, then selecting the topic they will then give a talk on. These topics can be basically anything, from “Sorry if I seem shaken up. I just learned that I have no mother.” to “Why are all the cool teens talking about the weed? I am a cool teen so I’ll tell you.” While one player is giving the talk, another is their assistant selecting pictures to go with each slide, and the rest are voting on how engaging the talk is at any given moment by pressing thumbs up or thumbs down on their device. After their speech, the player is then awarded points based on audience engagement, with a portion also going to the assistant, and the one with the most points wins. I never thought public speaking could ever be fun in any way, but this is one of the best games in any pack so far! It’s like trying to give a book report on a novel you definitely didn’t read over summer vacation, except no one’s going to be disappointed in you. Everyone can relate to trying to BS their way through something important, and the absurdity of these situations along with trying to connect these seemingly unrelated pictures to the topic is a joy to watch and do yourself. 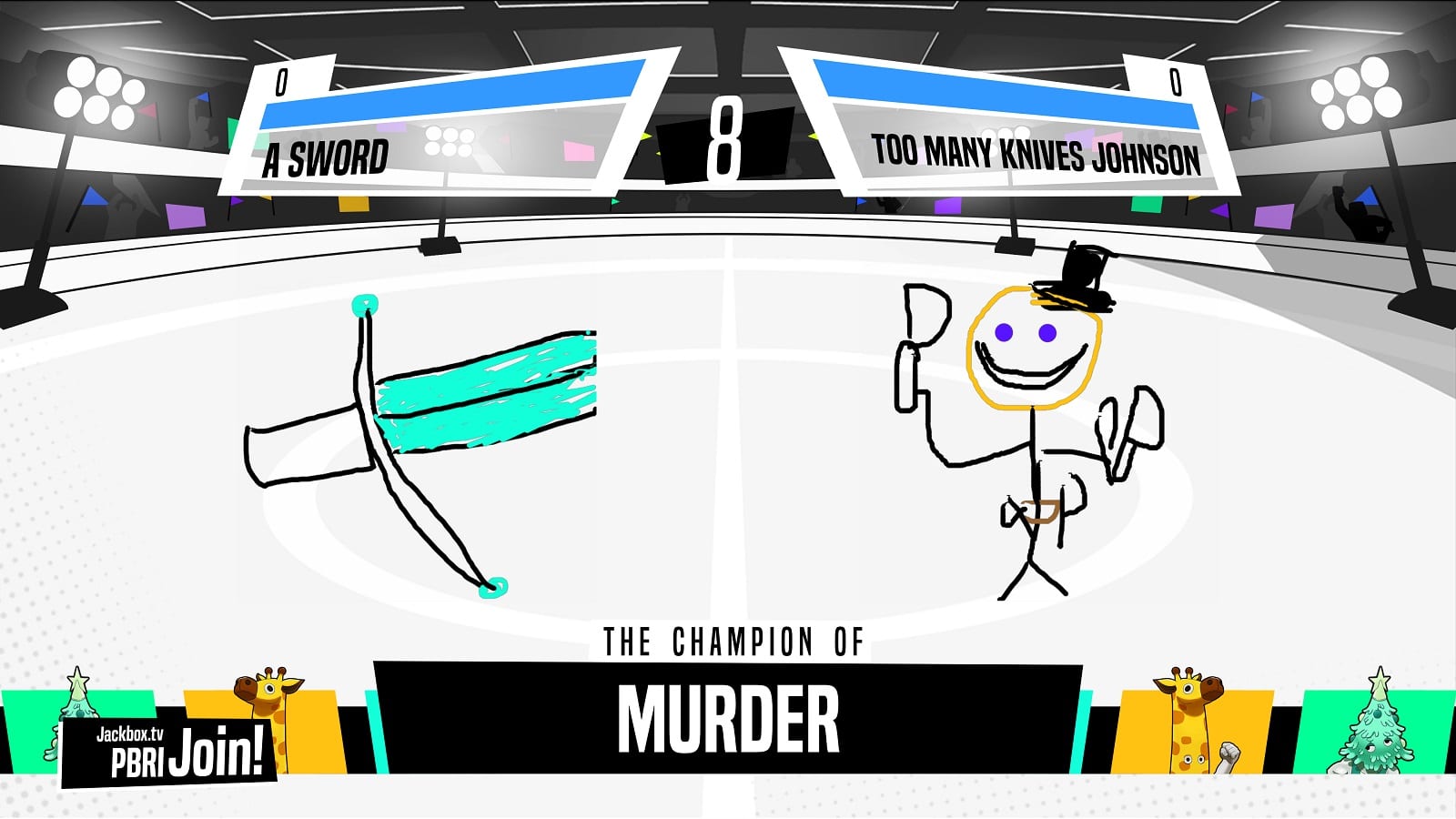 Blather ‘Round (2-6 Players) is less improvisational comedy and more trivia. In each round, one player is given a subject from pop culture, like Moby Dick or Transformers, and has to get the others to guess their answer by cobbling together clues with premade phrases. It’s basically charades, but the complete opposite since it relies entirely on words. It doesn’t facilitate conversation like the other games do, but it’s still a lot of fun. Some may find scrambling to make good clues frustrating, but that’s what makes it funny. Especially when no one gets the answer, and once it’s revealed everyone wonders how no one guessed it.

Champ’d Up (3-8 Players) sees combatants drawing their champions, for things like Friday Night and Grandma’s House, and battling other champs for the title. It’s a very strange game, especially if none of the players are artists, and I found it to be the weakest in the package. It may be a lot more fun with more than 3 players, but with only a few people it’s not one I want to go back and play as frequently. It is still hilarious though, and I will never forget the tale of Too Many Knives Johnson, champion of Murder. 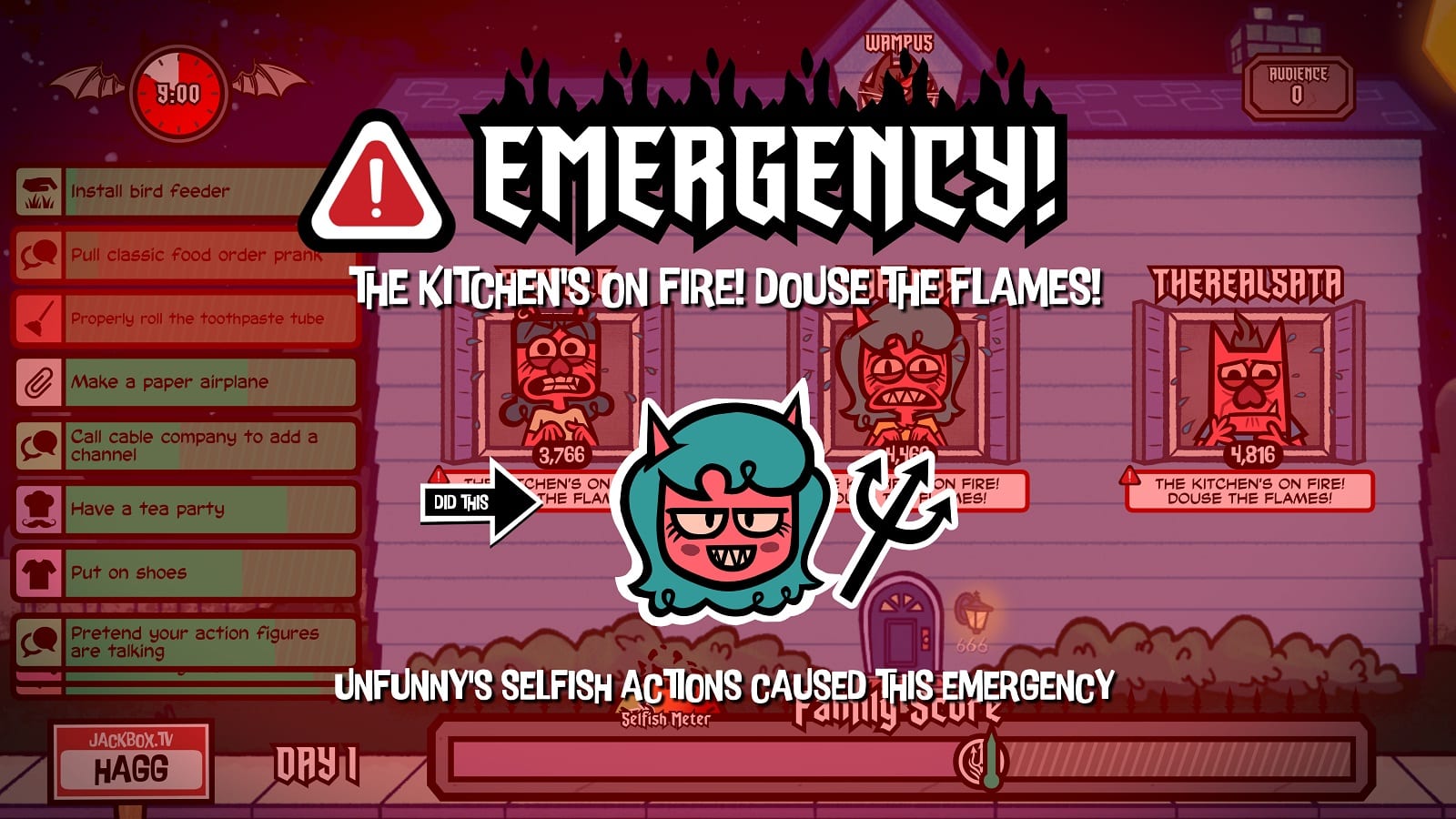 The Devils and the Details (3-8 Players) is the most chaotic of the bunch. Each player takes on the role of a member of a family of Demons trying to live a normal human life. While the household has a shared goal for each round to fill up the Family Score and not get sent back to Hell, individually they’re all competing to get the most points. Choosing a household task, such as ordering pizza or driving to the hardware store, will start a minigame on your device to complete by tapping, holding, and swiping. Some tasks may take multiple people to complete, one may need to read directions to another, so players will have to frantically coordinate and help each other. The most points are awarded by selfish actions like watching TV, however if too many people do selfish tasks it will eventually decrease the family score, which needs to pass a certain threshold to progress to the next level. Other players can stop your selfish actions too, so all of this really emphasizes the co-opetition aspect. It’s basically like multiplayer WarioWare and quickly becomes hilariously chaotic with players yelling at each other to help with tasks. While my group may have kept quiet during Blather ‘Round, in this game no one stopped talking. While it is a ton of fun, I would steer people away from playing this with a laptop or other PC, since the gesture controls don’t register very well with a mouse.

Finally, we have Quiplash 3 (3 – 8 Players). In this, players come up with quips in response to phrases. Two quips in response to the same phrase are pitted against each other while other players vote for their favorite, and whoever has the most points at the end wins. It’s exactly the same as the previous two iterations, but more and with a nice, clay looking art style. There’s a reason they’ve brought this game back once more, and that’s because it’s always hilarious. There isn’t much to say here other than it’s just as fun as 1 and 2.

Jackbox Party Pack 7 is yet another fantastic party game with something for everyone. While Talking Points and Blather ‘Round are the highlights here, every game is still bundles of fun. I wonder, does Jackbox Games get tired of putting out banger after banger every year? Because I’m sure not tired of their innovation and creativity.

David is the kind of person to wear his heart on his sleeve. He can find positives in anything, like this is a person who loved Star Fox Zero to death. You’ll see him playing all kinds of games: AAAs, Indies, game jam games, games of all genres, and writing about them! Here. On this website. When not writing or playing games, you can find David making music, games, or enjoying a good book. David’s favorite games include NieR: Automata, Mother 3, and Gravity Rush.
Related Articles: Indies, The Jackbox Party Pack 7
Share
Tweet
Share
Submit