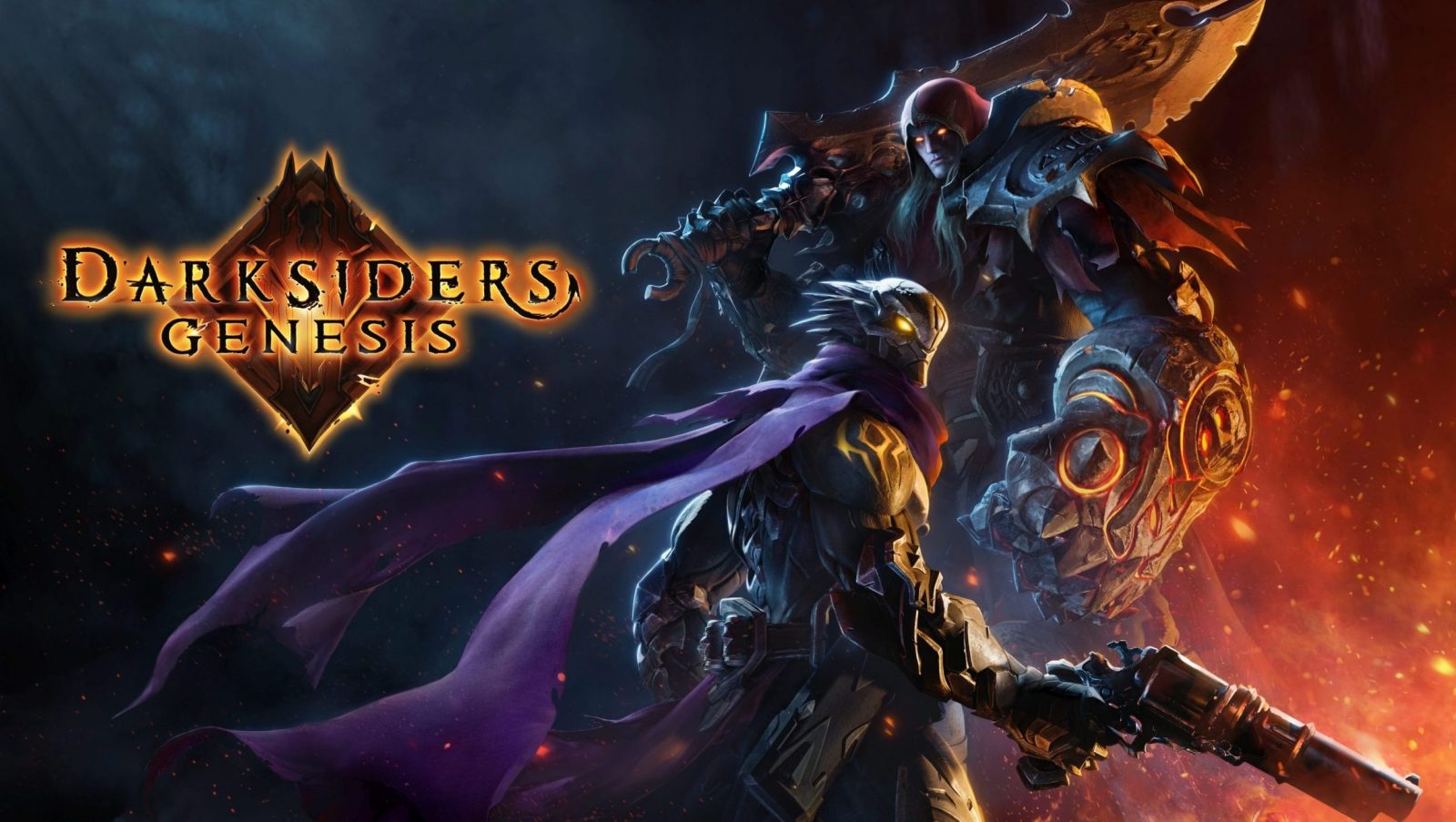 I want to be clear from the start, I really enjoyed this game. So much so that I will not spoil any of the dynamic story you’re going to experience when you pick this up. What I will do is give you some insight as to how Darksiders Genesis might be my sleeper hit of the year. By now, we’re all familiar with the Darksiders series and the Four Horsemen of the Apocalypse: Death, Fury, War, and Strife. With the series putting those characters at the forefront of their own story, and each game having similar playstyles, it was time that Airship Syndicate and THQ switched up their styles and took the gameplay in a different direction. You’ll still be hacking and slashing your way through legions demons at the Council’s bidding, and you’ll be doing it in style as the gameplay, art-style, and game mechanics have vastly changed. With Darksiders Genesis, Airship Syndicate and THQ have chosen to bring some quality of life improvements to a series that had grown long in the tooth.

From the opening cinematic, Darksiders Genesis goes in a different direction where it feels more personal and more with the times. Opening with the Horseman, Strife, entering through a massive door that gives perspective to how grave his undertaking is about to be, he strolls down a long, runway-like corridor with demonic eyes following his every step. And who is he there to see? Well it happens to be Malgros the defiler – a three-headed hell spawn that despises the Horsemen. Resembling Jabba the Hutt in Return of the Jedi when Luke confronts him, Malgros makes it very clear that the Horseman’s head on a platter. This is where the game takes a step in a different and much needed direction by adding levity and some Deadpool-ish charm to its story by way of Strife and his banter. No longer being a story that’s dark and gloomy where the battle between demons, man, and every evil deity that the designers could think up; it pulls off an in your face, whiplash action scene that shows you what happens when a Horseman pays a visit. 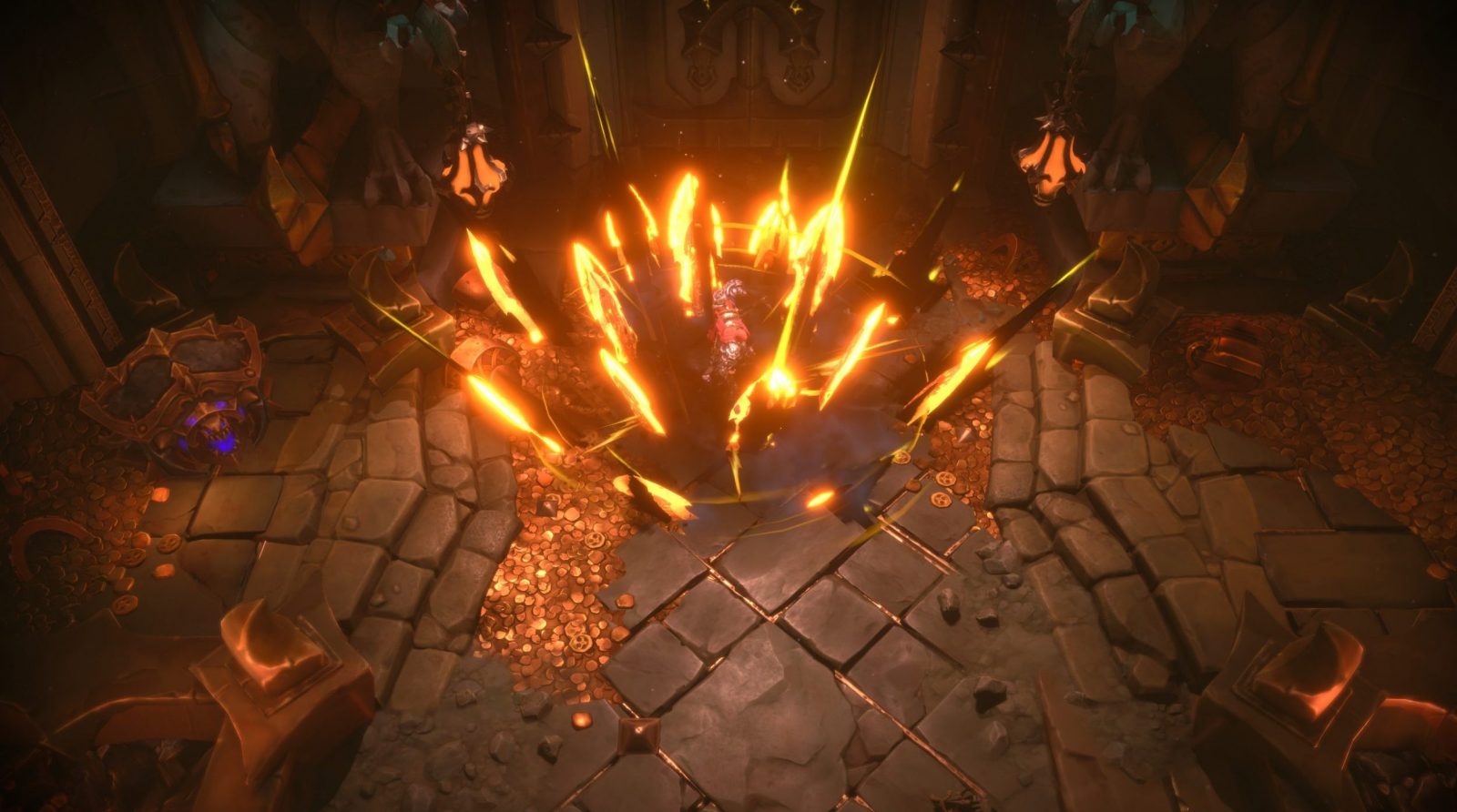 Wars on a mission

As I mentioned, the developers injected some new life into the Darksiders series with Genesis. It goes far beyond the witty and comical banter between Strife and War, oh, did I mention that War is your kick ass partner through this hellish adventure? Together, they bring a yin and yang companionship – an “I’ve got top bunk and you’ve got bottom bunk” brotherhood to the game. At its core, it still feels like a tried and true Darksiders game, but infused with a touch of a Torchlight, Diablo, or Path of Exile game. Don’t let that deter you, from the moment I played Darksiders Genesis, I was blown away by the subtle, yet necessary changes that were made to give this series a kick in the ass. It truly makes the series feel brand new, yet familiar. It took the aerial view, attack mechanics, enemy types, and cinematics of what we are used to seeing in action-RPG dungeon crawlers and put their spin on it. The art-style and design has also taken a tick up as the levels and character designs have been revamped to meet the story and game style. Depending on the level, the color palettes allow for objects which can be interacted with to stand out and give the world a great sense of depth. In the dungeon areas, the game takes on a beautiful gray-ish blue hue, allowing explosions, gun fire, and other bombastic moments on screen to pop and reassure you that you are an agent of destruction.

As far as the gameplay and story, much has changed there as well. The story feels more engaging as the dialogue between the Horsemen is more frequent, giving players an even experience with gameplay and story. Once you jump into the game, you learn that the ruler of hell and bastard of all that is evil Lucifer, looks to reign supreme over all by obtaining the Ember Core, a source of power greater than 1,000 suns. The Council has dispatched Strife and War to put an end to this devious plot – but all is never so easy. After listening to some jovial banter between the Horseman, you drop into a beautifully crafted, desert-like world that feels as if it were carved from clay and handmade – it is a gorgeous sight to behold. Upon dropping into the world, you’ll realize that you can play as War or Strife at any time, on the fly, giving you the ability to wreak havoc on a massive level. Combining their attacks will level a New York City block, so as you begin to level up, be mindful of how to utilize the Horsemen’s abilities. With Mercy and Redemption, Strife’s trusty hand-cannons in his grip, and Chaoseater, a massive sword being wielded by War, little can stand in your way as you track down Lucifer. Defeating enemies will net you the usual health drops, souls, and other items that can be used to increase your health bar, add new offensive attacks, increase strength, and other benefits that you’ll need to defeat some of the massive bosses. But because this is a Darksiders game, don’t look to collect a bunch of loot and random weapons like your typical dungeon crawler. Instead, you’ll collect health, souls, items to level up each Horseman, and even some that will aid you later in the game. 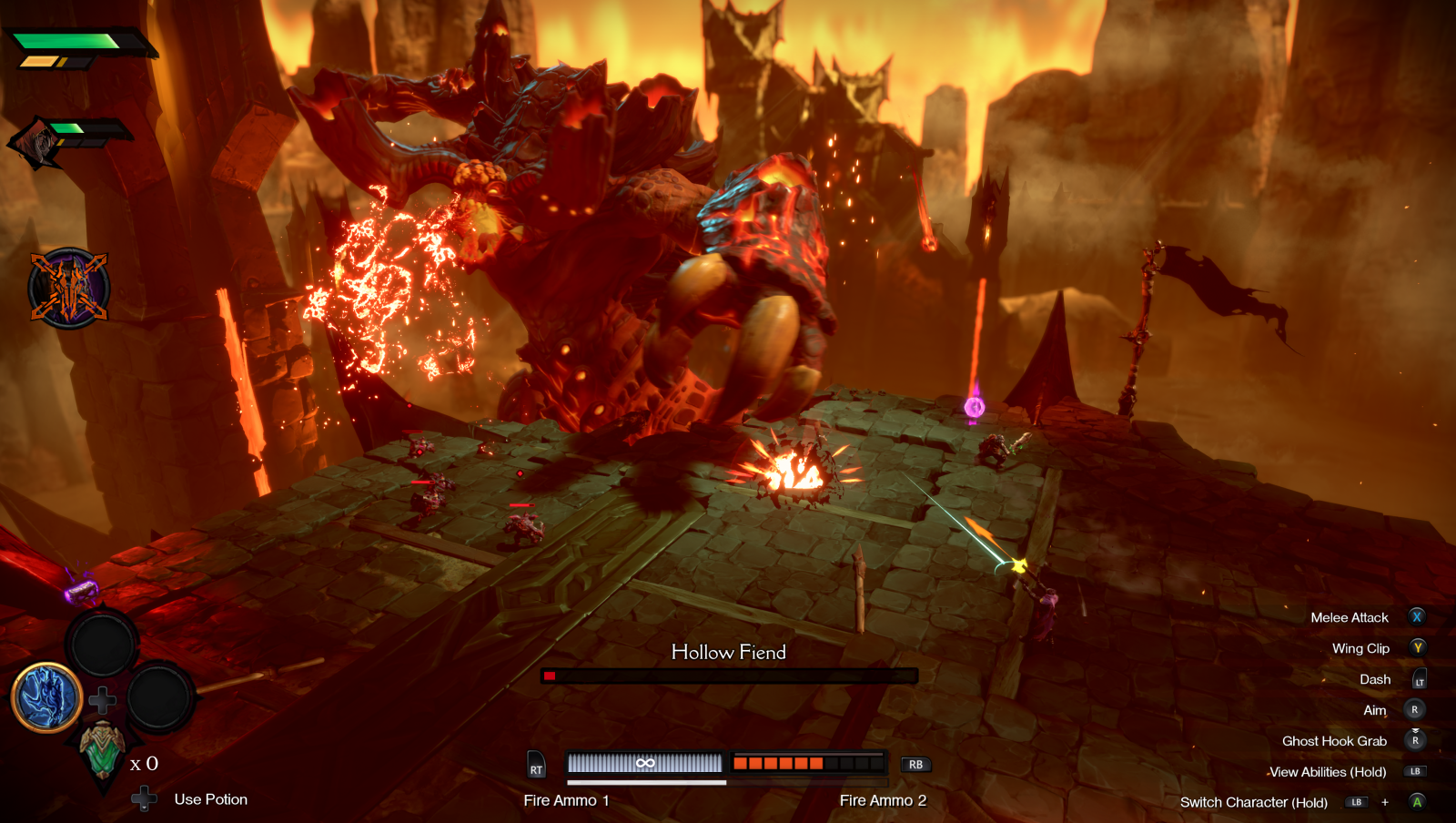 A Fiend from Hell

Now what would a Horseman be without their trusty steed? Each Horseman can mount their steeds and traverse the wide-open worlds that beckon to be explored. Enemies also stand no chance once you are on your mount as you can burst through barrages of minions with ease, knocking them on their asses and even off cliffs. But be warned, you can easily be knocked off and left to fight off that barrage until your horse meter returns and allows you to mount your steed. The offensive abilities take center stage in Genesis, not only because of the ability to level them up rather frequently, but because the new play style allows you to move and attack in ways you never could before. In previous Darksiders games, you could find yourself easily overwhelmed and dying over and over by simply confronting a lone hellion. But in Genesis, like many dungeon crawler style games, you get to take full advantage of an onslaught of attacks because enemies can come in waves from any direction. Some aspects of the game take on a platforming mechanic, asking you to reach new heights and hidden areas.

Many returning players will find those familiar characters and moments that make this a true Darksiders game. Vulgrim makes his appearance as the sniveling merchant that simply wants to take advantage of your current predicament, and yet helps you succeed. There are also new and exciting ways to play with friends, even while in game. While cutting down and mocking the demons you’ve been slaying in droves, you’ll come across Summoning stones – which allow co-op story play or co-op special missions. Unlike the previous iterations of the game, the developers saw a world where playing together in this dungeon crawler-like game only makes for a better experience – and it pulls it off in dramatic fashion. 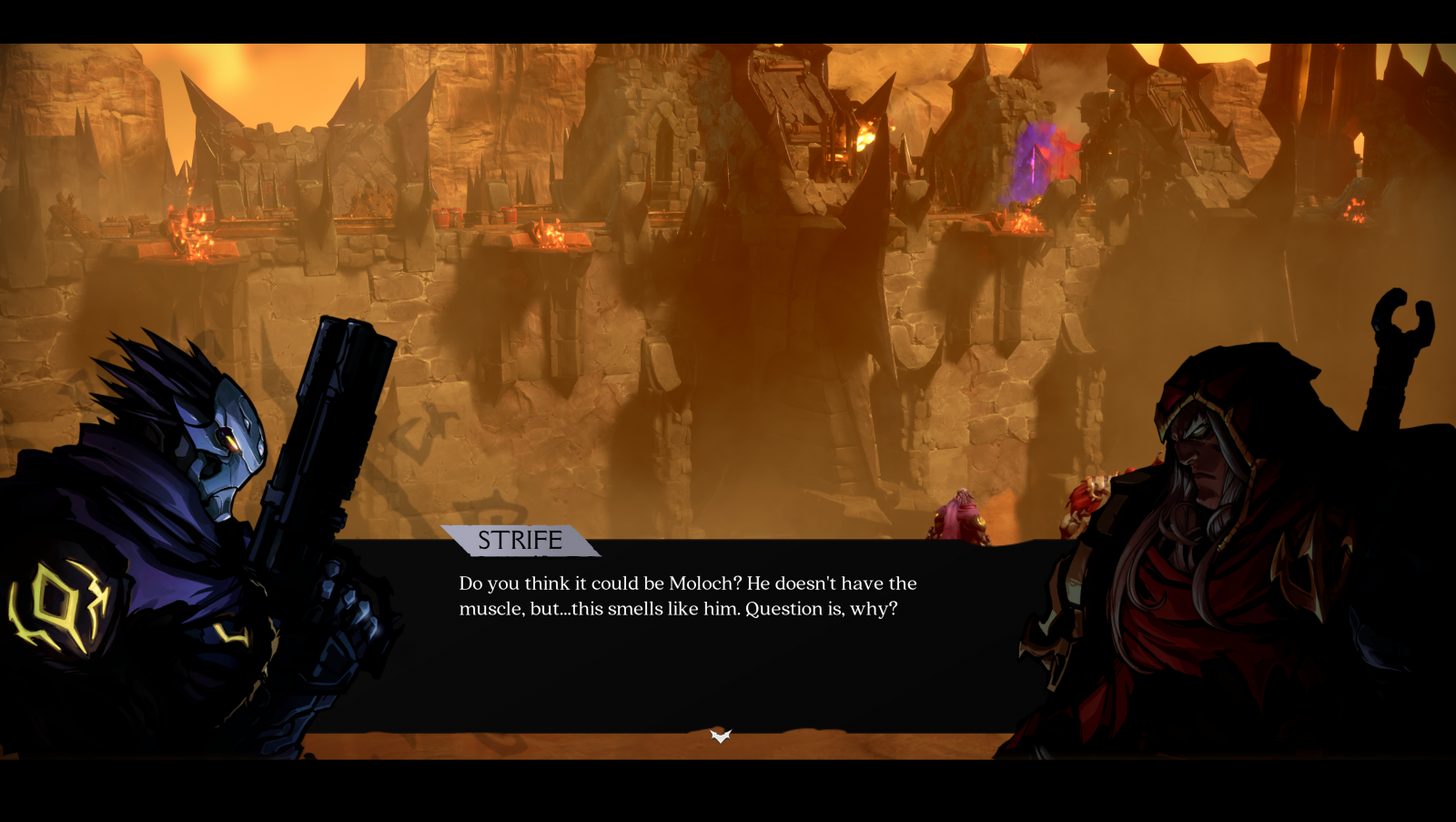 A new way to talk

Like all games, there are a few hiccups and oops moments that will not go unnoticed. Because of the aerial camera view, my view of my Horseman was often obscured by some object in the foreground that always appeared to be in my way at the most inopportune moment. Also, too many times I was close to the edge when jumping or riding my horse and I simply fell off the plane to my untimely death. There seems to be areas where the physical plane that’s considered the playable area ends, and the design of the level makes it appear as if you can continue to explore. Either way, it’s happened to me enough where I’ve found it a nuisance.

Darksiders Genesis is by far the best game in the series. As someone who has played all of them, I can honestly say that this is more than a hack and slash game where you slay demons, but a kick-ass demon slaying game that has found new life by remixing what it does best and incorporating the best features of other games to create something new in the series.

T.K. is a freelance writer, narrative designer, and author. Writing and developing narratives and giving voices to digital world and characters is his passion. As a game writer, QA game analyst, and editor for Gaming Trend, he enjoys being a part of the gaming industry.
Related Articles: Darksiders Genesis
Share
Tweet
Share
Submit