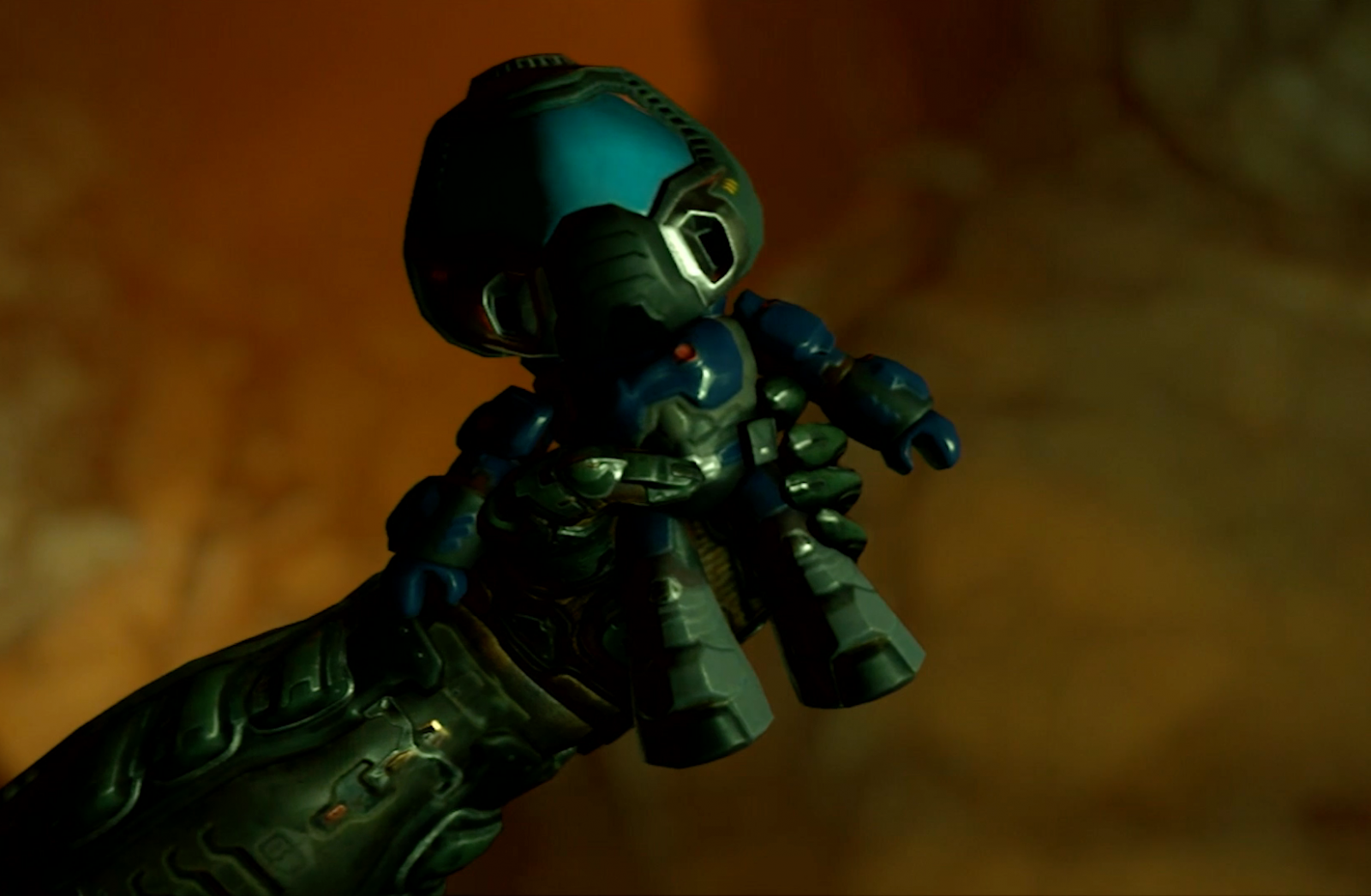 Last year’s Doom was a nostalgic treat, an old-school frag-fest that evoked some of my favorite shooter games of yore while at the same putting my new high-end PC through its paces. Every pump of the shotgun and crack of a spine as I waded through gibs of demon guts with a huge maniacal grin on my face felt perfect on my powerhouse rig, a perfect hot-rod gaming experience if there ever was one. It was inevitable that I would revisit Doom at some point, I just had no idea I’d be doing so on the Switch, and I sure as hell didn’t expect to enjoy it so much on a less muscular platform.

“He’s got the power of an upright in his goddamn hand!” – Gibby Haynes

Make no mistake: this is Doom. All of it. The Switch version doesn’t scale down the level design, leave out any features, or alter the gameplay in any way. The grin started to creep back onto my face almost immediately as I barreled through the first level, that familiar industrial thump of the soundtrack rising up from the tiny speakers. Nearly everything I loved about the PC version made it over intact, and I was playing it on a handheld.

As with the PC version, the stellar single-player campaign is the highlight of the package. Every level and boss fight plays exactly the same, and Ron’s assessment from last year still stands. Surprisingly enough, the multiplayer component is exactly the same as well, and it felt more than a little strange to jump right into a match without fussing with friend codes or the typical hoops Nintendo has required of online play in the past. As an added bonus, all of the multiplayer DLC for the game has been included in this release, with one notable exception: Snap Maps (Doom’s level editor). While I think this would actually work quite well using a touch screen for map construction, it’s more likely that Nintendo’s online service and the lack of ability to share content is the reason for this feature’s exclusion rather than any hardware constraints. Just like the PC version, however, the online multiplayer just didn’t grab me like the campaign did, even with all of the added content.

This is not to say that compromises weren’t made. The Switch just can’t put out the same level of graphical power that a high-end PC can, and we shouldn’t expect it to. Resolution has been downgraded to 720p, and the framerate is a fairly consistent 30 fps, though that will dip occasionally when there are a LOT of enemies on the screen and even then the issue is somewhat mitigated by the game engine’s impressively smooth motion blur effect. Texture and particle effects have been significantly downgraded, which is considerably more noticeable when docked. Curiously, it doesn’t appear that the menu UI or HUD was optimized for the smaller display, and the tiny text and buttons mar what is otherwise a pretty solid presentation. Even with all of those concessions, the game looks and plays astonishingly well in handheld mode, and even after several hours of play I was still pretty amazed at the fact that I was playing this AAA game on a portable device.

There is a bit of a conundrum when it comes to controls, however; The short, stubby control sticks and dealing with the triggers on the joycons while attached to the screen made for some relatively quick hand-cramping. Removing the Joy-Cons and playing with one in each hand was a little better, but eliminated the convenience of having it all in the palm of your hands. Naturally the Joy-Con grip and pro controller provided the precision and ergonomics that a console shooter demands, but I couldn’t help but think that I’d just as soon play on PC or the PS4 as opposed to the docked Switch. Of course, it is nice to just pick up and go when my kids kick me off the TV…

Bethesda pulled off quite the trick with Doom, giving us the first real AAA third-party game experience on the Nintendo Switch. What it lacks in graphical power, it makes up for in portability, and the fact that the complete, unadulterated campaign and multiplayer modes made it over intact is an achievement other studios should take note of.

Mike Dunn is the old man of Gaming Trend, having cut his teeth on Atari consoles and First Edition Advanced Dungeons & Dragons back in the day. His involvement with Gaming Trend dates back to 2003, and he’s done everything from design and code to writing and managing. Now he has come full circle, with a rekindled passion for tabletop gaming and a recent debut as Dungeon Master (nearly forty years after he purchased the original DMG).
Related Articles: Doom
Share
Tweet
Share
Submit