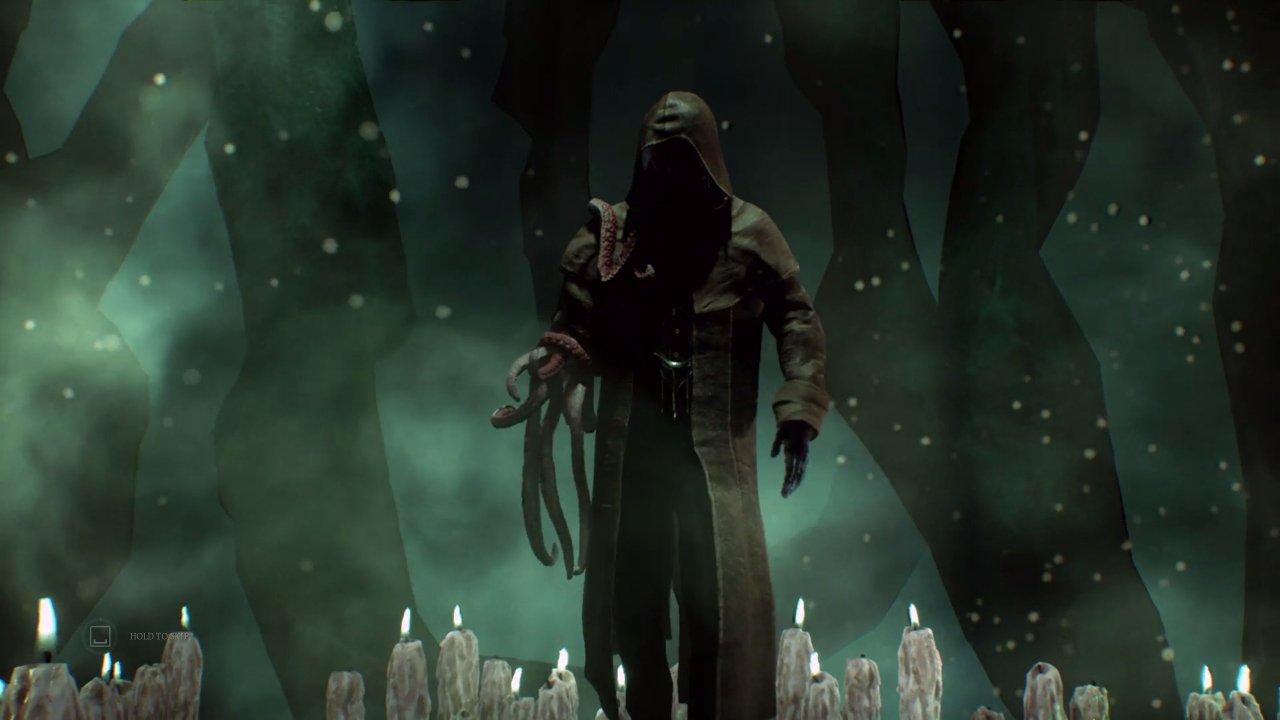 Call of Cthulhu is a slow burn horror/detective RPG. There isn’t a horde of monsters or jumpscares interrupting the gameplay every couple minutes. No, instead it relies on atmosphere and intrigue to form a compelling narrative that had me mesmerized like the call of a particular cosmic horror.

Call of Cthulhu starts with detective Edward Pierce accepting a case to go investigate the death of the Hawkins family. This takes him to the small island of Darkwater off the coast of Boston where he quickly learns there is far more to the death of the Hawkins than anyone suspected. As Pierce continues his investigation the player begins questioning his sanity, what is happening, and what is in his head.

Speaking of sanity, Call of Cthulhu has a sanity meter to keep track of just how well Pierce is coping with the haunting experiences he comes across during his investigation. While these meters can feel tacked on at times, it makes sense in an H.P Lovecraft-inspired world and is implemented well enough. Being insane forces you to question what is really happening, but also opens up new options as Pierce’s mind has opened to more possibilities.

If you go into Call of Cthulhu expecting a monster mash, you are going to be very disappointed. First and foremost this is a detective RPG that uses the horror setting more for atmosphere and story purposes. At the beginning of the game, player’s have to ability to level up Pierce’s skills which include: strength, eloquence, psychology, investigation, spot hidden, occult, and medicine. These different skills impact the different ways to solve puzzles and which clues Pierce is able to find. You level them up throughout the game by gaining CP for progressing the story or finding hidden clues. Medicine and Occult, however, cannot be increased by CP. These two skills can only be raised by finding books and items in the environment that raise them up slowly. This is a nice system that encourages full exploration of the different locals.

Call of Cthulhu is a masterpiece in terms of atmosphere.

Along with skill books and items, there are a few lore items scattered around. These are where Call of Cthulhu fall a bit flat. Finding books and letters tends to just have Peirce give a cliff notes version of what it says. I found a few different books of monsters and it would have been awesome if they gave more in-depth description of the creatures. The cliff notes version gets the point across, but doesn’t build up the world properly.

While most of the game involves searching for clues and solving puzzles, there are a few stealth sections for variety. Segments where you’re hiding from a creature or asylum guards are where stealth is pulled off well. The asylum section in particular is a highlight; it is very open-ended, with guards patrolling and a variety of different ways of completing your task. It encourages exploration and rewards the curious player by offering more options. The puzzles themselves also tend to be interesting at the very least. They can involve wandering in the dark looking for specific marks on the ground to destroy with your lantern to listening to recordings for clues to the combination of a safe. There is plenty of variety in the puzzles and they use the dark and haunting atmosphere to its fullest.

Like a cult trying to get you to summon a cosmic horror, there are a few downsides to Call of Cthulhu. When a monster does appear, it is often anticlimactic. I honestly think the main threat appears twice in the game and both times he just hunts you down as you complete a task such as grabbing a dagger to send him back or destroying glyphs so he loses his grip on this dimension. These tend to throw the clever puzzles out the window and instead just have you search for an item while being hunted. I do like how just looking at the creature drives you insane. I also appreciate that you are just trying to banish the creature, not kill it. It adds to the feeling of panic since Pierce is clearly out of his depth when it comes to these creatures.

It wouldn’t be Lovecraft without a cult.

The graphics really could have used some work. I like the tone and art style, but these graphics are really out of date and hurt the visual performance. Thankfully, Pierce’s vocal work is spectacular enough to make up for the visual shortcomings. Vocal work is strong across the board, but Pierce is stands out in terms of quality. Although, he does tend to get annoying when he repeats the three same lines as you are exploring. This is a pretty common if you try to explore with someone else there. They repeat the same three lines of dialogue telling you to hurry up and it gets very annoying at times.

Call of Cthulhu is a thrilling experience from start to end. The monsters may be a little lackluster, but the writing, puzzles, and characters are all interesting enough to keep you going until the very end. While the graphics are disappointing, the art style, vocal work, and atmosphere do enough to make up for it. Fans of horror or mystery will find plenty to love here.

Call of Cthulhu is a thrilling experience from start to end. The monsters may be a little lackluster, but the writing, puzzles, and characters are all interesting enough to keep you going until the very end. While the graphics are disappointing, the art style, vocal work, and atmosphere do enough to make up for it. Fans of horror or mystery will find plenty to love here.

Austin Fern has been playing video games his entire life. The first console he truly fell in love with is the PlayStation 2 with Sly Cooper, God of War, and many others really leaving an impression. He enjoys all genres of games from FarCry 5 to Danganronpa and everything in between.
Related Articles: Call of Cthulhu, Let's Play
Share
Tweet
Share
Submit