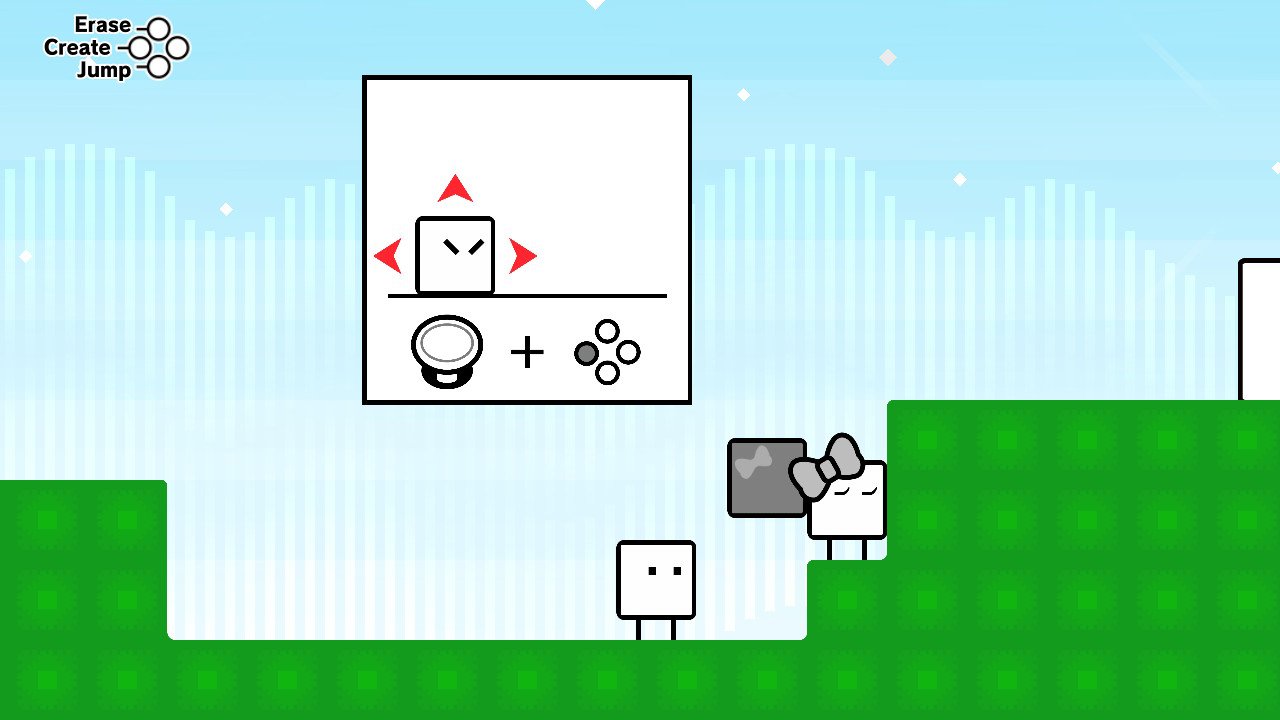 If you ask me for my favorite Nintendo series, you might be surprised that I’d probably lump the BoxBoy! franchise of games up there with the Rhythm Heaven and Paper Mario games. Their simplistic yet innovative puzzles (at an affordable price, I might add) were a wonderful fit for the eShop, and my last review clamored for a Switch release. It seems like Nintendo has heard my cries, as BoxBoy! + BoxGirl! has finally made the switch to a home console, and with it, some creative levels featuring the same adorable boxes we know and love. 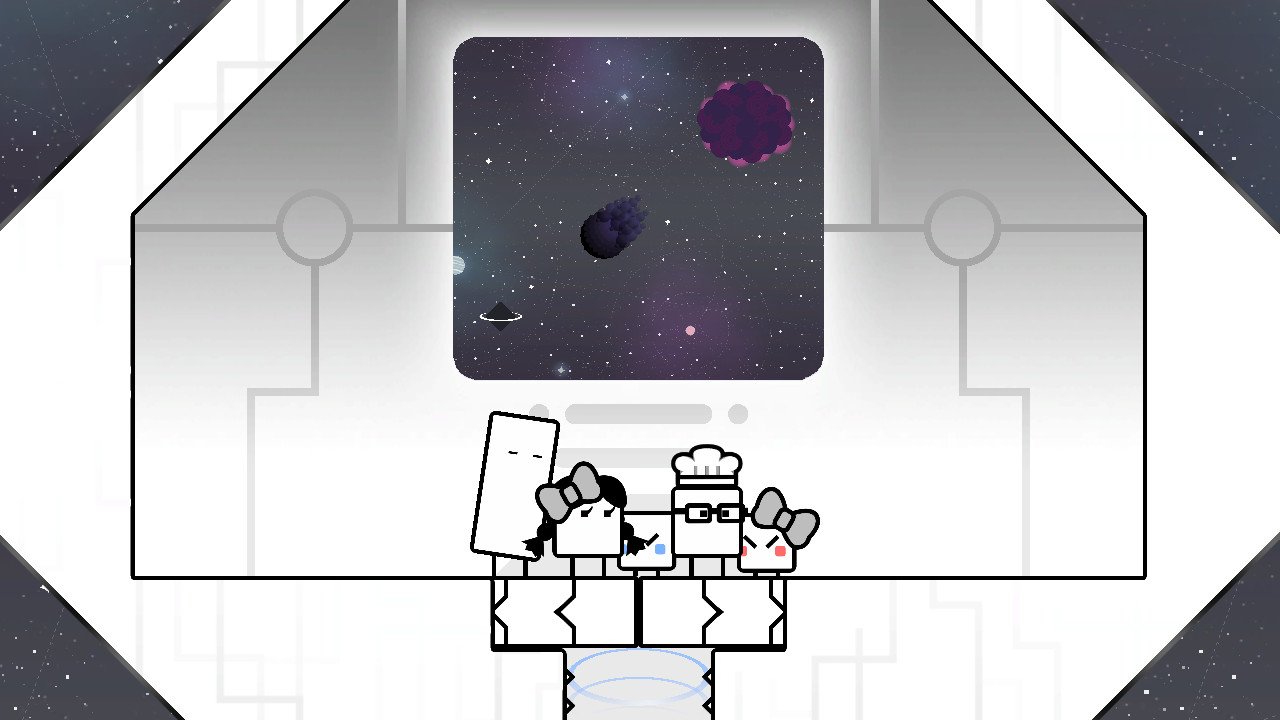 BoxBoy! + BoxGirl! starts off with protagonists Qbby and Qucy trying to save their world from yet another cataclysmic event (which, oddly enough isn’t the first time in the series) as they traverse different worlds. Along for the ride are good friend Qudy, and the Qbabies as you rescue them from an ominous force. The story, as always, takes the backburner to gameplay, but I’m always surprised by how much emotion and detail goes into these brief wordless interactions.

Getting to the meat of the gameplay, you control Quby (or Qucy) with his ability to create 1×1 blocks out of thin air. The maximum number of blocks he can use in a stage is displayed during the start of the level. You can only make one set of blocks at a time, as making a new one will overwrite the existing set. Qbby is rather weak (having a pitiful jump ability and exploding on contact with any hostile object), so block placement is imperative to success. 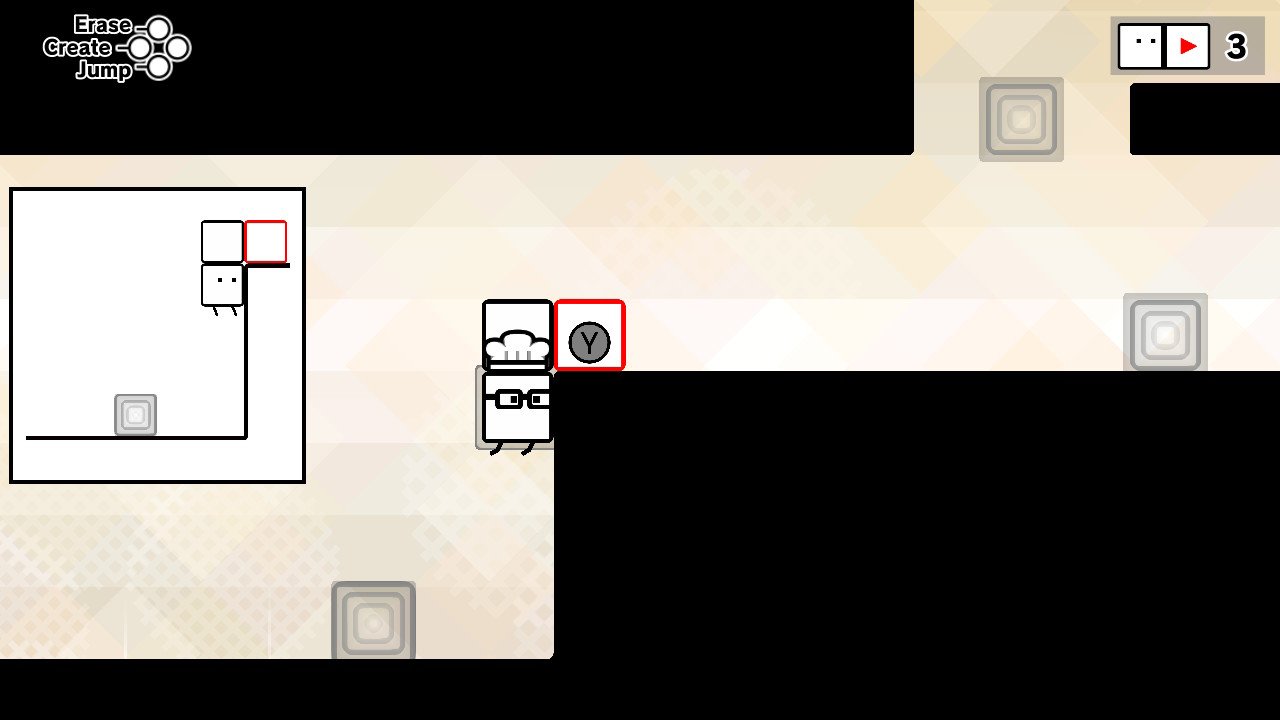 While this sounds simple enough, the series always finds innovative ways to use this, and you’ll do things like make bridges to walk across spikes or hooks to latch onto ledges. While this premise should start getting stale the fourth game in, BoxBoy! + BoxGirl! features some new mechanics later in the game, like the ability to throw blocks away from you to open switches or using blocks as a way to jump over dangerous terrain. These new mechanics flesh out the game organically and even creates a natural evolution to a series as a whole. 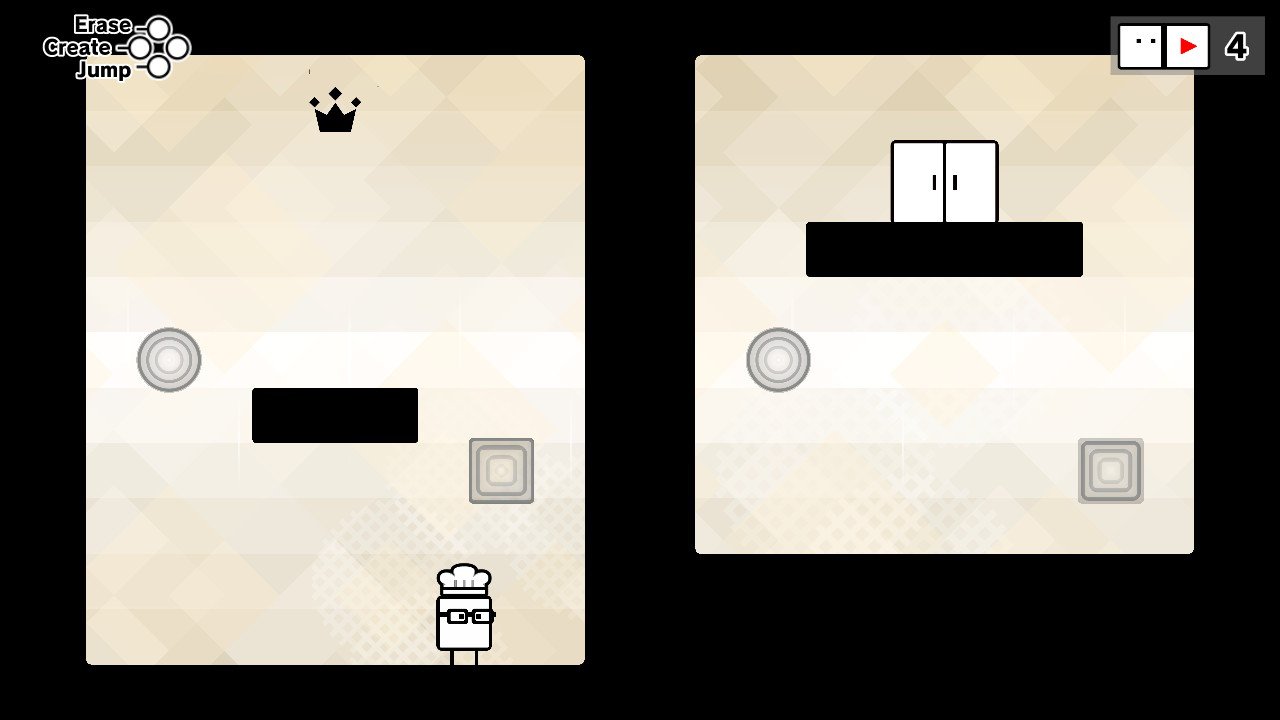 This evolution goes a step further with the inclusion of Qucy, the female counterpart of Qbby who you can use in the main story mode (switching on the fly instantly). as well as the second player in the new two-player campaign. Put simply, this mode is why BoxBoxBoy! should have been, as it involves two players relying on each other to create block sets to get through levels. Unlike BoxBoxBoy!, this mode is a little easier to manage since blocks are dependent on their creator, rather than disappearing in the order you created the sets (decreasing the frustration I experienced with the former title). 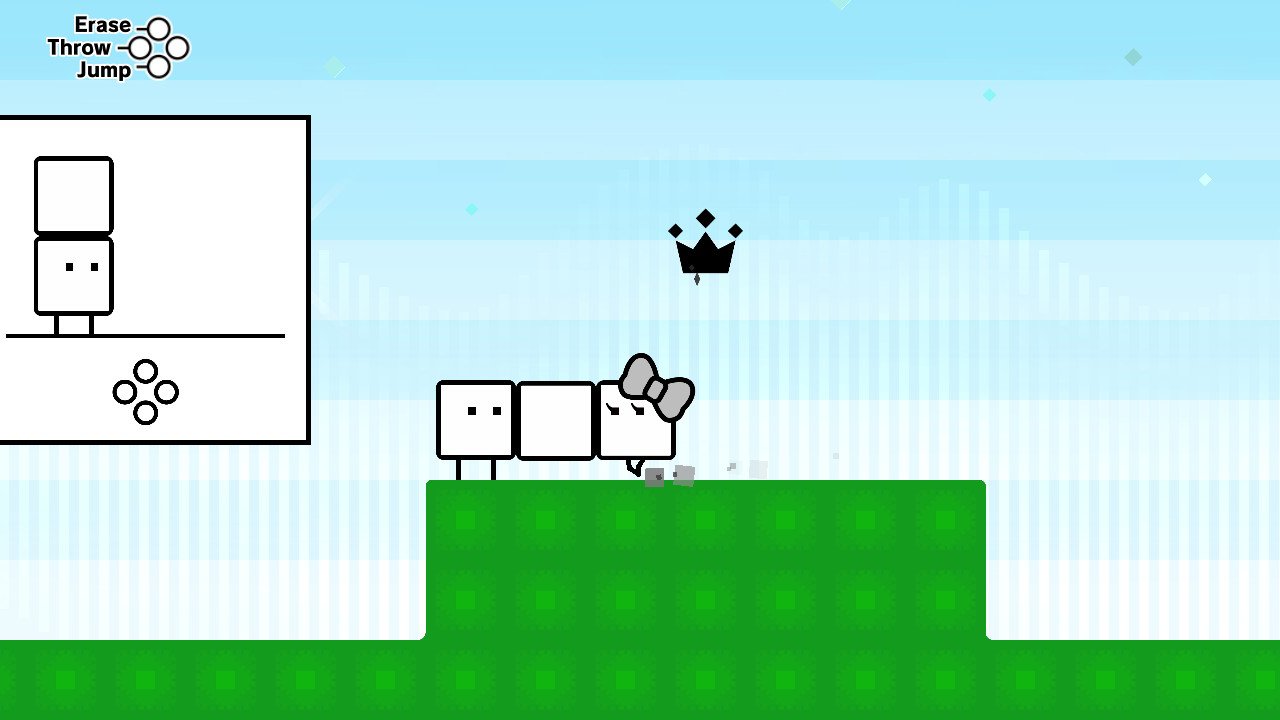 While the two-player mode can get complex, the fact that this is a relatively relaxing experience with unlimited retries make this more of a Snipperclips experience than something like Joggernauts. I only played a few levels with a friend, but it was a fun communication exercise that encouraged cooperation rather than competition. You can also play these levels by yourself, switching between the two characters at will, which is less fun than having a human partner by your side, but still a functional way to experience these exclusive worlds.

Speaking of complexity, this game is perhaps the most mentally taxing of the series. Hints for each level are given at a pittance (worth one coin, which you can easily earn by playing the game), but later levels will still assume you know what you’re doing with the mechanics. The learning curve here is relatively steep, causing some difficulty spikes that come off as uneven in later levels of some worlds. This does come with the consequence that it might not be as beginner-friendly as the 3DS titles, but for those looking for a challenging puzzle title, there are few puzzle games that offer a better experience. 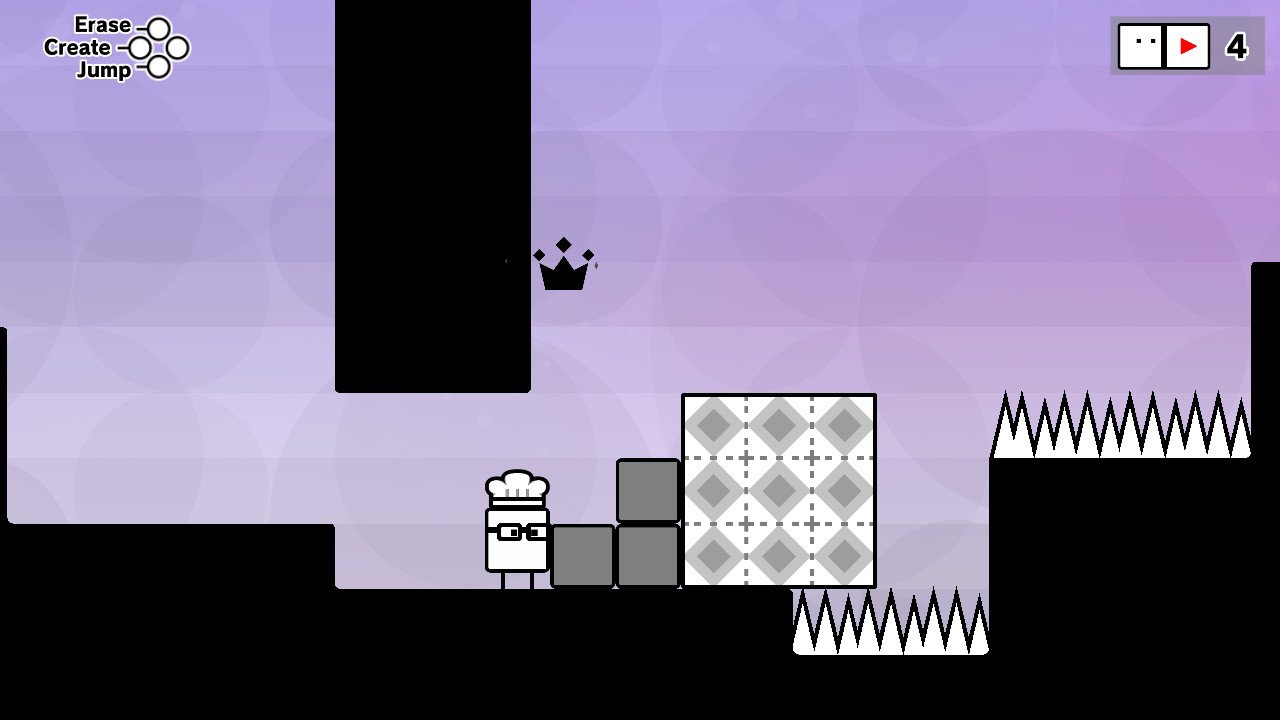 A much-needed change with BoxBoy+ BoxGirl! is how much content is packed into the title. While retailing at twice the cost of the 3DS entries at $9.99, with it comes hundreds of levels across dozens of worlds, plus a bonus campaign with loveable long boy Qudy once you finish the main quest. This means that worlds are slightly longer than the handheld counterparts, with more complex ideas introduced in the late stages of the game. The additional levels make this game feel like a complete package rather than an incremental entry with marginal improvements. There are crowns scattered around levels, though now there are two achievements linked to full completion (getting all crowns and finishing within a certain amount of blocks) rather than just one. Even as a BoxBoy! veteran, I spent a bit longer on some earlier levels trying to devise a way to grab both achievements in one go; thankfully, you can replay levels within a world and don’t have to strive for both on one try. This is a godsend, as the level design is adamant on perfect play if you want to get both achievements simultaneously; this leeway is appreciated. 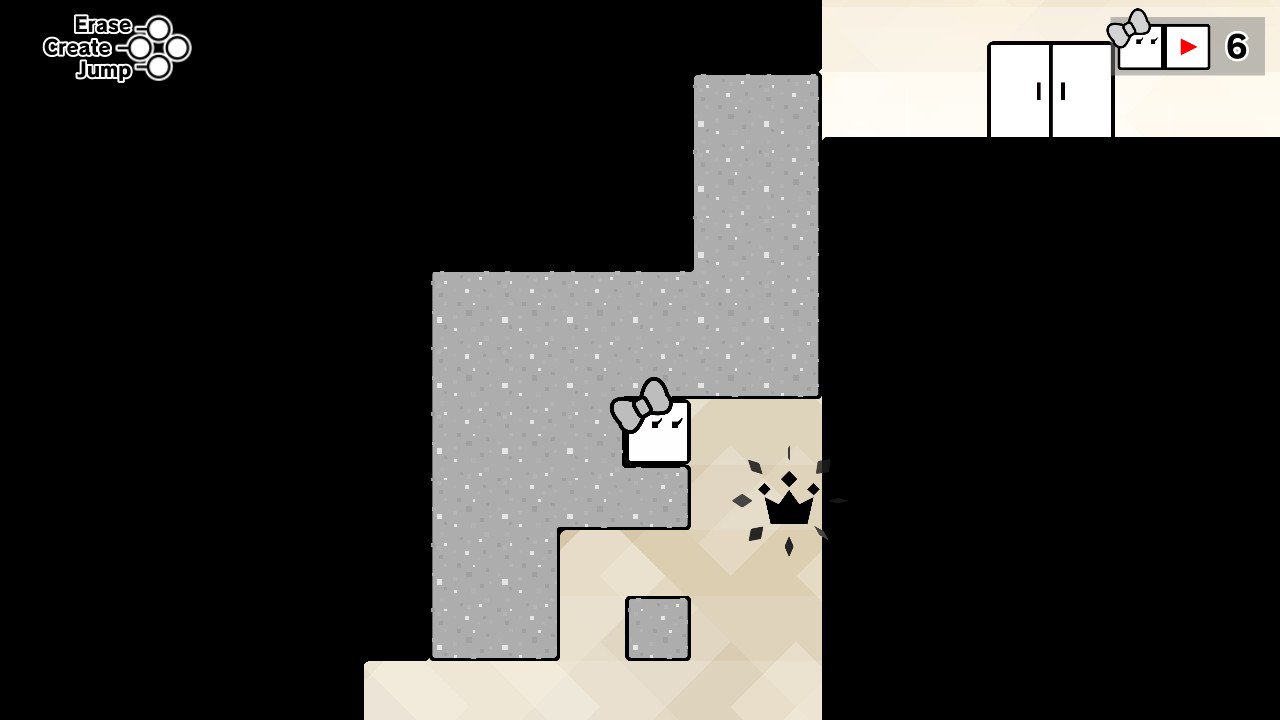 In regards to the presentation, the game is rather hit-or-miss. The trademark 2D  aesthetic is present and pops out pretty well thanks to the graphical improvements of the Switch. I really enjoyed how the BoxBoy! series transitioned pretty well, but there is unfortunately some framerate slowdown which becomes quite apparent in handheld mode. They don’t affect puzzle solving, but they are noticeable when walking around levels. A complaint I had with the previous game was the soundtrack, and while it’s revamped here, it’s not as spectacular as I would have hoped.

BoxBoy! + BoxGirl! takes the puzzler series to new heights with the first Switch BoxBoy! entry. With an innovative spin in the form of fresh new mechanics and the playable inclusion of another loveable boxy character, this eShop title will brighten up any puzzle fan’s day.

Elisha Deogracias is an aspiring accountant by day, freelance writer by night. Before writing for Gaming Trend, he had a small gig on the now defunct Examiner. When not being a third wheel with his best friends on dates or yearning for some closure on Pushing Daisies, he's busy catching up on shonen manga and wacky rhythm games. Mains R.O.B. in Smash. Still doesn't know if he's a kid or a squid.
Related Articles: BOXBOY! + BOXGIRL!
Share
Tweet
Share
Submit