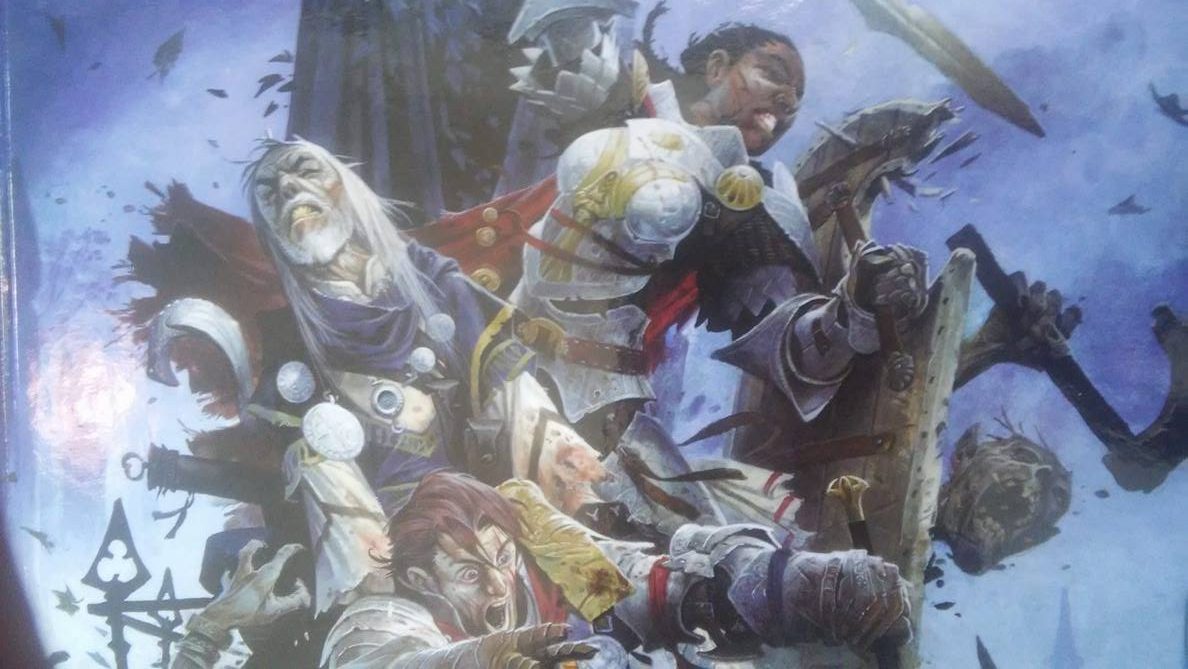 Continuing in a recent trend of expanding Pathfinder into new genres, Horror Adventures takes us to the untouched territory of fear. Sure, we’ve had adventures with grisly themes and Occult Adventures’  own resources for unsettling players, this is the first dedicated release with horror as a main focus. As soon as I heard about it, I found the concept profoundly counter-intuitive. Pathfinder is a game about heroes. During play you feel powerful, emboldened by your growing abilities and the magical tools that help you achieve your goals. Horror is diametrically opposed, centering on the fear of powerlessness and the moral ambiguity that accompanies a fight for your own survival. Wanting to be fair and give the book a chance, I let the writers speak for themselves. The defense they offer?

“[T]he Pathfinder Roleplaying Game is not designed with horror in mind.” They then go on to explain that the basic structure of the game will not change. Getting loot, slaying monsters, and winning are all still primary features, with new obstacles placed in the way of the players. Essentially, the message is that a Pathfinder horror game cannot function unless it accepts the fact that it is not a horror game. This is a concession I am loath to make, especially with the excellent number of fantasy horror games already available that do not make this sacrifice. I was resigned to the belief that I could do little else than see how bad it got, but over the course of the read-through became pleasantly surprised.

The opening Fear and Sanity rules are lackluster. Both function precisely how you would expect (and have probably house-ruled already) except with an extra layer of complexity. Fear expands upon existing fear level rules but gives you a number of penalties to keep track of at every level upon failing a Will roll. These effects are broken into minor and severe effects based on the level of fear. Characters also have a Sanity score equal to the sum of their mental attributes. Then the bonus of the highest attribute is the Sanity Threshold, which must be overcome to grant a madness, which is distinct from your Sanity Edge, that determines the severity of your madness. Already this is too much to keep track of, despite the fact that the system otherwise works as you would expect if you have played around with other games’ sanity systems. I appreciate that this is written officially and in one place, but I am not particularly excited yet.

That tune changes when I read the Madnesses themselves. While these are types you have likely seen before, such as schizophrenia or amnesia, the creativity with which they are presented makes them rife for roleplay adventures. Any character bearing these madnesses will be fascinating to play. The debilitations are not lazy penalties, nor do they trivialize mental illness.

Except for one or two awkward pieces, the art in Horror Adventures is truly above and beyond. Adventure, fear, and violence are all treated with perfect and contracting tones in these paintings

This positive trend continues with Corruptions, which are various torments that can empower or consume a character depending on their actions. Each one grants a number of benefits that also mark you as touched by dark power. Succumbing to the temptation of your Corruption (drinking blood or committing an evil act, for example) will cause you to slip further into darkness, until at the final level you lose control of your character completely. Whether lycanthropy, possession, or cursed by the realm of shadow, these Corruptions are deep enough to form entire character concepts, and spawn dozens of adventures on their own. It still nags me to know that these concepts have been covered better elsewhere. After all, if I want to challenge myself to retain my humanity as a vampire, promethean, or werewolf, why not play Vampire, Promethean, or Werewolf, which are existing games built specifically to tackle these concepts?

What follows are new racial and class archetypes that do an admirable job of pulling players into the genre and giving them options to specialize their character for a horror experience. This is both a benefit and a drawback. In a trend that continues with the book’s feats, characters will be well prepared for a horror experience but significantly less useful elsewhere. Many feats that are key to preventing sanity damage would have no use in a game where the GM does not intend to make heavy use of these rules. The Witch Hunter archetype, for example, gets massive bonuses to resist arcane effects. The resistances are null against divine damage however, making campaigns that do not focus on witches or similar casters inappropriate for such a character.

Strange though it would be to integrate Horror Adventures with other books, this one is filled with nods to other releases. This, for example, is the protagonist from Ultimate Intrigue getting buried alive, for which there are rules in the book

Another feature of the archetypes is how overpoweringly dark many of them are, and how brutal they can be compared to other expansions. For example, Serial Killer is an archetype, and the equipment section has a portion dedicated explicitly to torture devices. I am forced to conclude that Horror Adventures is intended mainly for use by GMs, unless you want the players themselves to go to some disturbing places. Taken that way the book follows through fantastically. The monsters, spells, diseases, and curses leave a GM poised to create an unforgettable horror experience, if still questionably placed in Pathfinder. This staggering array of new tools is the real value of the book. Pages spill over with thematic quest ideas, and despite my earlier misgivings I now can’t help but want to use this book to run a game, even if it means farming ideas for other campaigns.

It does bear saying that Horror Adventures is by no means appropriate for minors. This is a decidedly adult book and makes no concessions when it comes to making itself a thing of disturbing terror. That said, it contains thoughtful and mature sections for GMs and players on expectations going into a horror game to spare discomfort for everyone involved. It stresses communication and self-awareness above self-entitlement and blame-throwing.

I would love a children’s game about paranoia and death, but I acknowledge this is a bad move by most peoples’ scales

The game-mastering section ties everything together with more than extensive rules for more situations than you could ever need. It breaks down multiple subgenres of horror and offers many options for using them in game. This, combined with ever yet more rules for nightmarish locations, cursed items, and fleshwarping (yes, they found space for fleshwarping: molding your body into new forms) ensure you can create some of your most terrifying villains ever. I don’t know when or how but I am certain I will use this to great effect in the future.

Though based on an unintuitive concept and clunky in places, Horror Adventures is filled with resources to fuel horror games for years to come. As long as you stay within a dedicated horror game, this will give you everything you could want in a Pathfinder horror release.

John Farrell is a legal aid attorney specializing in domestic violence, living in West Chester Pennsylvania. You can listen to him travel the weird west as Carrie A. Nation in the Joker's Wild podcast at: https://jokerswildpodcast.weebly.com/
Related Articles: Pathfinder Horror Adventures, Tabletop
Share
Tweet
Share
Submit