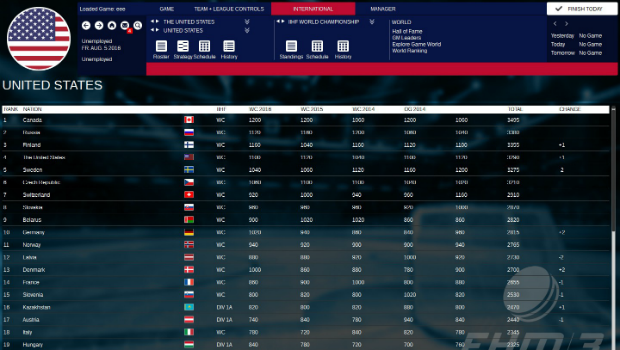 I’ve reviewed the other Franchise Hockey Manager releases in the past, and those reviews still provide a great view into that specific release. If I copied that exact review over to this new one for Franchise Hockey Manager 3, that wouldn’t affect the quality of what I wrote back then, but it would be pretty lazy and cheap to do so, and I bet you wouldn’t want to read it.

So when I played Franchise Hockey Manager 3 expecting some big improvement or change that could merit the release, I came away fairly unhappy to find the game was largely the same as ever, with any improvements being overall lost in the sea of FHM’s extreme high quality.

That’s the catch: Franchise Hockey Manager is a top shelf title amongst the very best in the genre. What’s a game to do when it is not broken, but can’t revolutionize any aspects to differentiate itself from its predecessor? I guess the answer is “just put it out again anyway.” So here we are, one more Franchise Hockey Manager release closer to the sun with little progress to speak of.

It is certainly true that most other sports franchises do this same thing, due to a basic limitation in a game’s mechanics (can’t introduce spaceships to a Canadiens vs. Maple Leafs game, after all.) The fact is that with a game so centrally maintained, rosters and team wise, by an active fan base, and not tied to specific years of play like other games are there is really no reason to put out another entry until you’ve made some definitive changes to the game itself.

Despite this, FHM3 is quite the excellent entry into the ever expanding world of sports simulation. For those unfamiliar, FHM3 places you in the place of the general manager, head coach, or both positions for a hockey squad, be it in the NHL, Canadian minors, or some euroleague developmental squad. Rather than focus on gameplay and controlling the players themselves, you make the micro decisions that can make or break your franchise in short and long term periods.

A game like this is deep in micromanagement options, and FHM3 is definitely no exception. As the general manager, you sign new and existing players, make changes to player roles and how the organization sees them, and various other personnel decisions. You also have the head coaching duties of setting lines, active rosters, overall strategy and in-game planning as well.

The menus you’ll navigate are easy to get through and become second nature to control with just a short amount of use. Since you’ll inevitably spend so much time in these menus, this really is something to appreciate.

The games themselves are pure simulations, which have a basic 2D “game tracker”-esque display as well as play-by-play commentary in text form. You can allow AI to take over here or can make in-game substitutions and even specific changes to strategy for each player. There is a deeper sense of control here than in past titles. The changes made, in particular with player-specific strategy, seem to have a profound effect on the games being played, for better or worse. Fairly the same as before, there are some interesting visual elements added that tell you the team advantage for coach and players, as well as the overall momentum swing at any given time.

This iteration of the Franchise Hockey Manager series is by far the most accessible for casual gamers, and this does open up some opportunity for first time sports-sim fans to get into a game they like with little effort. No longer are you expected to create your own teams, players, and logos (usually community provided facsimiles of real-world teams) and load that all into the game. Licenses, players association agreements, and some very welcome quick-start options make FHM3 a truly inviting title in a genre with a high barrier or entry.

With the quickplay modes you can choose between a “Road to Glory” setup, which tasks you with controlling a team for 30 in-game years to build a career or excellence, or the sandbox mode, which gives you much more overall control on a larger span of time.  Both are fairly similar experiences, but the sandbox version allows for historical seasons to be played.  Going back to the 1930s, you can play these seasons as they occurred and see the differences, or make big changes and sit back to see the ripples of your actions across hockey history.

Franchise Hockey Manager 3 is a fantastically crafted title well worthy of praise. Unfortunately, with this release being a pretty basic retread, there is a prevailing sense of staleness. The game does have some minor improvements that are mostly visible with the streamlined startup process and visual data provided while in-game. Long time fans of the series may not need to update, but any new player looking to try a sports sim would be hard pressed to find a better place to start.

Patrick Rost has been with Gaming Trend since 2013. At first focused on sports coverage, Patrick has gone on to cover a wide range of games and other products for the website. Outside of Gaming Trend, Patrick writes and records music, grinds perpetually in Elder Scrolls Online (PS4), and lives day to day with his two dogs, Bob and Stella.
Related Articles: Franchise Hockey Manager 3
Share
Tweet
Share
Submit