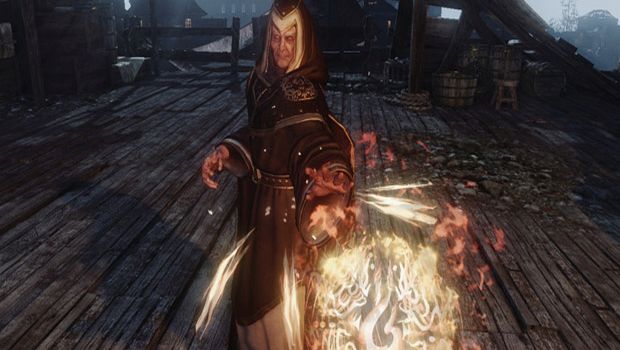 “Customizable” is a very fluid concept in the world of videogames, and it’s certainly been taken more and more advantage of as the technology behind our favorite entertainment grows more powerful. While once the strict trademark of role-players, making and developing your own characters and avatars has become a bit of a hallmark in modern gaming. The depth of how elaborate, expansive, and detailed these malleable options are varies greatly from one title to the next, but only a few choose to truly make it the game’s focus instead of a novelty. Lichdom: Battlemage stands among this number, and despite its rough edges what it gets right is still plenty sharp.

In Lichdom you play the part of the “Dragon”, a villager turned avatar of vengeance, and granted immense mystical power by a mysterious figure called Roth after he finds you beaten and left for dead. Awakening to find the only person you love is now being held captive and your home city under siege by the necromantic Cult of Mathus, you must use your new abilities as the Dragon to put down these dark forces and face whatever destiny comes with them. For despite all your newfound might, it will still be no easy task.

While it does have one, Lichdom doesn’t spend a great deal of time investing you in the story or engaging you in the narrative. Instead it uses its detailed environments, unique concepts and design, and the exceptional voice talents of Troy Baker (Last of Us) and Jennifer Hale (Mass Effect) to break up the action and keep you a little more engaged. While normally I would be among those who’d consider that a missed opportunity, Lichdom makes it clear even from the very beginning that it wants you to just jump in and play. The magic of Lichdom is in its magic, and considering you’re going to spend nearly the entirety of this experience piloting a pair of sparkly hands through this dark fantasy world, it’s really not that big an ask.

Lichdom’s magic system is robust in all the right ways, and functions much more like intricate combat alchemy than “spell customization”. There are several spells you will learn even from the very beginning of the game, each of which has three different forms of function: targeted, area of effect, and defensive. By squeezing your left, right, or both triggers (or mouse buttons) you can engage each of your spells in unique ways to crush your foes and survive a battle. For example, by tapping the right trigger you can launch a bolt of napalm toward your opponent, however, if an enemy gets too close you can hold the left trigger and engage a heated barrier to halve the incoming damage. If you’re feeling confident and erect your barrier just as your enemy is about to land his strike, he’ll be caught in your barrier’s blow-back and be incinerated.

When enemies are defeated, they often release orbs which can be used to customize your spells in a number of ways. These changes to your spells can vary from whether you fire a beam of freezing ice, more potentially charm a foe into your service, decrease their required time to charge, or for the very clever maybe all of the above. The more you use a spell, the more it will independently level-up and the more you can augment it. I never managed to have just one spell that did everything I needed, but considering you can have up to three available to hot-swap between in the heat of battle, that was never actually a problem but more of a personal challenge.

If all else fails, or evasion is more your style, the Dragon has the gift of Blink, a dash move which will quickly dart you a few yards in whatever direction you are moving. This technique allows the Dragon to strafe between enemy attacks and even clusters of foes themselves if need be, but can only be used a few times in succession before it needs to briefly recharge. Blink’s ability to get you out of trouble or into more of it is pretty well balanced and the uneven nature of the terrain makes it hard to abuse. But considering how quickly certain opponents can crush you given the chance, it’s unlikely you’ll find yourself worried how fair you’re being to them. The lack of “radar” or some other type of omni-present awareness for your character can make some fights extra hairy, and that’s when this technique shines the most.

Where Lichdom: Battlemage falls short is in its polish. There are times when it feels a little rushed, like homework you started last night at your desk but didn’t finish until you were on the bus in the morning. Transitions between areas and cut-scenes are extremely abrupt and disorienting, enough so that you may think your game just glitched. Some enemies and NPC’s regularly clip into surroundings, the ground, or even each other… where they will stay, giving you a brief laugh at best or at worst forcing you to reload your save if it obstructs your progress.

Also, while Lichdom isn’t exactly a short game (depending on how much time you spend obsessing about your spell configurations), it’s also not extremely long. This game’s length can mainly be attributed to its static difficulty, which can get pretty tough if you don’t learn how to modify your magic and develop tactics to optimally use it. With no difficulty selection and a fairly linear campaign, as much fun as this game is it won’t exactly call you back for more once the credits roll. Depending on what kind of gamer you are that may or may not be problem, but it’s certainly something to consider.

If your PC can run Lichdom at its maximum settings (in which case I am jealous of you,) it’s absolutely gorgeous. But that’s something that I can’t really say about the music and sound design which is more of a mixed bag. If you’re a fantasy player who likes to get swept up in epic themes and powerful ballads to help immerse you, then you’re better off bringing a playlist own. However, if there has to be one thing about this game I must sternly complain about, I don’t mind a mediocre musical score being it.

Regardless of its easily corrected flaws, Lichdom: Battlemage’s low price point, occasionally brilliant execution, and absolute focus on a niche game-play design, leaves a lot here to like and a lot worse ways to spend your hard earned gaming dollars.

Lichdom: Battlemage is a clever and exciting arcade style action-RPG, which can be a lot more fun than one might expect. The battles are challenging, the magic system is as diverse as advertised, and the play mechanics do a pretty good job pulling it all together. A few rough edges here and there, in combination with the game’s high requirements can lead to some embarrassing hiccups and broken moments, but it’s nothing that gets in the way of the overall experience. Hopefully future installments will dare to flesh out what this title lacks, but what Xaviant focused on this time around they really managed to deliver.