Wave Break is a weird experience for me. On one hand, it’s a great Stadia exclusive with a killer soundtrack and a slick aesthetic that pays homage to the skateboarding games of old. On the other, it’s also excruciatingly difficult with an arcade game approach to its learning curve that I can’t seem to get used to. I feel like this is a game that you need to know what you’re getting into in order to enjoy it, but for those willing to put in the time, it’s a thrill ride. 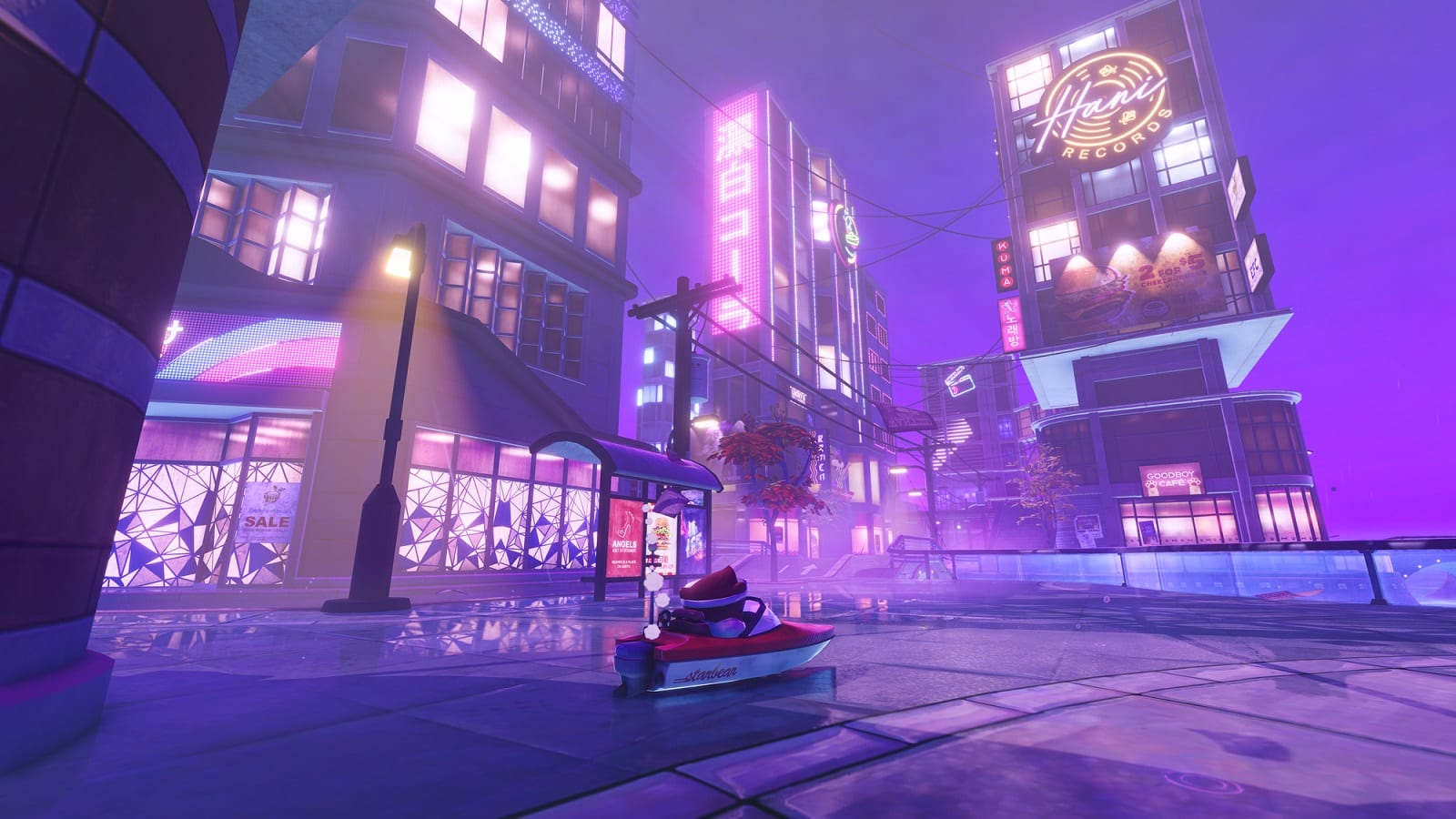 Wave Break takes place across four different venues in a colorful yet gritty 80s setting. You’ll be controlling foul-mouthed but adorable animals as you kickflip, grind, and even shoot your foes in a boat; this skateboarding boat method is the meat of the game, which lends itself to something like Tony Hawk Pro Skater. By utilizing your controller’s face buttons and triggers, you can pull off a variety of tricks which you’ll use to chain combos and gain points. While there are plenty of point-based goals which will earn you in-game cash that you can use for your character or boat, there are some location-based goals that will require you to explore the venue you’re in.

If you’re wondering where I tell you about the main control scheme and some tips about approaching the game, well… you’re not gonna get them here. Wave Break feels like an arcade game, for better or worse, and unfortunately if it doesn’t click for you, it’ll head into the latter territory. I can see where the developers were going with this “learn as you go” approach (and there are loading screen tips as well), but this is a very complicated title when it comes to learning the controls. I know it’s a nod to the classic Tony Hawk Pro Skater games, but here’s the thing: Adding gunplay makes this a whole lot more confusing.

Oh right, you have a gun. 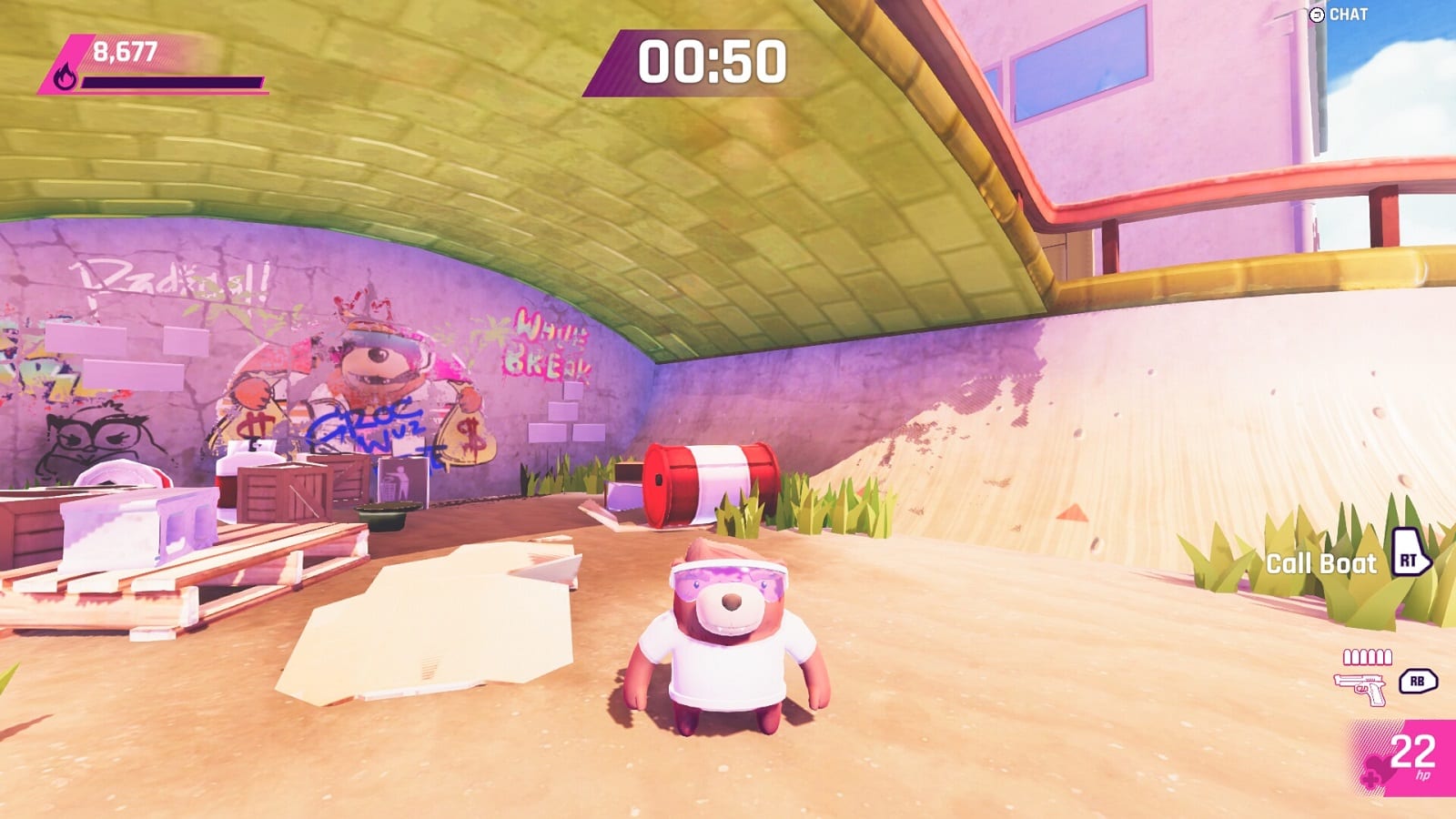 In a pastiche of 80s vaporwave and crime movies, you control a camaraderie of cute crooks, and you’ll need to do missions that involve criminal activity, which is a neat little twist from the whole skateboarding genre. That said, adding a third-person shooter element in the game is an innovative way of making Wave Break stand out, but on the other hand, it just means more to process. Unfortunately, while the boating mechanics are great when they work, the shooting mechanics are another story entirely. Bullets don’t feel like they hit properly, and there were times when I self-destructed instead of hitting an opponent because I did a bullet-time trick and shot an explosive barrel by accident. It’s a mix of two genres that doesn’t play nice, and that’s with the steep learning curve of just driving your boat and doing freestyle tricks.

While I might not appreciate the unfairly high difficulty when starting out, I can appreciate the lovely aesthetic that Wave Break exudes. I likened it to 80s vaporwave and boy does it show: It’s a glamorous world full of cute critters and it runs in 60 FPS. (This makes the explosions, optional cursing, and splotches of blood a bit off-putting, but it’s an entertaining contrast). I really dig the style of the game, and if you only bought the game for the presentation alone, I wouldn’t blame you. 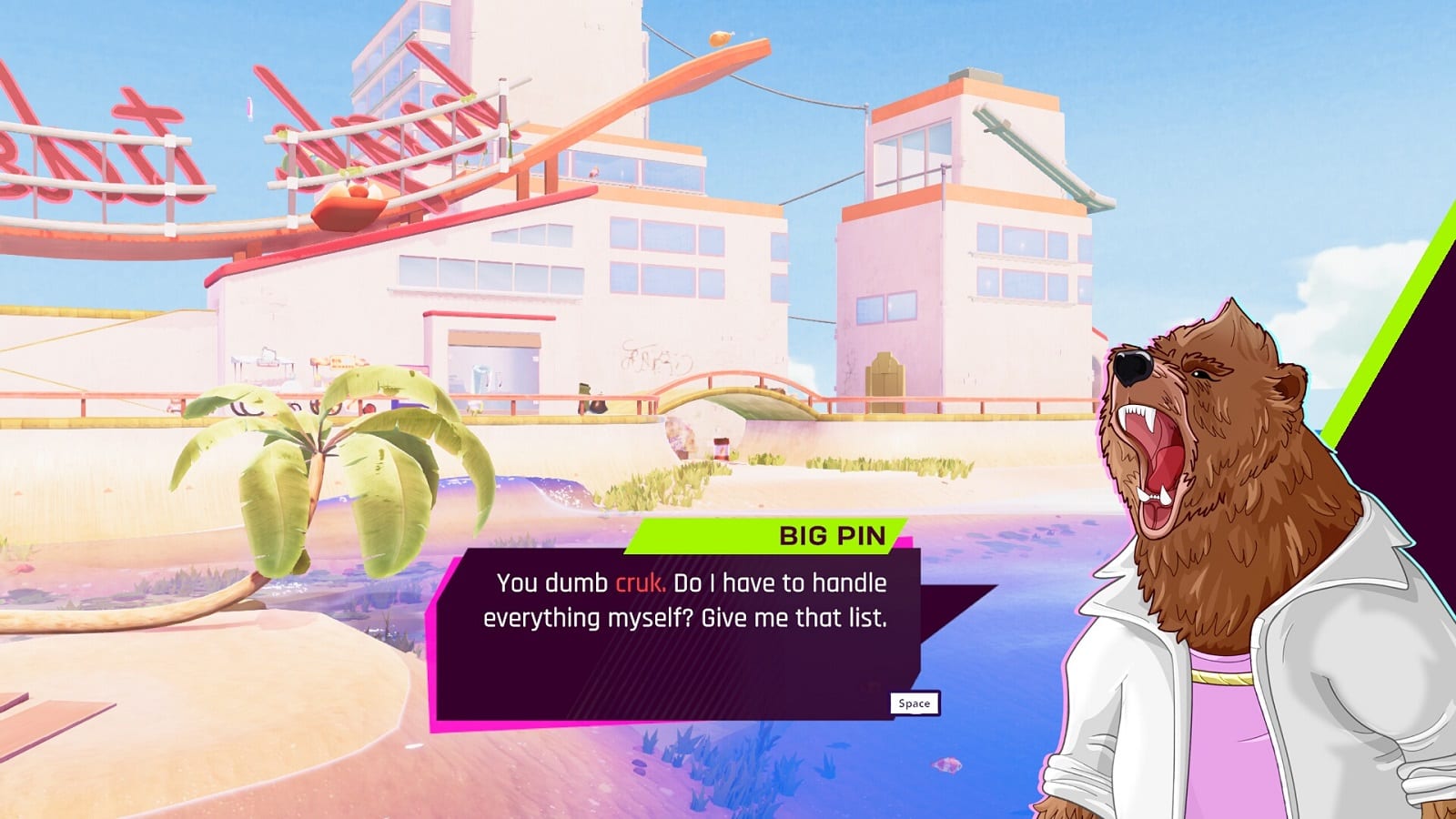 However, while there is surprisingly a lot of content within the single player campaign, multiplayer is currently barren, and your only hope to play online is to get some friends to play private matches at this point. This is more a problem with Stadia’s infrastructure, but I’ve never had a problem when playing random matchmaking in Marvel’s Avengers or Super Bomberman R Online, and the latter is also a Stadia exclusive, so take that as you will. If you can find a group to play with, however, Wave Break is an enjoyable experience with others.

If you love a "totally radical!" style and want to lay down some “skateboating” tricks, Wave Break is the game for you. While the high learning curve and nonexistent online base may turn off casual players, Stadia fans that want a fun little game on the platform should check this one out.

Elisha Deogracias is an aspiring accountant by day, freelance writer by night. Before writing for Gaming Trend, he had a small gig on the now defunct Examiner. When not being a third wheel with his best friends on dates or yearning for some closure on Pushing Daisies, he's busy catching up on shonen manga and wacky rhythm games. Mains R.O.B. in Smash. Still doesn't know if he's a kid or a squid.
Related Articles: Indies, Wave Break
Share
Tweet
Share
Submit