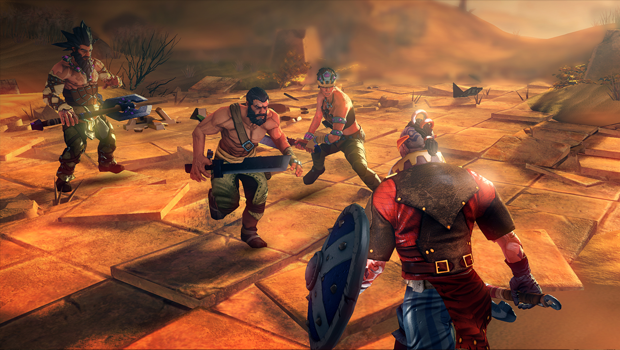 Slicing your way through enemy hordes beat ‘em up style is a blast, but sometimes I want to relax and play a simple card game.  Indie developer Defiant Development says, “Why not both?” with Hand of Fate, the hack and slasher with collectible card game elements.

Hand of Fate plays out like two games, each one directly affecting the other.  One has players moving a token through a dungeon made up of face-down cards while a mysterious figure narrates their moves from across the table.  Each card represents an encounter, which, after some careful decision making on the player’s part, is often where game number two starts, which plays like a beat ‘em up with combat akin to the Arkham series, featuring combos, counters, and lots of dodge-rolling.

Early on, much of Hand of Fate’s combat is extremely simple, but as more and more varied enemies get layered on, every battle becomes a life or death skirmish.  Players need to use their wits, as well as the pieces of equipment they gain throughout their adventure, in order to survive the trials of the perils of the dungeon.

It’s not all combat, though.  Occasionally the enigmatic cardmaster will turn over a card and on it, instead of an enemy, is an opportunity.  Opportunity encounters present players with a few options, each one having benefits and disadvantages.  Will you give up some of your food to a hungry priest in exchange for a random blessing?  What about the goblin crudely disguised as a human who demands some of your gold?  Each of these encounters plays out exclusively in text, but the event descriptions build a world in players’ minds, much like in traditional tabletop games such as Dungeons and Dragons.

After most encounter cards are resolved, players can receive resources that can help them either in combat, such as a new weapon or armor, or in the card game portion, such as with food.  It’s the way these resources interact with the hack and slasher portion of Hand of Fate that is so novel.  As you progress across cards, the player consumes food.  Run out of food, and every move will dock 10 hit points from your current total.  The desperate search for food affects combat directly in a meaningful way.

Certain cards allow players to collect tokens, which, at the end of a play session, can be turned in for extra cards for use in the customizable deck. Card effects are kept secret until you draw them, so even after unlocking a new piece of armor or encounter, players can only guess what the card does based on its simple drawing and the name printed at the bottom.  The sense of wonder created by adding an unknown, but powerful-seeming card to your deck is absurdly exciting.

Even after dying without killing the dealer’s champion at the end of the dungeon, effectively failing your quest, you can still collect the booster packs for encounters you have completed.  This makes  defeat feel less crushing, which is nice since you’ll probably be dying a lot.

The most frustrating aspect of Hand of Fate might be that those losses will sometimes feel like they were completely out of your control.  The combat maps later on are small and often cramped with traps.  Add to the mix up to a dozen enemies, and there’s not even enough room to shake a stick without getting thwacked over the head from some unseen spot.  The camera, which moves freely of the player’s control, sometimes decides to zoom in, usually when a trap lies just around the corner.  The framerate also drops severely on PS4 when the amount of enemies on screen approach the maximum and equipment with particle effects are added to the mix.  One time I had to forfeit the game because swinging an axe had become too burdensome a task for my PS4 while it was rendering 6 rat men and a few mages.  The PC version holds a stable framerate on a moderately-equipped device — ours sported a nVidia GeForce 770 GTX in this case.

Even with its technical hitches, Hand of Fate still captivates, even after completing its story.  The game has an endless mode, which scores players based on how long they can stay alive traversing the perils of a never ending dungeon.  The game keeps you guessing what card will come next, and you’ll want to play one more time just to see what it’ll throw at you next.

While Hand of Fate can get aggravating, the novelty and personality oozing through it is undeniably alluring.  The game’s simple but satisfying combat and risk versus reward card game will have you coming back for one more hand, waiting for your luck to turn around.

Spencer Campbell has summited many mountains just to shout, “Video games are for nerds!!” After extensive scientific testing, he has concluded that they are. He plans on accepting his Nobel Prize as soon as the dorks in Sweden return his calls.
Related Articles: Hand of Fate
Share
Tweet
Share
Submit