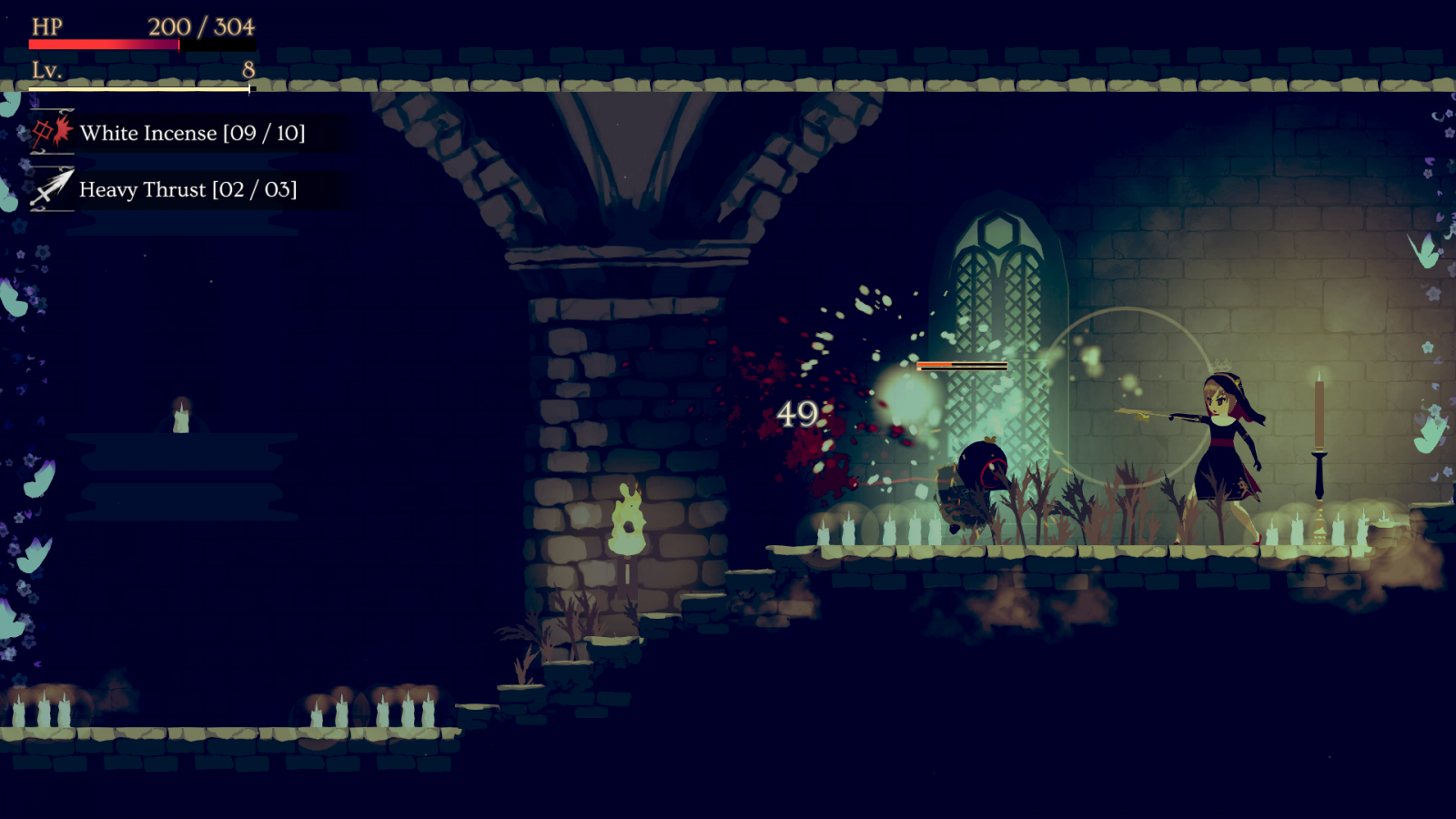 Change is a necessary, but often painful, part of life, especially in creative endeavors. After 2016’s Momodora: Reverie Under the Moonlight — a cult classic and the best entry in the four-game Momodora series — the easy thing would have been for developer Bombservice to release another Momodora game that built on its success. Instead, the studio turned to a new project, Minoria, which borrows heavily from its earlier series, staying true to its Metroidvania roots while still standing apart in everything from its music and art style to combat and story. While I don’t think the experiment is nearly as successful as the latter Momodora games, it’s still an admirable step for the studio and a direction that it could explore further in the future.

In Minoria, you play as Sister Semilla, a nun sent by the Sacred Office to root out an infestation of witches in the capital of Ramezia. The queen is dead, the princess has been kidnapped, the dead have risen from their graves — it’s a whole thing. Though your character is the stoic silent type, she’s accompanied by Sister Fran, her more talkative and emotional ally. At the very beginning of the game, you meet two of the witches who are responsible for the mayhem at the castle, who immediately start laying the groundwork for the game’s story. The witches are planning some kind of ritual, and the Sacred Office has sent its crusaders to stop them, burning entire villages to the ground on their way. 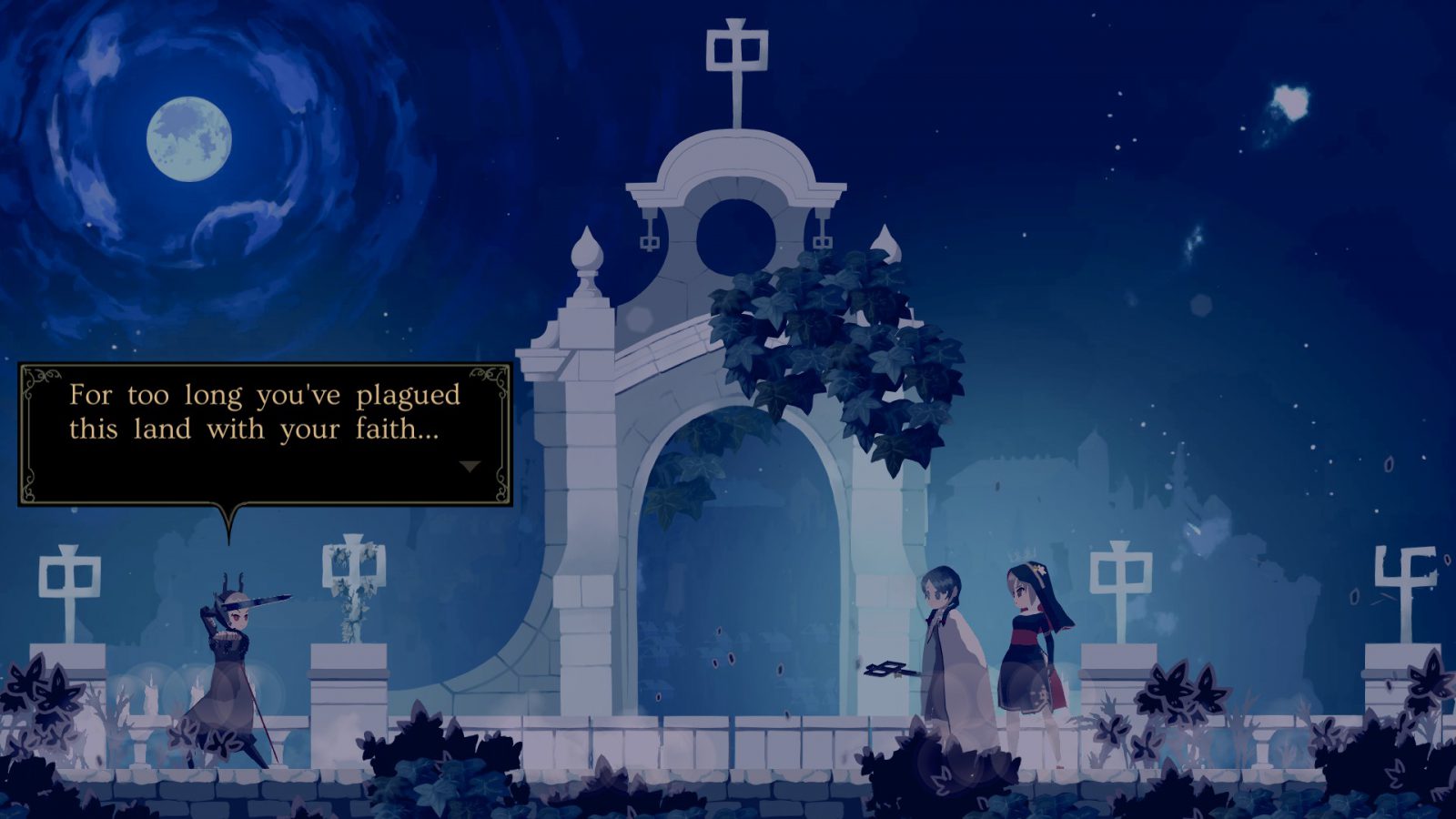 Aside from a few cutscenes and comments from Sister Fran (which you can trigger at any time, though she doesn’t have much to say), the story is mostly told through notes you find throughout the environment. There’s some interesting detail put into the world, and a promising basic premise, but none of it is developed very much. The big late-game “reveal” is telegraphed from the very first conversation, when your opponent suggests that maybe the religious zealots perpetrating mass murder of nonbelievers aren’t entirely in the right. Nonetheless, it’s rewarding to find scraps of information as you travel that spell out the exact circumstances of the church and its army of bloodthirsty nuns.

Story isn’t the main draw in Minoria, anyway. You could describe Minoria as a Metroidvania, but it doesn’t fully commit to all the pillars of that genre that you might expect. There are a few abilities you learn that let you traverse new areas, but they’re mainly intended for combat and there are only a few spots that you actually need them to access. Progress is mostly gated by locked doors, the keys to which you find by following a fairly linear path through the game. You do a good bit of exploration in Minoria, but it doesn’t scratch quite the same itch as traditional Metroidvanias. Progressing through the game is also hindered by the lack of direction it gives you. Several times throughout the game, you’ll be told that you need to go to a certain location to progress, with no indication of where that place might be. Your map is also extremely barebones, showing only the shape of the rooms, so there’s no way to get a sense of where different areas connect to each other, or what it was keeping you from passing through a particular door. The result is that a lot of Minoria’s exploration feels more like aimless wandering. 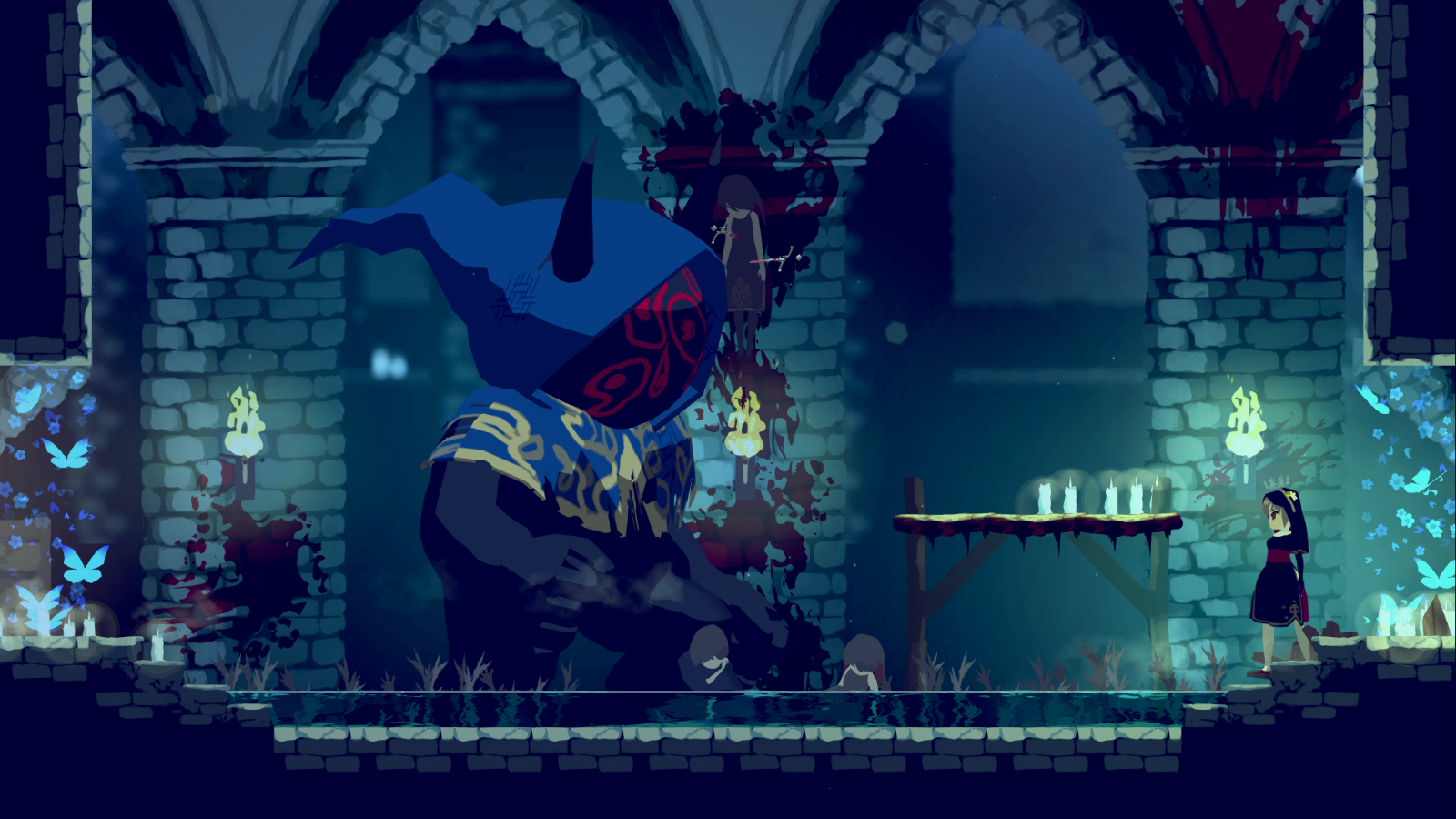 I would describe Minoria as more of an action platformer than a Metroidvania. Combat is the core of this game, and the fundamentals feel fantastic. You’ll pick up just a few different swords in this game to serve as your main weapon, but they do vary in their attack patterns. Each swing of the sword feels great, with an eye-catching animation and a satisfying thump when it connects with an enemy. On top of your basic combo, you can attack in mid-air, and early on you can find a charge attack that hits for massive damage if you hold down the attack button for a few seconds. Later in the game, you’ll unlock a couple other aerial attacks.

Your defensive capabilities come down to dodging and parrying. Dodging is easy and reliable — you can even dodge roll through entire screens if you just need to make a getaway — while parrying is a riskier but far more satisfying option. A successful parry will let you unleash a counterattack or simply block attacks that can’t be countered. You can even block mid-air, which really comes in handy against ranged enemies and in certain boss fights. 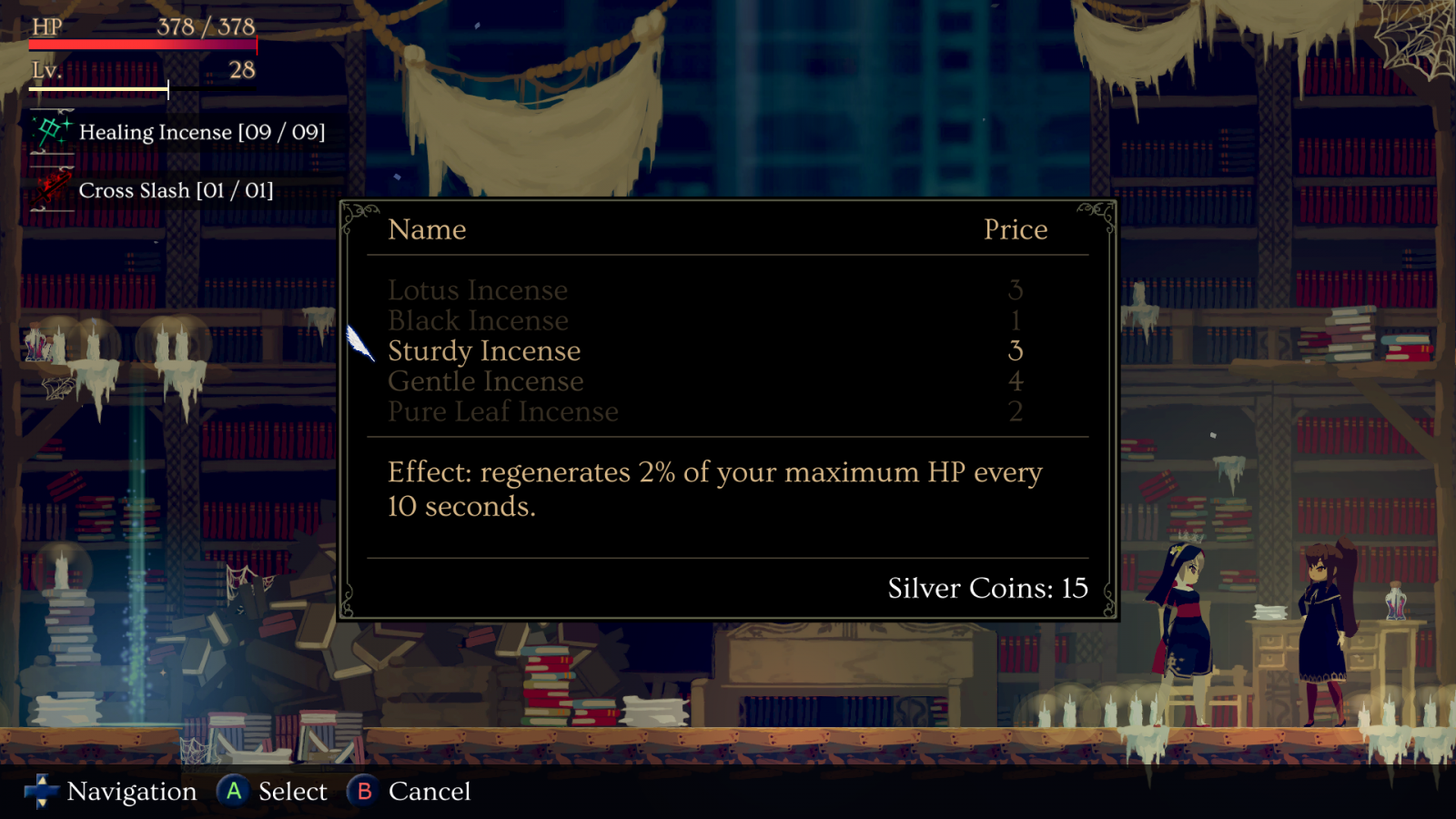 Rounding out your combat abilities are Incenses: equippable magic powers with a variety of effects. Passive Incenses might provide damage reduction or improve your healing abilities, while active ones attack with lightning bolts and flames or heal and buff your character.

It all sounds good on paper, but the way all the elements of combat come together is lacking. A lot of the problems with Minoria’s combat come down to visibility. There’s a lot going on onscreen during fights in this game. Attacks have flashy, gorgeous animations that can sometimes obscure the action. Enemy attacks can also be hard to read, having little or no wind-up, and with several attacking at once, it gets far too hectic to follow. Minoria’s solution is to use white and red circles emanating from enemies whose attacks you need to block or dodge, but even those cues can be hard to follow when they’re mixed with particle effects from spells, environmental hazards, and enemies standing in front of each other keeping you from seeing the action. 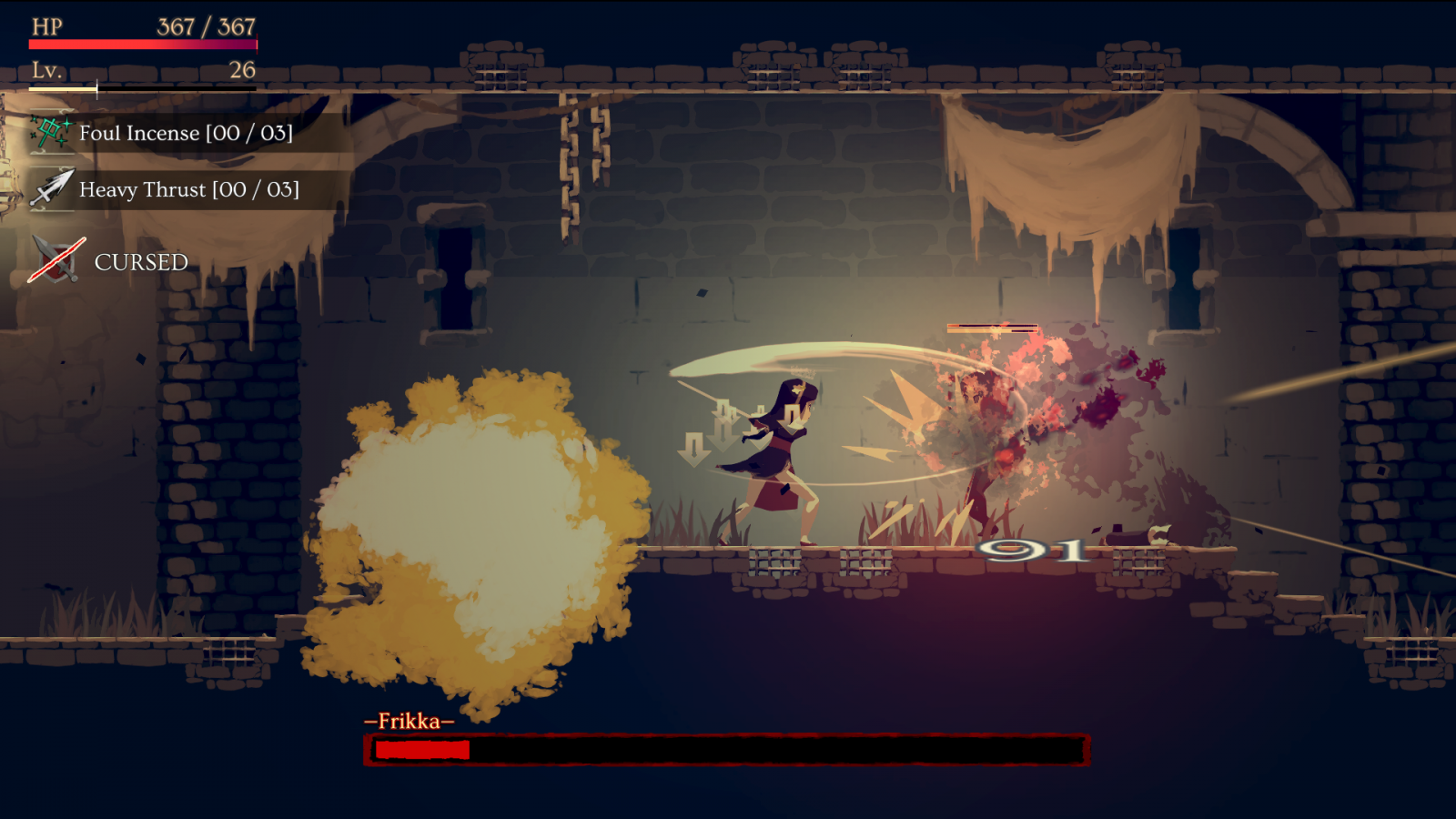 All the visual confusion just compounds how difficult it is to avoid taking damage at times. Your character is hurt not only by being hit by an enemy attack but also by just touching an enemy. When you’re surrounded by enemies, it becomes nearly impossible to get to safety, as you’ll take damage by rolling through enemies if you don’t aim your dodges for the precise gaps between them and time it perfectly so that you only touch them when your dodge grants you invincibility. I’ve also had instances where I parried an attack successfully, triggering the counterattack, and took damage anyway. Considering that most of the time you’ll die in 2-3 hits, fighting against more than one enemy at a time feels more frustrating more often than it does challenging.

That’s also true for bosses, most of whom have an attack that can kill you in one hit. Boss fights tend to be quite long, as you have to carefully balance offense and defense to avoid being wiped out instantly, which only makes it feel worse when you fail to dodge an instant-kill attack with the boss nearly defeated. Most boss fights are one-on-one duels with roughly humanoid foes, and the basics of combat really shine in these encounters. Once you’ve learned their tricks, dodging and parrying your way through these fights and hacking your magically charged opponents to bits feels incredible. These boss fights are also where the issues with the Incense system become the most apparent, though. Each Incense has a certain number of charges, but they can be swapped on the fly, so you can use one up then just open the menu and swap to the next. There’s also not much variation between them, most just being some type of ranged damage, so you can start each boss fight by just burning through all the charges on each of your offensive Incenses, then forgetting about all but the healing spells for the rest of the fight. 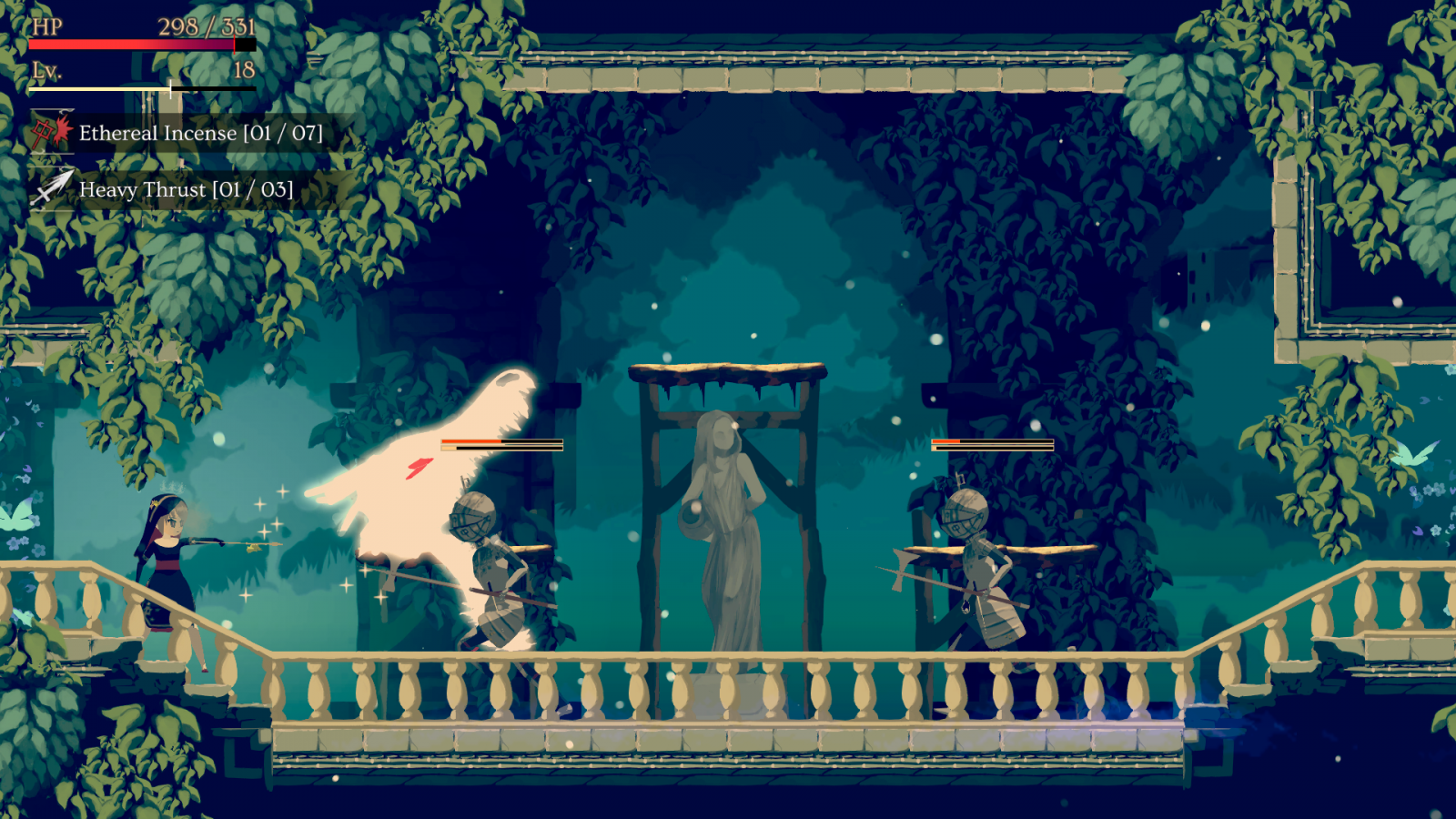 Aside from the sometimes difficult to read cues during combat, Minoria is a great looking game. It took me a while to get used to its style, but there are some excellent looking environments in this game, and the character models are great, even though I’m still not sold on some of its animations. The music that underscores it is equally impressive. A melancholy piano score is a bold choice for an action game, but it really sets the right tone for Minoria, and makes the moments when it expands into more lively fare stand out that much more.

There’s definitely fun to be had in Minoria; it’s just diminished by the game’s more frustrating aspects. Fighting your way through Ramezia’s castle is challenging and packed with secrets and detours, even if the journey doesn’t add up to much. If you’re looking for a tough 2D platformer with some great swordplay, though, it’s still worth checking out.

Minoria may not be Bombservice’s best game to date, but it may still be worth a look for action platformer fans looking for a challenge. Though its combat feels more frustrating than satisfying at times, the fundamentals of its swordplay are still solid. Add to that its excellent art and music, and there’s a lot to like here if you can overlook its underdeveloped story and exploration.

A committed indoor kid, Bryan moved from Pittsburgh to Los Angeles for a prettier landscape to ignore. They can be lured outside with promises of taco trucks and film festivals, and enjoy trawling through used book stores for works on the occult. Bryan has been gaming since the SNES era and is a sucker for good pixel art.
Related Articles: Indies, Minoria
Share
Tweet
Share
Submit